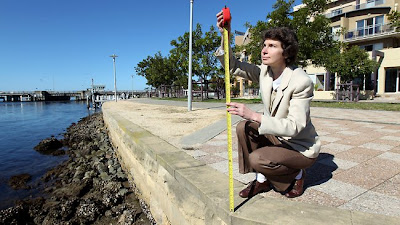 Newcastle architect Janet Henriksen shows the new height regulation brought in by Lake Macquarie City Council to take into account projected sea-level rises. Picture: James Croucher Source: The Australian
The current discussions concerning climate change, global warning and carbon tax have not mentioned a significant matter that is already a problem for many, an issue that was the subject of an article in The Australian last Saturday.  The article is entitled “Anger rises ahead of the sea” and it can be read at:
http://www.theaustralian.com.au/national-affairs/climate/anger-rises-ahead-of-the-sea/story-e6frg6xf-1226103792941
The summary for the article reads “Confusion between all tiers of government is causing angst for homeowners on the coast”.
Some comments:
·         Australia has 3 levels of government:
o   Federal (that is, the government in Canberra which has Australia wide power in respect of only those matters allocated to it in the Commonwealth Constitution eg defence, foreign affairs, marriage, companies);
o   State (that is, the governments of each Australian state, which exercise the rest of the lawmaking powers, the laws varying from state to state);
o   Local (that is, the local councils, which traditionally have been responsible for the 3 R’s: roads, rates and rubbish).
·         The federal government has warned that there will be expected rises in sea levels over the next 90 years.  At the high end of projections, this will be a 1.1m increase.
·         Such an increase in sea levels could damage or destroy 274,000 Australian coastal homes.  In addition, almost 15,000 commercial or industrial buildings and 35,000 kilometres of road and rail will be similarly affected, with a damages bill of $226 billion.
·         Both federal and state governments have directed local councils to address the issue of expected sea level rises.  They have not, however, told the councils (there are in excess of 100 coastal councils in Australia) what to do or provided a uniformity of approach.  Instead. It has been left to the individual councils to determine and implement what to do and how to do it, resulting in quite marked differences from council to council.
·         One of the ways in which councils have addressed the issue is by disclosure in Section 149 Certificates.  These are certificates issued by local councils upon application which provide information about planning controls and affectations about properties within that council’s area.  The information provided includes the zoning of the property, the relevant state, regional and local planning controls and other property affectations such as land contamination and road widening.  Such a certificate is a compulsory inclusion in contracts to sell a property.
Some councils have included warnings in 149’s for coastal properties to the effect that the property may be adversely affected by future sea level increase.  Gosford Council, for instance, includes the warning for the 9,000 coastal and lakeside homes within its area.
Some consequences and consumer complaints in respect of council sea-level warnings:
o  coastal property values have suddenly and significantly decreased;
o   one home owner received such an adverse valuation on her home that a bank refused to proceed with a loan on the security of the home;
o   another home owner complained that his insurance premium tripled because of the adverse notification and he can no longer afford flood cover;
o   still another home owner has had his home on the market for 18 months and blames the sea-level warnings in the 149 Certificate as the cause for being unable to sell.
·         Other responses by local councils have been to rezone coastal land and to implement restrictions on residential and commercial properties so as to require building higher off the ground.  This has been done by Lake Macquarie and Newcastle Councils.
Some consequences and consumer complaints in respect of council sea-level warnings:
o   A Newcastle architect lost two potential clients who wanted to build a shopping complex near a local waterfront.  They walked away when they found out that to comply with council sea-level rise development standards, they would have to elevate the site so that the floor would be at about eye level.  The developer’s comment was that “If that’s the case then the whole place will be like Venice.”
o   Lake Macquarie Council has also introduced detailed and stri8ct planning provisions, including increased height requirements. Anyone who wants to build or redevelop a property within 3m of sea level is required to address sea rise issues.
·         The above issues are causing angst and adverse consequences here and now.  One of the causes of criticism, however, is that the council responses are based on speculative modelling and imprecise projections.
According to the chief executive of the Property Council of Australia Peter Verwer: “Everybody is just going at this problem independently and this ad hoc approach is the worst possible way to deal with it.  Houses are being tagged as being at risk from sea rise by local councils, based on what is, essentially, Googled research. This is a national issue which needs a national framework."
·         Another criticism is that no guidance has been given to the councils as to what projections to adopt.  Queensland and Victoria have adopted a projected rise of 80cm by 2100, NSW a 90cm rise, South Australia a 1m rise and Western Australia a 38cm rise.
·         Further, projections present low, middle and high rise scenarios. Inevitably the councils are adopting the high level, worst case scenario to avoid potential legal liability.  The philosophy is that it is easier to be pessimistic and relax than to be optimistic and be sued.
·         Although there is agitation for more government involvement, more precise direction and greater, reliable information, councils have to deal with the issue right now.
The comment by the article’s author is appropriate:
“. . . in doing so they are also clashing with many young families, pensioners. small business owners and developers who object to their livelihoods being threatened on the basis of projections that, even the government admits, are little more than an educated guess.”