Cussons Imperial Leather has revived its 1970’s advertising theme based on the phrase “Simon, Tahiti”.  You know the ad, the one where Mum, Dad and the rugrat are in a really swanky bathroom with the rude bits conveniently obscured, Mum says “Tahiti looks nice”, Dad picks up the phone and says “Simon, Tahiti” and you then realise that they’re in a private jumbo.  As the plane banks, it causes the water in the kid’s bath to tip and the swan to slide.
See the ad at:
http://www.youtube.com/watch?v=Q0Dn5k_MtZM
The original 1978 ad can be viewed at:
http://www.youtube.com/watch?v=vLj0FV_ZS74
I actually like the first one better but that’s another issue.
When the new ad first came on, I asked my wife why anyone would want to put a swan in a bath.  She said that it was artisitic, indicative of luxury.
When my brothers and I were youngsters, my brother Rudy kept a mini farm of animals:  sheep, goats, Chinese Silky chickens, Bantam chickens, ordinary chickens, geese and ducks.  Let me tell you, ducks can quickly turn a place foul, no pun intended.
Years later I lived at Glenbrook, opposite a beautiful, large lagoon.  It was a haven for wildlife and in pristine condition.  Then someone dumped some domestic ducks there.  People who came to the lagoon thought they were cute and came back with bread for them.  The ducks bred, some more were left there.  Soon the area where people came was covered in duck crap, the water was fouled and the wildlife was taken over by the introduced domestic ducks.  I went back a year or two ago for a visit and it was still the same, although I understand that there are serious regeneration works in progress. 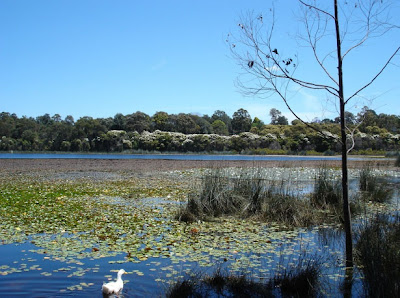 Glenbrook Lagoon
If swans are anything like ducks, and I can’t imagine why they would not be, that swan in the ad will be crapping in the bath and all over the tiles, plus they have nasty dispositions.
What the Dad should be saying in the Cussons ad is “Simon, roast bird for dinner.”

Posted by BytesMaster at 1:34 AM