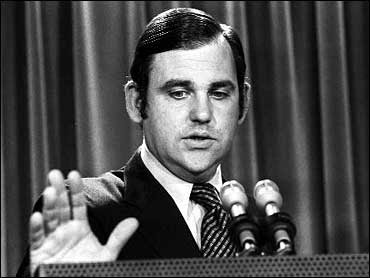 "This is the operative statement. The others are inoperative."

When working in the office recently I gave some facts in a matter to my son.  He said to me that those facts were different to the facts that I had previously given him.  I replied that these facts were the operative facts; the others were inoperative.  In making that comment, I was facetiously paraphrasing Ron Ziegler, a man unknown to my son but a true footnote to history.

Ronald Louis "Ron" Ziegler (1939 – 2003) was White House Press Secretary and Assistant to the President during the administration of President Richard Nixon between 1969 and 1974.

Fiercely loyal to Nixon to the end, he became a buffer between the President and a hostile press corps as the developing Watergate scandal began to bite deeper, eventually reaching into the White House and ultimately even the Oval Office itself.  In that time Ziegler became the public face of the embattled Nixon administration and a source of public and journalistic bemusement, his befuddled speaking style and constant changes earning him the nick name of “Zig-Zag”.  One magazine called his style of speech “Zieglerrata”.

There is no doubt that he was tarnished by his loyalty to Nixon, that he became the focus of anti-Nixon hostility and that his abilities were overshadowed by his defence of the Nixon administration during Watergate.  According Gerald Warren, a former deputy press secretary under Presidents Nixon and Ford: "I think he was placed in an awkward position as a young man. ... It wasn't easy for him, but he did his best and he was very loyal.  I don't think he ever showed the great promise that he had, I wish that he had been able to tell his story to the world."

"This is the operative statement. The others are inoperative."
–        April 17, 1973, retracting previous statements that had been revealed to be false.

According to The Guardian, reporting the death of Ron Ziegler in 2003:

During his career as US President Richard Nixon's press secretary, Ron Ziegler, who has died after a heart attack aged 63, delivered thousands of White House statements. But the only one that reverberates down the years came on April 17 1973, and consisted of two short sentences: "This is the operative statement. The others are inoperative."

This pronouncement signalled the first breach in the wall of lies and evasions that the Nixon administration had erected around the break-in at the Watergate headquarters of the Democratic national committee in June 1972. After months of press revelations and congressional investigation of official corruption, the president had finally given in, ordering his staff to give evidence to the US senate and lifting their immunity from prosecution. In response, his press secretary simply junked all his previous statements on the issue.

"Certain elements may try to stretch the Watergate burglary beyond what it is."
–        1972, referring to Washington Post reporters Carl Bernstein and Bob Woodward

'I think we would all have to say, and I would be, I think, remiss if I did not say, that mistakes were made during this period in terms of comments that were made, perhaps. I would say that I was overenthusiastic at the time in my comments about The Post, particularly if you look at it in the context of the developments that have taken place. In thinking of it at this point in time, yes, I would apologize to The Post. . . . When we're wrong, we're wrong.''
-       May 1, 1973, the day after H. R. Haldeman, the White House chief of staff, and John D. Ehrlichman, the chief domestic policy adviser, resigned over Watergate, when Ziegler was asked whether he would apologise to The Post.
When he started to add, ''But . . .'' a reporter called out, ''Don't take it back, Ron!''

''I would feel that most of the conversations that took place in those areas of the White House that did have the recording system would, in almost their entirety, be in existence, but the special prosecutor, the court, and, I think, the American people are sufficiently familiar with the recording system to know where the recording devices existed, and to know the situation in terms of the recording process, but I feel, although the process has not been undertaken yet in preparation of the material to abide by the court decision, really, what the answer to that question is.''
-       1974, a statement by Ziegler on the safeguarding of the White House tapes, winning an award from the Committee on Public Doublespeak of the National Council of Teachers of English.

"Devoted service to the cause of peaceful progress in an orderly world (which) will remain as an example for free men everywhere.”
- 1970, in reference to the career of CIA security adviser Dan Mitrione, killed in Uruguay, whose promotion of torture later became substantiated. 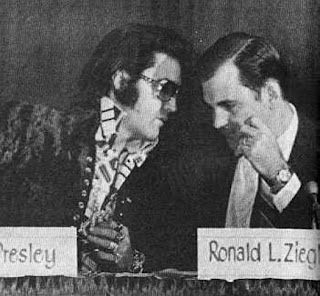 Ziegler with Elvis Presley, 1971, at a meeting of the US Jaycees Congress of Ten Outstanding Young Men.  Presley and Ziegler were two of the honourees.

Posted by BytesMaster at 9:21 PM