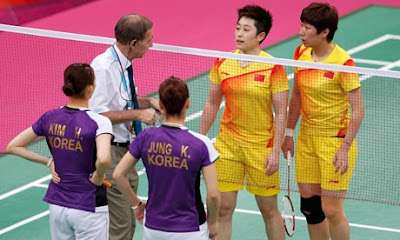 Eight female Olympic badminton players have been disqualified for deliberately trying to lose their preliminary-round matches.  The players – two from China (the gold medal favourites), four from Korea and two from Indonesia - lost the rounds on purpose in order to enter the knockout round with a lower seeding, thereby avoiding having to compete against a more talented team early in the tournament.


The head coach of South Korea, Sung Han-kook, admitted his doubles players threw their games, but only after the Chinese started playing to lose.  "The Chinese started this. They did it first," Reuters quoted Sung as saying.


At least one commentator has asked whether the above is cheating or strategising, pointing out that the Japanese women’s soccer team was instructed to not score in their final group game Tuesday against South Africa, which gave them a more favourable match-up in the next round. Michael Phelps admitted to not swimming his best in the trials to save energy. Yet officials issued no punishment in these two situations.   Whether it is strategy or cheating is a discussion for another time.


The fact of the players and coaches seeking to take advantage of the rules by deliberately losing brought to mind two famous, or more aptly infamous, examples.  If they weren’t true one would be forgiven for thinking that they are episodes from a Monty Python movie.


The first part of the World Cup (football for the purists, soccer for the argumentative) is the group stage. Each group has four teams that play each other, with three points for a win, one point for a draw and no points for a loss. The top two teams advance past the group stage and the bracket continues with single-elimination games.


These days the 4 teams in the group play simultaneously, so that advancing to the next group depends not only on a team’s own performance but also on the outcomes of the other games.


That was not the case in 1982.  At that time matches were played sequentially, one after the other, so that teams were aware of the standings of other teams and points needed to advance.  In addition, bizarre rules that related to the number of goals scored also affected the outcomes.


In the last match of the 1982 FIFA World Cup, Group B, West Germany was to meet Austria.  A West German victory by 1 or 2 goals would result in both teams advancing to the next group.   If Germany scored less goals than that, it was out; any more and Austria was out, with Algeria advancing.


When Germany and Algeria had met earlier in the group matches.  It had been expected that a German win was a certainty, Germany being the reigning world champions with a squad containing numerous internationals and elite players.  Algeria, a country which had never previously been to a World Cup, prohibited its players from leaving the country before age 28.


The Germans were so confident of victory that one German player declared at the press conference before the match that "We will dedicate our seventh goal to our wives, and the eighth to our dogs.”  Another stated that he would play the game with a cigar in his mouth


In the shock upset of the Cup, Algeria defeated Germany 2-1.


In the match between Germany and Austria, Germany scored after 10 minutes to make the score 1-0. 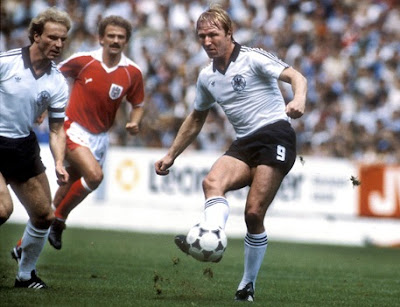 
According to a commentary on that match from The Guardian in 2010:


In the 10th minute of that match Horst Hrubesch put the Germans in front. Then … nothing happened. Realising the scoreline suited both of them, Germany and Austria effectively stopped playing. In the ensuing 80 minutes there were no shots, and barely any tackles, crosses or sprints. The game was no longer a contest, it was a conspiracy. The teams' cynicism provoked universal scorn.


A smattering of Algerian fans in the Gijón crowd burned peseta notes to show their suspicions of corruption, while most of the Spaniards in attendance waved hankies throughout the second half in a traditional display of disdain. The next day newspapers in Spain denounced "El Anschluss" and there was outrage in Wst Germany and Austria too. Eberhard Stanjek, commentating for the German channel ARD, almost sobbed during the match as he lamented: "What is happening here is disgraceful and has nothing to do with football. You can say what you like, but not every end justifies the means." The Austrian commentator, meanwhile, told viewers to turn off their sets and refused to speak for the last half-hour. Former West German international Willi Schulz branded the German players "gangsters".


The gangsters, however, were unapologetic. When German fans gathered at the team hotel to protest, the players responded by throwing water bombs at them from their balconies.


Even less bothered was the head of the Austrian delegation, Hans Tschak, who made these extraordinary comments: "Naturally today's game was played tactically. But if 10,000 'sons of the desert' here in the stadium want to trigger a scandal because of this it just goes to show that they have too few schools. Some sheikh comes out of an oasis, is allowed to get a sniff of World Cup air after 300 years and thinks he's entitled to open his gob."


Did the Algerian players take offence? Not at all, Merzekane [the Algerian fullback] says. "We weren't angry, we were cool," he says. "To see two big powers debasing themselves in order to eliminate us was a tribute to Algeria. They progressed with dishonour, we went out with our heads held high."


From all over the world came calls for Fifa to punish the Europeans or stage a replay, but in the end all the world's governing body did was rule that henceforth the last pair of games in every group must be played simultaneously. "Our performances forced Fifa to make that change, and that was even better than a victory," Belloumi says. "It meant that Algeria left an indelible mark on football history."


And the ultimate winner?  Italy defeated West Germany 3-1 in the final.


If the previous game seemed bizarre and unsportsmanlike, the following item will pale that in comparison.


The Shell Caribbean Cup was the football championship of the Caribbean.


The following is a Wikipedia report on one game in that competition, the surreal 1994 match between Barbados and Grenada:


Grenada went into the match with a superior goal difference, meaning that Barbados needed to win by two goals to progress to the finals. The trouble was caused by two things. First, unlike most group stages in football competitions, the organizers had deemed that all games must have a winner. All games drawn over 90 minutes would go to sudden death extra time. Secondly and most importantly, there was an unusual rule which stated that in the event of a game going to sudden death extra time the goal would count double, meaning that the winner would be awarded a two goal victory.


Barbados was leading 2-0 until the 83rd minute, when Grenada scored, making it 2-1.


Approaching the dying moments, the Barbadians realized they had little chance of scoring past Grenada's mass defence in the time available, so they deliberately scored an own goal to tie the game at 2-2. This would send the game into extra time and give them another half hour to break down the defence. 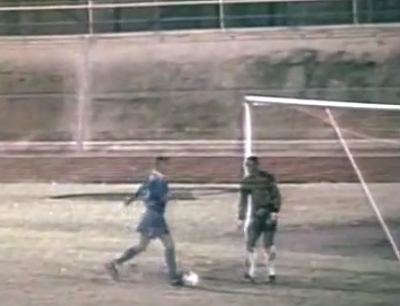 
The Grenadians realised what was happening and attempted to score an own goal as well, which would put Barbados back in front by one goal and would eliminate Barbados from the competition.


However, the Barbados players started defending their opposition's goal to prevent them from doing this, and during the game's last five minutes, the fans were treated to the incredible sight of Grenada trying to score in either goal while Barbados defended both ends of the pitch.


Barbados successfully held off Grenada for the final five minutes, sending the game into extra time. In extra time, Barbados notched the game-winner, and, according to the rules, was awarded a 4-2 victory, which put them through to the next round.


In a press conference after the game, Grenadian manager James Clarkson said:


"I feel cheated. The person who came up with these rules must be a candidate for a madhouse. The game should never be played with so many players running around the field confused. Our players did not even know which direction to attack: our goal or their goal. I have never seen this happen before. In football, you are supposed to score against the opponents to win, not for them"


Ultimately Trinidad /  Tobago defeated Barbados and went on to defeat Martinique in the final.


The scoring rules were not used in the Cup after 1994.