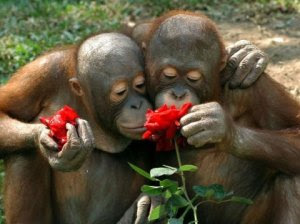 Byter Steve, aka the Squire of Razorback, sent me an email back in July that read in part:

Following on from your 23rd July Persian Proverb Bytes, Otto, do you know where the following phrase comes from and what film it is in? I know the film, but I don’t know the source (unless of course it is the work of the writer of what is a marvellous script). . . “step outside and smell the thorns!”

In a follow up email a day or two ago, Steve queried the lack of response.  He chortled, chuckled and chided that he may have stumped me, predicting “a tirade of unfamiliar smug comments” and “an expression of joy, the likes of which you have never experienced”.

It’s hard to believe, reading the above, that Steve is a mate.  Still, in friendship but with equal relish, I say to Steve: “On your bike, Squire.”  I had in fact looked into it at the time, I just hadn’t gotten around to writing it.  Here it now is.

The phrase comes from the 1998 movie Meet Joe Black:

Drew:
You’ll be farting through silk.
You’ll sell your stock.  You’ll be positively, truly rich.
You can stop kissing ass.
What’ll it feel like to be a man?

Quince:
I’m going to expose you.

Drew:
Okay.  Go right ahead.
You tell William Parrish how you betrayed him in a secret board meeting.
Tell Allison how you helped her father lose his company.
It’s just life, Quincie.
Wake up and smell the thorns.

The phrase is believed to have been written for the movie script and is a play on the words “Wake up and smell the coffee”.  That phrase means to face reality and is often used to point out facts to someone who is unable to see them on their own.  The phrase was popularised by Ann Landers in her advice column in the 1960’s but she may not have originated the phrase.

Some thorny thoughts and comments:
“He got up in the end and looked around the hollow room.  On his knees he went to the pile of rubbish and pulled it apart.  There were squares paper, dozens on which she had been writing in huge unsteady letters about Eeny, Meeny, Miney and Mo, and about the world being a funny place.

He read it through as she had written it.

He remembered writing it for her.  So she could learn it.  He remembered Tasker writing ‘Don’t it get on your tits?’ as a last line.

There's no dearth of kindness in this world of ours; only in our blindness we gather thorns for flowers.

“A thorn defends the rose, harming only those who would steal the blossom.”

“Even a small thorn causes festering.”

“Instead of complaining that the rosebush is full of thorns, be happy that the thorn bush has roses.”
- German proverb

The expression “thorn in {one’s] side”, meaning a person is an irritation (or “pain in the arse”), comes from the Bible where Paul mentions having a “thorn in the flesh” to stop him becoming proud.  The “thorn” is not identified, it could have been illness.

Therefore, in order to keep me from becoming conceited, I was given a thorn in my flesh, a messenger of Satan, to torment me.  Three times I pleaded with the Lord to take it away from me.  But he said to me, “My grace is sufficient for you, for my power is made perfect in weakness.” Therefore I will boast all the more gladly about my weaknesses, so that Christ’s power may rest on me.  That is why, for Christ’s sake, I delight in weaknesses, in insults, in hardships, in persecutions, in difficulties. For when I am weak, then I am strong.

Bertie was reading his latest book in the library.

On the very first page he came across an unfamiliar word. So he called out to Jeeves.  "Jeeves, what is this 'fox pass'?"

"Oh, that would be 'faux pas': a French phrase, sir, pronounced 'foe pa'; which literally means a 'false step' but is equivalent to 'putting your foot in your mouth' in English.

"Well sir, let me explain it this way. Do you remember last weekend when Miss Plushbottom came to stay for the weekend?"

"And do you remember how on Sunday morning you gave her a rose and pricked your finger on a thorn?"

"And do you remember how, later, at breakfast, Miss Plushbottom asked you, 'Is your prick still throbbing, Bertie?', and I dropped a pot of marmalade?" 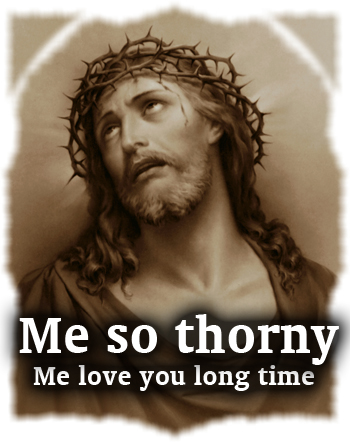