This post marks the beginning of another Readers’ Week, a week when the items posted will consist of contributions from Byters.


Today’s item is the story of a B-17 bomber named “All American” that made it back to base despite having suffered heavy damage. It was sent to me by Byter Nadia. Thanks, Nadia.

(This is not the same story as that of the B-17 bomber “Charlie Brown” that returned to base with the assistance of a German fighter pilot who refused to shoot it down. That story can be read at:
http://bytesdaily.blogspot.com.au/2012/05/tale-of-two-planes.html).


Some comments about the item, together with some additional pics, follows the article. 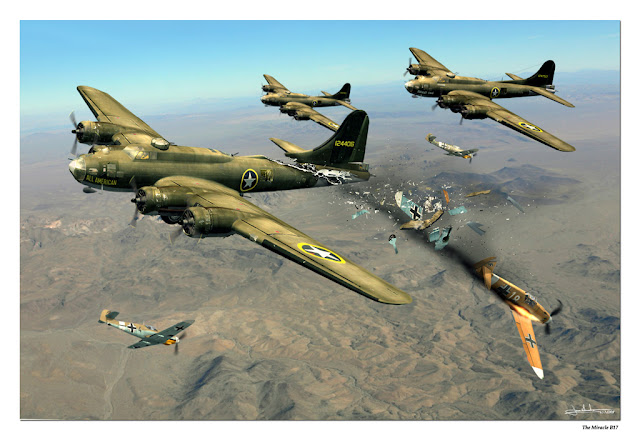 A mid-air collision on February 1, 1943 between a B-17 and a German fighter over the Tunis dock area became the subject of one of the most famous photographs of World War II.

An enemy fighter attacking a 97th Bomb Group formation went out of control, probably with a wounded pilot, then continued its crashing descent into the rear of the fuselage of a Fortress named All American, piloted by Lt. Kendrick R. Bragg, of the 414th Bomb Squadron.

When it struck, the fighter broke apart, but left some pieces in the B-17. The left horizontal stabilizer of the Fortress and left elevator were completely torn away. The two right engines were out and one on the left had a serious oil pump leak. The vertical fin and the rudder had been damaged, the fuselage had been cut almost completely through... connected only at two small parts of the frame and the radios, electrical and oxygen systems were damaged. There was also a hole in the top that was over 16 feet long and 4 feet wide at its widest and the split in the fuselage went all the way to the top gunner’s turret. 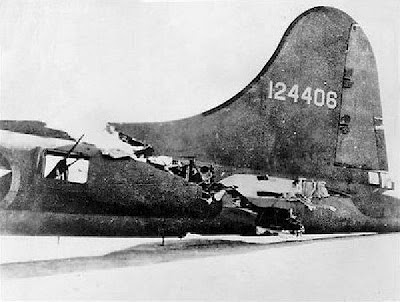 There was also a hole in the top that was over 16 feet [nearly 5 metres]  long and 4 feet [1.2m] wide at its widest and the split in the fuselage went all the way to the top gunner’s turret.

Although the tail actually bounced and swayed in the wind and twisted when the plane turned and all the control cables were severed, except one single elevator cable still worked, and the aircraft still flew... miraculously!

The tail gunner was trapped because there was no floor connecting the tail to the rest of the plane. The waist and tail gunners used parts of the German fighter and their own parachute harnesses in an attempt to keep the tail from ripping off and the two sides of the fuselage from splitting apart. 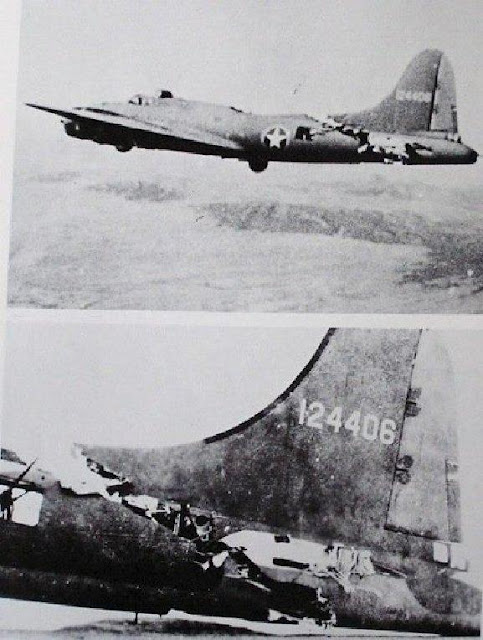 While the crew was trying to keep the bomber from coming apart, the pilot continued on his bomb run and released his bombs over the target.

When the bomb bay doors were opened, the wind turbulence was so great that it blew one of the waist gunners into the broken tail section. It took several minutes and four crew members to pass him ropes from parachutes and haul him back into the forward part of the plane. When they tried to do the same for the tail gunner, the tail began flapping so hard that it began to break off. The weight of the gunner was adding some stability to the tail section, so he went back to his position.

The turn back toward England had to be very slow to keep the tail from twisting off. They actually covered almost 70 miles to make the turn home. The bomber was so badly damaged that it was losing altitude and speed and was soon alone in the sky. For a brief time, two more Me-109 German fighters attacked the All American. Despite the extensive damage, all of the machine gunners were able to respond to these attacks and soon drove off the fighters. The two waist gunners stood up with their heads sticking out through the hole in the top of the fuselage to aim and fire their machine guns. The tail gunner had to shoot in short bursts because the recoil was actually causing the plane to turn.

Allied P-51 fighters intercepted the All American as it crossed over the Channel and took one of the pictures shown. They also radioed to the base describing that the empennage was “waving like a fish tail” and that the plane would not make it and to send out boats to rescue the crew when they bailed out. The fighters stayed with the Fortress taking hand signals from Lt. Bragg and relaying them to the base. Lt. Bragg signalled that 5 parachutes and the spare had been "used" so five of the crew could not bail out. He made the decision that if they could not bail out safely, then he would stay with the plane and land it.

Two and a half hours after being hit, the aircraft made its final turn to line up with the runway while it was still over 40 miles away. It descended into an emergency landing and a normal roll-out on its landing gear.

When the ambulance pulled alongside, it was waved off because not a single member of the crew had been injured. No one could believe that the aircraft could still fly in such a condition. The Fortress sat placidly until the crew all exited through the door in the fuselage and the tail gunner had climbed down a ladder, at which time the entire rear section of the aircraft collapsed onto the ground. The rugged old bird had done its job.

There has been comment on some websites that although the story is basically true, there are also errors and there have been embellishments that make the story more amazing and sentimental. One example is that the whole rear section of the plane did not collapse after the last crew members exited, rather only the rear landing wheel collapsed.

The following is a comment by the nephew of the plane’s bombardier at a forum discussion at:
http://www.democraticunderground.com/10021117454#post1
His comments are dated 2 September 2012.

Hello, joining this forum this evening to set the record straight on a couple of details... this is my uncle's plane, Ralph Burbridge was the bombardier... and he's still alive at the age of 92.

This particular version of the story is found in several places on the internet and has some problems that some of you have already identified. I thank you for setting the record straight.

The 97th BG was based near Tunis. After they dropped their bombs the mid-air collision occurred. The group formed up around the All American and that's how we have this great picture of her after the pilot Ken Bragg got her under control after the collision. After it was determined that Ken could control the plane with just engine speed and wing surface controls the formation returned to base in North Africa... not England. The All American came home much later to a grateful ground crew.

Several official pictures of her are available at the Fold3 website and you can see that the tail section never did 'fall off' or crumple after the crew got off.

I'm attempting to contact relatives of the crew to gather their versions of this great story and will do what I can to correct the errors where I find them. I currently have the pilot, navigator and bombardier's stories and I'm working on getting the radio operator, tail gunner and ball turret gunner's stories now.

My uncle was the past president of the 97th BG reunion association many years ago and I'm trying to find out where those records went to. If anyone has any ideas on this please let me know.

As a side bar to this story... the 414th flies today! The 414th was reactivated November 2011 and they contacted me earlier this year. Recently Ralph was presented a US flag flown in his honor in Turkey along with a citation thanking him for his service by the 414th. They still use the same insignia (bearcat on the damaged tail section praying) inspired by the All American almost 60 years ago. Made the old man's day!

An interview with Ralph Burbridge can be read at:
http://www.waterlandblog.com/2012/09/21/local-b-17-bombardier-recalls-wing-and-a-prayer-mission-on-the-all-american/
That interview includes a detailed account of the amazing flight of the "All American" B-17. 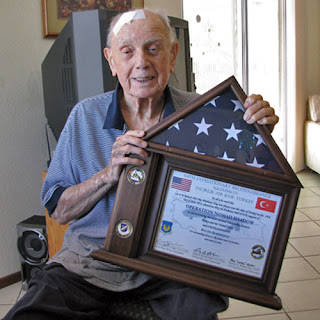 Ralph Burbridge of Des Moines, a B-17 bombardier in World War II, holds the encased flag that the 414th Squadron, which he flew with, raised in his honor earlier this year (2012) above their base in Turkey. He is also holding a note of appreciation from the squadron for his wartime service. 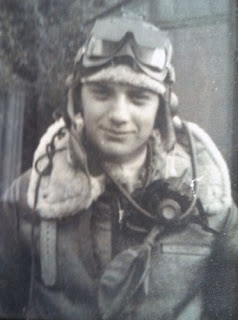 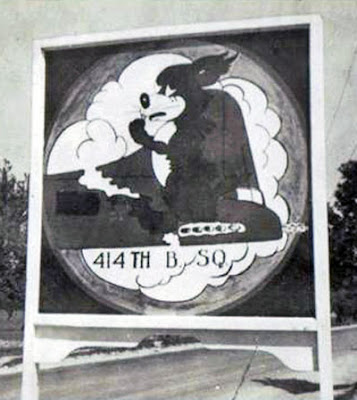 
Lt. Kendrick "Sonny" Bragg, the pilot of the damaged bomber “All American”, survived the war and subsequently graduated from Princeton University with a degree in architecture. He worked in New Jersey, Puerto Rico and then moved to St. Thomas, Virgin Islands, where he practiced architecture for 30 years. Lt Bragg died in 1999 aged 81. 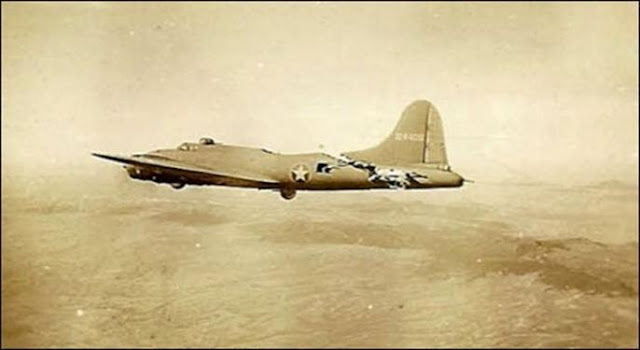 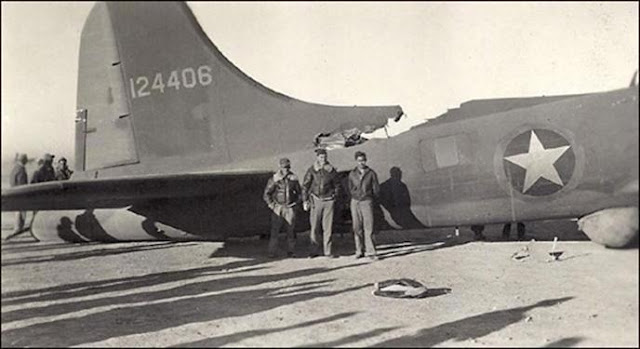 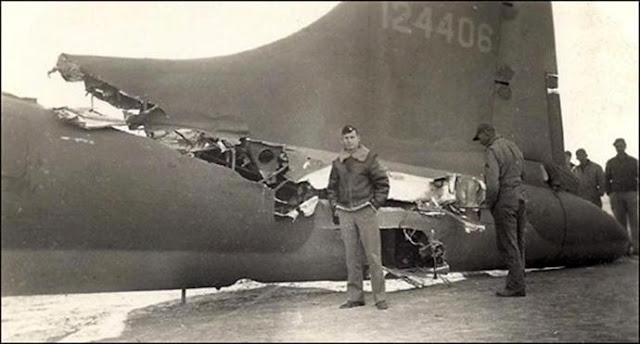