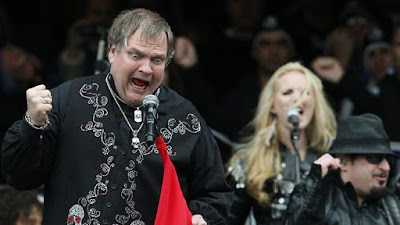 Back in 2011 Meat Loaf was the half time act during the Rugby League Grand Final. He was terrible and sang painfully off key. Mr Loaf responded badly and angrily to resulting criticism:

"They're all like a herd of sheep. They all fall behind each other and smell each others' butts. That's what they do. And that's how I consider them, butt smellers. They also can go hang themselves because they can line up out here on the street, right now, all 20, 000 of them or whoever wrote whatever they wrote, line up, say it to my face and take me on one at a time. And I guarantee you they wouldn't do it because I'd take take all of them 20,000 out in an afternoon. And I'll tell you what, anybody that I hear announces that they're going to play for them I'm going to write to that particular artist a letter and tell them not to...And I hope the AFL hears this and I want this everywhere. Because I will go out of my way to tell any artist do not play for them."

"I think that we were incredibly generous in respect to him. When you look at the money he [Meatloaf] got paid for what he produced I think we're the most generous group in the world. He probably got, I don't know, half a million bucks or something, and it was probably about $499,000 too much.”

Yesterday, Mr Loaf issued an apology, possibly connected with the fact that he has a new album coming out and Oz was always previously a great market for his album sales:

"For the countless Fans that have bought records ,tickets to my shows and have always been there for me . I want to now make an apology for any angry or harsh words , I have made towards the Australian football league , their fans and the people of Australia. I am truly sorry . I can't take it back. It happened and I am truly sorry . I have learned one lesson from now on no matter what happens or when it happens . there is only one person to blame and that is myself . Stand like a man and say I am sorry. I may never see you again and I can never repay what the people of Australia have given too me. I betrayed your trust , I Apologize for any feelings that I have hurt, My behavior was extremely inappropriate, immature, and lacked the respect for the people of Australia and the Australian football league. Again, I am sorry for my actions and I hope that we can put this matter behind us.
With much Respect ,
Meat Loaf"

He also took the opportunity to clarify his name, his grammar and his spelling:

Now it seems I must apologize for the terrible spelling and grammar, In the Message . grammar ok , spelling no ! My mother was an English teacher.
There is saying that goes with the above.. " The shoe makers kids have no shoes. " so for the grammar , I apologize. M One more thing for all of you have committed on my spelling , I will now correct you. Meat Loaf is 2 words not one. Thanks Meat .. One more little thing this is not a PR stunt , it is from my heart . It is who I am . I am a real person , I am not a star , and I don't Like being called one. 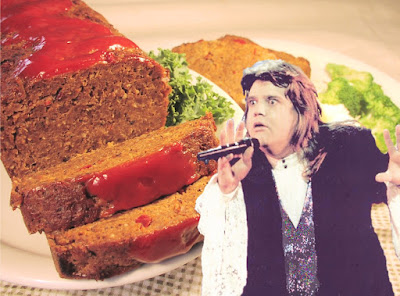 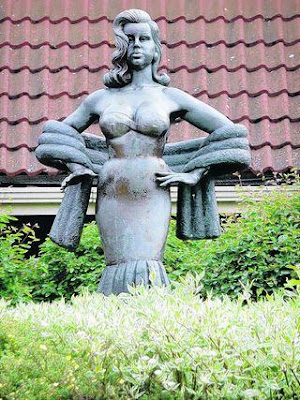 . . . the actress Diana Dors, who was brought up in Swindon, where she is commemorated today in a saucy bronze sculpture (see above), which was created in 1991 by John Clinch. It stands outside the cinema at Shaw Ridge Leisure Park.

Diana was Britain’s answer in her 1950s heyday to Marilyn Monroe and Jayne Mansfield. And like the former Norma Jean Baker and Vera Jayne Palmer, she had changed her name before making her bid for stardom. It is easy to see why she decided to do this, because she was born and brought up as Diana Fluck.

The vicar at the church fete was reminded of this before he mounted the podium to welcome the celebrity.

Thus it was that he was able to tell his audience: “Ladies and gentlemen, it is with great pleasure that I introduce to you our star guest. We all love her, especially as she is our local girl. I therefore feel it right to introduce her by her real name.

Posted by BytesMaster at 3:34 AM