A contribution from Graham E, some interesting items from the past.

A few objects that are `Curiouser and curiouser!' as Alice cried in Alice’s Adventures in Wonderland, chapter II, The Pool of Tears. 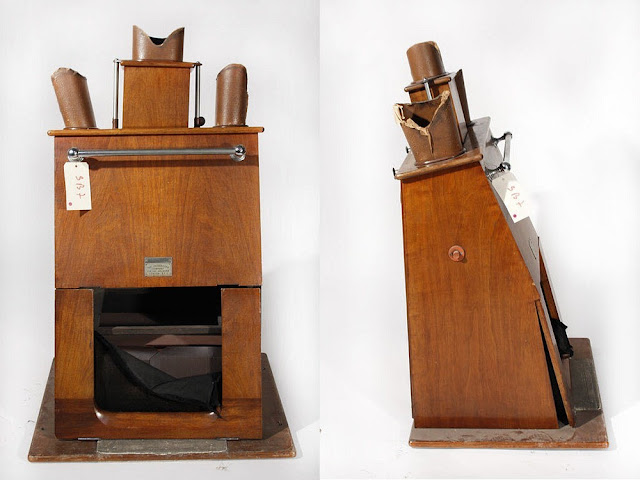 The shoe-fitting fluoroscope was an upward-facing x-ray tube mounted inside a metal box allowed a customer to place their foot between the tube and the fluoroscopic screen. The x-rays penetrated the shoe and foot and then struck the fluorescent screen, lighting it up with the image of the customer’s foot. A substantial amount of radiation was thus scattered in all directions bathing the entire bodies of the customer as well as the salesman in radiation.

Shoe-fitting fluoroscopes, also sold under the names X-ray Shoe Fitter, Pedoscope and Foot-o-scope, were X-ray fluoroscope machines installed in shoe stores from the 1920s until about the 1970s in the United States, Canada, United Kingdom, South Africa, Germany and Switzerland.

In the UK, they were known as Pedoscopes, after the company based in St. Albans that manufactured them.

In the second half of the 20th century, growing awareness of radiation hazards and increasingly stringent regulations forced their gradual phasing out.

The child (or the adult customer) would place his or her feet in the opening provided and while remaining in a standing position, look through a viewing porthole at the top of the fluoroscope down at the x-ray view of the feet and shoes. Two other viewing portholes on either side enabled the parent and a sales assistant to observe the child's toes being wiggled to show how much room for the toes there was inside the shoe. The bones of the feet were clearly visible, as was the outline of the shoe, including the stitching around the edges.

Large variations in dose were possible depending on the machine design, displacement of the shielding materials, and the time and frequency of use. Radiation surveys showed that American machines were ten times more powerful than the British Pedoscopes.

Exposure was not limited to the feet and damaging effects were cumulative.

Those most at risk were children, who are about twice as radiosensitive as adults, and salespersons who were exposed on a continual basis. 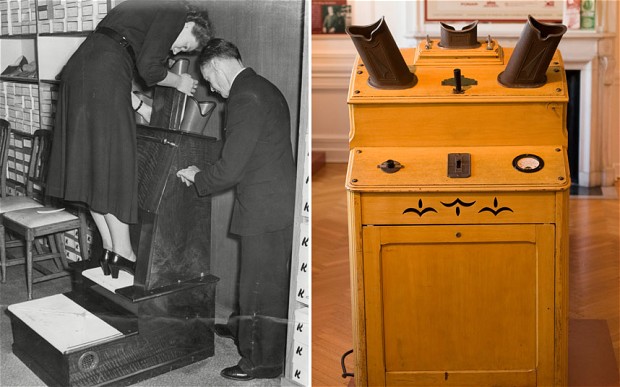 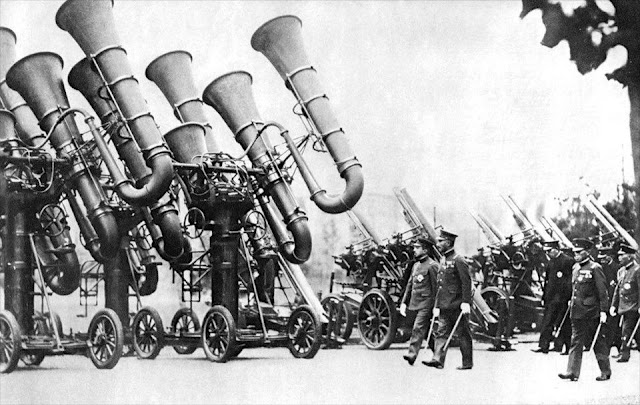 Before the advent of radar, a lot of countries had developed these types of essentially sonar systems to serve as early warning for air raids. The acoustic locators are used to listen the plane before they attack. The picture shows three Japanese acoustic locators, colloquially known as "war tubas," mounted on four-wheel carriages, being inspected by Japanese Emperor Shōwa.

Also known as “sound trumpets”, they were first used during World War I by France and Britain to spot German Zeppelin airships.

The devices were essentially large horns connected to a stethoscope.

A common configuration of the device had three horns arranged vertically plus an extra one to the side. The central one in the set of three and the lateral one were used to get the aircraft's bearing, while the remaining two were used to estimate its height. The operators would listen in through the stethoscope and tilt the horns until they got the loudest sound. 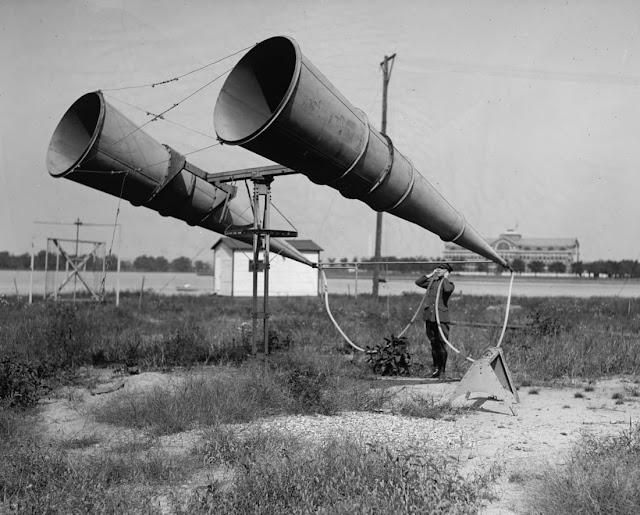 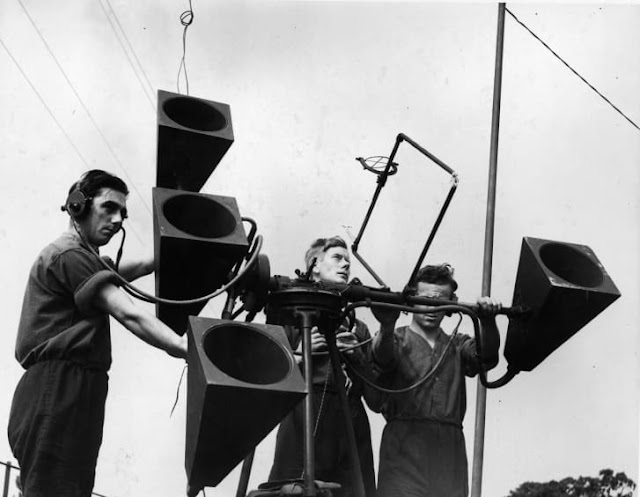 Sound locators were used near the frontline in conjunction with anti-aircraft guns, but their range was limited to just a few miles.

To get better range, the British also experimented with a static type of sound locator, made of concrete and shaped like a dish or a curved wall, known as an "acoustic mirror." These were first trialled in the southern and eastern coast of England during World War I and then built in about a dozen locations throughout the 1920s and 1930s. They were up to 30 feet (9 meters) in diameter, but a wall-shaped one in Kent, 60 miles south-east of London, spanned 200 feet (61 meters) in length. Many other countries including Germany, Japan and the United States were also developing sound locators at this time. 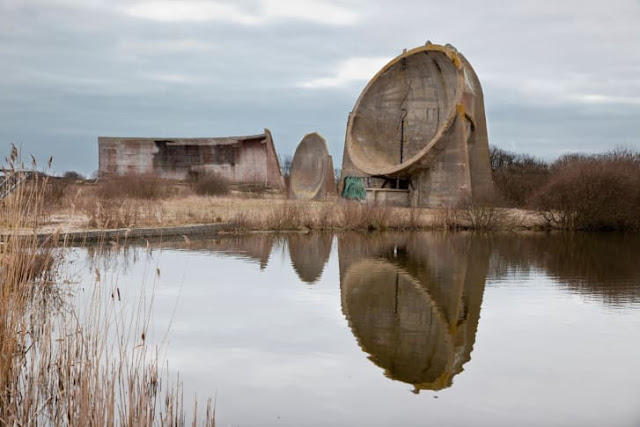 The large concrete sound locators were immovable but had better range, about 10 to 15 miles (16-25 kilometres), which would give one in Yorkshire listening to a Zeppelin approaching at a speed of 60 miles an hour (96 km per hour) a 15-minute warning of its arrival.

After 1930, microphones were used to pick up and amplify the noise, and later still, in 1939, the most advanced systems did away with sound completely and transformed the noise into a visual symbol on a cathode ray tube screen -- an innovation that came from the inventor of stereophonic sound, Alan Blumlein.

They eventually achieved ranges of up to about 20 miles (32km) in good conditions. What overtook them was the increasing speed of aircraft, which in the late 1930s were traveling at between 190 to 240 miles an hour (300-385km per hour).

Planes were becoming too fast for sound locators, but in any event by the outbreak of World War II, in 1939, the introduction of radar started making them obsolete, although some sound locators were occasionally used until the end of the war. Radar had a range of 80 miles (130km) and played a crucial role in the Allied victory.

Several of the sound mirrors built in England (and one built overseas in Malta) survive to this day, and some have received restoration work. 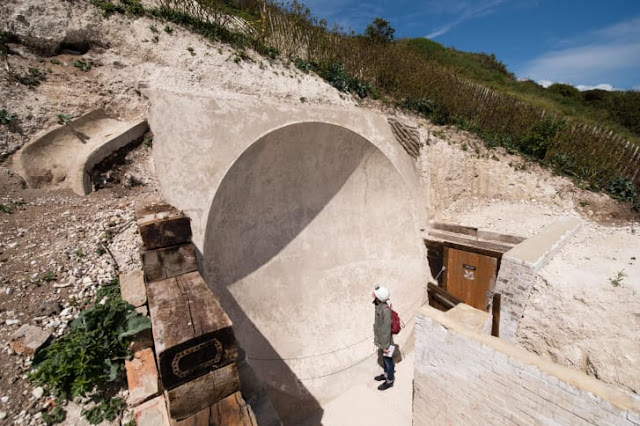 A woman stands by one of the First World War "Sound Mirror" listening devices at the Fan Bay Deep Shelter within the cliffs overlooking Dover, England. 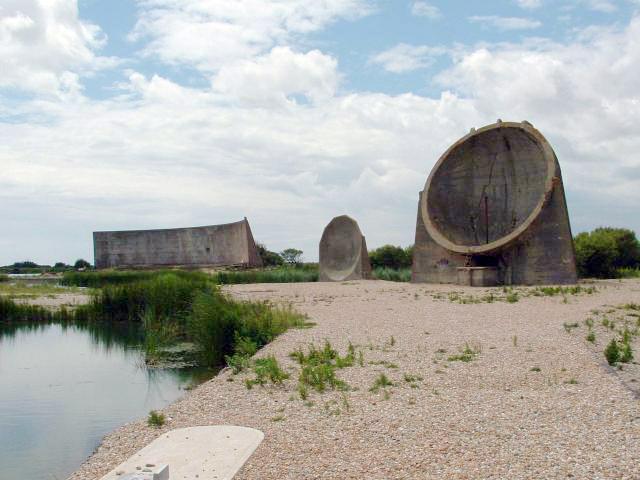 Another view of the sound mirrors in Dungeness, Kent. The British experimented with different shaped acoustic mirrors. 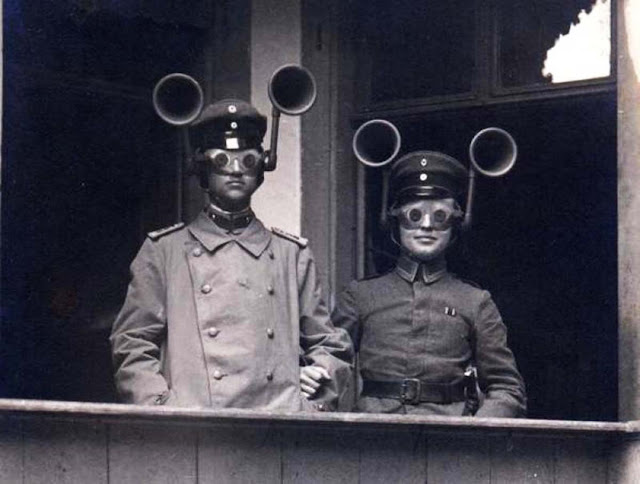 German sound location, 1917. The photograph shows a junior officer and a soldier from an unidentified Feldartillerie regiment wearing combined acoustic/optical locating apparatus. The small-aperture goggles were apparently set so that when the sound was located by turning the head, the aircraft would be visible. 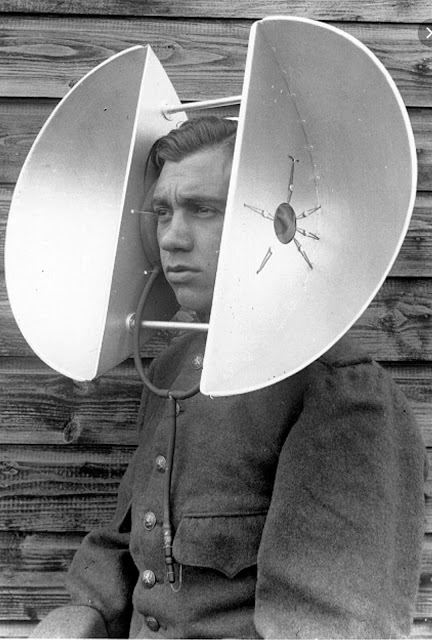 The Dutch personal parabola, 1930s. This personal sound locator consists of two parabolic sections, presumably made from aluminium for lightness. They are mounted a fixed distance apart, but the size of the human head varies somewhat. To accommodate this, it appears that the instrument is fitted with inflatable ear-pads. According to a report dated 1935, this device was put into at least limited production. 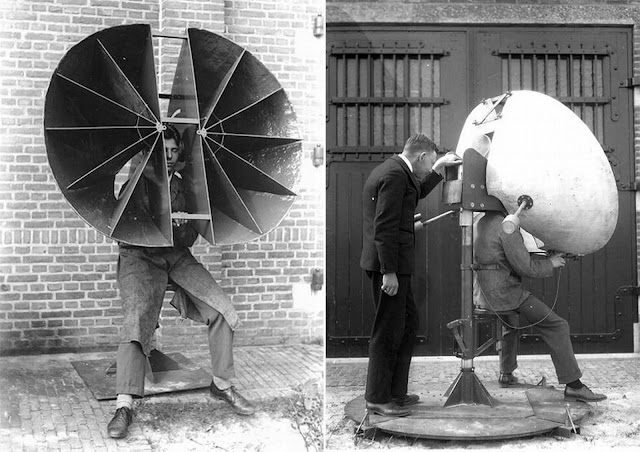 Dutch personal horns: 1930s. This design no doubt had more gain, thanks to its greater area. It swivelled on the post behind the operator. On the right, a later version of the design on the left. Note the extra cross-bracing added at the top of the horns. There are two counter-weights sticking out towards the rear. Rubber rings cushioned the operator’s ears. 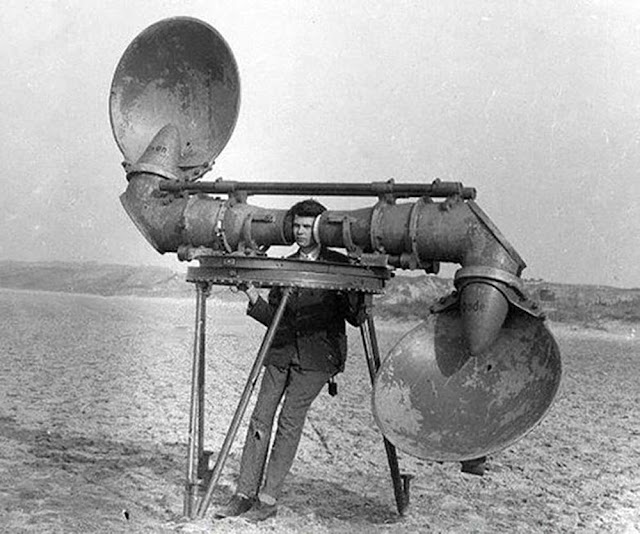 A Czech locator, 1920s. Scoop-shaped reflectors direct the sound into large-diameter tubes. Manufactured by Goerz. When tested at the Dutch military research station at Waalsdorp it was found it “contained fundamental deficiencies”.

Perrin acoustic locator on trial in France. 1930s. This machine was designed by French Nobel prizewinner Jean-Baptiste Perrin. Each of the four assemblies carries 36 small hexagonal horns, arranged in six groups of six. Presumably this arrangement was intended to increase the gain or directionality of the instrument.9 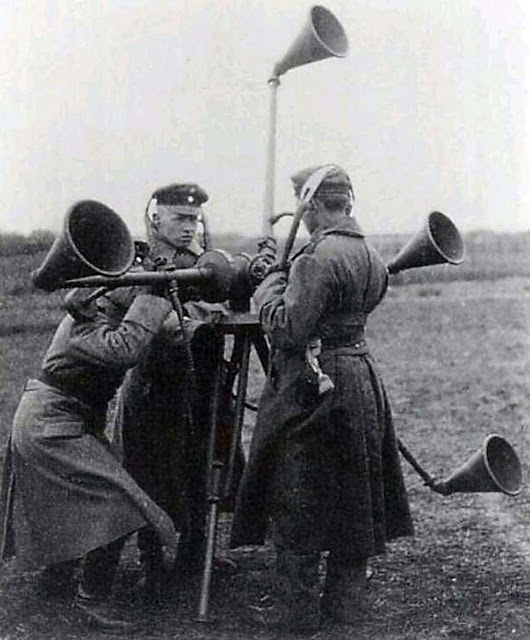 German acoustic locator in use. This device was based on the researches of Erich von Hornbostel. With Max Wertheimer, he developed in 1915 a directional listening device that they referred to as the Wertbostel. This device seems to have had some success as they were still discussing licence fees with manufacturers as late as 1934. 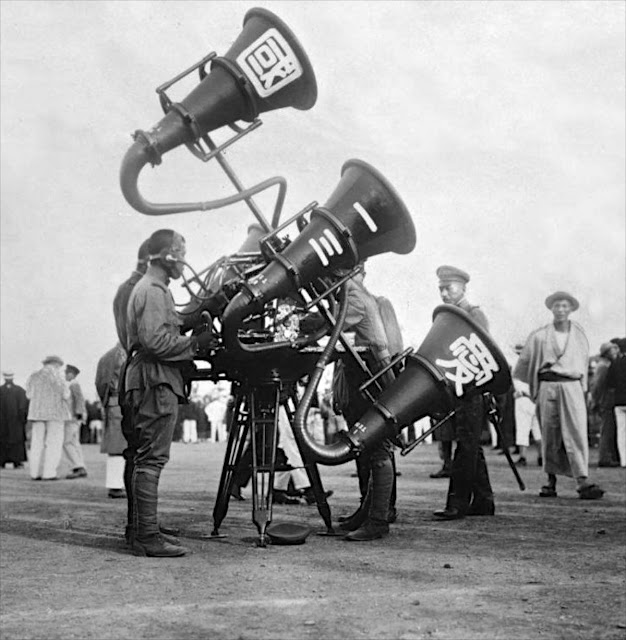 Japanese soldiers demonstrate the use of a “war tuba”. 1932. 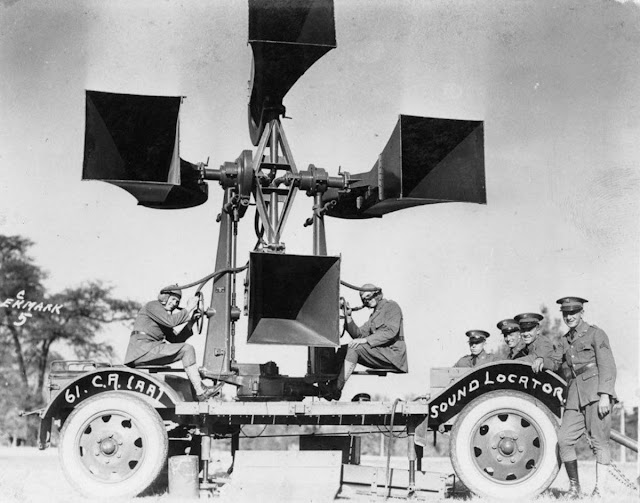 An early radar system in operation at an aerodrome in the south of England. 1930s. 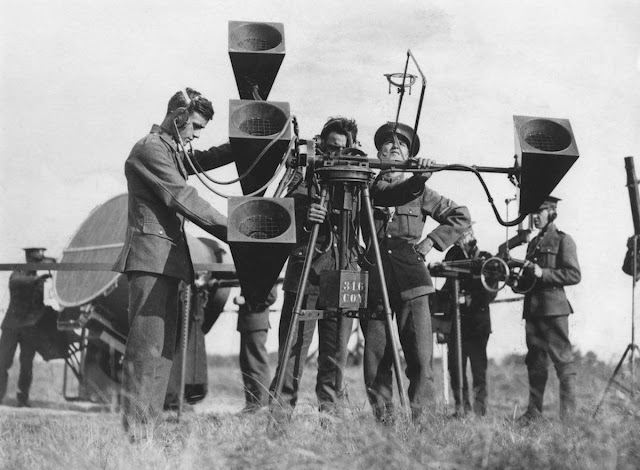 A four-horn acoustic locator again, in England, 1930s. There are three operators, two with stethoscopes linked to pairs of horns for stereo listening. 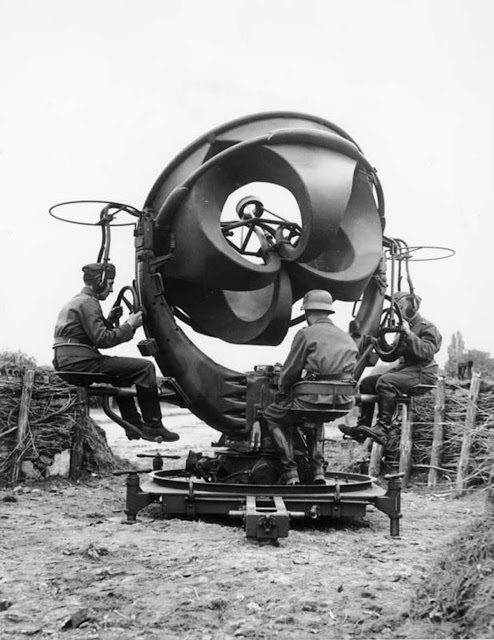 Sound location equipment in Germany, 1939. It consists of four acoustic horns, a horizontal pair and a vertical pair, connected by rubber tubes to stethoscope type earphones worn by the two technicians left and right. The stereo earphones enabled one technician to determine the direction and the other the elevation of the aircraft. 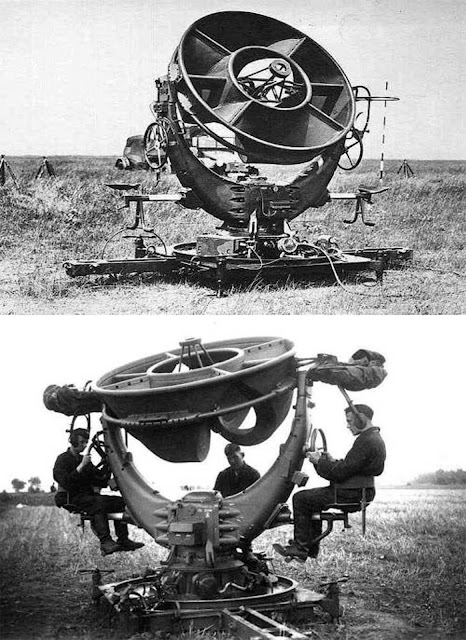 The acoustic locator could detect targets at distances from 5 to 12 km, depending on weather conditions, operator skill, and the size of the target formation. It gave a directional accuracy of about 2 degrees. 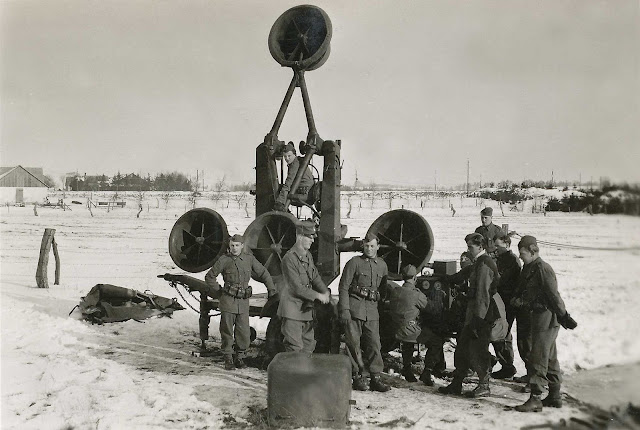