I was in two minds about posting a Funny Friday, given that the east coast of Australia is experiencing unprecedented fires that have so far taken 17 lives and thousands of homes.  Entire towns have been waiting on beaches for evacuation, reminiscent of Dunkirk; communities are trapped; businesses have been destroyed at a time when they would usually have their greatest trade; half a billion wildlife animals have been killed, as has farm livestock, farmers having to shoot remaining livestock in many cases.

In such circumstances, telling jokes feels a bit like dancing on someone’s grave, especially in that my locality is removed from the fires and the drought which is also devastating the country.

Ultimately I made the decision that in times of crisis, people should persevere and carry on, even with daily routines and activities. I am therefore still posting a Funny Friday whilst respecting and thinking of those less fortunate.

If anyone wishes to make a donation or otherwise to assist, here are some links for support:


NSW Rural Fire Service
The NSW RFS is composed of volunteers and is the largest volunteer fire service in the world. Rural Fire Brigades are more than just an emergency service, they are also a vital community service, providing a community meeting point and offering assistance with non-emergency roles.
https://www.rfs.nsw.gov.au/volunteer/support-your-local-brigade

NSW Rural Fire Service
Donations to the families of the two volunteer firefighters who were killed during the Green Wattle Creek fire. Geoffrey Keaton (32 years old) and Andrew O'Dwyer (36) who both leave behind young children.
hhttp://www.rfs.nsw.gov.au/news-and-media/general-news/featured/support-for-firefighter-families

Salvation Army
The Salvos have launched a Disaster Appeal to support communities affected by the bushfires.
https://www.salvationarmy.org.au/donate/make-a-donation/donate-online/?appeal=disasterappeal

GIVIT
If you don't have much spare cash but do have useful household items to donate to those affected by the fires, GIVIT might be the place to go. Money can also be donated.
Re NSW:
https://givit.worldsecuresystems.com/items-needed?campaign=50
Re Qld:
https://givit.worldsecuresystems.com/items-needed?campaign=49

Husband: My wife is missing. She went shopping yesterday and has not come home.

Sheriff: What is her height?

Husband: Gee, I'm not sure. A little over five-feet tall.

Sheriff: What was she wearing?

Husband: Could have been pants, or maybe a skirt or shorts. I don't know exactly.

Sheriff: What kind of car did she go in?

Husband: She went in my truck.

Sheriff: What kind of truck was it?

Last September I posted a lengthy item as follows:

A man is at the funeral of an old friend.

He tentatively approaches the deceased's wife and asks whether he can say a word. The widow nods. The man clears his throat and says, "Plethora."

The widow smiles appreciatively. "Thank you," she says. "That means a lot."

Another man comes up and says: "Mind if I say a word too?" She says: "Please do." The man clears his throat and says: "Bargain." The widow replies: "Thanks, that means a great deal."

Another man comes up and asks for the same privilege. The widow thanks him, saying that would be very nice. The man clears his throat and says: "Earth." The widow replies, "Thank you, that means the world."

Another man comes up and asks if he could say a couple words. The widow thanks him, saying that would be very nice. The man clears his throat and says: "Being alive." The widow replies, "Thank you, he would have liked that."

Another man comes up and asks if he could say a word. The widow thanks him, saying that would be very nice. The man clears his throat and says: "Infinity" . The widow replies, "Thank you, that means more than you could possibly imagine."

Another man comes up and asks if he could say a word. The widow thanks him, saying that would be very nice. The man clears his throat and says: "Fhqwhgads". The widow replies: "Thanks, you don't know what that means."

Another man comes up and says: “Mind if I say a few words too?” She says: “Please do.” The man clears his throat and says: “The Mariana Trench.” The widow replies: “Thanks, that’s really deep.”

Another man comes up and says: "Mind if I say a few words too?" She says: "Please do." The man clears his throat and says: "water pit". The widow replies: "Thanks, I know you mean well."

Another man approaches the widow and says: “I’m truly sorry for your loss, he was a great man.” The widow replies: “I’m not sure you understand what’s happening here.”

Since then I have had occasions when I have used one of the above responses in various situations.  Example:

This came to mind because I came across a slightly different version of the above item which is also worth posting.  I find it humongously amusing, and that means a lot . . .

A guy walks up to the widow at her husband’s funeral and says " May I just say one word?" “Yes,”  she replies. “Plethora." The widow says “Thanks. That means a lot".

A man approaches the widow and says " May I just say a few words?"  “Yes,” she replies. "El mundo." The widow says "Thanks. That would have meant the world to him.

A man approaches the widow and says, "May I just say one word?"  “Yes,” she replies. "Infinity." The widow says, "Thank you. That means more than you know."

A man approaches the widow and says "May I just say one word?" "Yes,” she replies. "Discount." The widow says, "Thank you. That means a great deal."

Another asks to say a couple words, and the widow agrees. "Not dying." The widow tells him "Thank you, he would have liked that."

Another asks to say a word, and the widow agrees. "Glortnushpre." The widow tells him "Thank you, you have no idea what that means."

A man approaches the widow and says "May I just say a few words?" "Yes,” she replies. "Ghost elevator." The widow says, "Thank you. That really lifts my spirits"

A man approaches the widow and says "May I just say one word?  But you'd probably think I'm condescending."  "And what's that?"  "It's when you talk down to someone.”

Call me a racist if you want, but south of the border is a sea of violence, corruption and stupidity I wouldn't touch with a ten foot pole.

I am thankful every day that I live in Canada.

The first woman teed off and watched in horror as her ball headed directly toward a foursome of men playing the next hole.

The ball hit one of the men. He immediately clasped his hands together at his groin, fell to the ground and proceeded to roll around in agony.

The woman rushed down to the man, and immediately began to apologize. 'Please allow me to help. I'm a Physical Therapist and I know I could relieve your pain if you'd allow me,' she told him.

'Oh, no, I'll be all right. I'll be fine in a few minutes,' the man replied. He was in obvious agony, lying in the foetal position, still clasping his hands at his groin.

At her persistence, however, he finally allowed her to help. She gently took his hands away and laid them to the side, loosened his pants and put her hands slowly and carefully inside. She then administered a tender and skilful massage for several long moments and softly asked 'How does that feel'?

“Feels wonderful,” he replied, “but I still think my thumb's broken!”

The bustard's an exquisite fowl
With plenty of reason to howl.
He escapes what would be
Illegitimacy
By grace of a fortunate vowel.

A limerick with a difference in that instead of an AABBA rhyming pattern it uses AAAAB, without a rhyme at the end and by repeating the words that do rhyme:

There was a young fellow named Perkin
Who was always jerkin' his gherkin.
His wife said, "Now, Perkin,
Stop jerkin' your gherkin:
You're shirkin' your ferkin'---you bastard!" 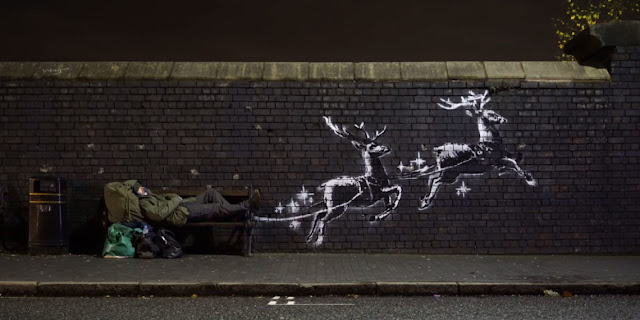 The two reindeer gained red noses in the hours after the mural was unveiled. Authorities placed a sheet of perspex over it and added a protective fence to prevent any further damage. 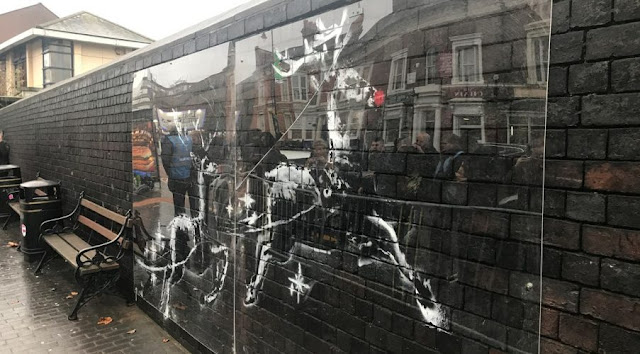 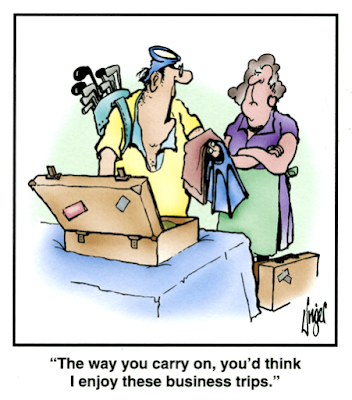 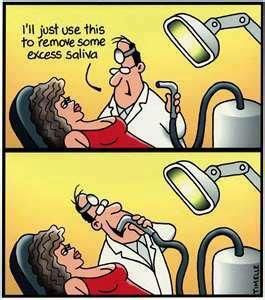 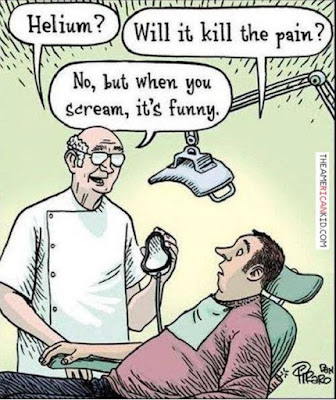 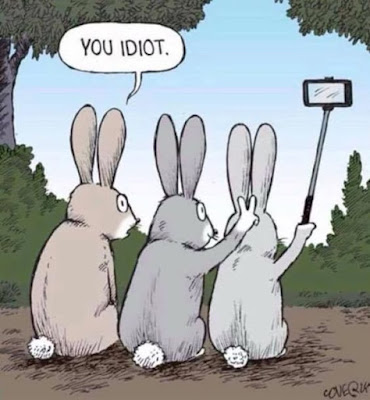 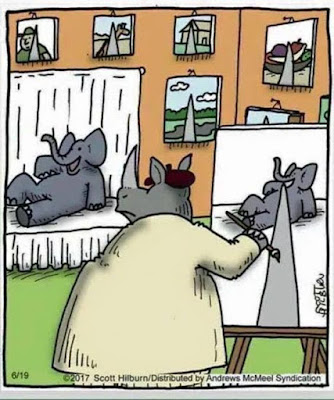 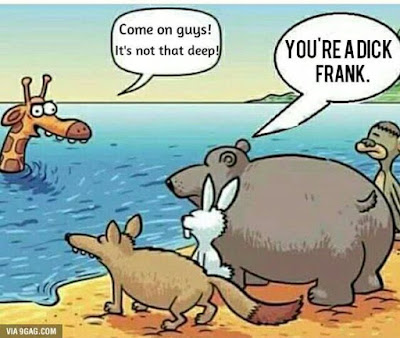 I rear-ended a car this morning...the start of a REALLY bad day!

The driver got out of the other car, and he was a DWARF!!

He looked up at me and said 'I am NOT Happy!'

That's how the fight started.

Why do seagulls fly over the sea?

Because if they flew over the bay they'd be Bagels.

A woman locked her car key in her car, so she asked a passerby for help. The passerby took off his pants, rolled it into a ball and rubbed it on the car door. The car door springs open. Amazed, the woman asked the passerby how did he do it, to which he replied: . . .
"It's simple, these are khaki pants"

Posted by BytesMaster at 1:57 AM