An Antiques Roadshow expert was left red-faced after he drank a 150-year-old bottle of port – only to discover it was filled with urine and rusty nails. Glass specialist Andy McConnell drew gasps from the show’s audience when he plunged a syringe in the bottle’s cork, which dated back to the 1840s.

Owner John brought the mystery tipple with him to the roadshow in Trelissick, Cornwall, in 2016 after finding it buried in the threshold of his house. But even he was taken aback when expert Andy tasted some of the dirty liquid despite remarking beforehand: “It’s very brown.  I think it’s port – port or red wine … or it’s full of rusty old nails and that’s rust,” he said, clearly repulsed by the taste. 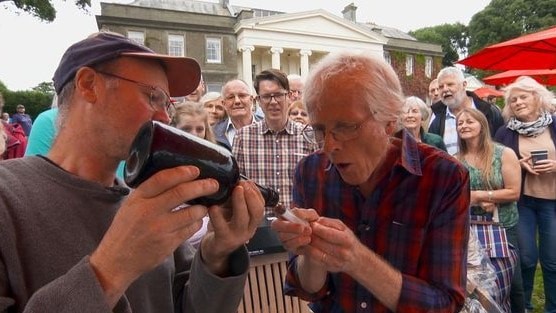 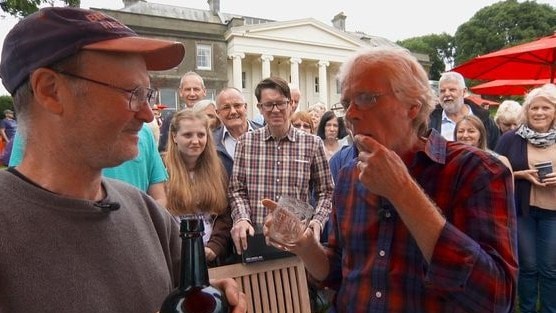 And it has since emerged that Andy was right – about the rust that is.

Speaking to host Fiona Bruce in a recent episode of the long-running BBC show, Andy and John found out that the bottle was filled with human urine along with other unsavoury items such as a human hair. It transpired, much to the expert’s embarrassment, that the disgusting concoction was put into the house’s threshold as a way of warding off witches. “Inside were these brass pins, all of these dating from the late 1840s and the liquid — urine, a tiny pit of alcohol and one human hair,” Fiona explained.

“And a mysterious little creature called an ostracod, which is like a little cockle. So this was not a bottle of port or wine but a witch’s bottle buried in the threshold of the house as a talisman against witchcraft, against curses, against misfortune coming into the home. So you glad you tried it?”

Taking the news in good spirits, Andy replied: “It was too much of a good opportunity to miss.”

McDonalds to the rescue:

A woman being held by her partner who was threatening to kill her, was with the man when they drove through the McDonalds drive-thru in Lodi, California.  After mouthing “Help me” to the McDonalds attendant, staff caused the drive thru traffic to be held up, allowing police to arrive and arrest the captor.

The restaurant is a participant in the “Safe Place” initiative, which provides training to employees in designated locations to assist vulnerable people in need of immediate help and safety. 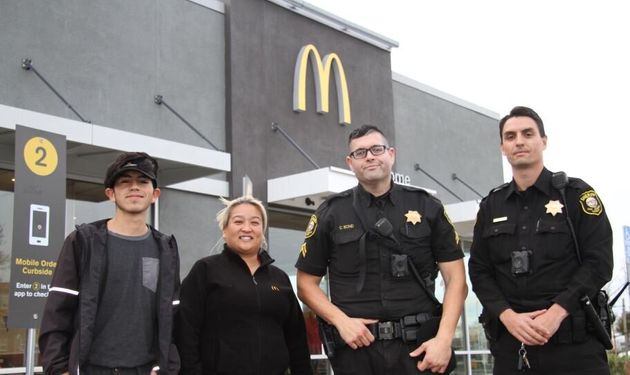 Australia’s on fire.  Our glorious leader Scott Morrison has been conspicuous by doing other than leading, notably holidaying for Christmas in Hawaii until public criticism forced him home, bathing on Bondi Beach and hosting a social function at Kirribilli House (the PM’s Sydney residence) to watch the fireworks over Sydney Harbour, all the while saying that discussion about emissions and climate change will happen later.

Scomo’s Hawaiian sojourn inspired Oz artist Scott Marsh to paint a Christmas Eve mural on a wall in Chippendale, an inner city suburb of Sydney, showing The Scomo wearing a Hawaiian shirt, lei and a Santa hat while holding a fancy cocktail.  Behind the Prime Minister large flames burn, and a speech bubble depicts the words “Merry crisis”. 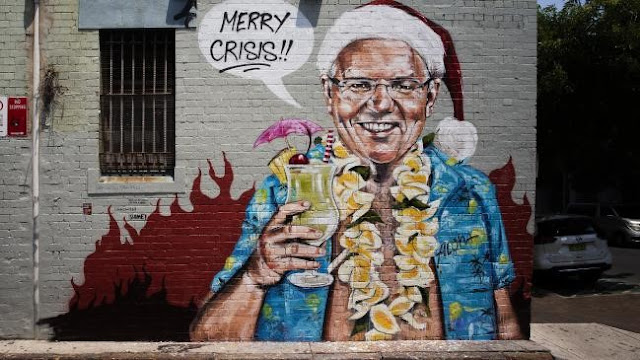 The mural was painted over four days later.  Marsh said he wasn’t sure if the man seen painting over the mural with a roller was a local resident, a concerned citizen or a council worker. 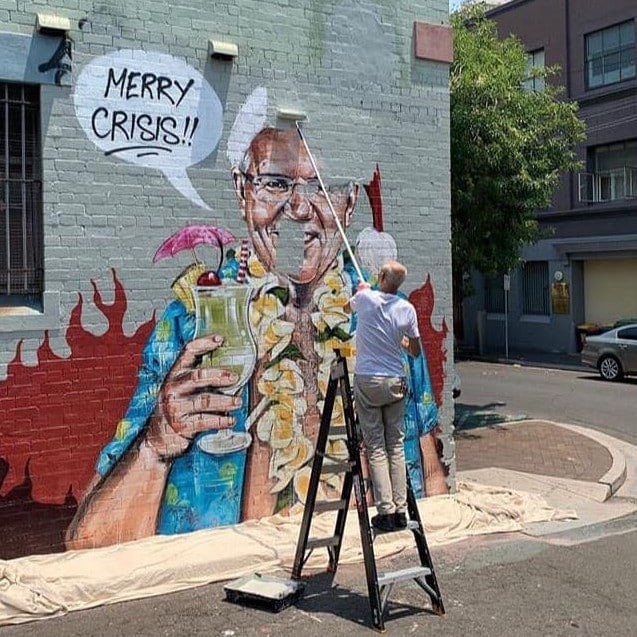 Funds raised from sales of merchandise associated with the mural, including T shirts that were printed for free, had exceeded $60,000, all of which he is donating to the NSW Rural Fire Service (who are all volunteers and which is the largest volunteer fire service in the world).

Hi-tech digital mirrors will reach Australian roads in 2020, replacing conventional glass with sophisticated camera displays.  Audi’s e-tron electric SUV will replace side mirrors with cameras when it arrives locally next year, joined by the likes of McLaren’s Speedtail supercar and even Mercedes-Benz Actros trucks. 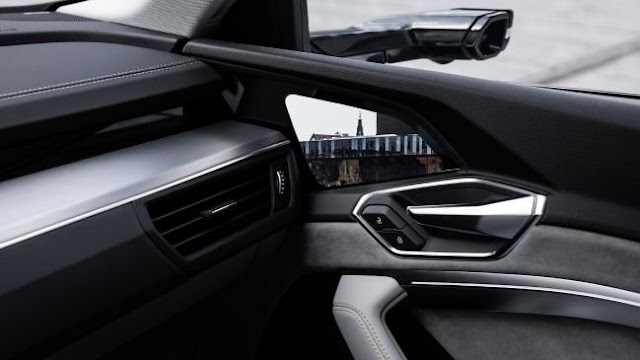 Roof-mounted cameras linked to digital displays on the windscreen frame of trucks free up the driver’s forward and directional vision, while being less susceptible to dirt and grime.  The system has a special mode for reversing and uses AI to detect whether there may be a problem with the trailers — it will alert the driver if the length of a vehicle changes. Drivers sleeping in the cab overnight can access camera feeds remotely to check whether potential thieves are interfering with its cargo. Testers say the technology contributes to a noticeable reduction in fuel consumption.

Mirrorless tech is expected to change the way we drive, that what has been a feature on cars for more than a hundred years could be made obsolete by the new technology as makers chase improved efficiency and safety.

Boris Johnson is being urged to overhaul Britain's foreign aid system after it emerged £151million was sent to China and India last year, even though they are both rich enough to fund their own space programmes.

Figures show foreign aid spending on China and India rose 12 per cent in a year and that more than a fifth of the foreign aid budget is now spent by Whitehall ministries.  Taxpayer money has even gone on one scheme to find if yoga can halt diabetes.

The figures show that the top recipients of UK aid in 2018 were Pakistan, which received £331million, Ethiopia, which took £301million and Nigeria, which got £297million.

Spending in China rose by £11.7million to reach £55.6million in 2018 and in India it went up by £4.9million to £95million. This is despite both countries embarking on active space programmes.  In January, China became the first country to land a robotic spacecraft on the far side of the Moon as part of its drive to become a leading power in space exploration. It also wants to send astronauts to the Moon and is planning to launch a space station.

India spent £107.8million this summer on launching its lunar probe, Chandrayaan-2. It even has its own foreign aid programme, which gave away £620million last year.

Canberra No 1 in the world, but not a good thing:

By midday on January 1, the air quality in Canberra reached a level more than 20 times above hazardous and the recorded index rating was higher than the world's most polluted cities.

Acting chief health officer Dr Paul Dugdale said on New Year's Day the capital experienced the worst air quality conditions since ratings began to be measured 15 years ago.  Dr Dugdale said there were a dozen presentations to Canberra Hospital in the 24 hours to noon on Wednesday for smoke-related conditions.

Winds have been forecast to push more smoke into Canberra.

Message to my father in law, Noel:

Stay inside, Noel, don’t go to the plaza and don’t do anything strenuous. 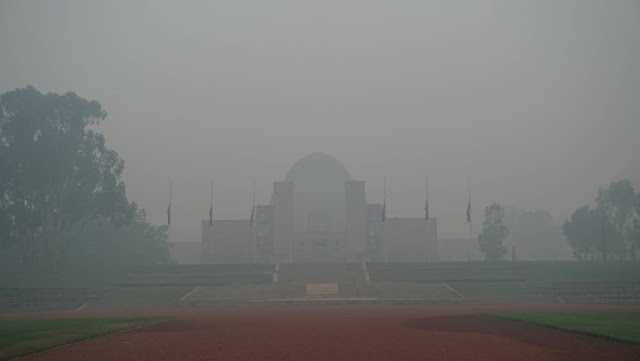 The War Memorial barely visible from a thick smoke haze that has impacted Canberra. 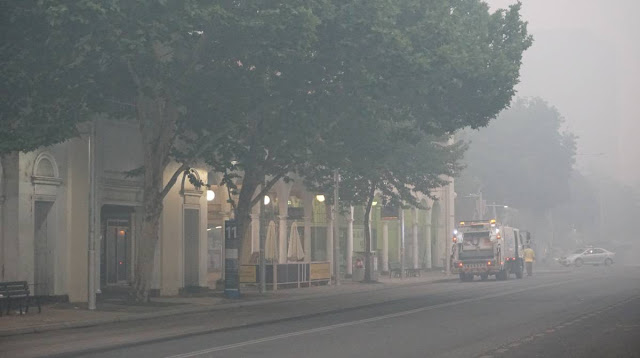 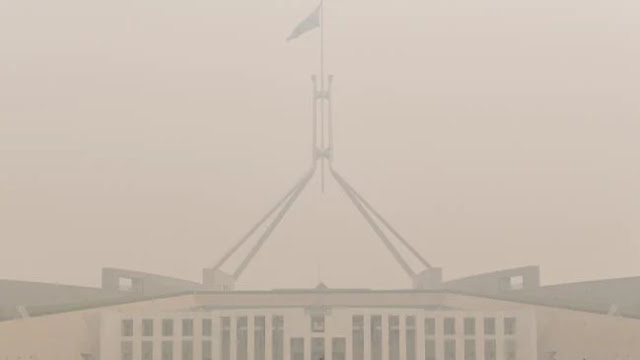 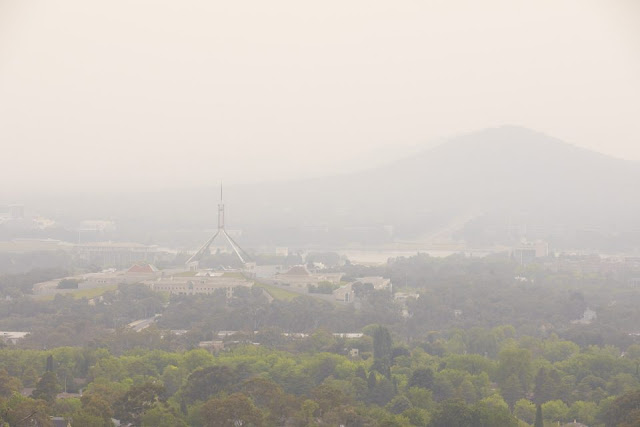 Parliament House can only just be made out. 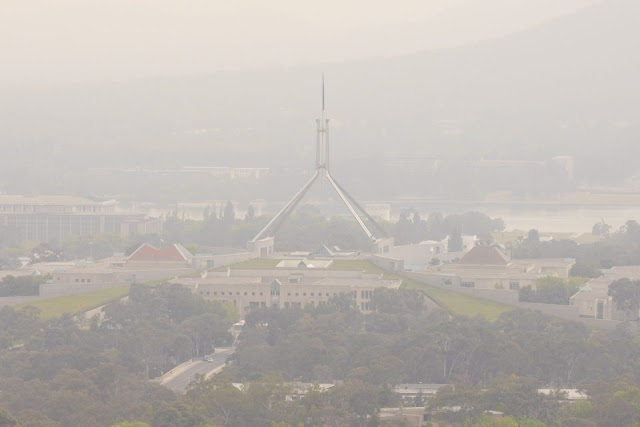 Another view of Parliament House.

Posted by BytesMaster at 2:55 AM