My wife, Kate, drives a Fiat 500, which is a very small car. When she drove it to the office after purchase, the occupant next door asked whether she would be parking it or keeping it in her handbag. Someone else commented ‘I crap bigger than that!” Okay, I admit it, that was me. 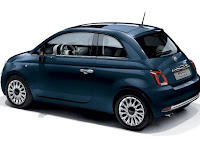 . . . and this is an example of size comparison: 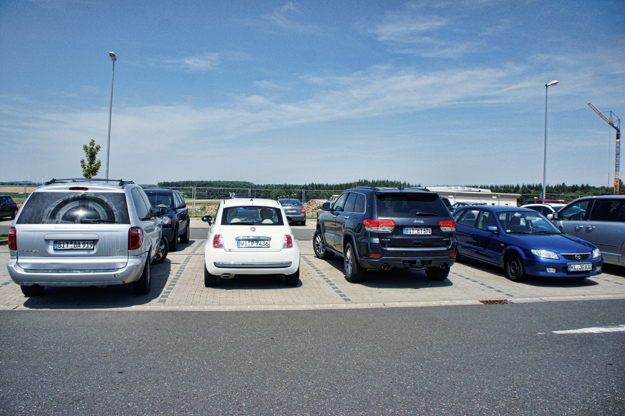 I mention this because I came across some photographs from the past showing women with a car known as the Peel P50. Here are the photographs: 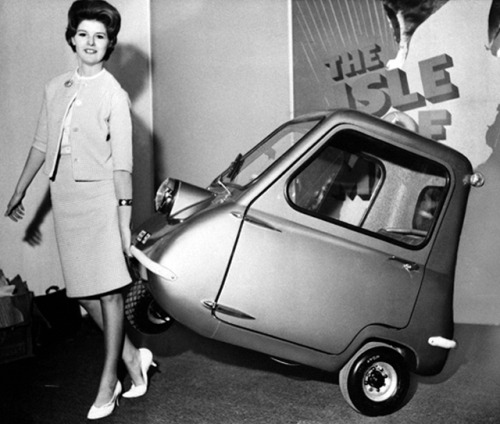 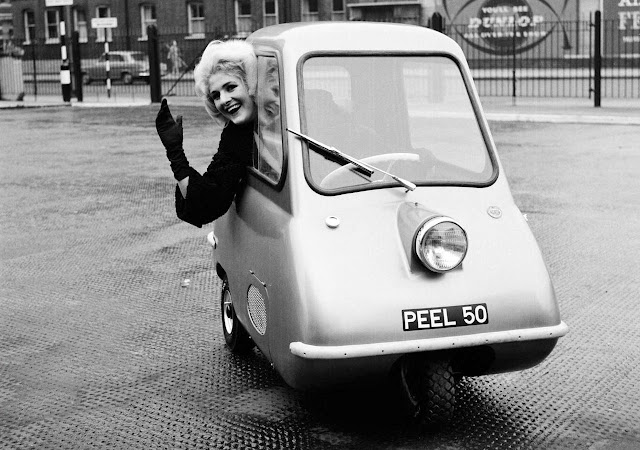 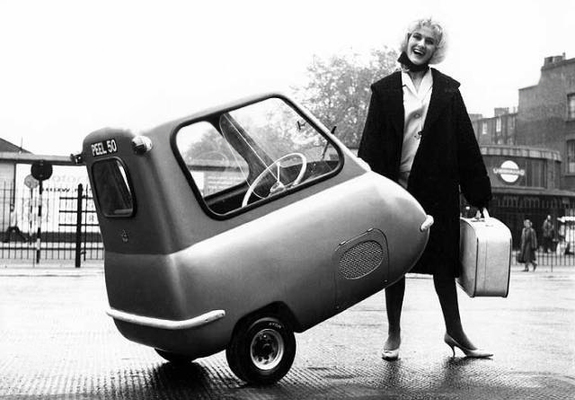 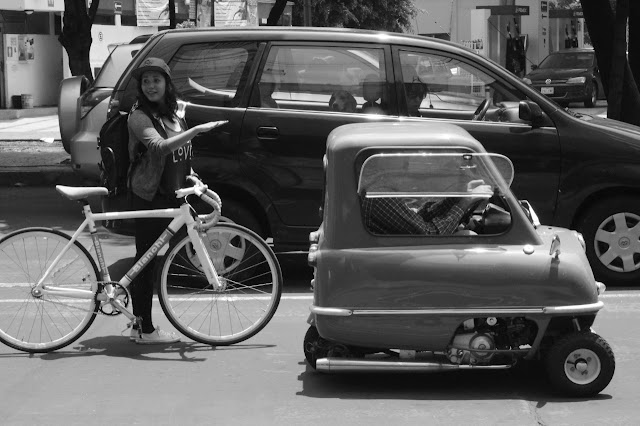 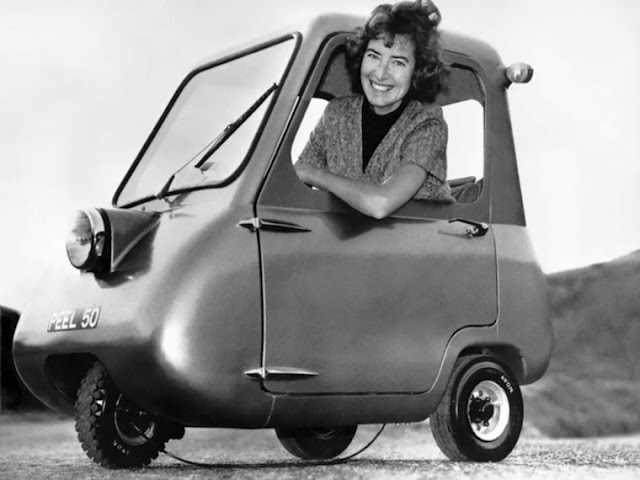 I kid you not, this is (was) a real car, one that makes the Fiat 500 look like a 4 wheel drive in comparison.

The Peel P50 is a three-wheeled microcar originally made from 1962 to 1965 by the Peel Engineering Company on the Isle of Man. It was listed in the 2010 Guinness World Records as the smallest production car ever made. It had no reverse gear, but a handle at the rear* allows the very lightweight car to be manoeuvred physically when required.

Designed as a city car, it was advertised in the 1960s as capable of seating "one adult and a shopping bag". The vehicle's only door was on its left side and equipment included a single windscreen wiper and one headlight. Standard colours were Daytona White, Dragon Red, and Dark Blue. The 1963 model retailed for £199 when new (about £6,600 in 2019, or US$8,500). The company produced 50 P50s and only 27 are known to still exist, one of which was sold for a record US$176,000 at a Sotheby's auction in March 2016.

In 2010 Peel Engineering Ltd. in England started remaking the P50 and Trident models from its premises in Sutton-in-Ashfield, England. Externally this car is very similar to the original, bearing the same dimensions and curb weight as the original, but with mechanical differences in the suspension, steering, and drive-train, as well as a fully functioning reverse gear, ensuring they are road legal on today's roads. Petrol models with a 49 cc, four-stroke engine are being produced, as well as electric models with an electric moped motor and gelled-electrolyte batteries. The top speed of both cars is about 28 mph (45 km/h).

*Some of the pictures show the car being lifted/moved by the front.  Otto 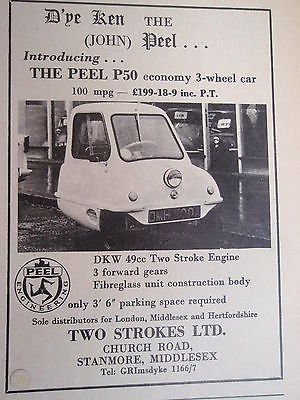 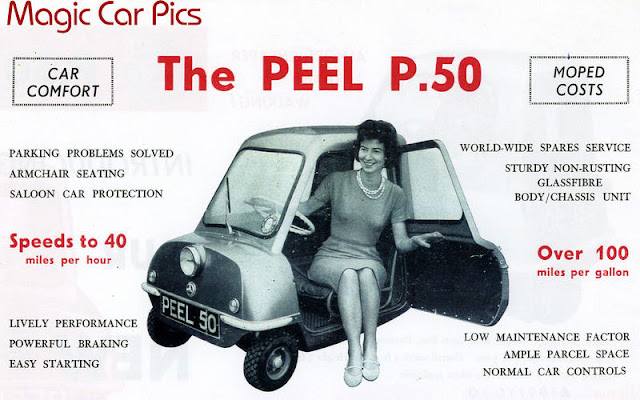 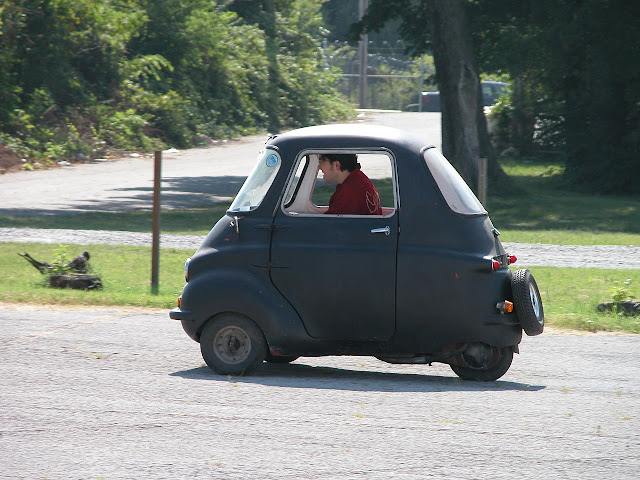 The Scootacar (pictured above) was a British three-wheeled microcar built in Leeds by Scootacars Ltd a division of the railway locomotive builder, the Hunslet Engine Company, between 1957 and 1964.

Built because the wife of one of the directors wanted something easier to park than her Jaguar, the shape of the car was designed by Henry Brown by sitting on a Villiers engine and then having an assistant draw an outline around him.

The body was built in fibreglass and was tall for its size being 60 in (1,524 mm) high, 87 in (2,210 mm) long and only 52 in (1,321 mm) wide. It was nicknamed "the telephone booth". Two people could be carried with a passenger behind the driver or alternatively just squeezed in alongside.

Power came from a rear-mounted Villiers 9E 197 cc single-cylinder two-stroke engine coupled to a four-speed motorcycle-type gearbox and chain drive to the single rear wheel. Steering was by handlebars. The top speed was 50 miles per hour (80 km/h).

Production stopped in 1964 after a total of about 1000 Scootacars were made, but only about 20–30 had the larger engine. 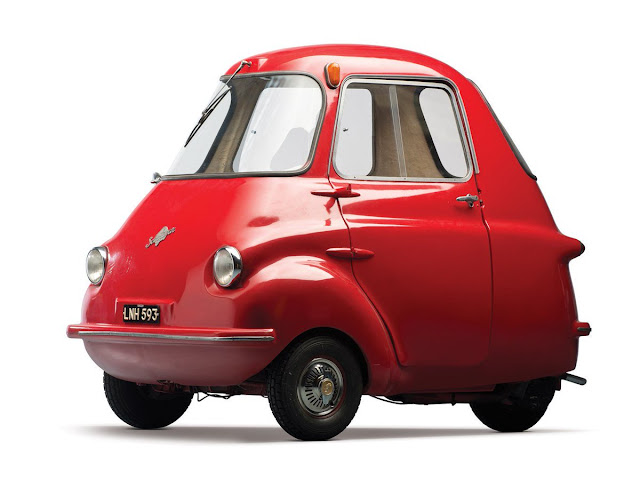 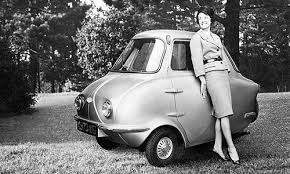 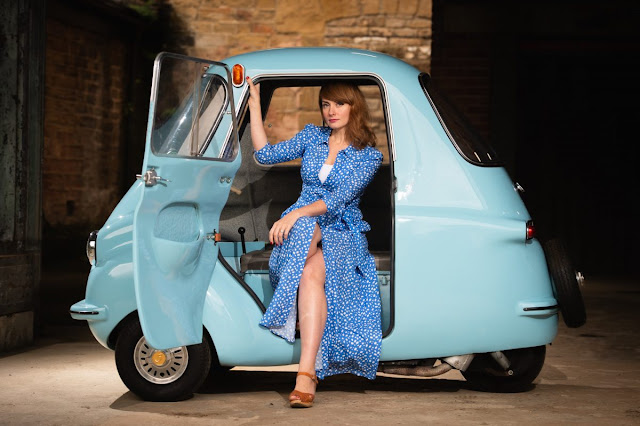 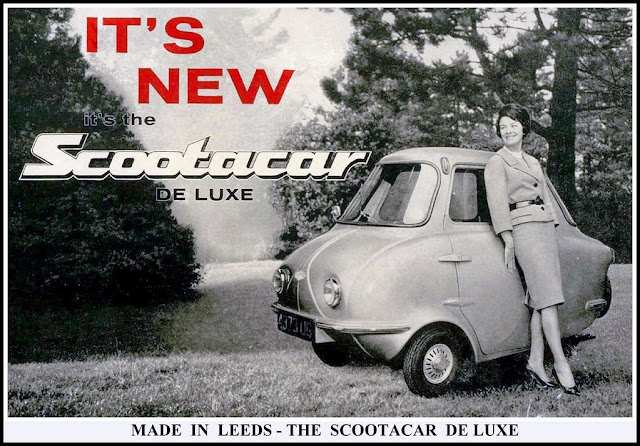 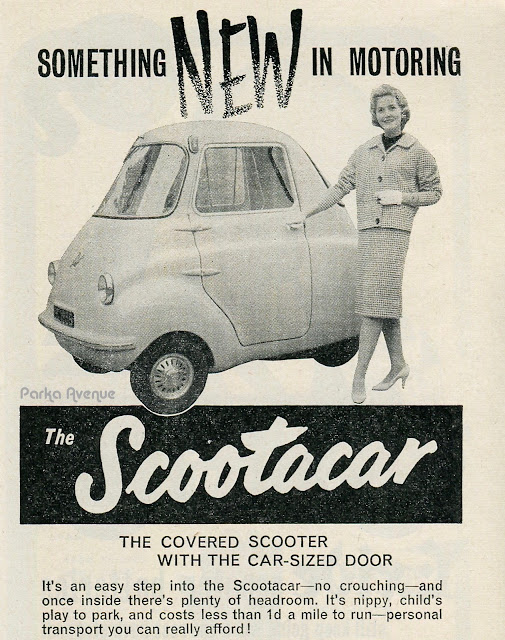 By the way, here is some small car advertising from the 1960’s: 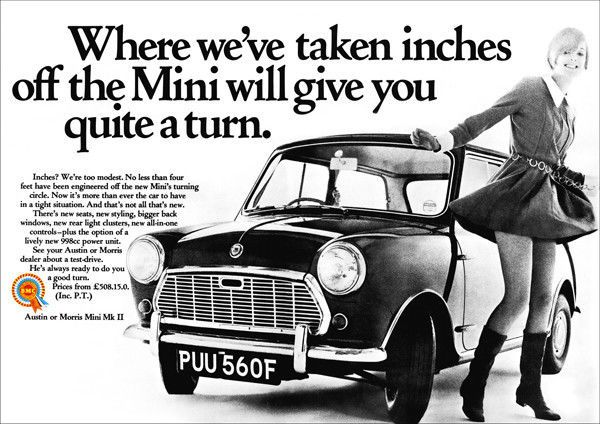 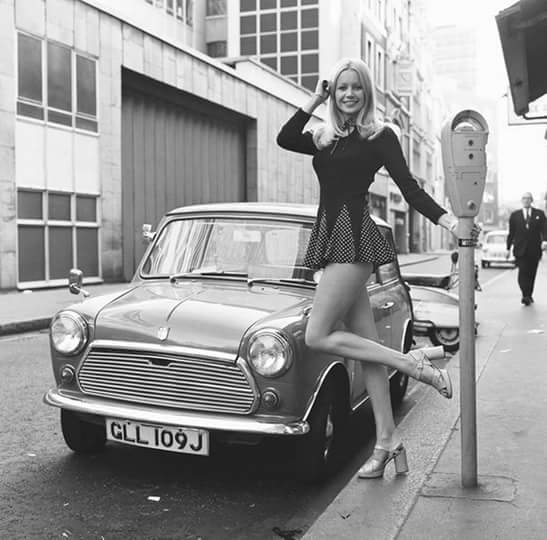 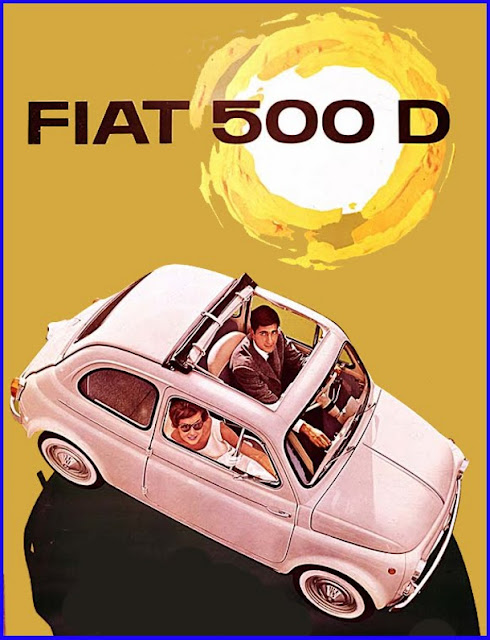 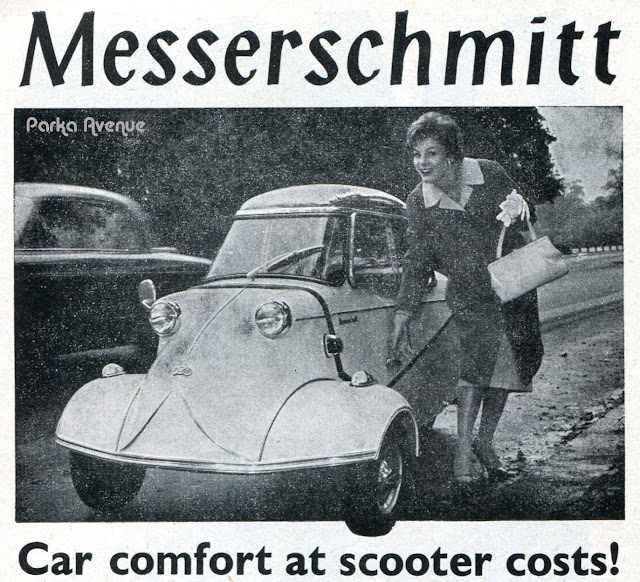 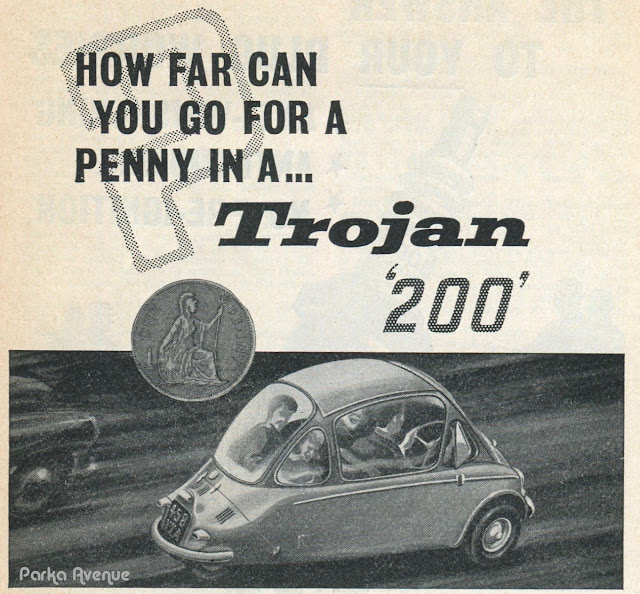 It is often said that men who drive large cars (take note,Steve) are often compensating for small penile size. If that is true, the following must be correct: 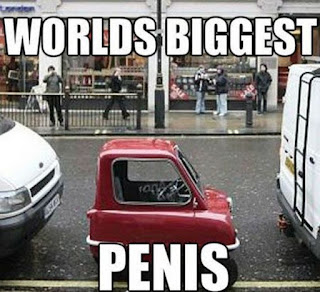