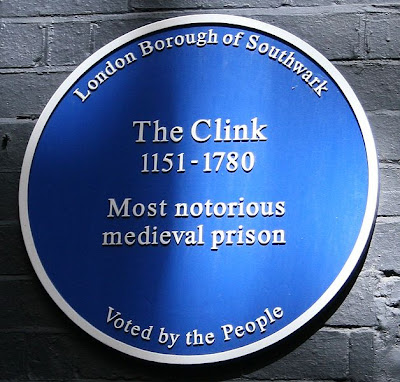 The expression “the clink” for jail derives from a notorious prison in Southwark England.
The prison, nicknamed the Clink Prison or The Clink for short, eventually gave that name to the area.  It functioned from 1151 until 1780 and was built and owned by the Bishop of Winchester, that person usually being the Chancellor, or the Treasurer, of the King. The prison functioned both as a general prison by virtue of his royal appointments and court functions, and as part of his responsibility for the keeping of the peace of the manor.
The Clink was possibly the oldest men's prison and probably the oldest women's prison in England, women being confined there from 1246. It was used for the detention of religious non-conformists (both Protestant and Catholic), depending upon which faith was in control.
The prison fell into disuse after the English Civil War (1642-1651), though it was described in 1761 as being "a very dismal hole where debtors are sometimes confined, but little used". The Clink was burned down during riots in 1780 and never rebuilt.
Shakespeare is recorded as visiting his friend there.
The name of the prison has given rise to a general expression of being “in the clink”, meaning being in prison. It is believed that the term “The Clink” derives from either the sound made by the prison's metal doors as they closed, or to the rattle of the chains the prisoners wore (I would have though the latter, otherwise it might more accurately have been called “The Clang”).
Today there is a warehouse on the site of the old prison with a Clink Museum in the basement, still containing the cells, torture devices and other mementos of its horrific past. It is located on Clink Street.

There are some other interesting aspects associated with the name and the area.
Liberties:
From the early days, England had various administrative areas:
• The basic area was the Hundred The origin of the term is not clear, it may have meant the area of land required to provide one hundred men under arms, or containing one hundred homesteads, or sufficient land to provide for one hundred families, or simply a small area that was one hundredth of a larger area. It was introduced by the Saxons between 613 and 1017, had an elder who was in charge and a meeting hall where the men of the Hundred discussed and determined local issues, administered justice and conducted trials.
• Some larger and more populous Hundred were divided into Half Hundreds.
• All Hundreds were divided into Tithings, which contained ten households.
• The basic unit of land was called the hide, which was enough land to support one family. It varied in size from 6 to 12 hectares, depending on the quality and fertility of the land.
• Above the Hundred was the area known as a Shire, under the control of a royally appointed official who was charged with keeping the peace, collecting rents and generally keeping order. Known as the Reeve, he was the chief officer and steward, under the king, of the area and the overseer of the manor for the local Lord. . The office of Reeve, also known as the Shire Reeve, has given rise to the later office of Sheriff.
• Boroughs were areas with self governing townships.
• Later, areas of counties and parishes developed, although Hundreds existed simultaneously with counties for many years. Hundreds remained used to define parliamentary constituencies until 1885. Whether Hundreds were under the jurisdiction of the Crown via the Sheriff or privately administered through the appointment of a steward, their main function remained the administration of law and the keeping of the peace. The Hundred courts met each few weeks, conducted trials and administered the frankpledge system whereby groups within the Hundred had to produce a man suspected of a crime, otherwise the whole group would be fined. The frankpledge system lasted until the 15th century when constables operating under justices of the peace took over, however the courts continued until 1867 when County Courts were established.
To make things more complicated, there were also areas known as Liberties. . Originating in the Middle Ages, a liberty was an area in which the Monarch’s right to receive income was revoked and where land was held by a mesne lord, that is, one who had vassals who held land from him, but who was himself the vassal of a higher lord.
A Liberty was usually known by the name of the area, such as (by way of example) the Liberty of Westminster, sometimes shortened to Westminster Liberty.
Defined by the nature of their tenure rather than by their physical area, liberties were independent of the system of hundreds and boroughs. They varied in size from quite large to small and could be found confined to a certain location in an area or widely scattered.
Although what remained of Liberties were generally ended by legislation in 1888, the Inner temple and the Middle Temple (two of the four Inns of Court in London, professional associations of barristers and judges) remain as Liberties, as does the City of London. Without going into detail, suffice to say that this confers certain benefits and significant independence.
Liberty of the Clink:
As has been noted, the Bishop of Winchester built and owned the Clink. Both the Bishop’s Manor, also known as the Clink, and the prison were (curiously) built alongside the Bishop’s residence.
The Bishop held an area in Southwark by way of a Liberty which was located on the south bank of the River Thames opposite the City of London. Comprising an area of about 28 hectares, it had been sold to the Bishop of Winchester in 1149 by the original holder, Bermondsey Abbey. It became known as the Liberty of Winchester but, after the prison had been built and the use of the name “the Clink had spread to the Bishop’s manor, the Liberty also became known as the Liberty of the Clink. The first recorded use of the term Liberty of the Clink is in 1530, probably informally to avoid confusion with the other manors in Southwark.
Interesting aspects of the area known as The Liberty of the Clink:
The Liberty lay outside the jurisdiction of the City of London, and that of the county authorities of Surrey,. As a result, activities forbidden or illegal in those areas were permitted within the nearby Liberty of the Clink.
In 1161 the bishop was granted the power to licence prostitutes and brothels in the Liberty, a business useful to the Church both to accommodate female orphans and to service the clergy (who before the Reformation were not allowed to marry).
The prostitutes so licensed were known as “Winchester Geese”, to "be bitten by a Winchester goose" meant "to contract a venereal disease", and “goose bumps” was slang for symptoms of syphilis.
Many of the prostitutes are buried in Cross Bones, an unconsecrated graveyard. The earliest recorded reference to the Cross Bones graveyard is from historian and antiquarian John Stow, in his Survey of London in 1598:

I have heard of ancient men, of good credit, report that these single women were forbidden the rites of the church, so long as they continued that sinful life, and were excluded from Christian burial, if they were not reconciled before their death. And therefore there was a plot of ground called the Single Woman's churchyard, appointed for them far from the parish church.

The expression “single women” in this context meant prostitutes.
By 1769 it had become a pauper’s cemetery.
It is believed that there are 15,000 persons buried there.
The graveyard was closed in 1853 because it was unable to accommodate any further bodies and in that further burials were deemed "inconsistent with a due regard for the public health and public decency."
Excavations carried out by the Museum of London between 1991 and 1998 in connection with a rail line revealed a highly overcrowded graveyard with bodies piled on top of one another. The cause of most of the deaths was smallpox, tuberculosis, Paget’s disease, osteoarthritis and Vitamin D deficiency.
A dig in 1992 uncovered 148 graves, dating from between 1800 and 1853. Over one third of the bodies were perinatal (between 22 weeks gestation and seven days after birth). A further 11 percent were under one year old. The adults were mostly women aged 36 years and older
Proposals to develop the site have been met by protests and the gates are continually decorated in homage to those buried there. 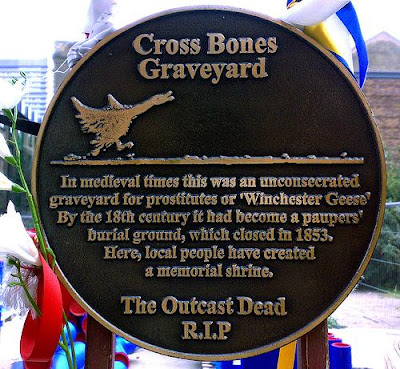 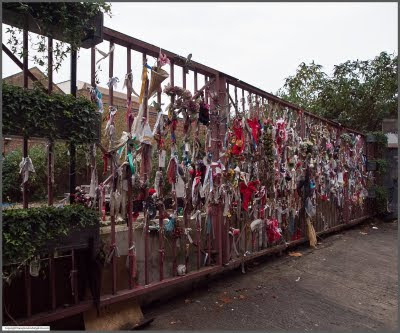 Theatres and playhouses were allowed in the Liberty of the Clink, although not in London. The most famous theatre within the Clink is the Globe Theatre where Shakespeare had his plays performed. Another noted one was The Rose, where Shakespeare and Christopher Marlowe both premiered plays.
Bull and bear baiting were also permitted.
The Liberty was abolished in 1889, when the Local Government Act 1888 merged all remaining Liberties into counties, the Liberty becoming part of the County of London.
Posted by BytesMaster at 10:57 PM

Email ThisBlogThis!Share to TwitterShare to FacebookShare to Pinterest
Labels: Clink