Of History, Dutchmen and Plates... 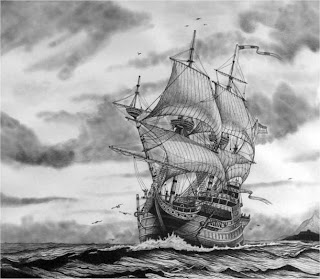 It is interesting to note the role of the Dutch, the Dutch East India Company and pewter plates in early Australian history.
Following is a chronology of some of those events:
1606: Willem Janszoon (c. 1570–1630), a Dutch navigator, became the first European known to have seen, and made landfall on, the coast of Australia. Janszoon was captain of the Dutch East India Company ship Duyfken (“Little Dove”) and was under instructions to search for more trade outlets in “the great land of New Guinea and other East and Southlands.”
Sailing from New Guinea to the Gulf of Carpenteria, he landed at the Pennefather River on the western shore of Cape York in Queensland, near what is now the location of Weipa, the first recorded European landfall on the Australian continent. Though there have been suggestions that earlier navigators from China, France or Portugal may have discovered parts of Australia, the Duyfken is the first European vessel definitely known to have done so.
Janszoon mapped 320 kilometres of coastline but left thinking that the area was an extension of the south coast of New Guinea. He had a hard time of it, finding the land swampy and inhospitable and the locals hostile. Ten of his crew were killed during various shore trips.
Janszoon called the land he had discovered “Nieu Zeland” after the Dutch province of Zeeland, but the name was not adopted and was later used by Abel Tasman for New Zealand..
1616:

In 1616 Captain Dirk Hartog (1580 – 1621), master of the Dutch East India Company ship Eendracht (meaning “unity" and pictured above), stepped ashore on an island off the coast of northern Western Australia, The island is now known as Dirk Hartog Island. This was the second recorded European expedition to land on the Australian continent but the first to do so on the western coastline. Hartog named the area Eendracht’s Land but the name has not endured, the area now being known as Cape Inscription.
Before he left, Hartog had a pewter plate nailed to a post, with an inscription: 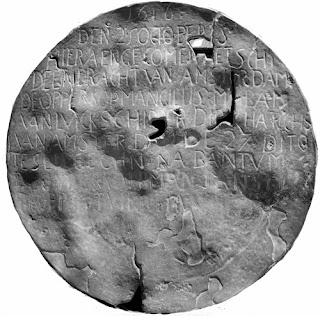 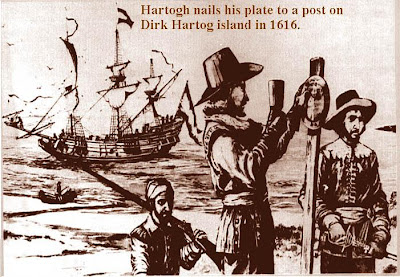 Hartog charted the shoreline to the North West Cape. This was incorporated in mapmaking in Holland, with the result that names for a vague southern continent – Terra Australis, Nova Hollandia (New Holland) and South Land – were at least for a time replaced by Eendracht’s Land. During the rest of the 17th century most of the west, south, and north coasts of Australia was mapped by Dutch navigators of the Dutch East India Company, thereby gradually unveiling the Western Australian coastline to the world's cartographers.
(As a disgression, the name Australia derives from Latin "australis" meaning "southern", and dates back to 2nd century legends of an "unknown southern land" (terra australis incognita). The explorer Matthew Flinders named the land Terra Australis, which was later abbreviated to the current form. Previously, when the Dutch explored the area they named it Nova Hollandicus or New Holland.
Flinders later renamed the land Australia in a chart compiled in 1804 whilst he was held prisoner by the French in Mauritius. When he returned to England and published his works in 1814 he was forced to change the name to Terra Australis by the British Admiralty. Governor Macquarie of New South Wales became aware of Flinders' preference for the name Australia and used it in his dispatches to England. In 1824 the British Admiralty finally accepted that the continent should be known officially as Australia.)
1697: 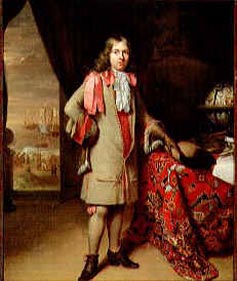 In 1697, Willem Vlamingh (1640 – 1698) landed on the island on which Hartog had left his plate, finding it half buried in the sand after the post on which it been nailed had rotted.
Vlamingh had been sent by the Dutch East India Company in 1696 on a rescue mission to Australia's west coast to look for survivors of the Ridderschap van Holland that had gone missing two years earlier. On 29 December 1696 he had landed on an island which he described in his journal:

"I had great pleasure in admiring this island, which is very attractive, and where it seems to me that nature has denied nothing to make it pleasurable beyond all islands I have ever seen, being very well provided for man's well-being, with timber, stone, and lime for building him houses, only lacking ploughmen to fill these fine plains. There is plentiful salt, and the coast is full of fish. Birds make themselves heard with pleasant song in these scented groves. So I believe that of the many people who seek to make themselves happy, there are many who would scorn the fortunes of our country for the choice of this one here, which would seem a paradise on earth".

Having originally sighted it through the mist, he named it Mist Island. When exploration revealed numerous creatures that he thought were large rats, he imaginatively renamed the island Rattennest, or Rats’ Nest, the name remaining today as Rottnest Island. In fact, the creatures were not rats but quokkas.
His naming of the Swan River after the numerous black swans that he saw was more accurate.
When he found Hartog’s plate on 4 February 1697, he took it back to Holland with him, leaving another nailed to a cypress pine post from Rottnest Island. The plate bore an inscription that read:
The Hartog plate remains on display in the Rijksmuseum in Amsterdam. It is the oldest-known artifact of European exploration in Australia still in existence and is therefore evidence of the first confirmed visit by Europeans.


1697 The 4th February is here arrived the ship The Geelvinck for Amsterdam. The Commodore and Skipper William De Vlamingh of Vlielandt, Assistant Joannes Bremer of Copenhagen Upper Steersman Michil Bloem of The Bishopric of Bremen The Hooker The Nyptangh Skipper Gerrit Colaart of Amsterdam Assit Theodoris Heirmans Ditto Upper Steersman Gerrit Geritson of Bremen The Galliot The Weeseltie Commander Cornelis De Vlamingh of Vlielandt Steerman Coert Gerritsen of Bremen Sailed from Here with our fleet the also The Southland Further to Explore and Bound for Batavia.

The Hartog plate remains on display in the Rijksmuseum in Amsterdam. It is the oldest-known artifact of European exploration in Australia still in existence and is evidence of the first confirmed visit by Europeans. 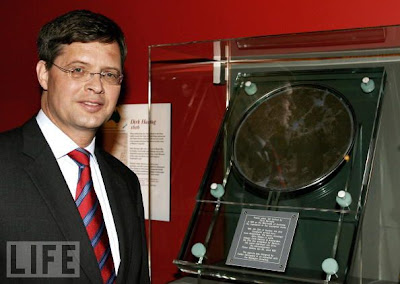 1801:
It is surprising at how much activity Dirk Hartog Island, a remote island in an out of the way location, seemed to attract. 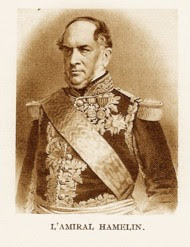 In 1801 the island was visited by members of Nicolas Baudin's French expedition. Baron Emanuel Hamelin, the skipper of the Naturaliste, decided that it would be sacrilege to remove the Vlamingh plate from the place where it had remained for more than a century. Consequently he nailed the plate to a new post, putting it in place in the rock cleft at the top of the cliff.
Baron Hamelin left his own inscription on a piece of lead sheet, nailed to a post on a prominent headland elsewhere on the island, without giving a precise description of its location. That lead plate has remained undiscovered since then, and may well lie buried below sand at a headland on Dirk Hartog Island.
Hamelin’s decision to leave the plate was not shared by one of his junior officers, Louis de Freycinet, who believed that its proper place was in a French museum.
1818: 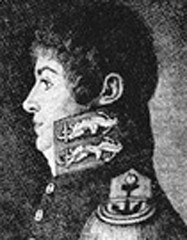 De Freycinet (1779 – 1842) worked his way up the ranks until he eventually had command of his own ship.
In 1818 whilst in command of the Uranie he returned to Dirk Hartog Island with his wife, Rose, who had stowed away on his ship with his assistance. The Vlaminghe plate was recovered and De Freycinet continued his voyage. 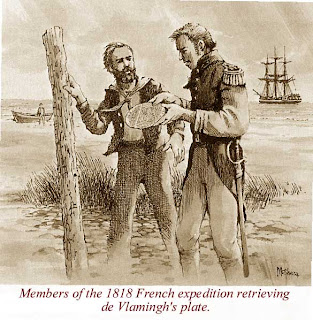 After being shipwrecked in the Falkland Islands the plate and other materials from the Uranie voyage were later transferred to another ship it and taken to France, where it was presented to the Academie Fancaise in Paris.
The plate was displayed for some time by the Academy but it was then lost for over one hundred years when put into a small room that was used to store old copper engraving plates. It was rediscovered in 1940 and was presented to Australia in 1947 in recognition of Australian losses in the defence of France during the two world wars. It is now on display in the Western Australia Maritime Museum in Fremantle: 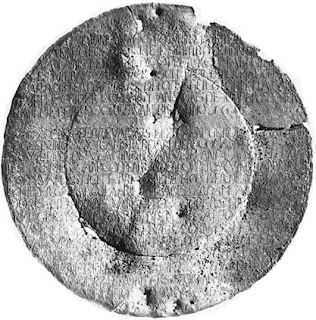 As noted above, in 1801 Hamelin visited Dirk hartog island and nailed the Vlamingh plate to a new post.  In 1818 De Freycinet  purloined the pewter plate, leaving the solitary bare post behind.  In January 1822 British navigator Philip Parker King visited the island and wrote his name and the date, 1822, by hammering in a series of nails.  It is Australia's first recorded graffiti and tagging.

Hamelin's Post was removed during a survey of Point Inscription in 1907 and is now in the possession of the West Australian Maritime Museum.  The date 1822 can be seen in the following photograph, with the remnants of King's name above the date:

Posted by BytesMaster at 7:16 AM

Email ThisBlogThis!Share to TwitterShare to FacebookShare to Pinterest
Labels: Plates