The following pics come from the collections of the State Library of NSW.

They are fascinating glimpses of different times... 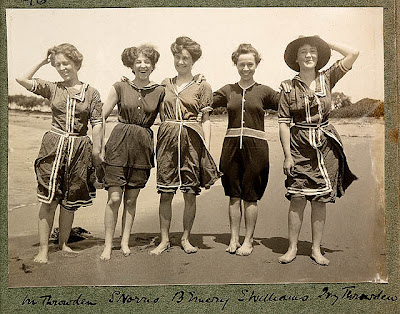 (Click on the images to enlarge).
The caption with the pic reads:
﻿Women in bathing suits on Collaroy Beach, 1908, photographed by Colin Caird
Models from left to right: M. Throwden, S. Norris, B. Emery, E. Williams, Ivy Throwden
Insfar as there is no commentary on the State Library website, I will add my own:
-     Do the costumes of numbers 1, 3 and 5 seem like variations on a theme?  Perhaps they're sisters and their mum knocked their costumes up on the turn of the century Singer.
-    And is it just me or do the tops of 2 and 5 seem a bit daring, even today?  What would they have thought in 1908?
-    The hairstyles of 2 and 5 are a bit way out, like a modified Princess Leia from a long time ago in a galaxy far, far away. 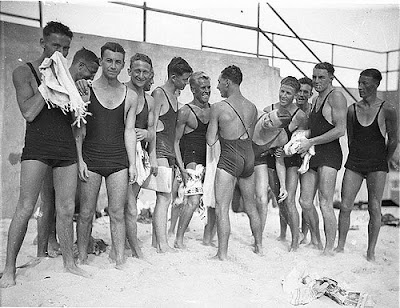 The following text is from the Library commentary about the pic:
Young male surfers ("The Pier Club Mob") tease Alf "Bait" Gould about his backless swimsuit (a gift from his girlfriend), Bondi Beach, 10 October 1932, by Sam Hood

Notes: Sydney Exposures book and exhibition caption: The boys on the beach, Bondi, 10 October 1932 : The athletic young man with the backless cotton costume risks arrest. Regulations from the turn of the century prevented men from exposing their upper torsos on the beach, but from the late 1920's, more adventurous bathers abandoned the traditional woollen skirted costume.
["The Pier Club" was first used by the changing sheds attendant, George Proudfoot, who said "You bloody Pier Club Mob will have to stop getting changed on the beach." The pier under which they changed was one of two on Bondi Beach.]
[l to r: Frank Fitzgerald, Roy "Ghandhi" (or "Ritchie" ?) Richards (compositor), Sol or Solly Marks, Louie Joseph, Les Pointer, Charlie Grubbs, Ray "Blondie" Pointer (printer at the Sun newspaper), Alf "Bait" Gould (used to swim alone beyond the breakers, hence the nickname "Bait" as in "Shark Bait", and worked at the Sun), Frank "Fonco" Ward of Paddington or Colin Stanton (?), Jack Thomas, Joe Johnson (carpenter from Bondi), unknown smoker, and Charles Martin]
Posted by BytesMaster at 1:22 AM

Email ThisBlogThis!Share to TwitterShare to FacebookShare to Pinterest
Labels: Swimsuits