So, dear Byters, did we all enjoy Christmas lunch? And when it was finished, were the leftovers tucked away in the fridge under Glad Wrap? Wonderful stuff, cling wrap, although a bit of a bastard to put on and take off, especially from a rolled up newspaper.
Before cling wrap there was cellophane, still hugely in use today. It was invented in 1912 by one Jacques E Brandenberger who in 1900 saw red wine spilled on a tablecloth and wanted to come up with a material that repelled such spills, instead of absorbing them. Eventually he got the consistencies and attributes right and named his invention cellophane, from the words cellulose and diaphane ("transparent").
Originally manufactured in France, a manufacturing company was established in the US in 1924. The chemical company Du Pont then spent 3 years on coming up with a means of making the cellophane fully water proof. Whilst the product had been able to hold water, it was nonetheless permeable to water vapour. By 1927 Du Pont succeeded in making the product moisture proof. By 1938, cellophane accounted for 10% of Du Pont's sales and 25% of its profits.
Cellophane remains in use today, primarily as a packaging material for a variety of food items, its attraction being that it is airtight and watertight, yet visible.
The fact that cellophane is airtight must have been known to the Du Pont execs and to the Du Pont advertising agencies in the mid 1950’s, as well as to the editors of the magazines that carried Du Pont advertising.  Did they not know in the 1950's that babaies need oxygen to survive.
That is why these ads are not only disturbing, they are totally inexplicable. How does showing babies in cellophane promote the product?  The features sought to be conveyed for cellophane - freshness, preservation, visibility - have nothing ro do with babies wrapped in the stuff. 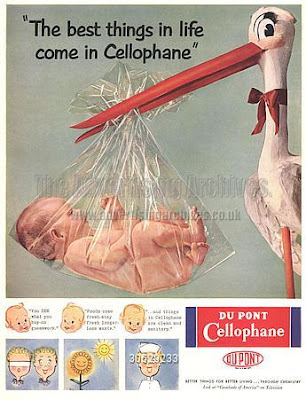 ﻿(Click on the ads to enlarge - not all enlarge, however, it depends upon the size of the original pic on the net). 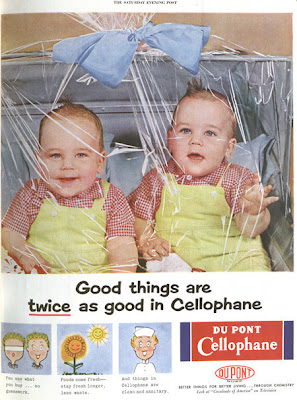 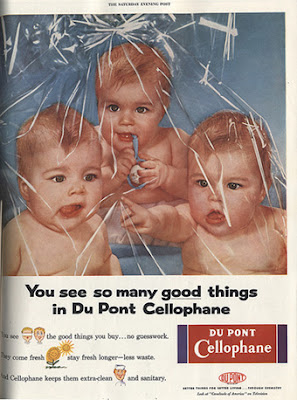 Weird!
And to show that Du Pont cellophane ads aren't just inappropriate about babies, have a look at the following sexist and racist ads.  Hard to believe that something as simple as cellophane could cross so many PC boundaries. 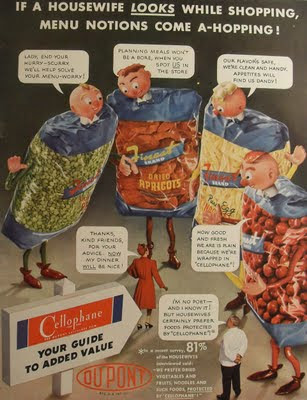 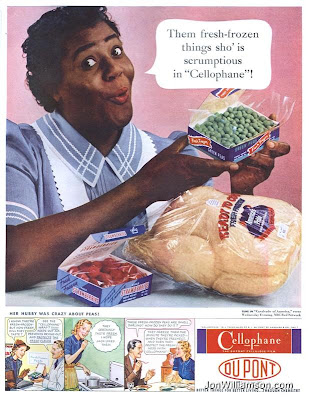