A Merry Christmas to all Byters.
May you have warm words on a cold evening,
a full moon on a dark night,
and the road downhill all the way to your door.

A bit late for me to give you some gift ideas, but these past Christmas advertisements may assist for next Christmas… 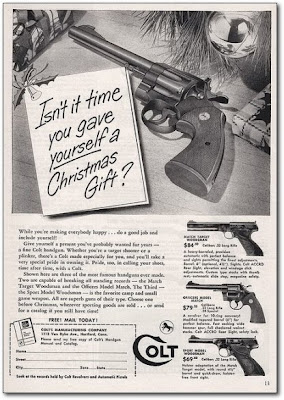 (Click on pics to enlarge).
An ad from 1939. Ironic in that the third handgun depicted looks like a German Luger, beloved of Nazi officers. 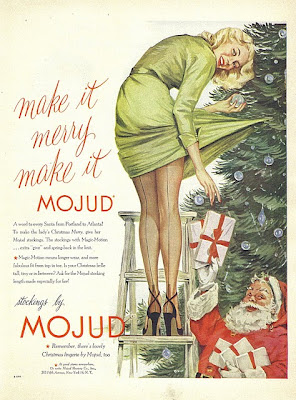 A 1951 ad, in the days when ads did not need to be PC, when sexism in advertising was the norm, when women in killer heels apparently climbed step ladders and when Santa was able to look up a woman’s dress whilst she laughed. 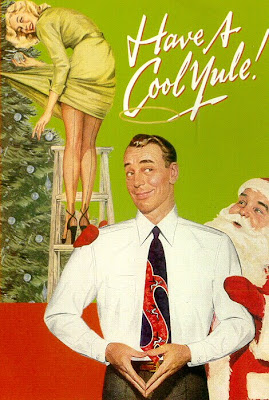 Another in the same vein. Not sure what the message is, why Santa has his arms around the male; why there is a focus on the legs and skirt of the woman, yet no one is looking at her; and what the hands pointing at the fellow’s groin are supposed to indicate. Weird. 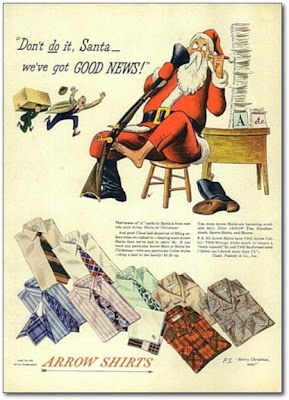 Another ad from the 1950’s. Santa is about to commit suicide with a blunderbuss because he is unable to fulfil the request for Arrow shirts. Question: Is this ad humorous or disturbing? Maybe Christmas humour was different 50 years ago. 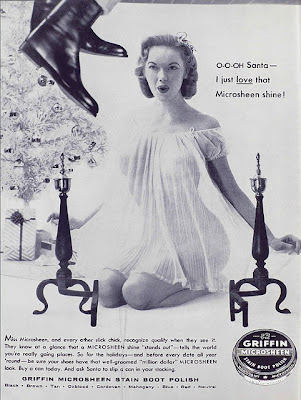 An ad from the 1950’s that was probably daring in its day and, from what I gather, was from Playboy. It’s an ad for shoe polish. How does a mind come up with an idea to use sex, Santa and Santa’s boots to sell shoe polish??? The obvious question, though, is what is Santa doing hanging in the air? Is it meant to depict Santa coming down some invisible chimney or is it another Santa suicide?  Santacide? 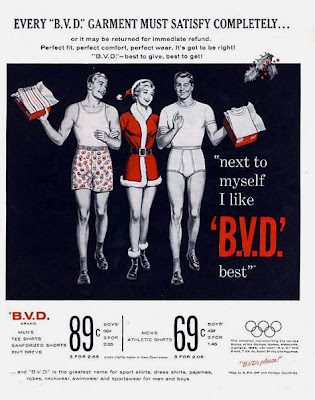 The office Christmas party? Another ad that is just so wrong: a sexy woman clad in a short Santa skirt with a couple of guys in their underwear. Not to mention the mistletoe in the air at right. Where are they going and what will happen. I don’t want to know. 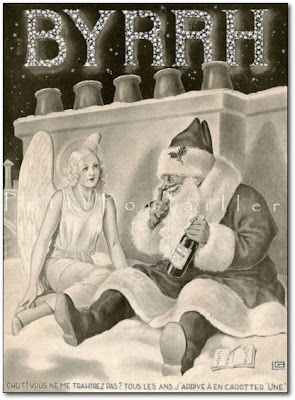 We’ve already seen ads that portray Santa as a dirty old man, a peeping tom and a suicidal depressive. Bet you didn’t know that the role model of Christmas also has a drinking problem. This is a 1934 French ad for Byrrh wine. Okay, I can dig that Santa has taken to the bottle because of stress (witness the book with the checklist on the snow next to him) but what is the sexy angel doing there? 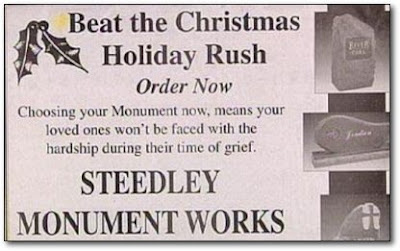 Beat the Christmas rush to buy a tombstone??? Buy one for yourself as a Christmas gift to your family. Sick.

One final item…
Take the time to have a look at one of my favourite Christmas videos at:
http://www.youtube.com/watch?v=EQ3Gm-JlESc
“Santa, you’re under arrest. You have the right to remain silent. You’d better not pout…”
“You’re not getting anything in your stocking. I know you. I know where you live. I will take you out and I don’t mean on a date, you #@**#!! ..."