Moments in History: Lillian Hellman and the House Committee on Un-American Activities

The House Committee on Un-American Activities (HUAC), a committee of the US House of Representatives, was tasked with investigating Communist activity.  HUAC’s hearings were not the same as the McCarthy hearings, which were held by the United States Senate's Subcommittee on Investigations April–June 1954 to investigate conflicting accusations between the United States Army and U.S. Senator Joseph McCarthy.
Nonetheless both made it their mission to investigate and root out alleged communists and communist sympathisers in positions of actual or supposed influence in United States society.
In 1947, HUAC held nine days of hearings into alleged communist propaganda and influence in the Hollywood motion picture industry. After conviction on contempt of Congress charges for refusal to answer questions posed by committee members, "The Hollywood Ten" were blacklisted by the industry. They later served prison terms after the Supreme Court in April 1950 turned down their appeal that such questioning violated their First Amendment rights. 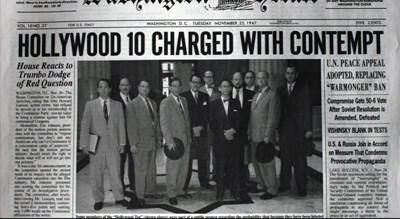 Eventually, more than 300 artists – including directors, radio commentators, actors, and particularly screenwriters – were boycotted by the studios. Some, like Charlie Chaplin, Orson Welles, Alan Lomax, Paul Robeson, and Yip Harburg, left the U.S or went underground to find work. Others like Dalton Trumbo wrote under pseudonyms or the names of colleagues. Only about ten percent succeeded in rebuilding careers within the entertainment industry.
Hearings began again in March 1951, While almost half of those testifying from the entertainment industry informed on their colleagues, others invoked the Fifth Amendment protection against self-incrimination. This guaranteed that they would not be hired for future work in the industry.
Noted playwright, author and screenwriter Lillian Hellman was one of the Hollywood personnel subpoenaed to testify before HUAC, which had heard testimony that she had attended Communist Party meetings in 1937. 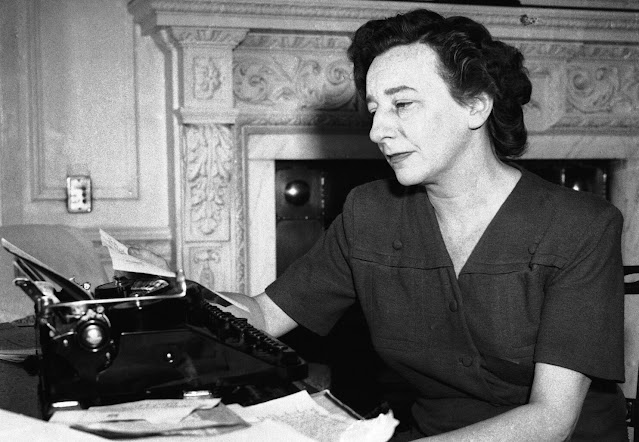 Lillian Hellman, 1945
In the following letter dated May 19, 1952 to HUAC’s chairman, Hellman offered to testify as to her own activities if she would not be forced to inform on others:

Dear Mr. Wood:
As you know, I am under subpoena to appear before your committee on May 21, 1952.
I am most willing to answer all questions about myself. I have nothing to hide from your committee and there is nothing in my life of which I am ashamed. I have been advised by counsel that under the fifth amendment I have a constitutional privilege to decline to answer any questions about my political opinions, activities, and associations, on the grounds of self-incrimination. I do not wish to claim this privilege. I am ready and willing to testify before the representatives of our Government as to my own opinions and my own actions, regardless of any risks or consequences to myself.
But I am advised by counsel that if I answer the committee’s questions about myself, I must also answer questions about other people and that if I refuse to do so, I can be cited for contempt. My counsel tells me that if I answer questions about myself, I will have waived my rights under the fifth amendment and could be forced legally to answer questions about others. This is very difficult for a layman to understand. But there is one principle that I do understand: I am not willing, now or in the future, to bring bad trouble to people who, in my past association with them, were completely innocent of any talk or any action that was disloyal or subversive. I do not like subversion or disloyalty in any form and if I had ever seen any I would have considered it my duty to have reported it to the proper authorities. But to hurt innocent people whom I knew many years ago in order to save myself is, to me, inhuman and indecent and dishonorable. I cannot and will not cut my conscience to fit this year’s fashions, even though I long ago came to the conclusion that I was not a political person and could have no comfortable place in any political group.
I was raised in an old-fashioned American tradition and there were certain homely things that were taught to me: To try to tell the truth, not to bear false witness, not to harm my neighbor, to be loyal to my country, and so on. In general, I respected these ideals of Christian honor and did as well with them as I knew how. It is my belief that you will agree with these simple rules of human decency and will not expect me to violate the good American tradition from which they spring. I would, therefore, like to come before you and speak of myself.
I am prepared to waive the privilege against self-incrimination and to tell you everything you wish to know about my views or actions if your committee will agree to refrain from asking me to name other people. If the committee is unwilling to give me this assurance, I will be forced to plead the privilege of the fifth amendment at the hearing.
A reply to this letter would be appreciated.
Sincerely yours,
Lillian Hellman

The Committee refused her request. she took the Fifth and was blacklisted. 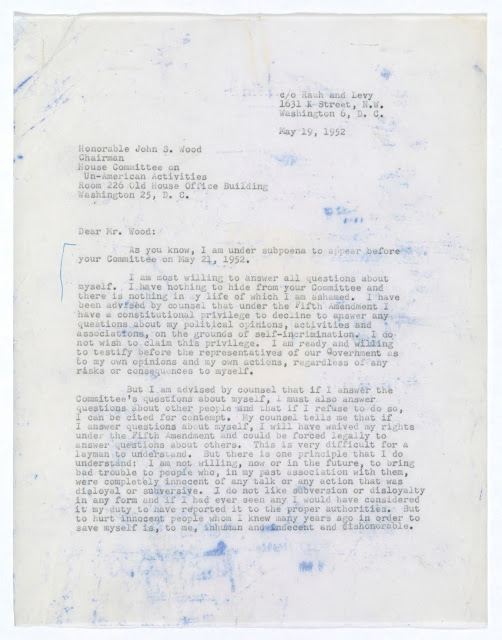 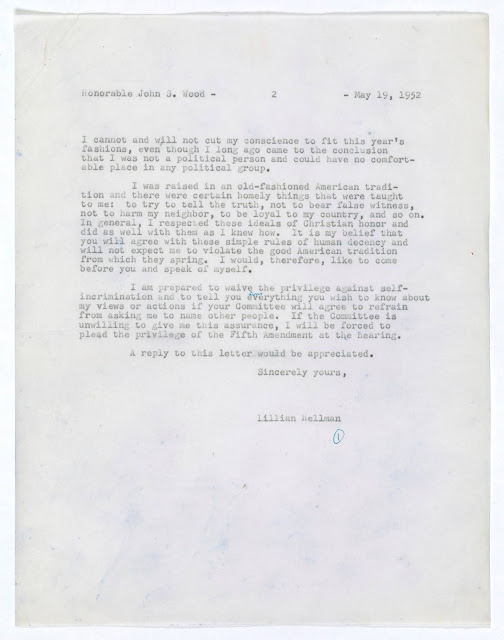