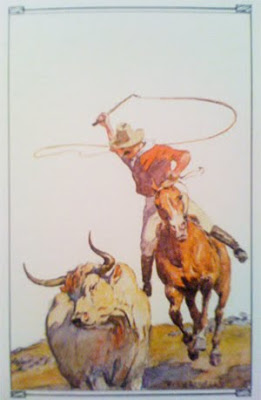 Performances of the Song:
Version by famous Oz folk singer Gary Shearston, who was singing folk songs when Noah was a lad and long before folk songs became popular:
https://www.youtube.com/watch?v=NY8XbbkN60s
The following rendition is by the Botany Bay Singers:
https://www.youtube.com/watch?v=YUb2fntE5HI
Paul Carroll:
https://www.youtube.com/watch?v=43mGsDwyfYs
________________
Lyrics:
The Overlander
Chorus:
So pass the billy round boys,
Don't let the pint pot stand there
For tonight we'll drink the health
Of every Overlander.
There's a trade you all know well
And it's bringing cattle over,
On every track to the gulf and back
Men know the Queensland drover.
I come from the Northern plains
Where the girls and grass are scanty
Where the creeks run dry or ten feet high
And it's either drought or plenty.
There are men from every land
From Spain and France and Flanders
They're a well mixed pack, both white and black
The Queensland Overlanders.
When we've earned a spree in town
We live like pigs in clover
And the whole dam cheque pours down the neck
Of many a Queensland drover.
As I pass along the road,
The children raise my dander
Shouting "Mother dear, take in the clothes
Here comes an Overlander".
There's a girl in Sydney Town
Who said "Please don't leave me lonely"
I said "it's sad, but my old Prad
Has room for one man only.
But I'm bound for home once more
On a Prad that's quite a goer
I can find a job with a crawling mob
On the banks of the Maranoa.