From the Vault:
From Bytes, Thursday, November 21, 2013
Death Spirals 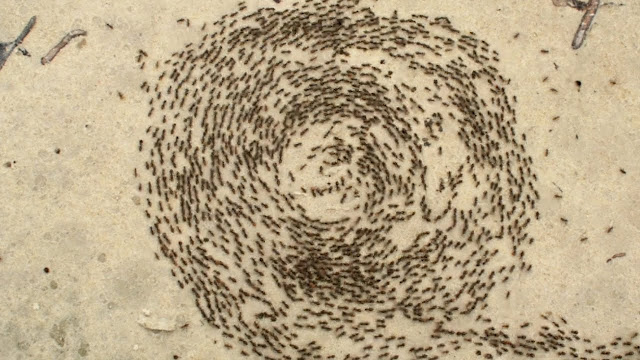 Watching an episode of CSI I saw techie Nick (George Eads) talk about ants. The episode opened with ants shown moving in an orderly fashion from a disaster, which Nick contrasted with humans who tend towards chaos and frenetic self preservation in crisis situations. At the end of the episode, Nick and DB Russell (Ted Danson) are watching a mass of army ants walking in a continuously moving circle. Nick explains that each ant is following the pheromones of the ant in front, the pheromones being given off to alert the rest of the colony to danger. Left to themselves in that moving circle, which is known as a death spiral or ant mill, the ants will eventually die of exhaustion unless the circle is broken.
Here are some links to see an ant death spiral and to read an explanation of it:
https://www.youtube.com/watch?v=LEKwQxO4EZU
https://www.youtube.com/watch?v=N0HoqjxfvJ4
https://www.youtube.com/watch?v=mv6DCZUq8_Y
A Wikipedia summary:

An ant mill is an observed phenomenon in which a group of army ants separated from the main foraging party lose the pheromone track and begin to follow one another, forming a continuously rotating circle. The ants will eventually die of exhaustion. This has been reproduced in laboratories and the behaviour has also been produced in ant colony simulations. This phenomenon is a side effect of the self-organising structure of ant colonies. Each ant follows the ant in front of it, and this will work until something goes wrong and an ant mill forms. An ant mill was first described by William Beebe in 1921 who observed a mill 1,200 feet (365 m) in circumference. It took each ant 2.5 hours to make one revolution. Similar phenomena have been noted in processionary caterpillars and fish.

The spiral continues until it is broken up in some way or the ants die of exhaustion. It can result in the loss of the entire colony.
It is tempting, as others have done, to use ant death spirals as a metaphor for the human condition.
In 1910 scientist W M Wheeler had observed the phenomenon in his laboratory and had written:

I have never seen a more astonishing exhibition of the limitations of instinct. For nearly two whole days these blind creatures, so dependent on the contact-odor sense of their antennae, kept palpating their uniformly smooth, odoriferous trail and the advancing bodies of the ants immediately preceding them, without perceiving that they were making no progress but only wasting their energies, till the spell was finally broken by some more venturesome members of the colony.

Moral of the story:
Don’t just follow the person in front; look around, check out what's doing, what choices you have, and don't be afraid . . . 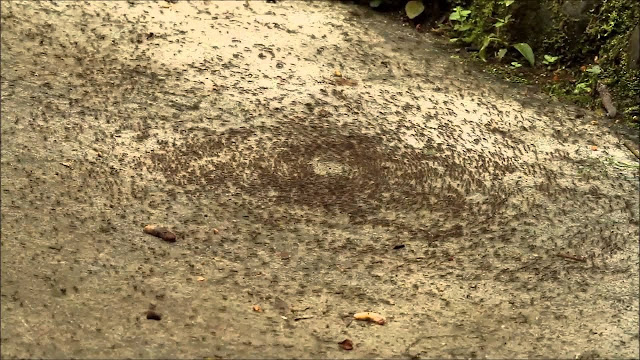