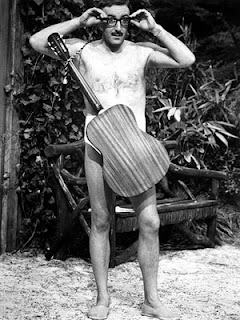 Steve, whose hero is Spike Milligan and who has been prolific with comments in the last few days (and don't get me wrong, I appreciate feedback), sent me a message in response to yesterday's item about The Goons.  He asked whether I had heard the story about Peter Sellers turning up on Spike's doorstep one morning and set out his recollection of it.  I confess that I had not heard this story before.
Some research established that the story is a true one and I quote it from a story about Claire Bloom, who was associated with the show:

"Peter and Spike were real characters," she recalled. "They always enjoyed playing tricks on one another. For example, one morning at 3 am Milligan, who lived opposite Sellers was roused from a deep sleep by a knock on his door. When he opened it he found Sellers standing there naked except for a Bowler hat, socks and shoes.
‘Good morning! Do you know a good tailor?’ Peter asked.
Milligan said he got his own back by sending him a telegram the next day saying, "Ignore first telegram."

A story I had heard some years back about Errol Flynn and Charles Laughton has been harder to verify.  It may or may not be true but it is consistent with both Charles Laughton's aloof manner and  Errol Flynn's mischievous nature and. shall we say,  reputation.

Charles Laughton was hosting a fancy dress party at his home in Hollywood in the 1940's.
When he answered the doorbell he found Errol on his doorstep, totally naked except for a large loaf of bread he had strapped to his front and another he had strapped to his back.  He had then poured tomato sauce over himself and was coming as a hot dog.
Laughton looked him up and down through his monocle and finally said:
"Errol, I don't know why you bothered.  You could have just slung it over your shoulder and come as a petrol bowser." 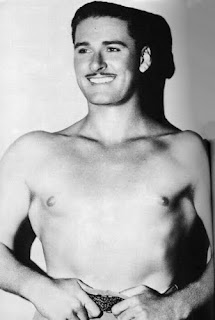 Posted by BytesMaster at 8:48 PM

Email ThisBlogThis!Share to TwitterShare to FacebookShare to Pinterest
Labels: Charles Laughton and Errol Flyn, The Goons