Whiskey In The Jar 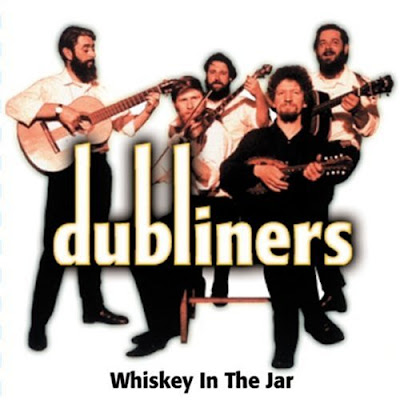 There’s nought better than a rollicking traditional Irish pub song, there’s nought better Irish pub song than Whiskey in the Jar, and there’s nought sings it better than the Dubliners. You can keep your versions by Metallica, Smokie and Thin Lizzy.
The story in the lyrics is of a highwayman (ie bushranger) in the Cork and Kerry mountains who is betrayed by either his wife or his lover.
After robbing Captain Farrell, a military or government man (“for he were a bold deceiver”), the narrator takes his booty home to his wife or sweetheart, Jenny. Whilst he is asleep, Jenny fills his pistols with water and betrays him to Captain Farrell. He is taken prisoner and presumably Jenny makes off with the money. The song ends on a slightly positive note with the narrator hoping that his brother in the army will assist him.
Sit back with your coffee for a few moments before starting the day's work, relax and let the music of Whiskey in the Jar set your foot tapping.  Click on the following links:

As I was a goin' over the far famed Kerry mountains
I met with Captain Farrell and his money he was counting
I first produced my pistol and I then produced my rapier
Saying "Stand and deliver" for he were a bold deceiver
Chorus:
Musha rig um du rum da,
Whack fol the daddy O,
Whack fol the daddy O,
There's whiskey in the jar.
I counted out his money and it made a pretty penny
I put it in me pocket and I took it home to Jenny
She sighed and she swore that she never would deceive me
But the devil take the women for they never can be easy
(Chorus)
I went up to my chamber, all for to take a slumber
I dreamt of gold and jewels and for sure 't was no wonder
But Jenny drew me chargers and she filled them up with water
Then sent for Captain Farrell to be ready for the slaughter
(Chorus)
'Twas early in the morning, just before I rose to travel
Up comes a band of footmen and likewise Captain Farrell
I first produced me pistols for she stole away me rapier
I couldn't shoot the water, so a prisoner I was taken
(Chorus)
Now there's some take delight in the carriages a rolling
And others take delight in the hurling and the bowling
But I take delight in the juice of the barley
And courting pretty fair maids in the morning bright and early
(Chorus)
If anyone can aid me 'tis my brother in the army
If I can find his station in Cork or in Killarney
And if he'll go with me, we'll go rovin' through Killkenny
And I'm sure he'll treat me better than my own a-sporting Jenny
(Chorus)

Trivia:
-  The Yanks adapted English and Irish songs to their own use, much as they take TV shows and movies from other countries today and change them to an American setting. Just look at what the Seppo’s did with our flicks Priscilla: Queen of the Desert and Paul Hogan/Michael Caton’s Strange Bedfellows. During colonial days they changed the lyrics of Whiskey in the Jar to one of their American lads being sentenced to death by hanging for robbing British officials. They were still changing the lyrics up to the 1850’s, with one version at that time called Whiskey in the Bar.
-  The original Irish version dates back to the 17th century.
-  Alan Lomax, in his book “The Folk Songs of North America”, states:

"The folk of seventeenth century Britain liked and admired their local highwaymen; and in Ireland (or Scotland) where the gentlemen of the roads robbed English landlords, they were regarded as national patriots. Such feelings inspired this rollicking ballad."

-  It is also thought that the story is based on the execution of an Irish highwayman, Patrick Fleming, in 1650.
-  The song has been widely sung since the 1950’s but it was The Dubliners’ recording in the 1960’s (and a number of times since) that gained it world exposure. Thin Lizzy recorded it in the 1970’s and Metallica did a cover in 1998, videos available on YouTube. There are also versions by the Pogues, U2 and Smokie.
-  The words in the chorus - Musha rig um du rum da, Whack fol the daddy O,- have no meaning. They are just made up nonsense words.
-  “There’s whiskey in the jar” means having a supply when needed, much like the robbery being his retirement fund.
Posted by BytesMaster at 9:19 PM

Email ThisBlogThis!Share to TwitterShare to FacebookShare to Pinterest
Labels: Whiskey In The Jar