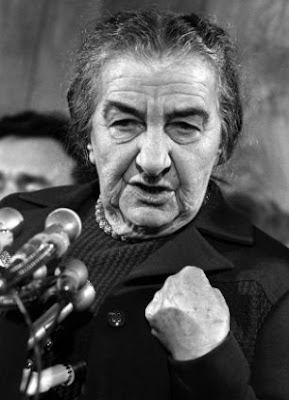 “Let me tell you the one thing I have against Moses. He took us forty years into the desert in order to bring us to the one place in the Middle East that has no oil!”

Following on from Funny Friday’s Jewish humour, today’s item is a quote by Golda Meir (1898-1978), the fourth Prime Minister of Israel (1969-1974) and the first female to hold that office, being called out of retirement at age 70 to become Israel's new PM.

Tall, austere and with her life’s hardships reflected in her face, her formidable appearance was matched by an equivalent personality that was honest, straightforward and single minded.

Rigidly nationalistic, she was described as the “Iron Lady” of Israeli politics long before that term came to be applied to Britain’s Margaret Thatcher. Former Israeli Prime Minister David Ben Gurion referred to her as “the best man in the government”.

In 1972, outraged at the lack of public action in respect of the murder of Israeli athletes at the Munich Olympics, she ordered the Mossad to hunt down and assassinate suspected leaders of Black September and the Popular Front for the Liberation of Palestine.

Some other Golda Meir quotes:

“Don't be so humble - you are not that great.”
- To Israel’s Defence Minister, Moshe Dayan

“One cannot and must not try to erase the past merely because it does not fit the present.”

“Trust yourself. Create the kind of self that you will be happy to live with all your life. Make the most of yourself by fanning the tiny, inner sparks of possibility into flames of achievement.”

“It isn't really important to decide when you are very young just exactly what you want to become when you grow up. It is much more important to decide on the way you want to live. If you are going to be honest with yourself and honest with your friends, if you are going to get involved in causes which are good for others, not only for yourselves, then it seems to me that that is sufficient, and maybe what you will be is only a matter of chance.”

“A story once went the rounds of Israel to the effect that Ben-Gurion described me as 'the only man' in his cabinet. What amused me about is that he (or whoever invented the story) thought that this was the greatest compliment that could be paid to a woman. I very much doubt that any man would have been flattered if I had said about him that he was the only woman in the government!” 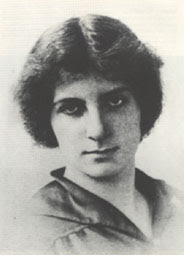 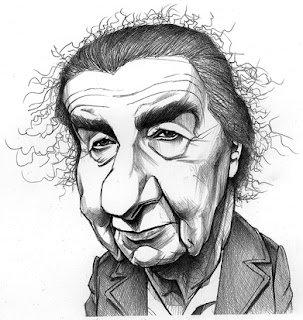