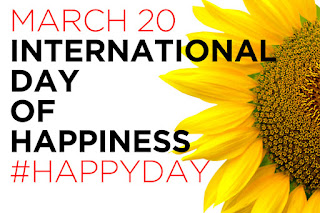 Today, 20 March, is the International Day of Happiness.

The day was established by the United Nations General Assembly on 28 June 2012, the resolution stating that “the pursuit of happiness is a fundamental human goal”.

Abraham Lincoln had his own spin on happiness: “Most folks are about as happy as they make up their minds to be.”

I was originally going to post some thoughts on happiness from various well known people but something happened in my office yesterday that I want to tell you about instead.

I spent most of the day with a client, who is also a friend, assisting with his court matter and documents.

This person has experienced a lot of grief and sadness in his life, including events that no parent should ever have to endure. His eyes show the pain that he has gone through, is still going through, the lines on his face show the toll that he has paid.

At today’s conference the issue of the stresses that he is under came up. He paused and recited to myself and to Lisa, a final year law student working in my office:

The clock of life is wound but once,
And no man has the power
To tell just when the hands will stop
At late or early hour.

The present only is our own,
So live, love, toil with a will,
Place no faith in "Tomorrow,"
For the Clock may then be still.”

I looked it up later. It is a poem called The Clock of Life and it is by Robert H Smith.

It seems like pretty good advice for this International Happiness Day, 2015.