Name origin:
The word “allawah” means “live here” or “stay here” in aboriginal. Given the history of relations with indigenous Australians from colonial days to the present, I would say that it is unlikely that such word and meaning was ever directed to whites.

Further comments:
Part of a land grant made to Captain John Townson in 1808.
Received its own railway station in 1925 which stimulated a house-building boom. 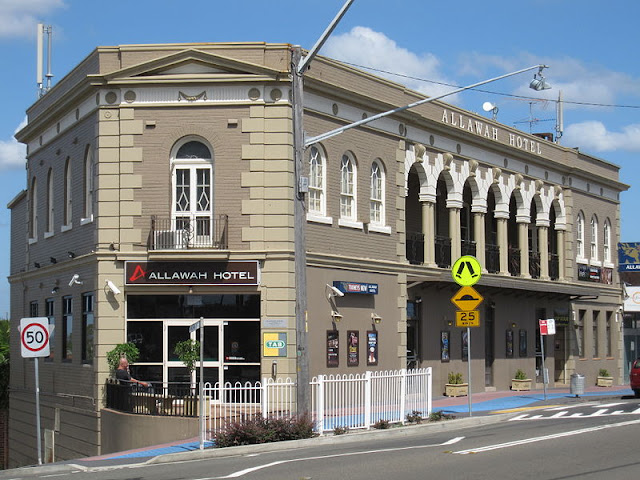 Name origin:
Ambarvale is a suburb or recent origin. Established in 1973, the name of the suburb comes from the name of the property owned by ex-convict Samuel Larken, the land acquisition taking place in 1816. He had been sentenced to transportation for life in 1800 for stealing a watch and some silver spoons. Within a short time of his arrival he received a pardon and became a clerk to Governor King and later to Governors Bligh and Macquarie. Larken married Elizabeth, the daughter of John Wild, who owned the property adjoining Ambarvale. The two properties later became the site of the suburb of St Helen’s Park.

Further comments:
The suburb was developed as a project by Lend Lease, which named the streets after Charles Dicken’s characters. Dickens Road recognises the novelist himself, while Copperfield Drive acknowledges David Copperfield. There are also Barnaby Place, after the novel Barnaby Rudge, Boythorn and Jarndyce Bleak House, and Miss Havisham, Estella, Jaggers, and Joe Gargery from Great Expectations. Nickelby Way comes from Nicholas Nickelby, as does Lillyvicks Crescent, Squeers Place, Cheeryble Place, and Mantalini Street. Lend Lease didn’t go with Dickens character names, such as Mr Snawley, Sir Tumley Sniffim and Uncle Pumblechook.
---------------
A major attraction to many early home buyers was a large 'ornamental lake', created to disguise a shale quarry. Criticised as being more of a 'drowning pool' for children, it was filled and turned into Fieldhouse Park , named after an early family. 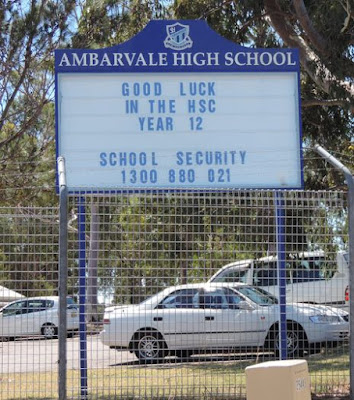 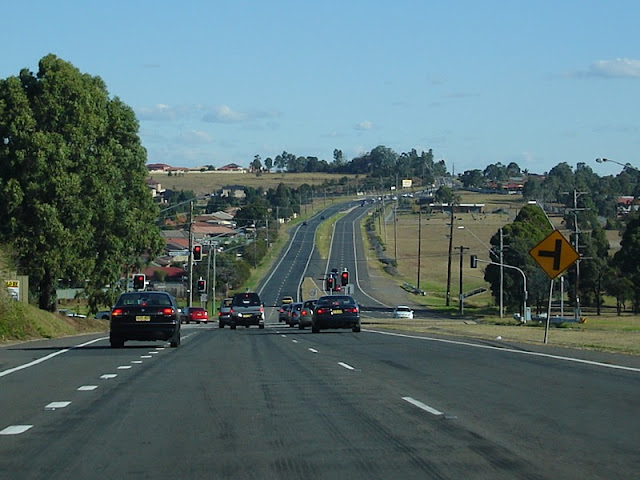 Name origin:
Major George Johnston (1764-1823) captained one of the First Fleet ships. He was granted 100 acres (0.40 km2) of land in the area around Annandale and Stanmore, which became known as Johnston's Bush. He later renamed it Annandale after his birthplace Annan in Scotland. His name is remembered in Johnston Street, Johnston Lane, Johnstons Creek and Johnstons Bay. 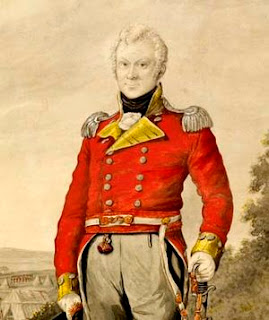 Further comments:
Johnston is the stuff of which a movie should be made.

He went to America with his regiment, and took part in the 1775 Battle of Bunker Hill, an early part of the Revolutionary War. He of course was on the side of the Brits and he distinguished himself by seizing the colours and carrying them into action after the standard-bearer had been mortally wounded. During the fight, his father received a chest wound, from which he subsequently died. The Duke of Northumberland, who had held Johnston's father in high regard, became Johnston's guardian, and throughout his life the nobleman retained a keen personal interest in his fortunes.

He subsequently served aboard HMS Sultan in the East Indies in 1781, suffering a severe wound in action against the French. Returned to garrison duty in Portsmouth, he volunteered to join the New South Wales Marine Corps, which would accompany the First Fleet to New South Wales. He sailed for Australia aboard the convict transport Lady Penrhyn in 1788.

On arrival in the colony Johnston served as adjutant to Governor Arthur Phillip, and was promoted in 1789 to the rank of Captain-Lieutenant of Marines. He transferred from the New South Wales Marine Corps to the locally-raised New South Wales Corps in 1791 with the rank of captain.

In 1804 he led a military force that broke up the rebellion of Irish convicts at Castle Hill, attacking several hundred armed convicts with a small force.

He also arrested Governor Bligh at Government House during the Rum Rebellion in 1808. Sent to England where he was tried for mutiny, he received a very light punishment and returned a private citizen.
---------------
Johnston had 7 children by Elizabeth Abrahams, one of the convicts aboard Johnston’s First Fleet ships. They built Annandale House on his land grant and farmed the property. He married her in 1814.
---------------
George's son Robert inherited his estate and in 1877 sold it to John Young, who was a businessman, architect and mayor. Young began turning the Johnston estate into an attractive suburb by building a number of picturesque houses. One of those houses was Kenilworth, with a "witch's cap" style of roof common to that period of architecture, which Young rented to Henry Parkes, father of Federation and former Premier of NSW. Other houses in the group wereThe Abbey, Oybin, Rozelle (now demolished), Greba, Hockingdon, Highroyd and Claremont (now demolished). Some of the houses are popularly known as "witches houses" because their towers resemble witches' hats. Of the various houses in this group, The Abbey is the most notable. Of the various houses in this group, Built by John Young, The Abbey has been described as a stone Gothic Revival mansion, modelled on Scottish manors. Young gave his imagination a free rein and the house incorporates gables, arches, gargoyles, lions, quatrefoils, chimneys, turrets, a cloister and a tower with copper cladding (it was rumoured that Young may have stolen gargoyles from St Mary's Cathedral, which he built, but there was no proof). Young was the highest ranking Mason in Australia and The Abbey incorporates Masonic themes. It is possible that the building may have been used by Young as a Masonic Lodge. 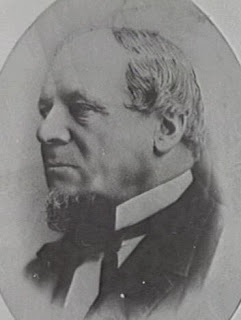 John Young
---------------
American author, Mark Twain, stayed in Johnston Street, in the home of Sir Henry Parkes toward the end of Parkes' life 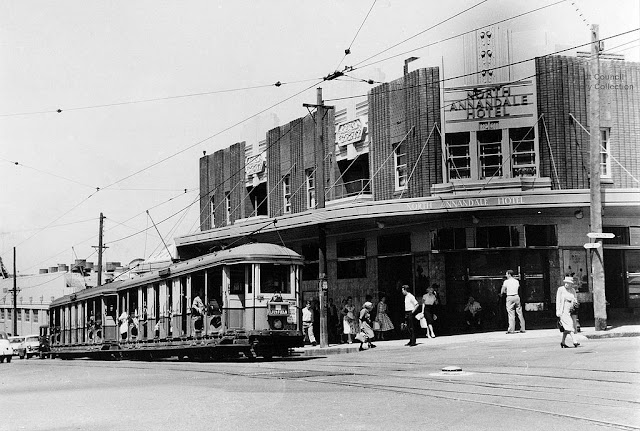 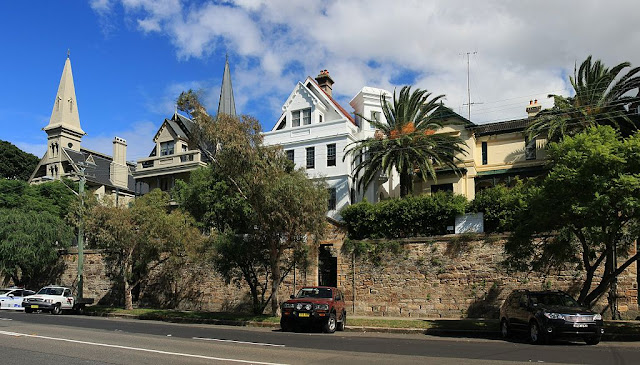 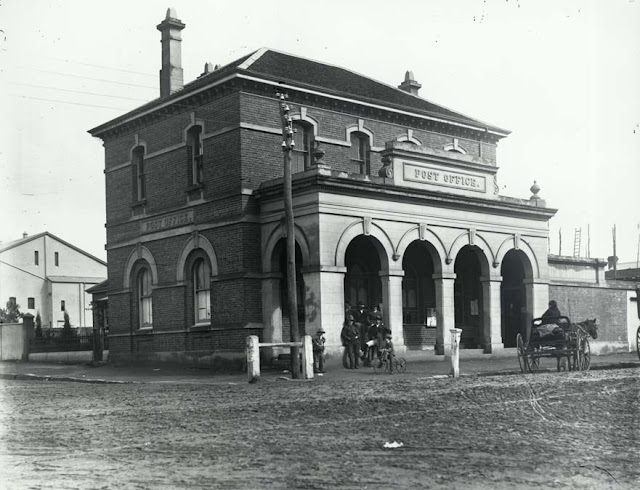 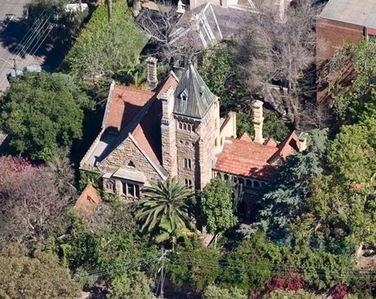 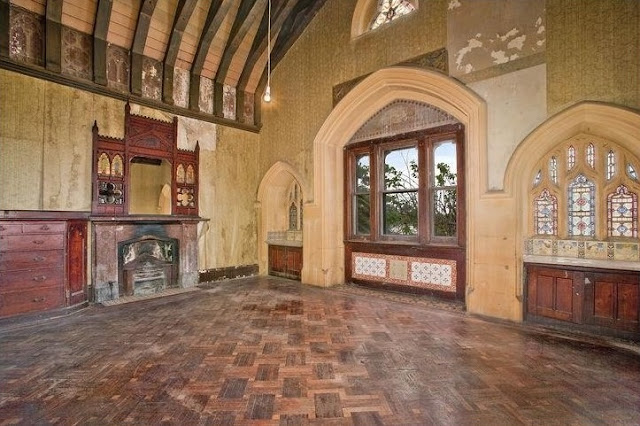 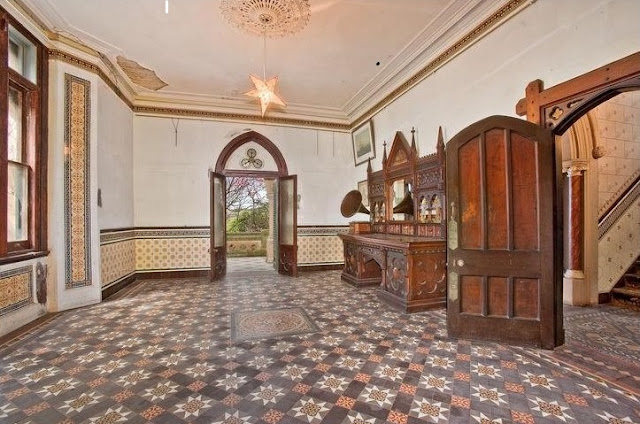 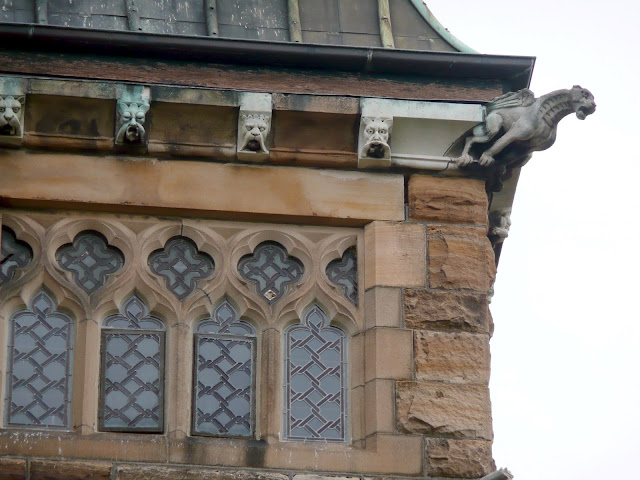 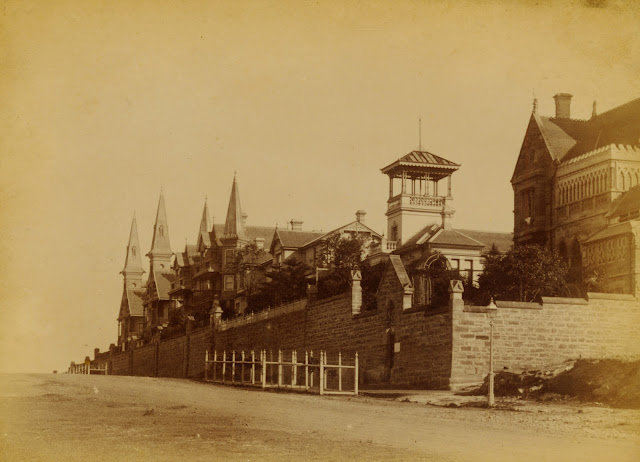 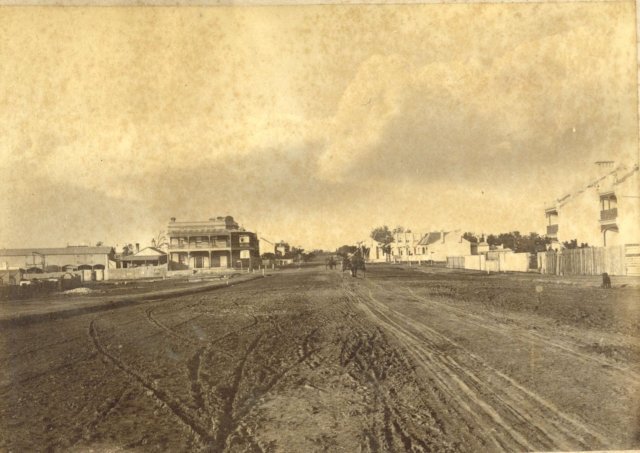 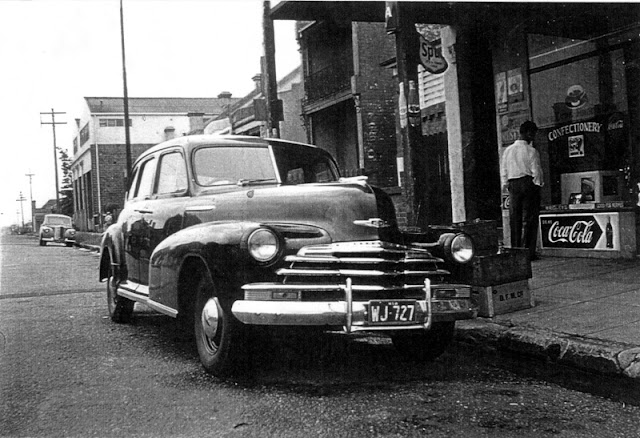 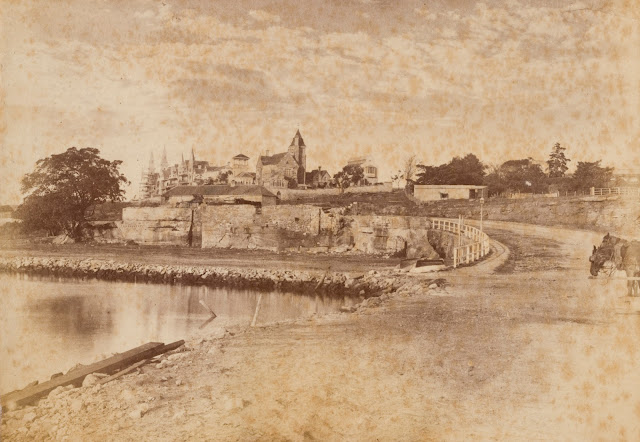 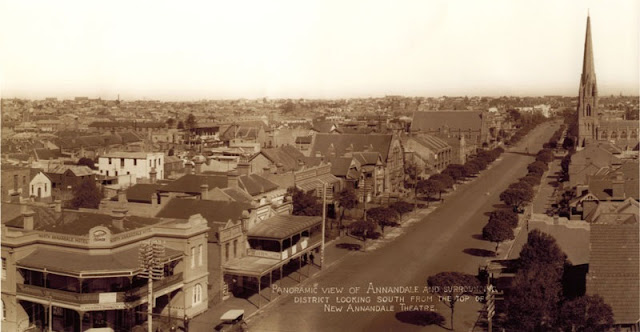 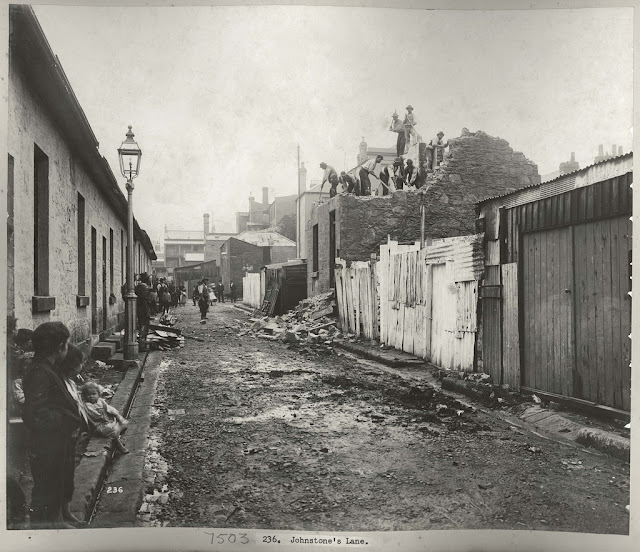 Johnston’s Lane
From a series of images showing the areas in Sydney affected by the outbreak of Bubonic Plague in 1900. Taken by Mr. John Degotardi, Jr., photographer from the Department of Public Works, the images depict the state of the houses and 'slum' buildings at the time of the outbreak and the cleansing and disinfecting operations which followed. 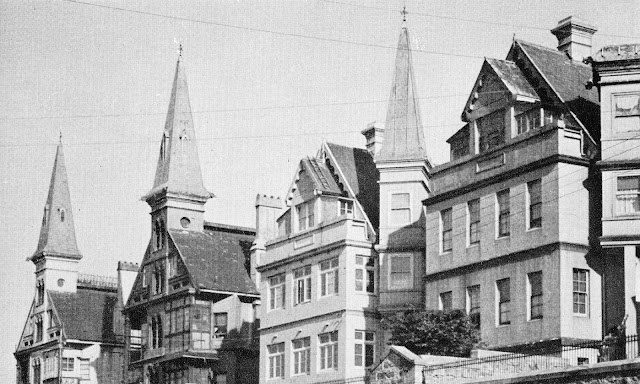 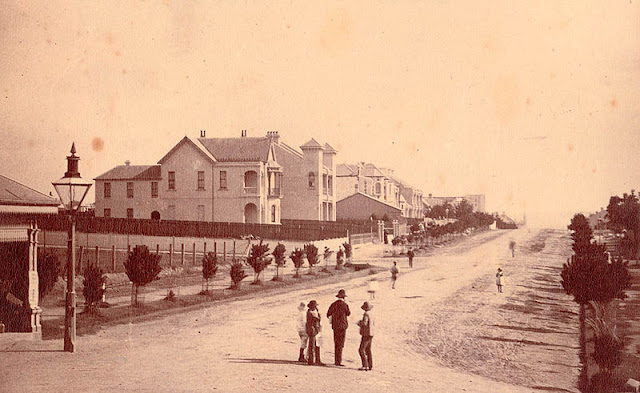 Posted by BytesMaster at 1:05 AM