Commencing a look at some of the events of 50 years ago. 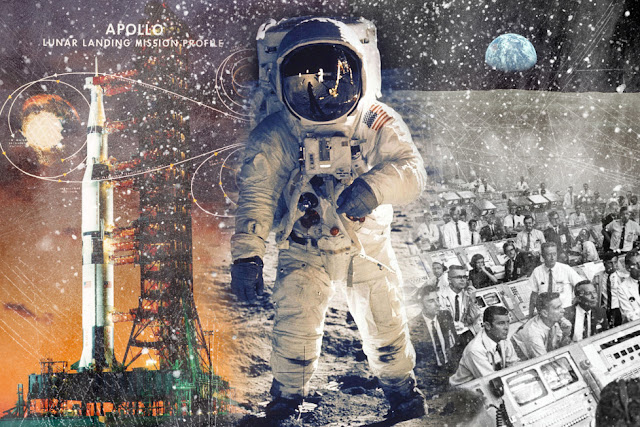 Neil Armstrong's "one small step for man" wasn't small at all. He had to drop about 3 1/2 feet (1.07m) from the foot of the Eagle's ladder to the surface.

-----oOo-----
They could have been locked out. When lunar module pilot Buzz Aldrin joined Armstrong on the moon's surface, he had to make sure not to fully close the Eagle's hatch because the cabin would start repressurising, making it difficult to re-enter.

Between 1969 and 1972, astronauts left behind more than footprints—mostly things to help save weight for takeoff. Things like rovers and descent and ascent stages, astronaut boots and a gold replica of an olive branch.

Pink Floyd jammed the tune "Moonhead" during the BBC's live television coverage of the moon landing.

BTW:
The BBC used David Bowie’s then current hit “Space Oddity” to soundtrack their Apollo coverage,, notwithstanding the lyrics.  According to Bowie:
“I’m sure they really weren’t listening to the lyrics at all. It wasn’t a pleasant thing to juxtapose against a moon landing…. Obviously, some BBC official said, ‘Oh, right then, that space song, Major Tom, blah blah blah, that’ll be great.’ ‘Um, but he gets stranded in space, sir.’ Nobody had the heart to tell the producer that.”

The American flag planted on the moon by the Apollo 11 crew was likely purchased at a Houston Sears store by a NASA secretary.

This anniversary year, six teams of scientists will begin to examine one of three caches of lunar regolith from Apollo missions that have been stored at NASA's Johnson Space Center since 1972.

The Apollo Guidance Computer weighs 70 pounds yet was less powerful than today's smartphones.

In 2015, University of Oxford physicist David Robert Grimes, Ph.D., developed a mathematical model determining that if the U.S. moon landings were faked by the government, an estimated 411,000 people would have been in on the hoax and at least one person would have leaked the conspiracy within 3 years and 8 months.

The first supper on the moon was the Last Supper. Shortly before stepping on the moon, Buzz Aldrin took the rite of Christian communion, consuming the sacraments of wine and bread that he brought on board.

Eagle Scout Neil Armstrong earned 26 merit badges (21 are required) but not the Space Exploration merit badge. It wasn't created until 1965.

While many believe Armstrong said "one small step for man," Armstrong later said that he in fact did include "a man" in the quote but the audio cut out. It's become a source of investigation for decades.

If the Saturn V rocket had exploded, it would have created a fireball in excess of 2,500 degrees Fahrenheit.

Upon returning to Earth, Apollo 11 astronauts were quarantined for two weeks in case they had been contaminated with dangerous pathogens.

President Richard Nixon's speechwriter drafted a just-in-case address, July 18, 1969. "IN EVENT OF MOON DISASTER: Fate has ordained that the men who went to the moon to explore in peace will stay on the moon to rest in peace. These brave men, Neil Armstrong and Edwin Aldrin, know that there is no hope for their recovery. But they also know that there is hope for mankind in their sacrifice..."

The mission was so dangerous, the astronauts couldn't get life insurance. So they each autographed hundreds of philatelic "covers," envelopes their friends had postmarked on July 20, 1969, which they knew their families could sell to collectors to fund their kids' college education if they did not return.

Aldrin threw a Buzz uppercut. In 2002, the former astronaut punched a documentary maker who poked him with a Bible and demanded he swear the moon landing wasn't staged.

And some more, from news.com at:
https://www.news.com.au/technology/science/space/moon-landing-quiz-and-bizarre-facts-about-apollo-11/news-story/f3c4ce634dce3610c23ca40b2bcbfa6c

Armstrong, Aldrin and Collins didn’t even have the luxury of a loo onboard the Apollo 11 spacecraft as they were propelled towards orbit from Florida in front of one million spectators.   During their eight days in Space, the trio had to pee into a ‘roll-on cuff’ — a rubber tube that resembled a condom and was hooked up to a ‘receiver’ tube and a collection bag. They had to change the cuff every day.  And the process for defecating was even more disgusting.

Astronauts on Apollo missions relied on an “extremely basic system” which involved taping a plastic bag to their buttocks to capture their faeces, a NASA report states. After going to the toilet, they then had to seal up the bag, knead it, roll it into the “smallest possible volume” and store it so they could bring it back to Earth.  The astronauts couldn’t use the same system when they were on the Moon itself, so they wore an absorbent pair of undershorts instead — essentially, a nappy.

Armstrong made a promise to his concerned gran before the Apollo 11 mission.  Elderly Caroline Korspeter told TV crews that her grandson had assured her he wouldn’t step out of the spacecraft on to the Moon if it looked dangerous.  The 82-year-old said of the journey: “I think it’s dangerous. I told Neil to look around and not to step out if it didn’t look good. He said he wouldn’t.”

In the end, Armstrong didn’t have to heed his gran’s warning.  He stepped on to the lunar surface, remarking: “That’s one small step for man, one giant leap for mankind,” before returning safely to Earth days later.

Armstrong and Aldrin left a range of items on the Moon before heading back to our planet.  These included a tiny silicon disk, about the size of a 50-cent piece, containing messages of peace from 73 leaders across the world — including the Queen.  Her Majesty’s message read: “On behalf of the British people I salute the skill and courage which have brought man to the Moon. May this endeavour increase the knowledge and wellbeing of mankind.”

Other souvenirs left behind on the lunar surface included the American flag, a small replica of an olive branch, and a plaque proclaiming “Here men from the planet Earth first set foot upon the Moon. July 1969, A.D. We came in peace for all mankind.”

The story that Neil Armstrong cryptically uttered "Good luck, Mr. Gorsky" as he first stepped onto the moon is false, according to authoritative myth debunking site snopes.com

When Apollo Mission Astronaut Neil Armstrong first walked on the moon, he not only gave his famous “One small step for man; one giant leap for mankind” statement, but followed it by several remarks, including the usual COM traffic between him, the other astronauts, and Mission Control. Before he re-entered the lander, he made the enigmatic remark “Good luck, Mr. Gorsky.”Many people at NASA thought it was a casual remark concerning some rival Soviet Cosmonaut. However, upon checking, [they found] there was no Gorsky in either the Russian or American space programs.

Over the years, many people have questioned him as to what the “Good luck, Mr. Gorsky” statement meant. On July 5, in Tampa Bay, FL, while answering questions following a speech, a reporter brought up the 26- year-old question to Armstrong. He finally responded. It seems that Mr. Gorsky had died and so Armstrong felt he could answer the question. When he was a kid, Neil was playing baseball with his brother in the backyard. His brother hit a fly ball which landed in front of his neighbors’ bedroom window. The neighbors were Mr. and Mrs. Gorsky. As he leaned down to pick up the ball, he heard Mrs. Gorsky shouting at Mr. Gorsky, “Oral sex? Oral sex you want? You’ll get oral sex when the kid next door walks on the moon!”

Snopes.com says that the alleged statement does not appear in NASA transcripts and that Armstrong himself said in late 1995 that he first heard the anecdote delivered as a joke by comedian Buddy Hackett in California.

Nonetheless when the space shuttle Columbia crew completed a repair mission on the Hubble Space Telescope in March 2002, chief repairman John Grunsfeld called out (in homage to this legend) “Good luck, Mr. Hubble” as the telescope drifted off. 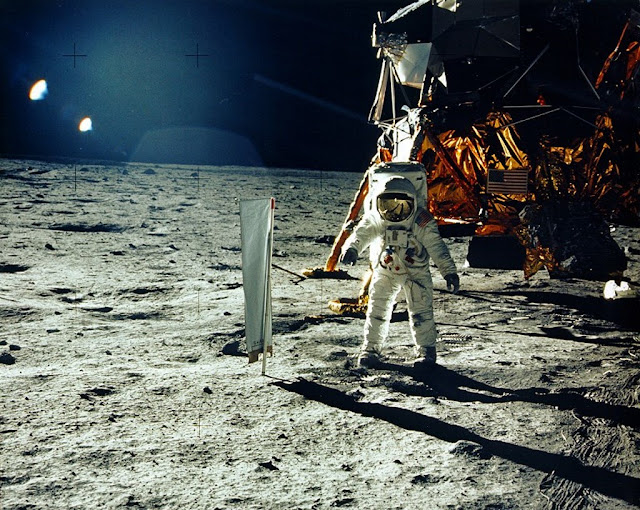 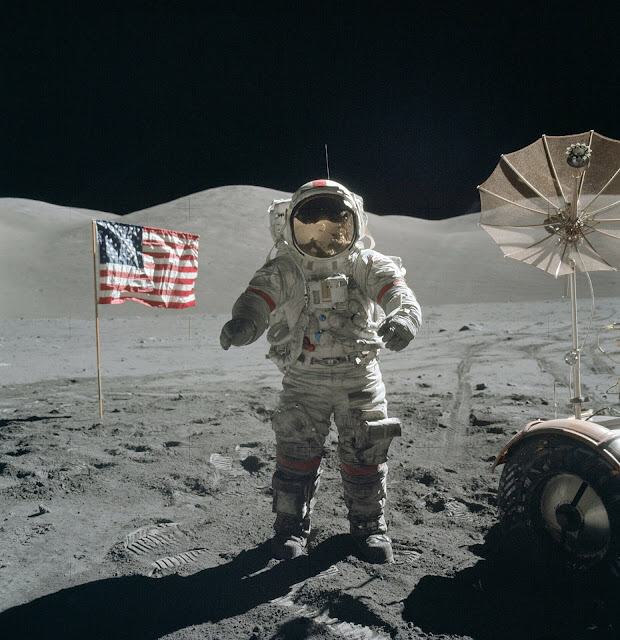 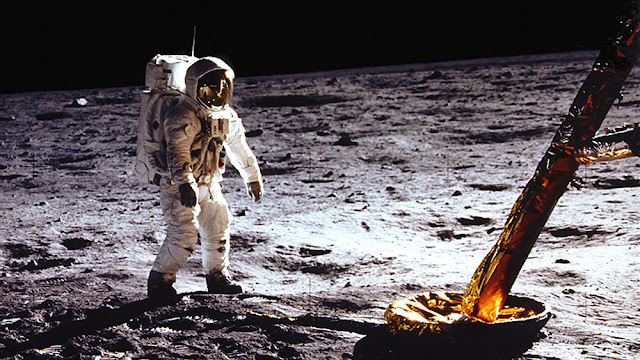 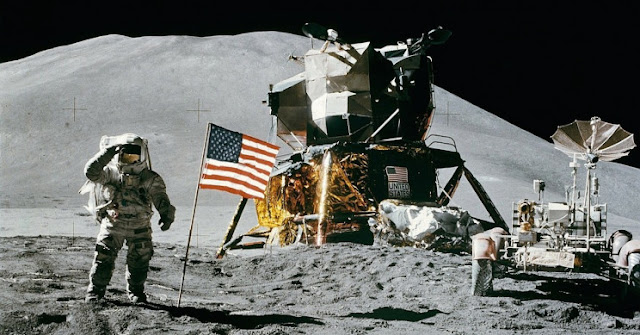 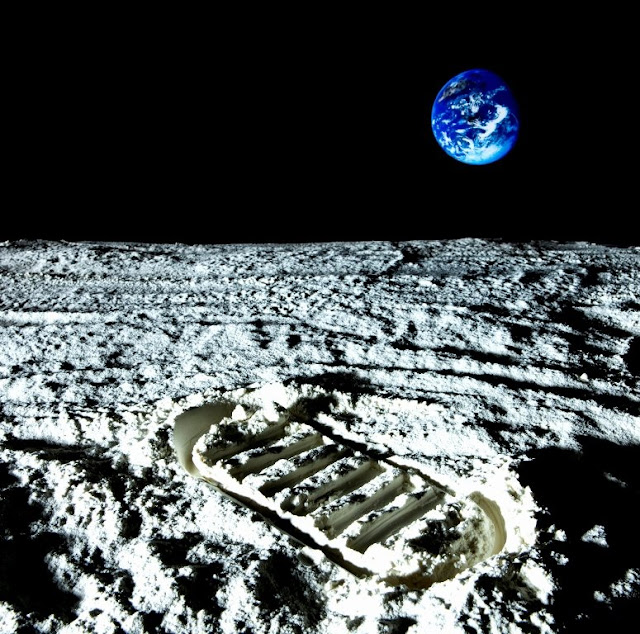