Byter and personal friend Wayne B sent me an email about the post with pics of abandoned Irish, Scottish and English cottages and buildings: “Wonderful images of the past -what stories could each building tell.”

It reminded that 5 years ago – June 14, 2014 – I had posted about one such Irish cottage resident, Dan O’Hara, the subject of a song by Finbar Furey. I had been privileged to hear him sing it in person when Kate and I attended his performance with Byer Steve M and wife Diane. A wonderful singer and musician and a kind, warm man.

A couple of years ago I was privileged to see and hear Finbar Furey perform. He is an amazing singer and musician who is now pursuing a solo career after being part of the Irish folk band The Fureys.

One of the songs sung by Finbar was Dan O’Hara, a sad song about the adversities suffered by the farmer Dan O’Hara. Was he a real person? Was he as unfortunate as the lyrics say, being visited by misfortunes that would likely have broken a lesser man?

Although his is the best imho, here are a couple of performances by alternative performers: 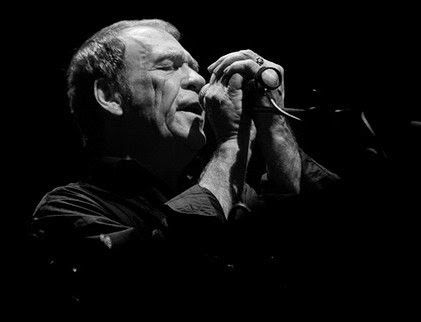 For those who like Finbar Furey as much as I do, here are some other numbers by him:

When You Were Sweet Sixteen
https://www.youtube.com/watch?v=Ghwql3koHmM

Cushla gra mo craoi*
won't you buy a box from me
And have the prayers of Dan from Connemara.
Sure I'll sell them cheap and low
buy a box before you go
from the broken-hearted farmer Dan O'Hara.

Cushla gra mo craoi
won't you buy a box from me
and have the prayers of Dan from Connemara.
Sure I'll sell them cheap and low
buy a box before you go
from the broken-hearted farmer Dan O'Hara.

Cushla gra mo craoi
won't you buy a box from me
and have the prayers of Dan from Connemara.
Sure I'll sell them cheap and low
buy a box before you go
from the broken-hearted farmer Dan O'Hara.
3x

The Dan O’Hara of the Irish folk song was indeed a real person and his misfortunes were equally real. His story is not unique, it is illustrative and reflective of the history adversities, sadnesses and injustices of Ireland in the 19th century.

Dan O’Hara had a successful farm, rented in Connemara, where he lived with hsi wife and 8 children. When he increased the size of the windows in the cottage, his landlord increased the rent to a level that he could no longer afford to pay. Evicted from the farm, he emigrated to New York but his wife and three of his children died during the passage. A sad and broken man, he was reduced to selling matches on street corners.

Here is a lengthy, but fascinating, history from a website The Wild Geese:The History of the Irish Worldwide. The post on that website is called Dan O’Hara: The man Behind the Song and it was written by the delightfully named Gearoid O’Domhnaill. It is at:
http://thenewwildgeese.com/profiles/blogs/dan-o-hara-the-man-behind-the-song

I had occasion to visit Dan O’Hara’s hillside farm in Connemara recently as part of my work as a tour guide, work that takes me all over the country. The owner Martin Walsh, a natural born storyteller captivated the group with the story of how the unfortunate farmer ended up in New York and sang the sad song which told of his misfortune.The name O’Hara itself comes from the Irish Ó hEaghra, Eaghra being a Sligo chieftain who died in 926. By the standards of the area he would have been regarded as something of a prosperous farmer who farmed eight acres around his average sized cottage. The potato was the main source of food and an acre and a half of potatoes would feed five or six people for six months. At the time nobody owned the land on which they farmed and the tenants could be evicted on a whim or if the landlord suddenly decided the land would more profitably be used for grazing. The landlord tenant relationship was very different to that of in England. Firstly the landlord did not usually live in Ireland; indeed many rarely if ever visited their Irish estate and seldom had any idea was what going on there. Secondly the landlords viewed their tenants as a conquered people to be exploited. They preferred to let local land agents, known as ‘land sharks’ take care of their estates and send the rent to England. The tenants lived in fear of these agents.

Though the cottage is half way up a mountain it was a focal point in the area for several céilis and many men found their future wife at his home. The area is today sparsely populated but in the 1840s it would have considerably more densely populated. Not only would the Famine decimate the population of Connemara but it also affected the Irish speaking culture. His fatal mistake was to improve his cottage by installing larger windows around 1845. Home improvements were frowned upon by landlords and agents. Doors and windows could not exceed a certain height and dimension without the notorious window tax coming into force. It is from this tax that the phrase ‘daylight robbery’, a tax on natural daylight, stems. The already high rent was increased and O’Hara failed to make the payment at ‘gale day’. Tenants would not have had any right of appeal and could expect no mercy. The end came when the landlord’s agent arrived with the bailiffs, a battering ram and the heavily armed RIC. The thatch was set alight, the walls pushed in and the family left without a home. Evicted tenants would then usually set up a make shift shelter in a ditch or a bog hole and live like animals. Very often however they would be expelled from the area and friends and neighbours would be forbidden from taking them in.

America offered the only chance of survival. His friends and neighbours would surely have keened the departure of the O’Hara family with an American Wake, sadly accepting the fact that they would never see Dan O’Hara in Connemara again. It was the fate shared by thousands at the time. It is not known which ship the O’Hara family left on. More than likely he would have left through Clifden or Galway. The ships which sailed the Atlantic became known as ’coffin ships’ and conditions on board were appalling. Passengers were not screened prior to boarding and many came on board with typhus. A typical journey could be anywhere from forty days to three months, depending on the wind and the skill of the captain. It was assumed that the passengers would bring their own food and the ships were only required to provide 7 pounds of food per week per passenger. Many passengers were starving when they started the journey and they depended on this meagre ration which was often poorly cooked presenting further health problems. The sick and dying lay in their own filth with no doctor on board to tend to them or priest to give the last rites. Not only was the food a problem but the water supply often became contaminated which led to dysentery. Some ships even ran out of water which increased the torment of those already suffering. Of the 100,000 Irish that sailed to North America in 1847, one in five died from disease and malnutrition. Only the strongest would survive and Dan O’Hara’s wife and three of his children did not survive the voyage.

Dan O’Hara arrived in New York a sad and broken man. In mid 19th century America no group in America was considered lower than the Irish and many, including Dan O’Hara, would have spoken little or no English which is why even today so much of New York slang has Irish roots. Conditions for the newly arrived emigrants were little better than in famine Ireland. Most of the Irish would have lived in a shanty, from the Irish sean tí, which were a common feature in urban areas. At the time 80% of all infants born to Irish immigrants in New York City died. Dan O’Hara was forced to put his remaining children into an orphanage. As the song proclaims he sold matches though his Irish accent would have been scorned by the Nativists, the white Anglo Saxon Protestants who formed the ruling elite of America. He ended his days in destitution and never got to live the American Dream.

Dan O’Hara would have long faded into obscurity were it not for singers such as Delia Murphy (1902-71) from Clare Morris who wrote the song and set it to music in 1951 at a time when such songs were not popular. She learnt many of her songs from the travellers who camped on her father’s land. Finbar Furey also adopted the song into his repertoire making sure the unfortunate farmer would not be forgotten.

The cottage where Dan O’Hara once lived was restored in 1992 where it now forms part of the Connemara Heritage Centre at Lettershea on the N59 on the Galway side of Clifden. 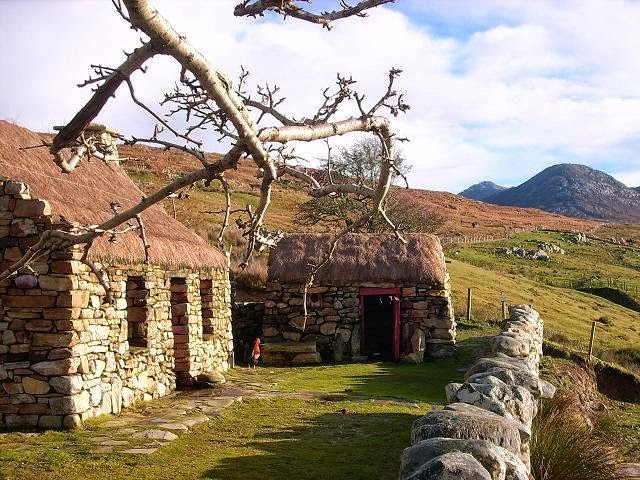 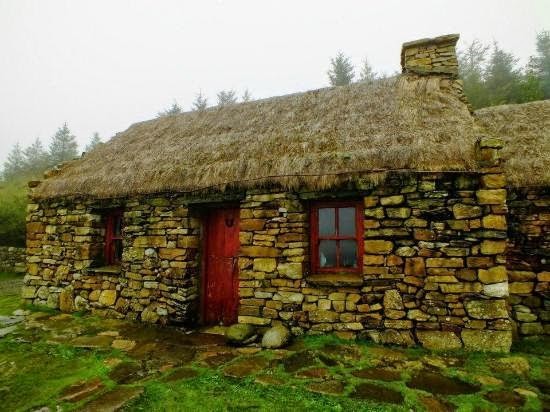 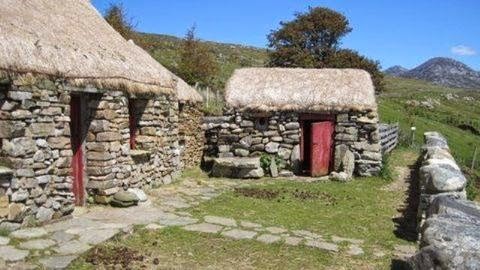 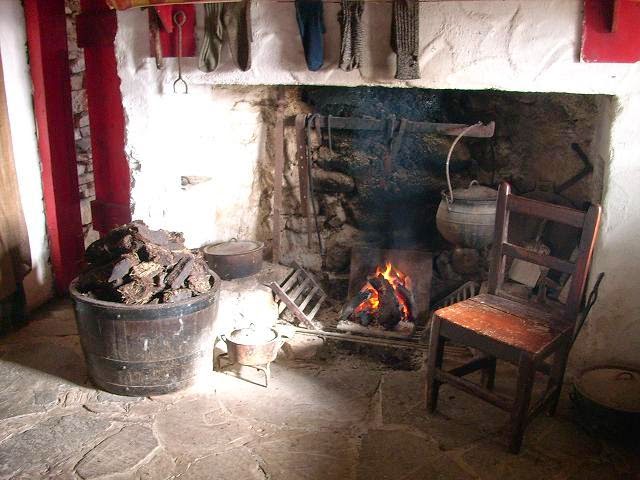 Here is a video with some views of the house, the area and an appearance by the owner of the site who is also the founder of the Connemara Heritage and History Centre.  It's worth a look:
https://www.youtube.com/watch?v=e-4Y9LgiQAg