You may want to use this one day in an appropriate post.
Sandy 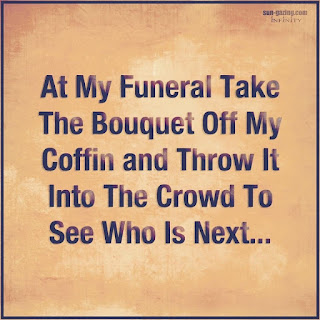 Hi Otto, I just had to share this-enjoy!
Regards, Tobye 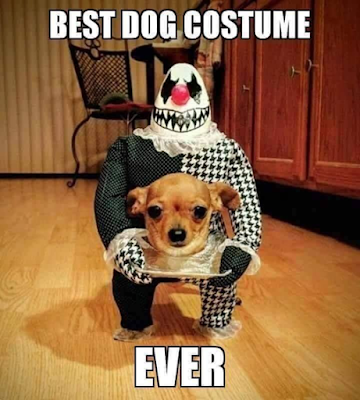 A contribution from Graham E:

Found this and thought of you……

"The Chaos" is a poem demonstrating the irregularity of English spelling and pronunciation.
Written by Dutch writer, traveller, and teacher Gerard Nolst Trenité (1870–1946), it includes about 800 examples of irregular spelling.

The first version of 146 lines of text appeared in an appendix to the author's 1920 textbook Drop Your Foreign Accent: engelsche uitspraakoefeningen, but "the most complete and authoritative version ever likely to emerge", published by the Spelling Society in 1993–94, has 274 lines.

I will teach you in my verse
Sounds like corpse, corps, horse and worse.
It will keep you, Susy, busy,
Make your head with heat grow dizzy;

Tear in eye your dress you'll tear.
So shall I! Oh, hear my prayer,
Pray, console your loving poet,
Make my coat look new, dear, sew it?

Just compare heart, beard and heard,
Dies and diet, lord and word,
Sword and sward, retain and Britain,
(Mind the latter, how it's written!)

Made has not the sound of bade,
Say—said, pay—paid, laid, but plaid.
Now I surely will not plague you
With such words as vague and ague,

But be careful how you speak,
Say break, steak, but bleak and streak,
Previous, precious; fuchsia, via;
Pipe, snipe, recipe and choir,

Here is a link to the full text
https://en.wikisource.org/wiki/Ruize-rijmen/De_Chaos

Another contribution by Graham, in response to the Colonel sanders/KFC post . . .

You forgot to mention the day when Colonel Sanders went to Harrys Café de Wheels…..

(For the benefit of overseas readers, I wrote about Harry’s Café de Wheels on August 31, 2013, here is the link:
http://bytesdaily.blogspot.com/search?q=harry%27s+cafe
Harry’s is the iconic moveable food caravan that was started by Harry Edwards at the entrance of the naval yard at Woolloomoolo in 1938. Because it was moveable it bypassed planning approval.) 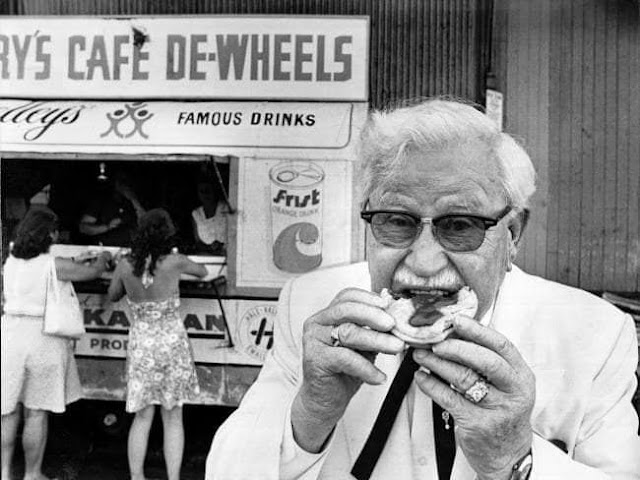 In the 1970’s, chicken king, Colonel Sanders, stopped at Harry’s and enjoyed the food so much that he ate three ‘pies and peas’ while leaning on his walking stick in front of the caravan. 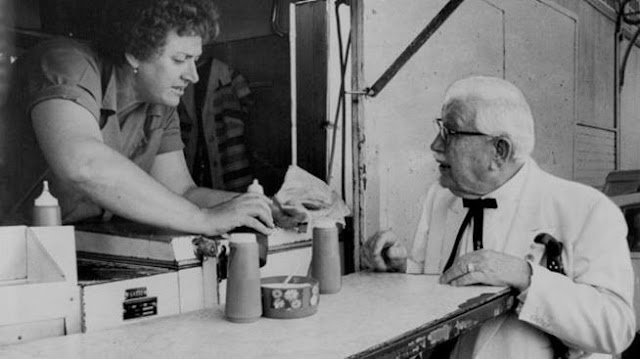 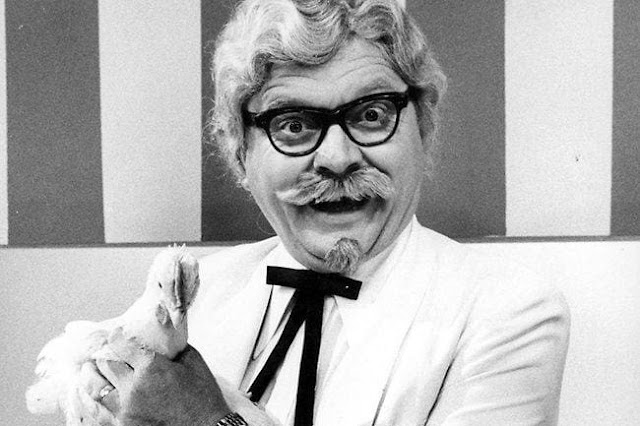 Bert Newton also did a series of commercials on Graham Kennedy’s Tonight Show dressed as a Southern Colonel for KFC in the late 1970’s.

Fun fact: After his gas station chicken became fast food he stopped in to a KFC and tried it.... He hated the extra crispy chicken, saying it was just a fried dough ball and said the gravy wasn’t fit for consumption by humans. He hated what his creation became.

While reading an article about crimes (and crime novels) in Kuala Lumpur, I saw this paragraph:

Australian writer Peter Carey meticulously recreates a KL just before the skyscrapers and shopping malls shot up in the boom years. My Life as a Fake(2003) features the strange and forgotten Australian poet Christopher Chubb who hides away in the back streets of KL after staging a great literary hoax back in his home country. Carey bases the hoax on the real Ern Malley hoax of 1943, in which two poets created a fictitious poet, Ern Malley, and submitted poems in his name to the literary magazine Angry Penguins. The strength of the novel is the intimate descriptions of KL—dark stairways, enticing cooking smells, a slight sense of tropical decay.

Do you know about the Ern Malley hoax, and have you covered it in Bytes?

Brett
the American one 😏

In response to your enquiries, the answers are Yes and Yes.

The item was posted on  July 3 2010 and can be read by clicking on:
http://bytesdaily.blogspot.com/search?q=ern+malley

From Bruce C, also in response to the KFC post:

Re your KFC post: as I recall, the real passion for Harland Sanders wasn't the chicken, it was the gravy. He used to visit KFC locations, where the first thing he would do was to taste the gravy -- and, if the gravy wasn't right, he would go ballistic!

An email also from Steve M in response to the 50th anniversary Woodstock post:

Wonderful Bytes today Otto, thank you! I still have both Woodstock albums, numbers 1 and 2 and I still play them! Awesome music, great musicians, a wonderful festival. Wish I could have been there.

In the next few days I will reprint an article drawn to my attention by son Thomas, which puts  a contrary view on the significance of Woodstock.