I recently posted an item about future predictions. It inspired a contribution by Graham E, today’s G Spot, and comes from the following site:
https://flashbak.com/wonderful-futuristic-visions-of-germany-by-artists-in-1930-381451/
Thanks, Mr E.
Graham’s email:

Hi Mr O,
Not sure if you have seen these visions of the future, they were part of a collector’s album issued in 1930 by Echte Wagner, a German margarine company which issued several albums of cards between the wars. Each image came with an explainer on the back. 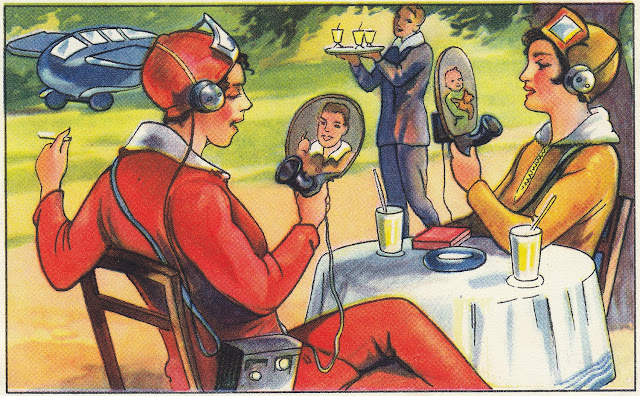 Wireless Private Phone and Television.
Everyone now has their own transmitter and receiver and can communicate with friends and relatives. But the television technology has also improved so much that people can speak to each other in real time. Transmitters and receivers are no longer bound to their location, but are always placed in a box of the size of a camera.
_______________ 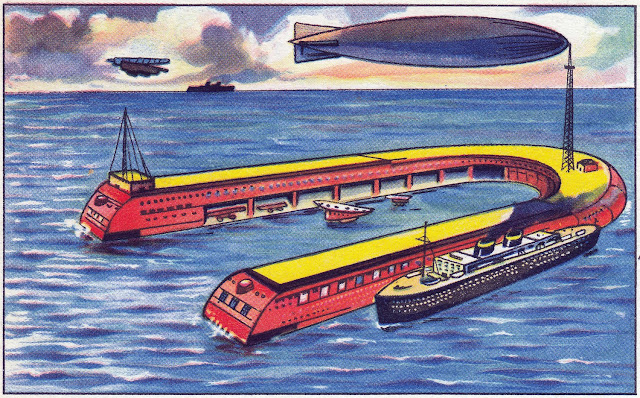 Artificial Island
Since there is no island airport on the shortest route to America, there could be an artificial landing place in the middle of the ocean. Of course, there are hotels, baths, restaurants and a cinema on the island.
_______________ 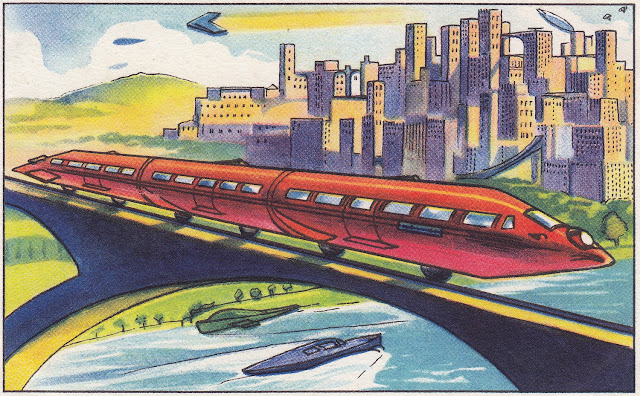 Monorails
In order to increase the speed of traffic, we will build single-lane expressways on which carriages run on two wheels, one behind the other. The cars are streamlined to minimize the air resistance. A heavy gyro is installed in the traction unit, the axle of which is resistant to all tilting. To ensure that the train does not jump the rail, which would be a disaster at 500 km, it features stabilization surfaces just like a rocket car.
_______________ 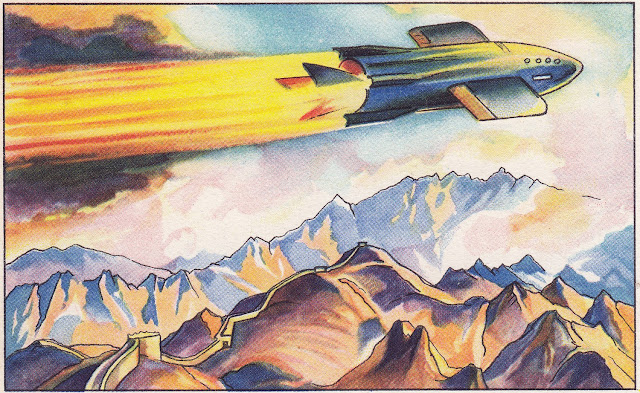 Rocket Ships
The future of aircraft is rockets. Rockets are installed at the stern. Escaping gases propel the aircraft forward. Nankou is a city on the north coast of China. Because the rocket ship can attain speed of 1000 km, it takes less than 8 hours for the Berlin-Tokyo route. A steamboat takes about 50 days today!
_______________ 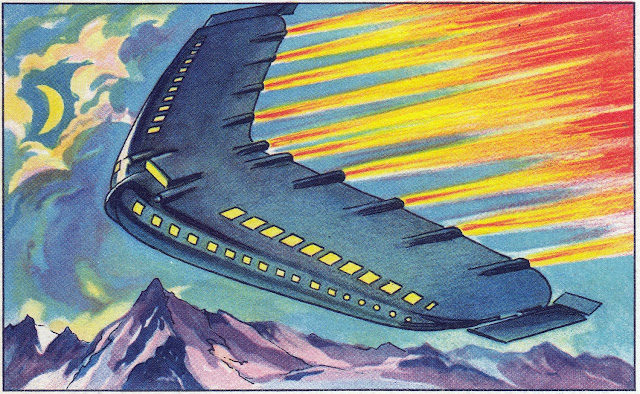 Flying Wings
The Rocket Wing is shaped like a parabola. The lavishly furnished cabins are installed in the wings and hold 400 passengers. Because there is no longer a fuselage, the control fins are located at the ends of the wings. The driver’s cab, from which the rockets are controlled, is in the middle of the crossroads.
_______________ 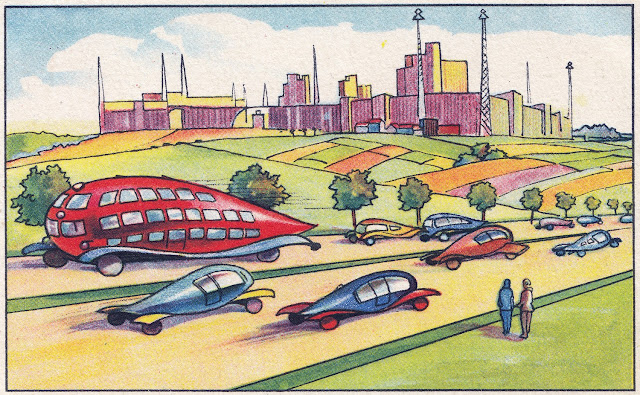 Nuclear-Powered Cars
Tomorrow’s car is powered by a tiny engine, driven by the nuclear power. The speed of the cars has grown accordingly. They travel at 200kph-300kph an hour on city roads. On faster roads, speeds of 1000kmh are achievable.
_______________ 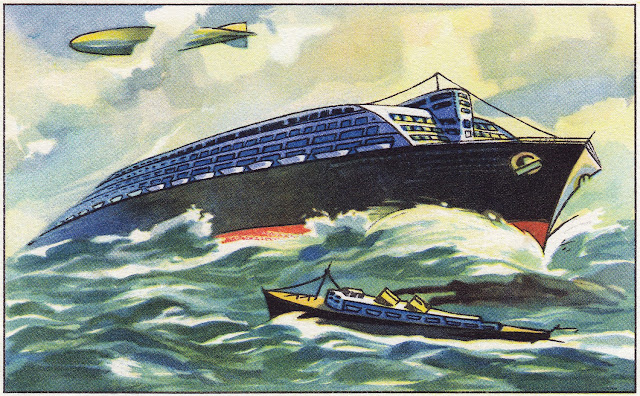 An Ocean Giant
The shape of the steamer has changed significantly. All the bulky constructions have disappeared, not even a chimney can be seen. So the size of the steamers has grown: the ship shown here carries 20,000 passengers in two days from Hamburg to New York.
_______________ 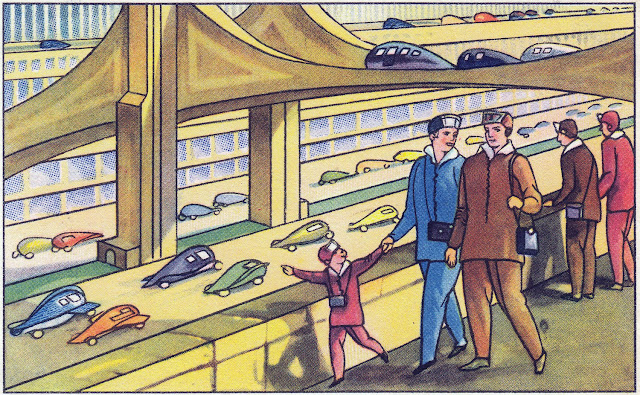 Motorways
The horses are extinct and electricity has replaced steam. The pedestrian is no longer afraid of the dangers of traffic, because the road and footpath are strictly separated. All men and women wear uniform clothing: zipped up skirts and trousers.
_______________ 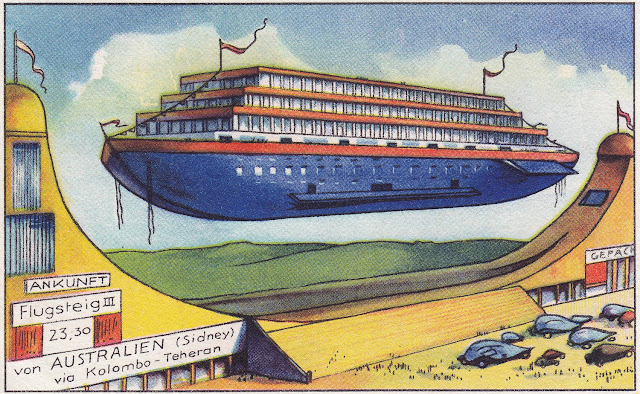 Landing An Airship
The airship shown here is just about to sink into its giant cradle. It is no longer lifted by gas and driven by motors, but by a transformer which is capable of changing gravity into repulsive force. This has made it possible to raise, lower and move even the biggest loads.
(Note that the sign shows the flight is from Sydney, Australia).
_______________ 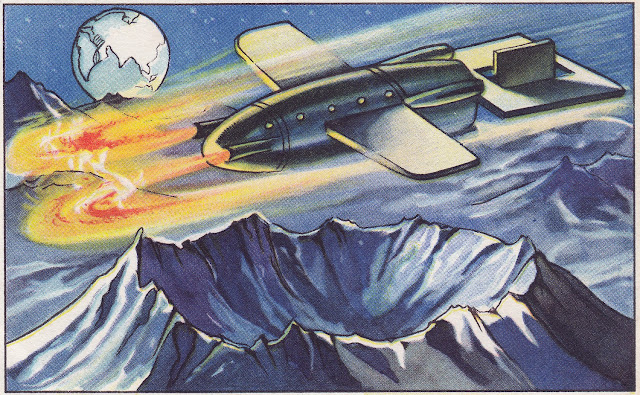 Moon Landings
Is this not a bad drawing? Do not the missiles have to ignite at the stern of the ship and spit their fire backwards? No, it’s all right! The ship is landing. The brake booms have been blown up and the craft has decelerated rapidly. Now you can comfortably land on the Moon.
_______________ 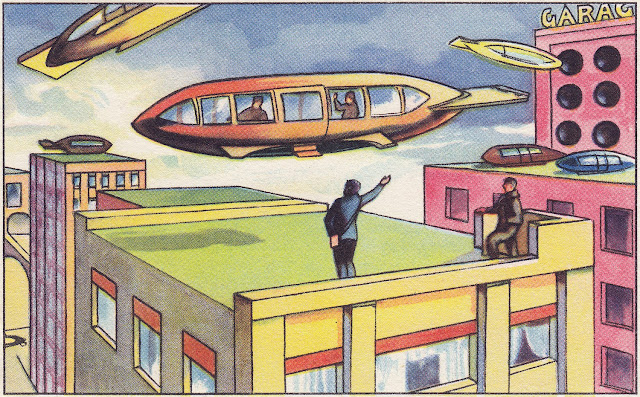 Planes For All
Here we have the opportunity to each own our own plane. Where are the propellers? No need for them. These plane rises and fall vertically. The engine is a small capsule, in which the atomic breakdown takes place. On the right you can see an airplane garage and an air-conditioned car park.
_______________ 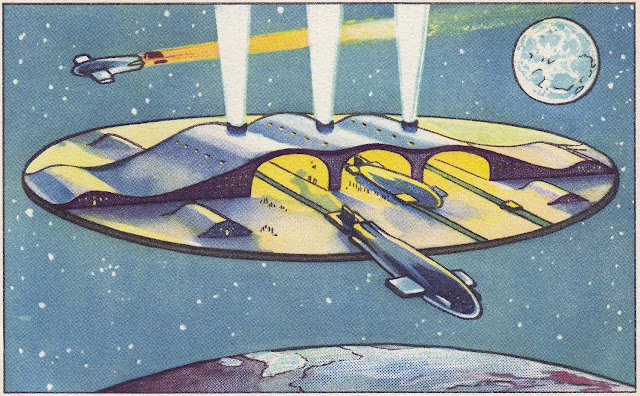 Spaceship Port
Because there are rare minerals on the moon, America has constructed the Moma-AG (Moon-Minerals-yield-AG). Costing 20 billion dollars, space ships can dock and renew their rocket fuel. The port floats freely in space.
_______________
Posted by BytesMaster at 1:15 AM