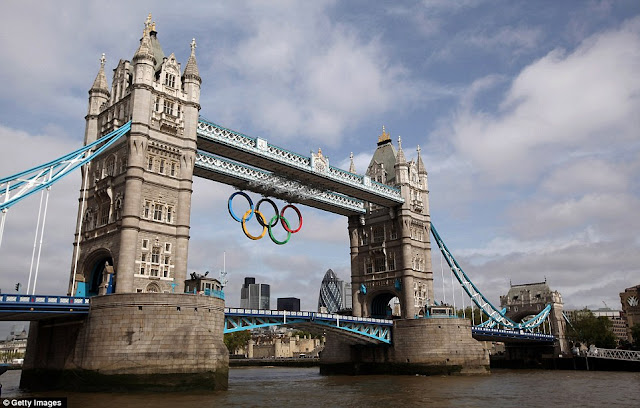 Byter Nadia sent me some fascinating pics of London’s Tower Bridge a little while ago (not the above pic).  Thanks, Nadia.


The bridge, an iconic symbol of London, will be seen quite a bit from next month when the London Olympics begin.  It was in the news recently when giant Olympic rings were installed at a cost of over £300,000.


Nadia’s pics show the bridge under construction.  Before looking at those images, here are some quick facts:


·       It is a combined bascule (ie drawbridge) and suspension bridge.


·       The bridge consists of two towers connected at the upper level by means of two horizontal walkways, designed to withstand the horizontal forces exerted by the drawbridge sections when raised.


·       The bridge is named after the Tower of London, which is located nearby.


·       It is often confused with London Bridge, that being the bridge upstream.  (The current London Bridge opened to traffic in 1973, replacing a 19th-century stone-arched bridge, which in turn superseded a 600-year-old medieval structure. This was preceded by a succession of timber bridges; the first was built by the Roman founders of London.  The 19th century bridge, when it needed replacement, was sold to American entrepreneur Robert McCulloch, who re-erected it in Arizona as the entry to a theme park in English style which includes a Tudor shopping mall).


Nadia’s item with the original photographs and text follows.  It is lengthy but mostly visual and I found it fascinating.:

This is one of the London's most beloved landmarks as you've never seen her before.


Stripped down to her underwear, the never before seen pictures of Tower Bridge - one of the world's most recognisable structures - have been unveiled after the stash of hundred-year-old prints were found in a skip.


Coinciding with the 125th anniversary of the bridge's foundation, the 50 sepia photos reveal in incredible detail the ingenuity behind one of the capital's most popular tourist destinations, which was the first bridge of its kind in the world. 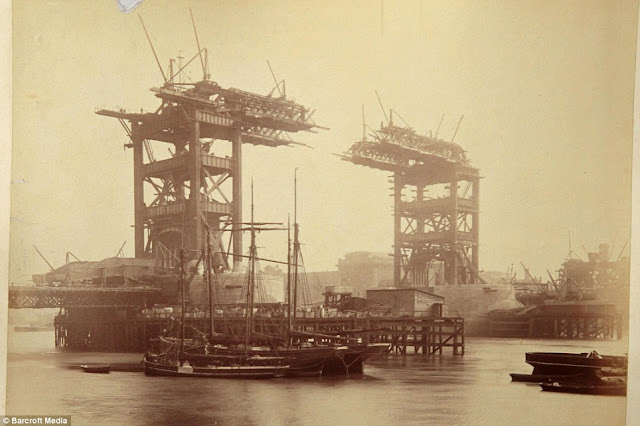 Never seen before: The pictures of London's Tower Bridge were found in a skip and then wrapped up in brown paper and put in a carrier bag under a bed.


The unique pictures, dating back to 1892, document the construction the iconic bridge, which at the time was a landmark feat of engineering nicknamed "The Wonder Bridge".


The discarded pictures, which were retrieved by a caretaker who was looking after a building being turned into flats in 2006, have spent the last five years in a carrier bag underneath his bed.


The 59-year-old, who wishes to remain anonymous, said that after the occupants of the Westminster office building moved out, the album and a number of documents were thrown into a skip outside.


He said: "I took the ledgers to the Tower Bridge Museum because I thought they might have some historical value". 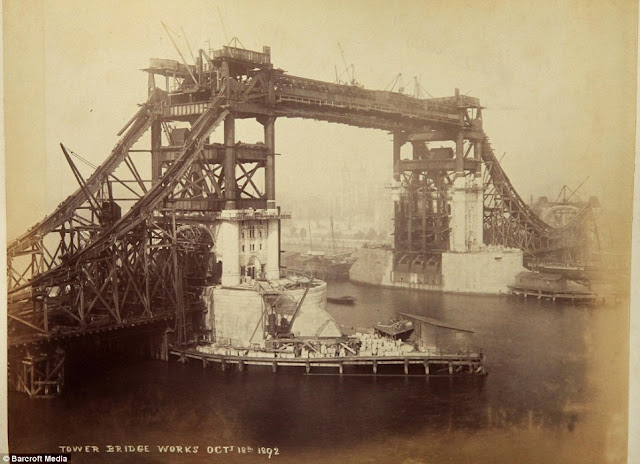 Remarkable find: The prints reveal in incredible detail the ingenuity behind one of the capital's most popular tourist attractions and how it was put together. 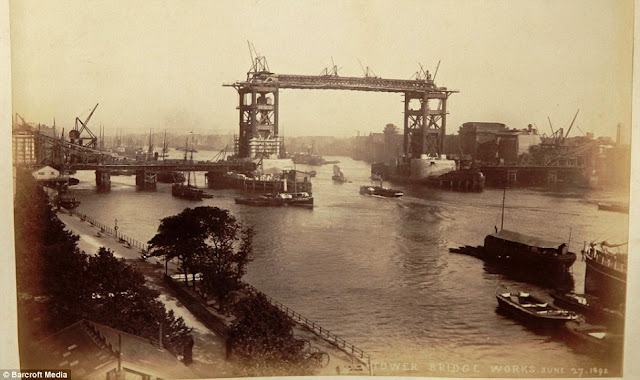 A view of the bridge: The sturdy steel frame of Tower Bridge can be seen, before it was covered with its distinctive stone-cladding on the orders of architect John Wolfe-Barry


“They included records of the materials and used in the bridge's construction and what they cost.  I told the man at the museum that I had also found some photos but he told me they already had plenty of those.  I didn't know what to do with them so I wrapped them in some brown paper and put them in a bag under the bed”


It wasn't until earlier this month, when the owner of the photos mentioned them to his neighbour, City of Westminster tour guide Peter Berthoud that the significance of the find fully emerged.


Mr. Berthoud, an expert in the history of London who gives guided tours around famous landmarks including Tower Bridge, said he was gobsmacked by the haul. 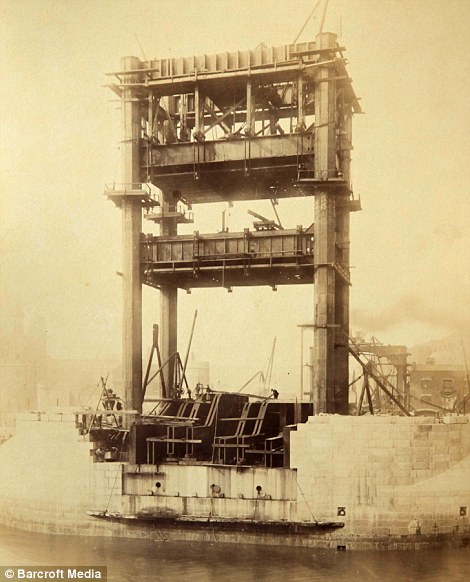 Stripped down: The photographs show how the bridge was put together over eight years, revealing why it was nicknamed at the time the 'Wonder Bridge' 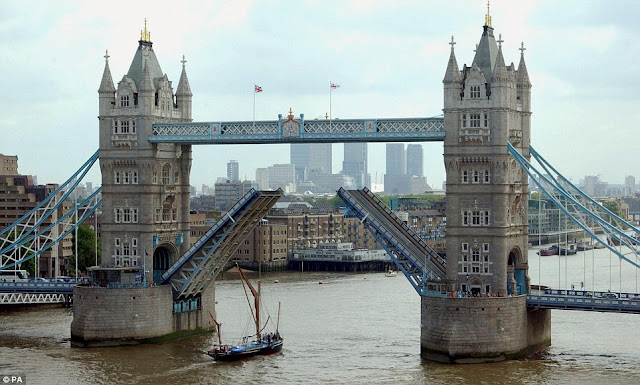 Landmark: Tower Bridge remains one of the capital's most iconic structures and a tourist attraction today, 125 years after building started 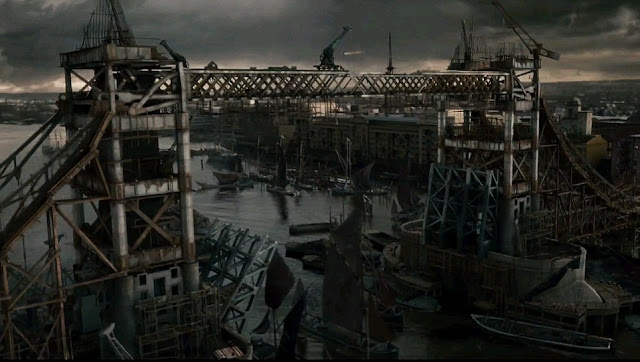 Sepia to silver screen: The incomplete Tower Bridge features in the 2009 film Sherlock Holmes, where Holmes battles with his adversary Lord Henry Blackwood.

And contrary to popular misconception, the images reveal the bridge is a sturdy steel frame beneath the instantly recognisable stone-cladding.

Mr Berthoud said: “When my neighbour gave me a disk with the images on I just couldn't believe it.I spent hours going through my books to see if these pictures were already around, but I couldn't see them anywhere - they are totally unique.  Quite simply London Bridge is the world's most iconic bridge, and it's the only bridge over the Thames which has never needed to be replaced at some point.” 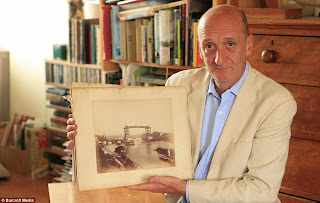 Discovery: Peter Berthoud was gobsmacked when his neighbour showed him the haul of photos. He spent hours going through books to find something similar, only to discover they are totally unique. 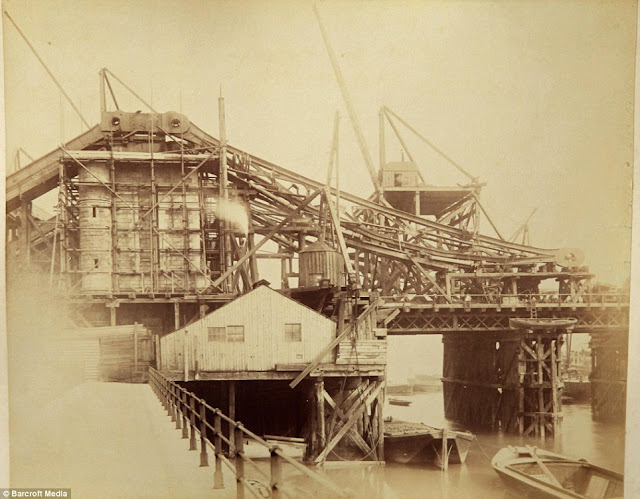 Transformation: The bridge took eight years to build and at the time was a landmark feat of engineering, combining elements of a suspension and high level bridge and a bascule

It combines elements of a suspension bridge, a high level bridge and a bascule which allows it to open for ships to pass.

Nothing had ever been made like it before, and nothing since.

People are always surprised when I tell them Tower Bridge is a steel bridge, as the stone cladding is so recognisable.

According to the tour guide, the bridge's original architect, Horace Jones, wanted to clad the bridge in brick, however, following his death he was succeeded as architect by John Wolfe-Barry who decreed the bridge should be clad in stone. 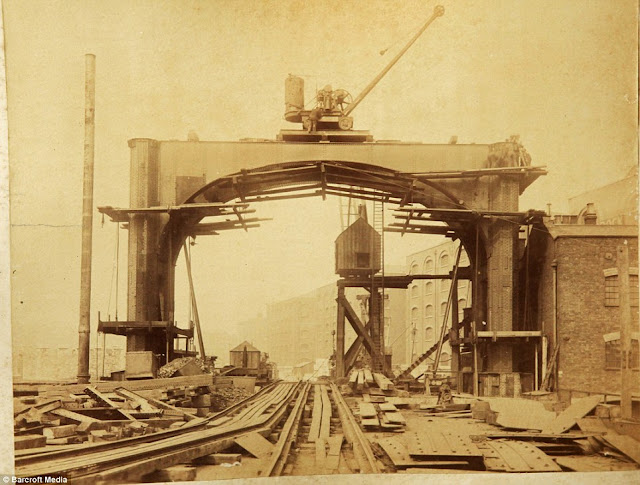 Development: Photos show the progress in the construction process, from basic structures to something easily recognisable as Tower Bridge as we know it today 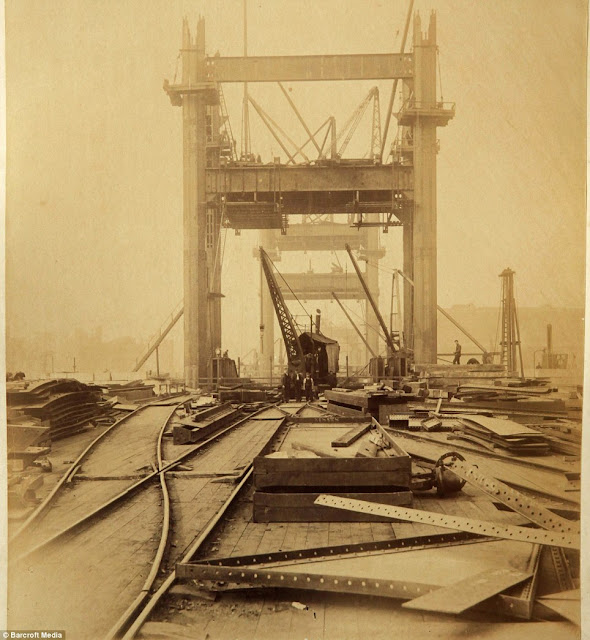 Unique: Many of the 50 sepia prints are in good condition, despite dating back to 1892. Several are even dated, making it possible to trace the progress in construction

Although many of the century-old pictures are in a state of disrepair, around 20 are in good condition.

Many of the 12 by 10 snaps are dated and clearly show how the bridge was put together over a space of eight years.

Memorable scenes include turn-of-the-century labourers taking orders from a site foreman in a bowler hat, and a shot if the bridge's original steam-powered engine room, which could open the bridge in less than a minute.

Mr Berthoud said "My favourite pictures of the simple, humble guys building the bridge, unaware that what they are making will be so historic"

People are so used to seeing images of the Empire State Building being built, but this is part of British history being created 50 years earlier.