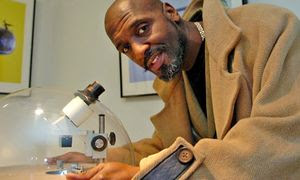 Having discussed matters citius, altius and fortius in respect of the London Olympics, let’s reverse it and look at something microious (I made up that word)...


Willard Wigan creates sculptures so small that they have to be viewed with a microscope and fit in the eye of a needle.  Some were posted at:
http://bytesdaily.blogspot.com.au/2010/07/art-dalton-getty.html


In honour of the Olympics, Wigan has made his smallest sculpture yet, so small that it is the size of a human blood cell.  The work, which took months to create, is of British Olympic diver Tom Daley on an eyelash.  Wigan created it using a microscope and painted it with the hair from the leg of a fruit fly: 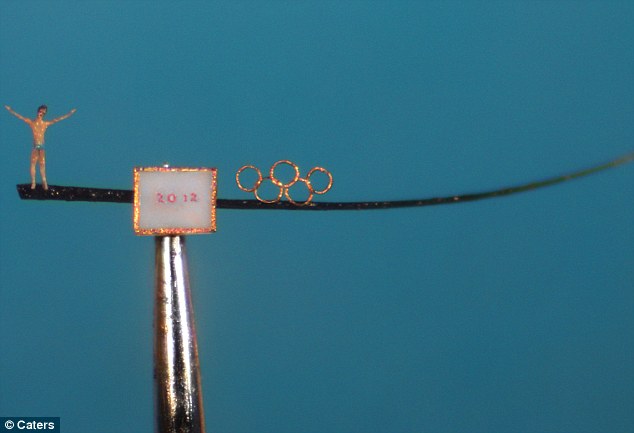 The Wigan sculture of Tom Daley 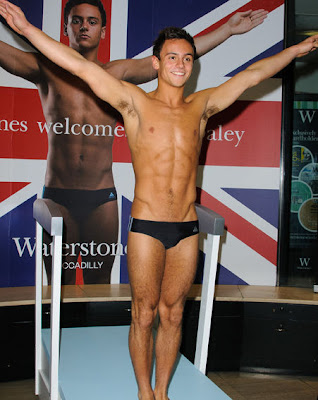 The idea came to me one day when I had an irritating eyelash in the corner of my eye and was trying to get it out but couldn't. I finally caught it and it was one of those very fine ones right in the corner.  I took it out, put it under the microscope and the first thing I noticed was that it looked like a diving board.  There is a lot of excitement about the Olympics coming up so I decided to make the smallest sculpture I've ever done for one of the biggest occasions we've ever had - and then to make it even smaller I cut it in half.

I have to work between my heartbeat - this is smaller than a blood cell. It was painstaking but because of my past experience I have learned special techniques like that. It's a very special piece. Most people will find it hard to understand. It's so small I'm even asking myself questions.

When I finished the sculpture I tried to put it onto the eyelash. But the first Tom I did literally sprang off the eyelash.  Each of the Olympic rings had to be symmetrical while the whole sculpture can fit on a full stop - including Tom and the rings.  My inspiration was Tom as I think he is going to win a gold medal, I'm a big supporter of his. I seriously believe he can take a medal and I'm sure he will.

The sculpture is made from 24-carat gold because at the end of the day we're going for gold. The '2012' measures about 4-5 microns, while Tom measures less than 20 microns.  It's called ‘In the blink of an eye’' and I'll be putting it on show for the public to see because seeing is believing.   My favourite sport is boxing and I'm hoping when people see this it will knock them out.  I'm hoping it will help raise some money for charity Help For Heroes each time it is exhibited.


Another Wigan micro sculpture, this time of runner Usain Bolt: 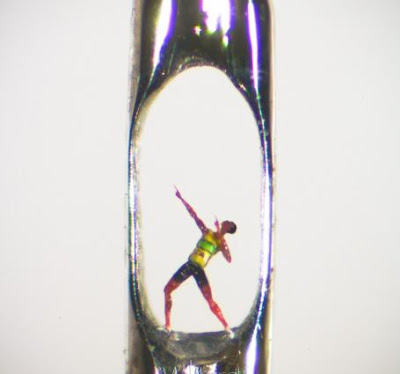 Posted by BytesMaster at 9:34 PM