Another reader request, this one having similarities to yesterday's item on Graffiti.

In the latest Churchill pics Bytes, you mention that the photo of the great mans’ not so great willy was taken in 1922 ‘before the days of paparazzi’.
My question is, when was the paparazzi first recognised or named as the “Paparazzi”, and who was its first exponent? 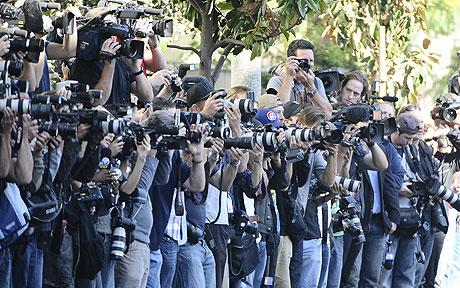 ·         Paparazzi is an Italian term that refers to photojournalists who specialise in candid photography of athletes, celebrities, politicians and prominent people.  They are usually independent of news and gossip mag publications, selling their photographs under contract.


·         In 1960 Italian director Federico Fellini made a film called La Dolce Vita (‘the sweet life”, “the good life”).  An Italian comedy drama, it follows a passive and jaded journalist’s week in Rome as he tries to find love and happiness. 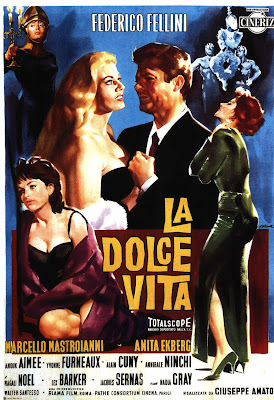 One of the characters in the film, a colleague of the journalist, is Paparazzo, a news photographer played by Walter Santesso. 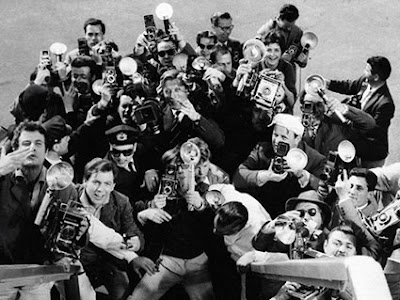 
·         One explanation holds that Fellini took the name Paparazzo from the Sicilian word papataceo, an oversize mosquito, or the Italian word pappataci, a small mosquito.  In an interview with Time magazine in 1961, Fellini said “Paparazzo… suggests to me a buzzing insect, hovering, darting, stinging.”


·         Ennio Flaiano, the film's co-screenwriter and the creator of the Paparazzo movie character, has said hthat the name was taken from Signor Paparazzo, a character in George Gissing’s 1901  travel book By the Ionian Sea (1901).  This explanation holds that either Fellini or Flaiano opened the book at random, saw the name, and decided to use it for the photographer.


·         After the film’s release in Italy, the term “:paparazzi” came to be applied in Italy to all pesky, intrusive photographers who chased prominent people to get a candid or revealing photograph.


·         Following the release of La Dolce Vita in the US in 1961, Time magazine published an article headed “Paparazzi on the Prowl”, concerning a mass of photographers blocking the car of a princess visiting Rome.  The article contains a photograph of the photographer throng with a description as "a ravenous wolf pack of freelance photographers who stalk big names for a living and fire with flash guns at a pointblank."


·         From there the term entered the English language and came to be increasingly applied to photographer celebrity bounty hunters, the term usually having unfavourable connotations.


·         Soon, the term would be spread across the pages of major news and entertainment publications across the globe, often accompanied by incriminating photos of the stars. Publications that were soon to follow this trend included Esquire, Cosmopolitan, and Life magazine. It was later introduced on the television screen by popular news-oriented shows like 60 Minutes. But no matter what the medium used to report on these celebrity bounty hunters, it was clear that paparazzo was a derogative term. 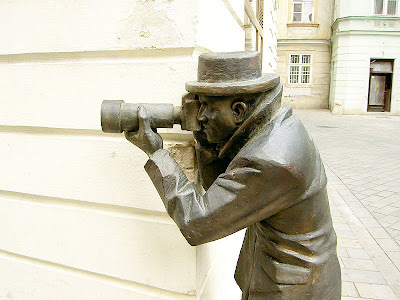 Statue of paparazzo in Bratislava, Slovakia

·         For those who want to stimulate their children’s imagination and perhaps set them early on a career path, there is a play set with paparazzi figurines available for purchase on the internet: 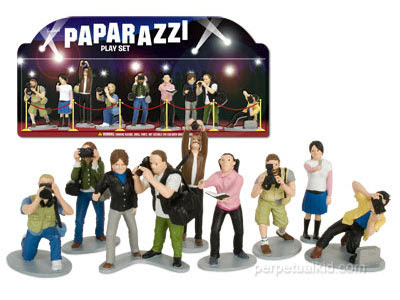 The blurb accompanying the ad reads:
Longing to be in the spotlight?

Now you can have the true red carpet experience. These eager paparazzi are poised and ready to snap your picture and get an interview.

Each set includes nine 2" to 4" tall, hard vinyl paparazzi, complete with a cardboard velvet rope to keep the throngs at bay.
http://www.perpetualkid.com/paparazzi-play-set.aspx

Posted by BytesMaster at 9:53 AM