The item below was sent to me by Byter Kieran G.  It's lengthy but take the time to read it to the end. 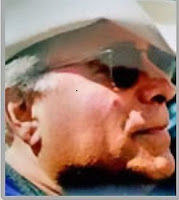 "The meaning of life is 'OOPS!'" was the preeminent philosophy of Jeffrey H. Cohen, D.C., who unexpectedly passed away Sunday morning at age 70 in the Squirrel Hill home where he was raised.

He bids "so long but not goodbye" to his fabulous wife, Carol Chisholm Cohen; sons, Dr. Michael (Nicole) Cohen of Tucson, Dr. Joshua (Maria) Cohen of Squirrel Hill, Jason Brown of New York and Justin Brown of Wilkinsburg; grandchildren, Cole, Julien, and Ava Cohen; and siblings, Sarah Cohen Brickenstein of Shadyside, Jane B. Cohen of Australia, and Mortimer "Herc" Cohen of California. He joins his parents, Dr. Harold and Harriet Cohen in the next world.

As a teenager, Jeff spent his summers working at Bear Creek Ranch in Montana, where he learned to ride horses, chew tobacco, and "shovel more horse manure than you've ever seen in your life." He took pride in being the only Jewish cowboy that he knew of. Jeffrey completed his undergrad at Pitt, then received his Doctorate of Chiropractic from Palmer College of Chiropractic, where he studied under mentor Dr. Raymond Nimmo, adopting his specialized brand of trigger-point (non-"cracking") chiropractic. Jeff opened his private practice on April Fools Day 1976, and would often joke that in those early years he had two waiting rooms: one where the patients would wait, and one where he would wait for the patients.

In time his practice grew and he became a renowned chiropractor, helping thousands of people in Pittsburgh and around the world. He became known as "The Chiropractor to the Stars," treating Gold Medal winning Olympians, members of Pittsburgh Ballet Theatre and the Pittsburgh Symphony, and professional boxers. He treated many of the Pittsburgh Steelers from the 1970s through the 2000s, including Franco Harris and L.C. Greenwood, with whom he would come to have a close, decades-long friendship. Liza Minelli flew Dr. Cohen to New York on several occasions, but at the time his sons were more impressed when he treated "Weird Al" Yankovic.

One of Jeffrey's most meaningful relationships was with Fred Rogers, to whom he became a confidant and source of relief from physical pain. Jeffrey wooed his wife Carol by singing her cowboy songs on his Martin guitar. Together they raised their four sons, imbuing them with the love of all things weird and quirky they shared. The family had many wonderful adventures together, often vacationing in Chautauqua, NY and at his beloved Bear Creek Ranch.

In later years Jeffrey established the Nimmo Educational Foundation and published many articles in scientific journals. He also became an Adjunct Assistant Professor at New York Chiropractic College, where he passed on his wide knowledge-base of chiropractic technique to a new generation of chiropractors. His Fifth Avenue practice remains open and continues under the leadership of his son, Dr. Joshua Cohen.

Recently, Jeffrey's prime source of joy was his family, especially his grandchildren. He also delighted in the many Akita dogs he had over the years, including current partners-in-crime, Indie and Jesse James.
Compassionate and kind, Jeffrey always put others before himself, happily and without hesitation. He had a special, healing touch and he brought relief to thousands of people over the decades. He was also a voracious teller of jokes of all kinds, especially dirty and groan-inducing ones. He had a great smile and all his teeth were still his.

Friends received at McCABE BROTHERS FUNERAL HOME, 6214 Walnut Street, Shadyside on Friday from 12-3 p.m., followed immediately by a celebration of his life from 3-4:30 p.m., with a reception for friends and family at the Bartlett Street home following the celebration.

Jeffrey would ask that in lieu of flowers, please do not vote for Donald Trump.

Whilst on the topic of Donald Trump . . .
A youth hostel in Paris, Belushi's, uses urinals that are in the shape of Mick Jagger's lips.  This has caused controversy and criticism. 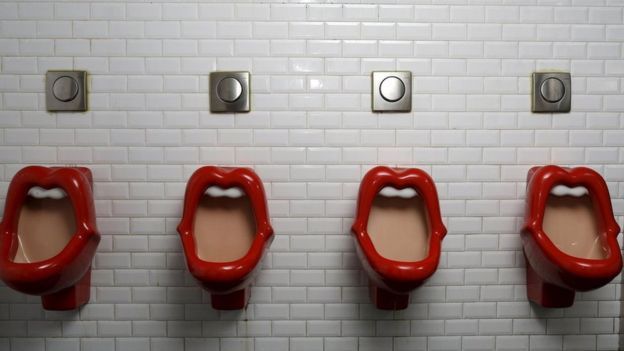 The design has spread to other locations . . .

. . . with one wit photoshopping Donald Trump into the scene: 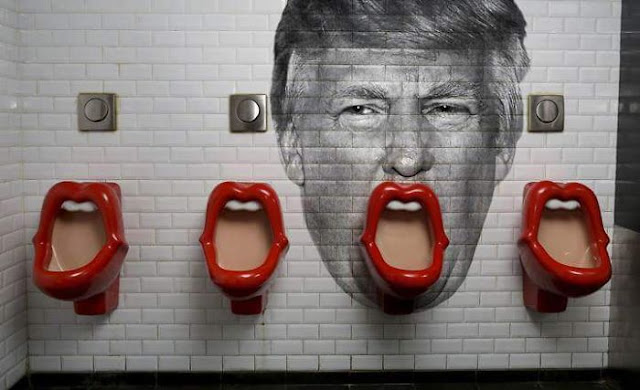 It's also possible to buy Donald Trump toilet paper, the product being marketed under the slogan "Dump with Trump!" 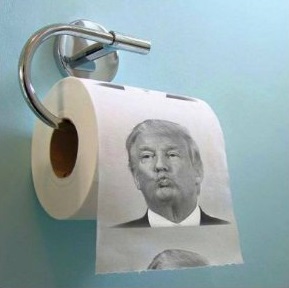 From the Urban Dictionary:

Northern to Midlands (England) slang for a fart, expelling of wind from the anus. 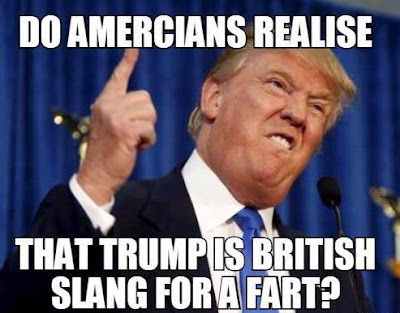 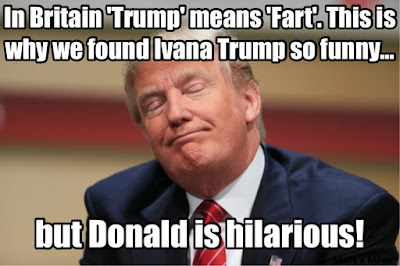