Only those residents of Sydney who have been in a coma for the last few days will have have missed the hype about the International Fleet Review taking place here at the moment. Apparently it marks 100 years since the Royal Australian Navy fleet first entered Sydney Harbour. As part of the celebrations various nations including the United States, the United Kingdom, France, India, Singapore and China have sent ships to Sydney. Britain also sent Prince Harry. 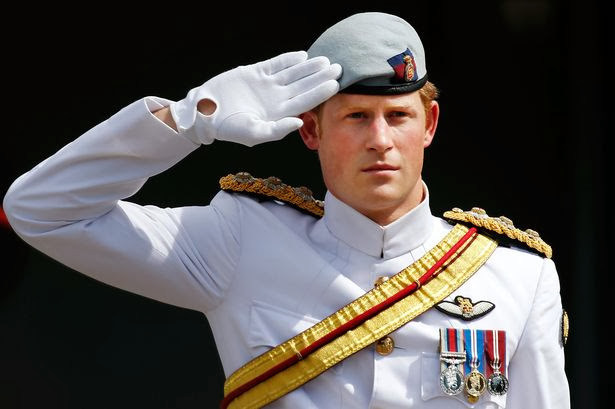 “...the International Fleet Review was planned in partnership with the NSW Government and the City of Sydney and will draw around 40 warships, 16 tall ships, more than 60 aircraft, 10 military bands and 8,000 sailors from 17 nations around the world. The nations participating include Australia, Brunei, China, France, India, Indonesia, Japan, Malaysia, Micronesia, New Zealand, Nigeria, Papua New Guinea, Singapore, Spain, Thailand, Tonga, United Kingdom and the United States of America. The long weekend brings a full schedule of activity for the International Fleet Review including a fireworks and lightshow display on Saturday night.”

Today’s post, the last item of Pictorial Week, is not about the International Fleet Review but about another fleet that visited Sydney many years ago and caused the locals to go ga ga. It was called the Great White Fleet, it was from the US and it happened in 1908. 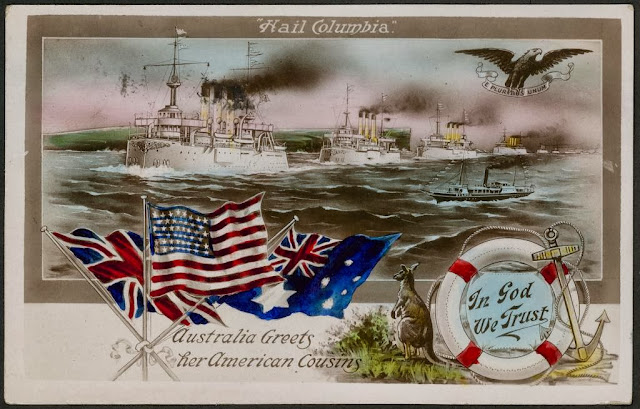 The Great White Fleet was a battle fleet from the United States Navy that circumnavigated the globe between 1907 and 1909. Sent by President Teddy Roosevelt to demonstrate growing military power and navy strength, especially in the Pacific.  It also sent a clear message to the world, particularly to Japan which was also growing in power, mess with us at your own risk. The fleet consisted of 16 battleships and escorts and 14,000 men. The ships were painted white to denote peace and had red, white and blue banners on their bows.

The fleet was hugely welcomed by local populations at each of its ports of call.

Sydney was no exception when the fleet arrived on 20 August 1908.

The fleet was given a tremendous welcome. Thursday 20 August 1908 was a public holiday and a week long celebration followed. Fleet Week celebrations and entertainments included the Official Landing and Public Reception, a review at Centennial Park, parades, luncheons, dinners, balls, concerts, theatre parties, sporting events such as boxing, football and baseball matches, a gymkhana including a tug-of-war and a regatta.

Buildings and streets were decorated and illuminated at night. There were daylight and night time fireworks displays.

Excursions were arranged for the Americans to visit Manly, Parramatta, Newcastle, The National Park, the Illawarra and the Blue Mountains.

The fleet stayed in Sydney until its departure for Melbourne on 27 August 1908.

As a result of the 1908 visit, the Australian/American alliance was established; Australia reduced its reliance on the British Royal Navy and established the Royal Australian Navy. 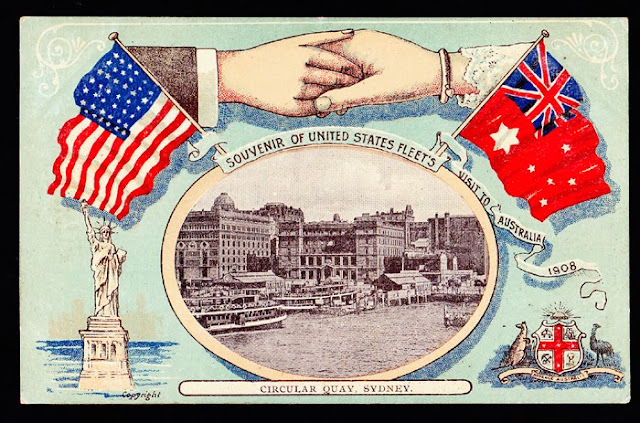 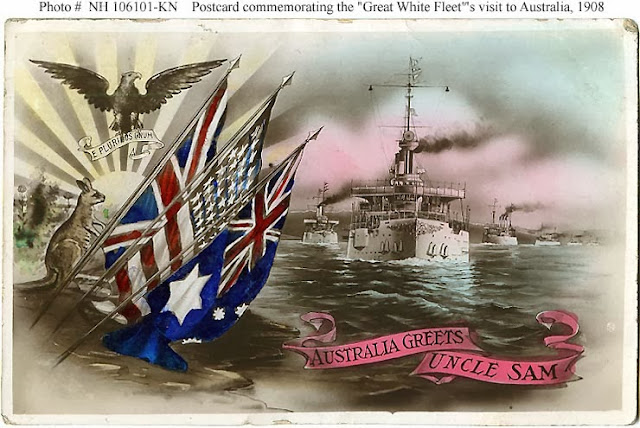 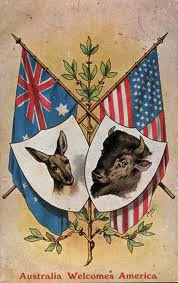 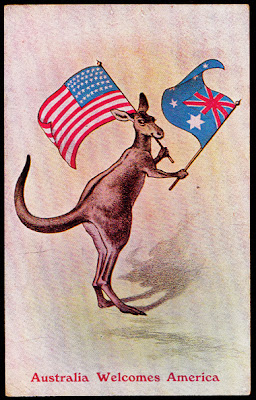 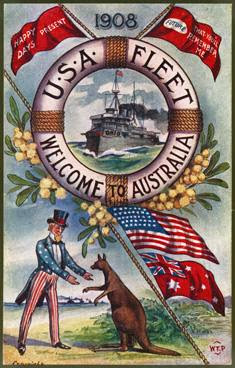 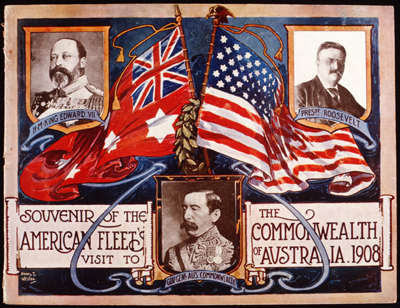 The fleet in Sydney Harbour: 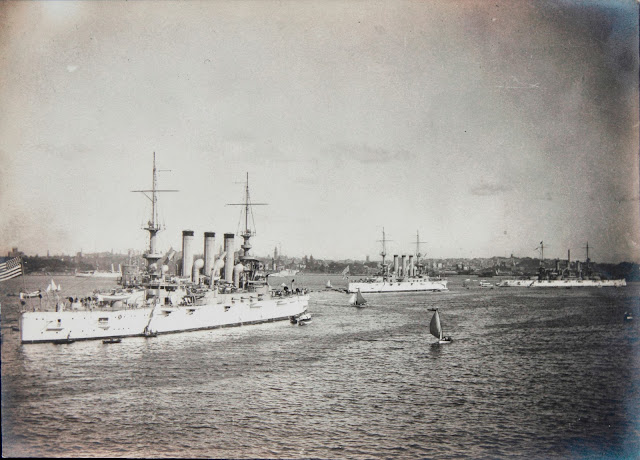 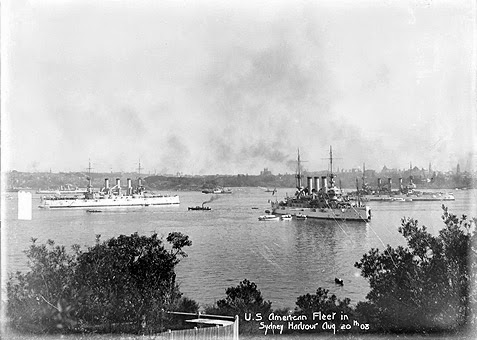 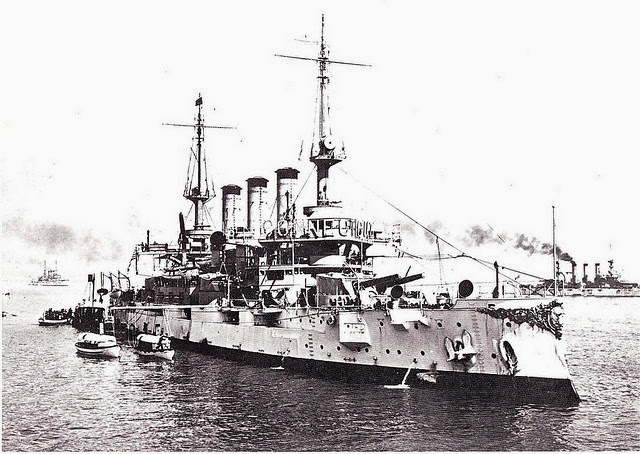 USS Connecticut, leader of the fleet 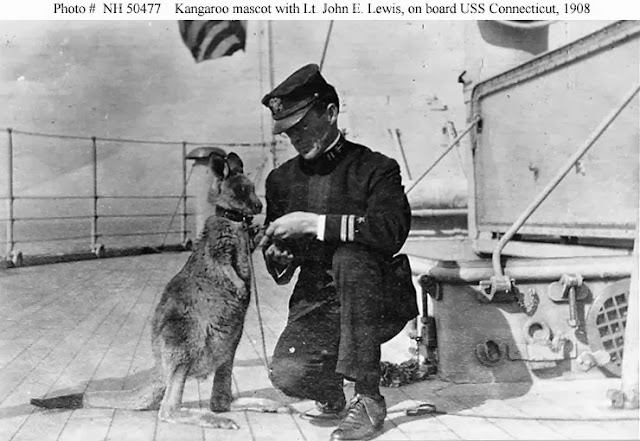 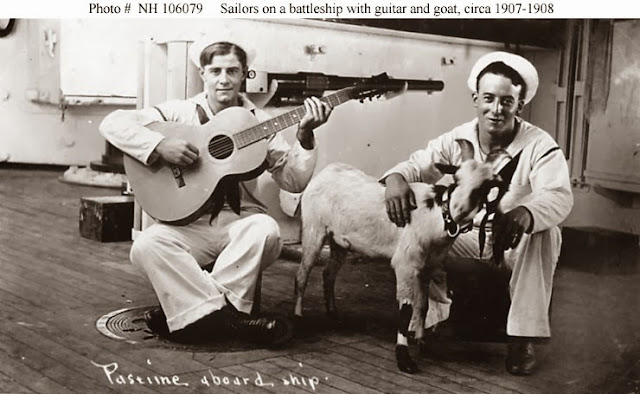 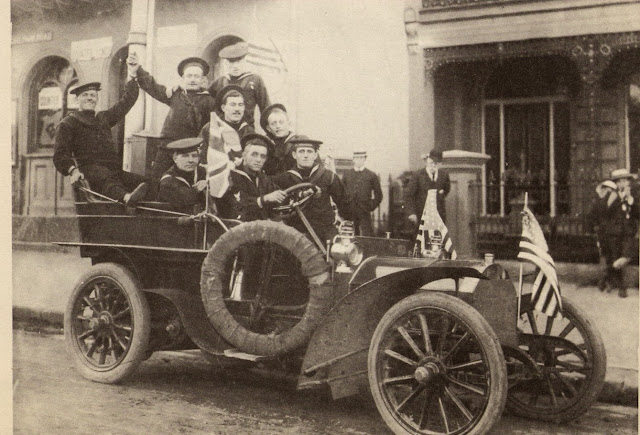 Crew from the "Minnesota" enjoying themselves in a chain driven Napier car, Sydney 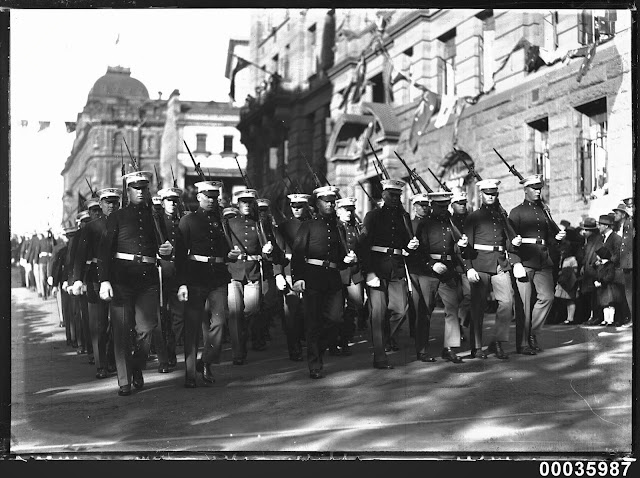 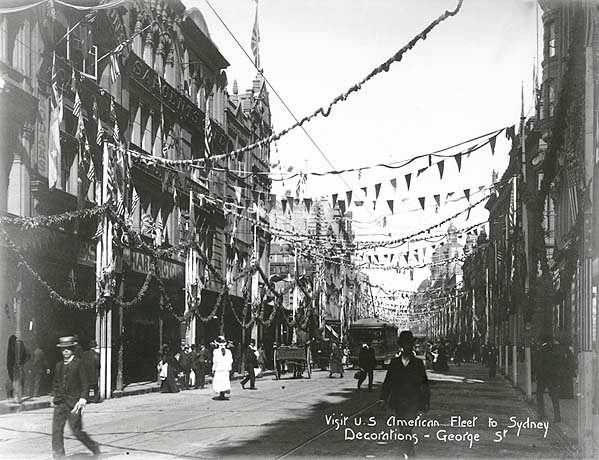 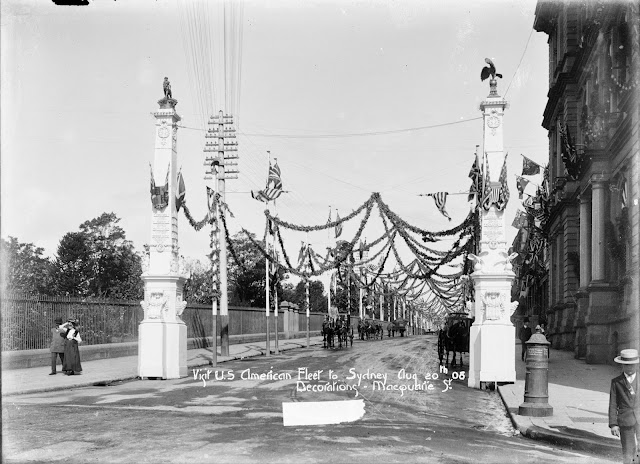 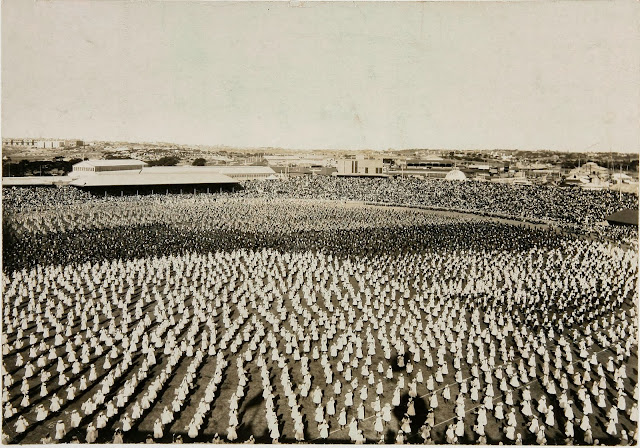 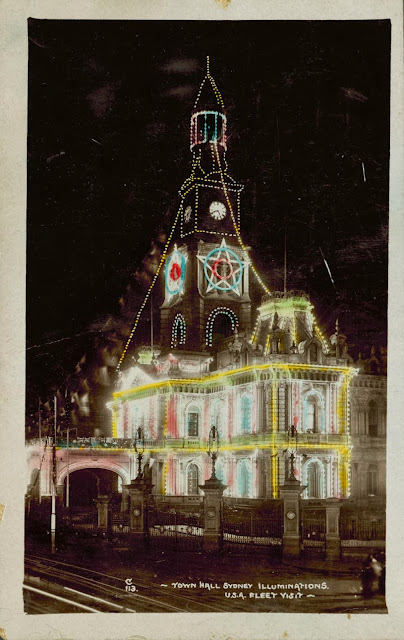 Advertisers were also alert to the possibilities of the visit of the Great White Fleet to Sydney. One postcard shows an English lion, a kangaroo and an emu standing on Sydney Heads to greet the fleet with the text ‘laxo-tonic pills cures all ills’ appearing discreetly on the rock beneath the animals’ feet. 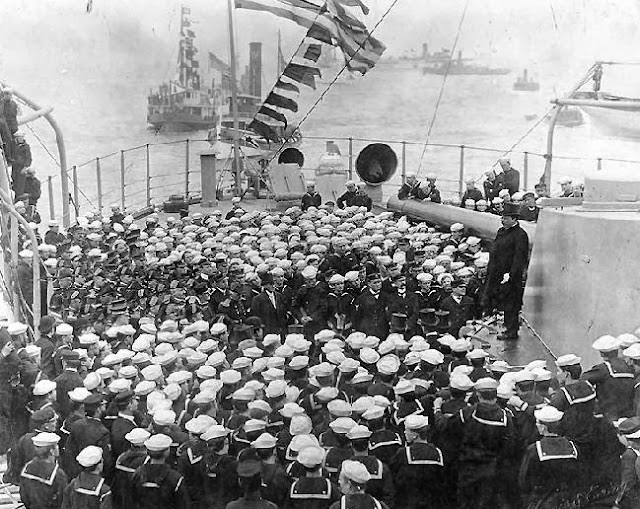 Teddy Roosevelt speaks softly to crew members of the Connecticut on return from the Fleet's two year mission to explore strange new worlds, to seek out new life and new civilizations, to boldly go where no man has gone before. voyage around the world, 22 February 1909.