Caution: graphic images that may disturb

If 1965 had been a good year for Kyoichi Sawada, Japanese UPI photographer, for scoring the World Press Photograph of the Year for his photo of a South Vietnamese woman wading a river with her 4 children to escape American bombing*, 1966 was an even better year for him: he collected both the 1966 Pulitzer and  the 1966 World Press awards.

The 1966 Pulitzer, as for Horst Faas’s award in 1965, was for a portfolio of his works, in Sawada's case form 1965, that included the image of the woman wading the river. 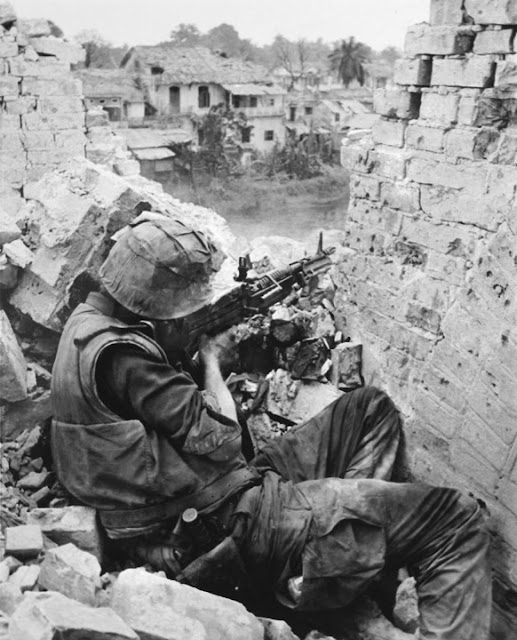 On the alert. Hue, South Vietnam: From an elevated position behind a shattered wall,a U.S. Marine keeps his gun ready as he looks for the enemy along a canal Feb 14th. 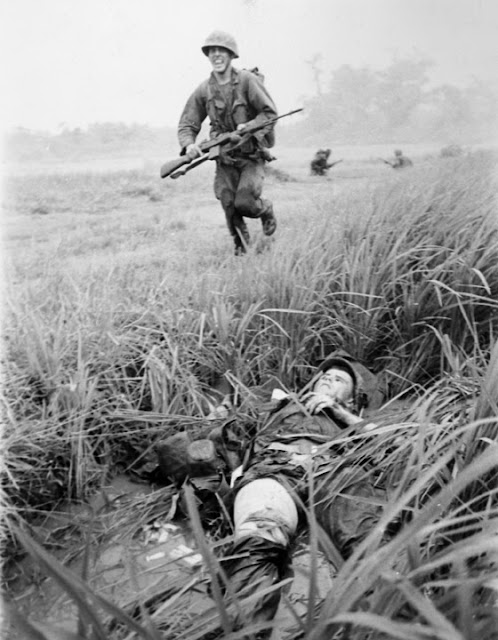 Help on the way. Saigon: A wounded Marine lies in a paddy field as a buddy races to his aid during Operation Deckhouse 4 just south of the Demilitarized Zone Sept 17th

One of Sawada's photographs in his portfolio showed two mothers struggling for their lives as they tried to get their children to safety across a river while American planes dropped bombs and napalm on their hamlet just beyond the other side. After he was awarded a Pulitzer for the portfolio that included this photo, Sawada searched for the two families, with only his photo as a guide. He found both, and he gave each a copy of the photograph, and each one half of his Pulitzer Prize cash award. He kept none of it for himself.

The following is from an item by Bill Snead, the head of the UPI Photo Bureau in saigon when Sawada was a staff photographer, and can be read at:

Editing Sawada's negatives was effortless. I remember one time he had 15 usable, different pictures on one 36-exposure roll of Tri-X. One day in 1969, Sawada came to my apartment and asked if we could talk. Over a cup of tea (he neither smoked or drank) and after a lot of beating around the bush, Sawada asked for a raise. As a combat photographer he was making $215 a week. He was the highest paid UPI photographer in Vietnam. My heart sank when he told me Life Magazine had offered him a job for a lot more money. But, he said, his loyalties were with UPI. I agreed that he deserved more money and suggested we go downstairs to Gene Risher's apartment. He was the UPI Bureau manager and requests for more money required a joint effort.

Risher let us in and the three of us stood in the living room. Sawada stood silent. I explained in detail that I thought Sawada deserved a raise and was wondering just how we would put the paperwork through to Tokyo. With his cigarette clinched in his teeth FDR style, Risher asked Sawada how much money he made. I could hear Sawada hiss. He was disturbed. Barely audible he said, "$215 a week." Risher looked at him with a big grin and said, "That's pretty good for a Japanese isn't it?"

The noise from Sawada, inhaling air through his teeth, filled the room as he walked out the door. I shamed Risher into getting Sawada's raise but things were never the same between them after that. 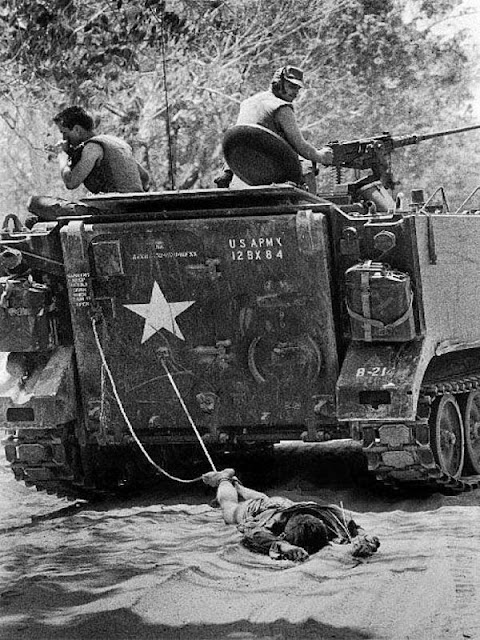 The above photograph gave Koichi Sawada his second World Press Photograph of the Year, the previous win having been in 1965.

On 18 August 1965 ANZAC forces clashed with Viet Cong and North Vietnamese units inn the battle of Long Tan. 105 Australians and a 3-man New Zealand artillery team battled an enemy force estimated at between 1,500 and 2,000.

At the end of the battle 18 Australians were dead, as against 245 insurgents dead. In later years, it was found out that the ANZAC’s had run into a reinforced regimental force waiting to attack Nui Dat

The Battle of Long Tan was one of the heaviest conflicts of the Vietnam War as well as one of the few battles in recorded history to be won against such odds.

Sawada’s above photograph was taken in the aftermath of that battle. It shows American soldiers dragging the body of one of the dead Viet Cong to a burial site and illustrates the indifference toward brutality that marks many of those who spend too long in a warzone.

The publicity about the photo was a significant blow to Western pro-war sentiment and morale.

Although Sawada experienced many atrocities first hand, he found it hard to talk about. His widow later confided that he wasn't pleased to win in 1966, as the tragic photo upset him.