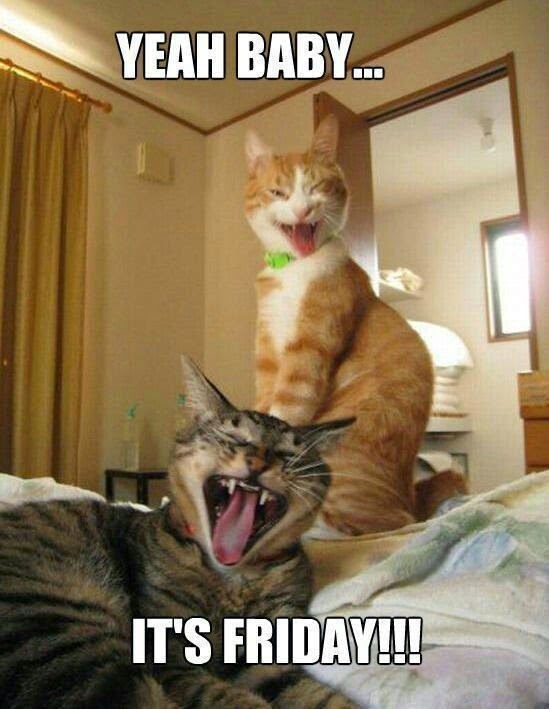 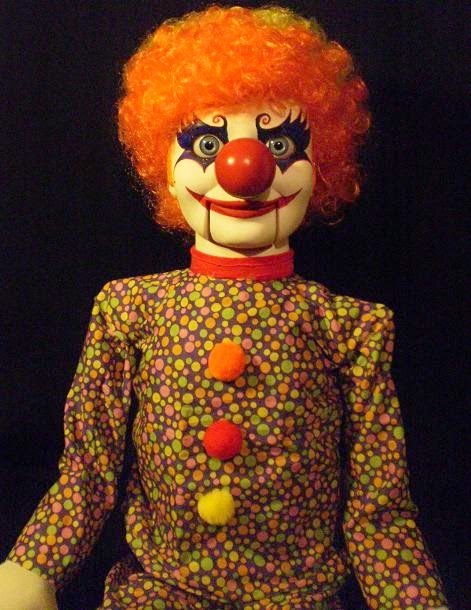 Here are some ventriloquist items to round off the week . . .

* * * * * * * * * *
An Australian ventriloquist visiting New Zealand walks into a small town and sees a local sitting on his porch patting his dog. He figures he'll have a little fun.

Ventriloquist: "G'day! Good looking dog, mate. Mind if I speak to him?"

The Kiwi gets a look of extreme shock on his face.

Ventriloquist: "Is this Kiwi your owner?", pointing at the Kiwi.

Ventriloquist: "How does he treat you?"

Dog: "Real good. He walks me twice a day, feeds me great food, and takes me to the lake once a week to play."

Ventriloquist: "Mind if I talk to your horse?"

The Kiwi gets even more shocked.

Ventriloquist: "Is this your owner?"

Ventriloquist: "How's he treat you?"

Horse: "Pretty good, thanks for asking. He rides me regularly, brushes me down often, and keeps me in the barn to protect me from the elements."

Now the Kiwi has a look of total amazement on his face.

Ventriloquist: "Mind if I talk to your sheep?"

To which the Kiwi replied, "The sheep's a liar." 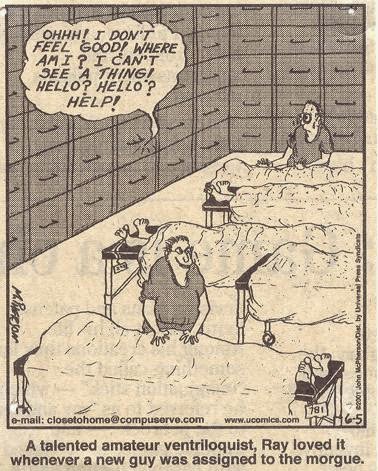 The next morning's newspaper carried the news item:

* * * * * * * * * *
Sometimes there’s not much work around. In times like these, this is often especially true for ventriloquists. One day, two out-of-work ventriloquists are talking on the phone to each other and lamenting their condition. The older one says, “Just between you and me, I’ve been moonlighting lately as a medium.”

The young ventriloquist is quite impressed. “Really?” he says. “I didn’t know that you were psychic!”

“Well, to tell you the truth, I’m not,” confesses the older man. “But what I did was rent a storefront and bought a small round table, a crystal ball, and a turban. Then, when people come in, I throw my voice and they think that they’re talking to their dead relatives.”

“What a great idea!” says the young ventriloquist.

“You should try it too,” suggests the first man. “You’ll see, it works great.”

The next day, the young man goes out, rents a little storefront, and buys a table, a crystal ball, and a turban. He opens up for business, and an hour later a middle-aged woman walks in. She sits down at the table across from the ventriloquist and asks him, “Can you put me in touch with my long-lost husband?”

“I sure can!” he answers. “Why, for just a hundred pounds, you can hear your husband speak to you from behind that curtain over there. Now I must warn you that his voice might sound a little different, but that’s because he’s talking to you from the spirit world.”

“For a hundred and fifty pounds,” the ventriloquist says, “you could have a two-way conversation with your husband, and talk back and forth with him.”

The woman’s voice rises in anticipation as she asks, “You mean, I could communicate directly with my dear departed Hubert?”

“Not only that,” says the ventriloquist, getting just as excited as the woman, “but for two hundred pounds, you could actually carry on a two-way conversation with your husband while I’m drinking a glass of water!”

* * * * * * * * * *
A young ventriloquist is touring the clubs and stops to entertain at a bar in a small town. He's going through his usual run of stupid blonde jokes, when a blonde woman in the fourth row stands on her chair and says, "I've heard just about enough of your denigrating blond jokes, arsehole. What makes you think you can stereotype women that way? It's guys like you who keep women like me from being respected at work and in my community."  Flustered, the ventriloquist begins to apologise.  The blond says, "You stay out of this, Mister! I'm talking to that little bastard on your knee!" 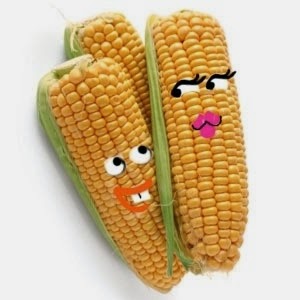 I had to quit hanging out with my buddy who's a ventriloquist because he was constantly putting words in my mouth.