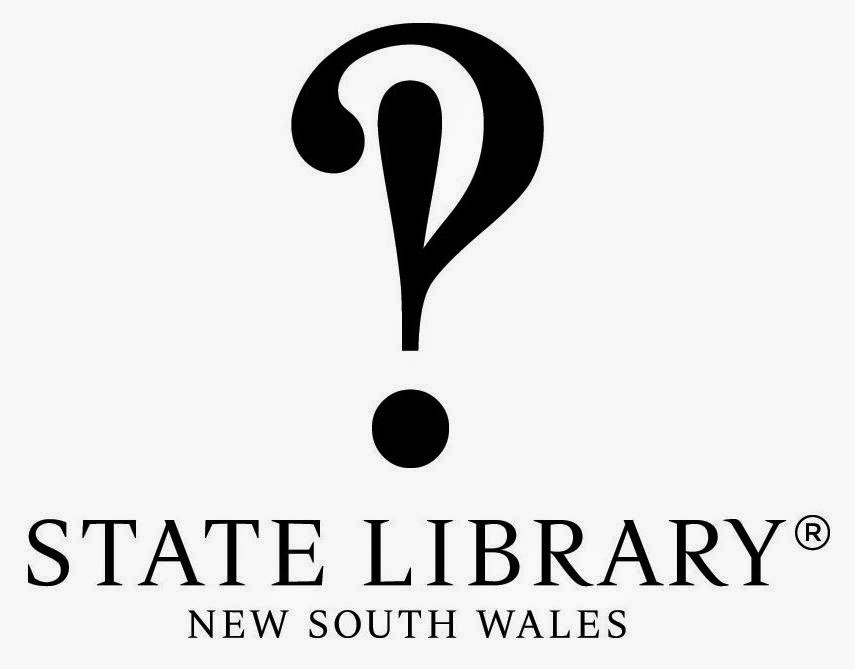 Some time ago I posted images of black and white World War 2 scenes stitched with modern day colour photographs of the same scenes. The juxtaposition of Soviet and German troops with present day pedestrians, of military vehicles, tanks and artillery in the streets contrasted with the streets as they appear now, was both fascinating and sobering.

An exhibition which started yesterday at the State Library of New South Wales does the same sort of thing but without the element of war.

The following description is from the State Library website at
http://www.sl.nsw.gov.au/events/displays/index.html

Sydney Transitions: 1914 / 2014 explores changes in our society by focussing on physical landmarks that have remained the same over the century as all around them the community continues to evolve. Sixteen digital montages combine century-old images sourced from the collections of the State Library of NSW with photographs of the same location today taken by 702 ABC Sydney’s John Donegan.

Below are some of John Donegan’s Sydney images combining images from around 1914 with those from 2014. The images and captions are from the ABC website, click on the images on that website to see them in a much larger size. To get to the website, click on the following link:
http://www.abc.net.au/news/2014-07-25/sydney-transitions-1914-2014-digital-montages-of-changing-city/5630156 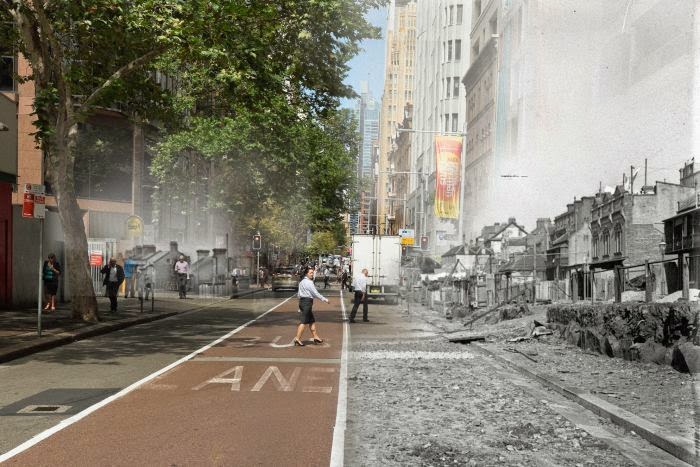 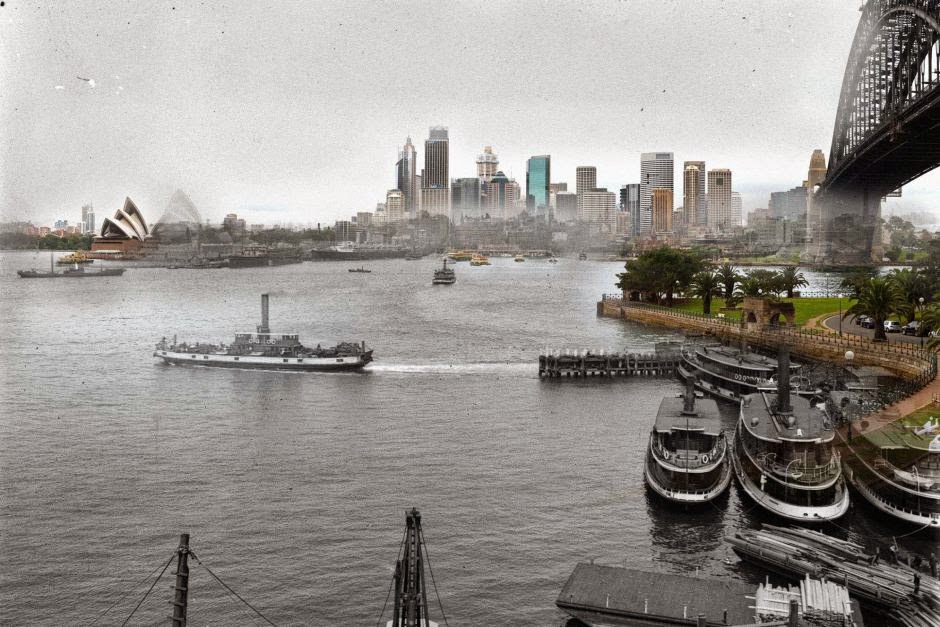 The view of Circular Quay from Milsons Point shows the great changes of the Sydney skyline over 100 years: The Opera House replaced a tram depot at Bennelong point; the Harbour Bridge connected the north shore to the city; and the skyline has seen six storey 'towers' dwarfed by skyscrapers. Despite all this change, ferry activity continues unabated. 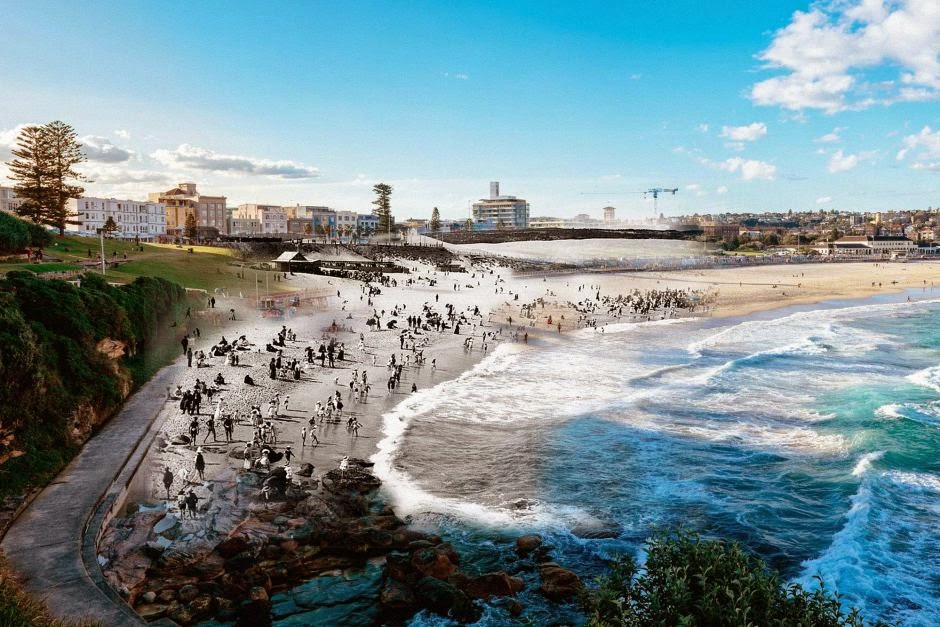 Before the advent of tourist shops and backpacker hostels, the famous Bondi Beach was as popular a day trip 100 years ago as it is today. The sand dunes have been replaced with rolling hills of grass. 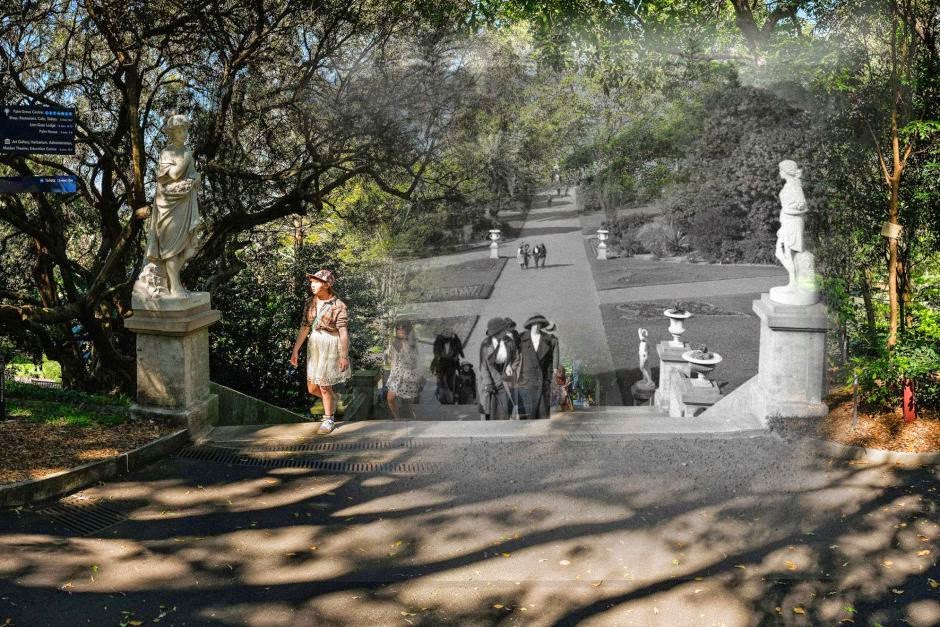 Palace Garden Steps, The Royal Botanic Gardens. The paths, garden beds and statues laid out before WW1 still provide a pleasant destination for tourists, now coming from around the globe. 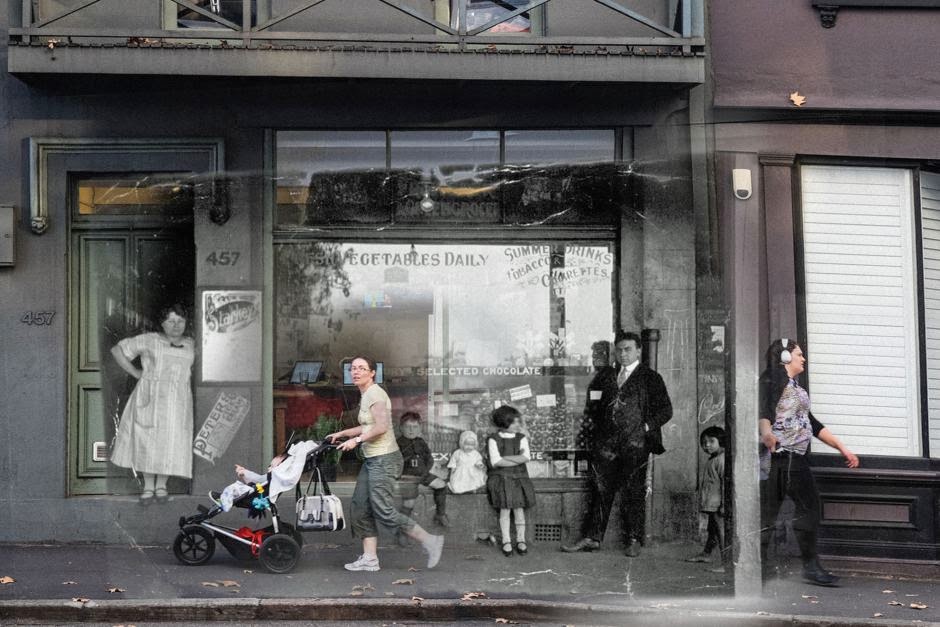 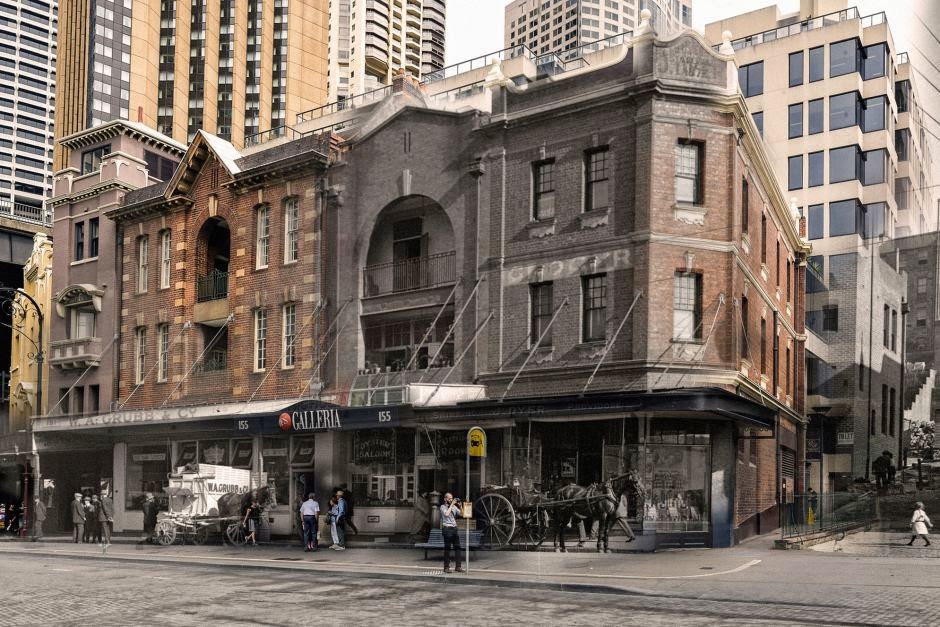 The building at 145–151 George Street, Sydney is little changed over a century as the historic Rocks district was protected from development, though the use of the building has changed considerably, as the signage shows. 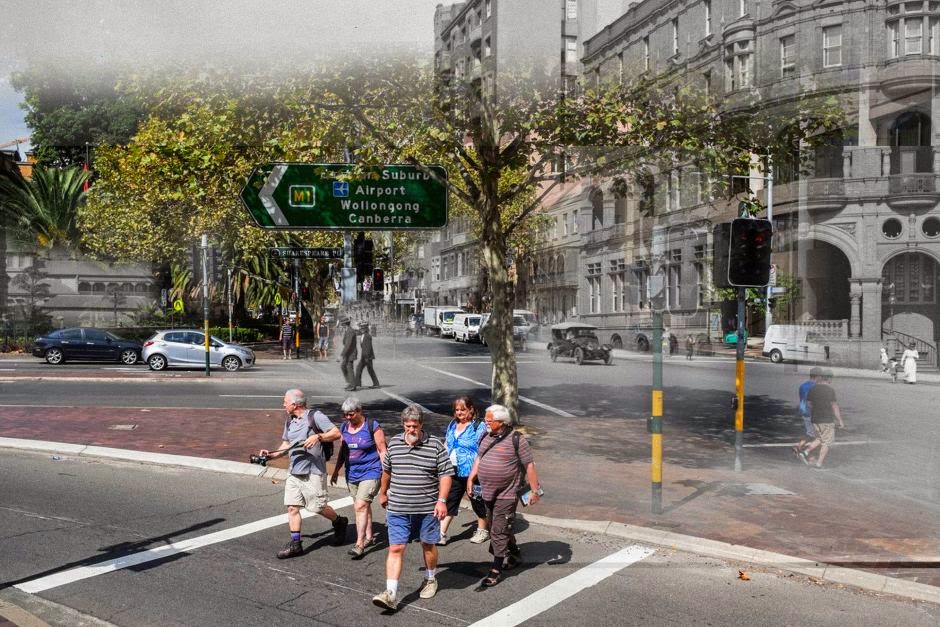 The view of Macquarie Street, Sydney retains many of its original features. The State Library, NSW Parliament, and town houses still remain although now are mostly obscured by trees which hadn't been planted in 1914. 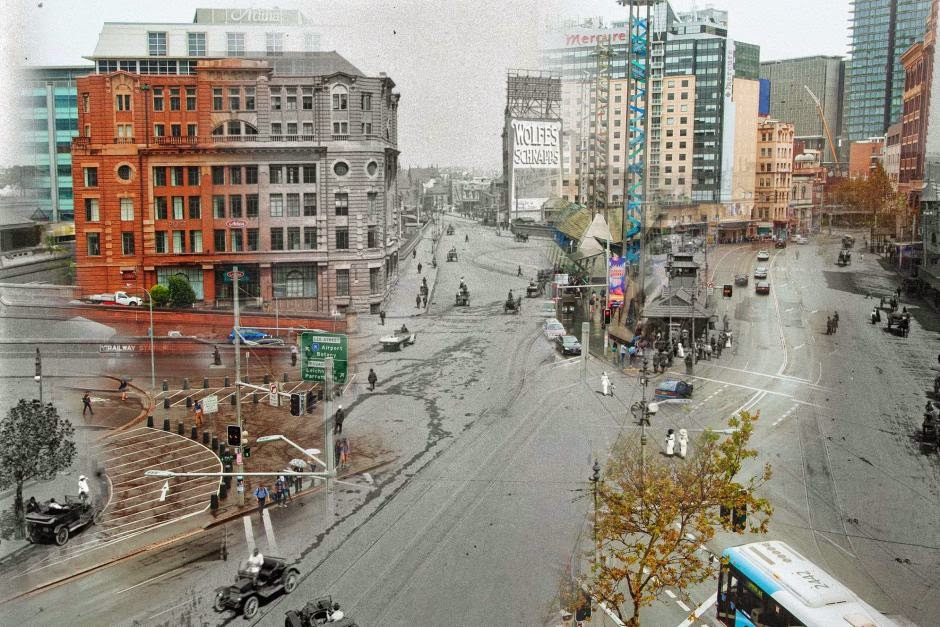 Railway Square outside Central Station was a transport hub 100 years ago. The junction of Broadway, Lee Street, George Street and Pitt Street shows little change other than the effects of population growth and the urbanisation of Australia which took hold after WW1. 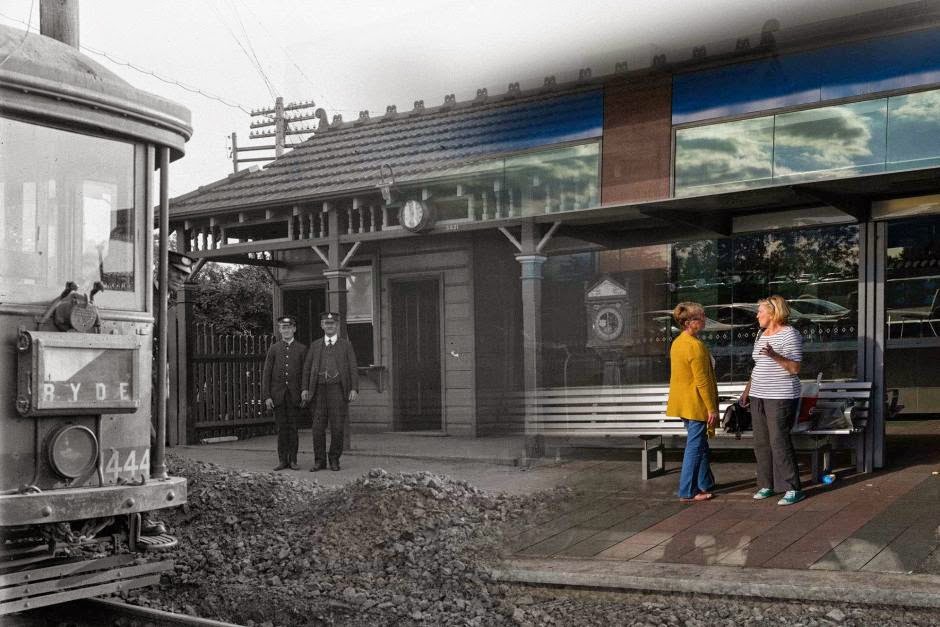 Top Ryde terminus has seen trams give way to buses as the once-outer suburb has become its own busy metropolis. 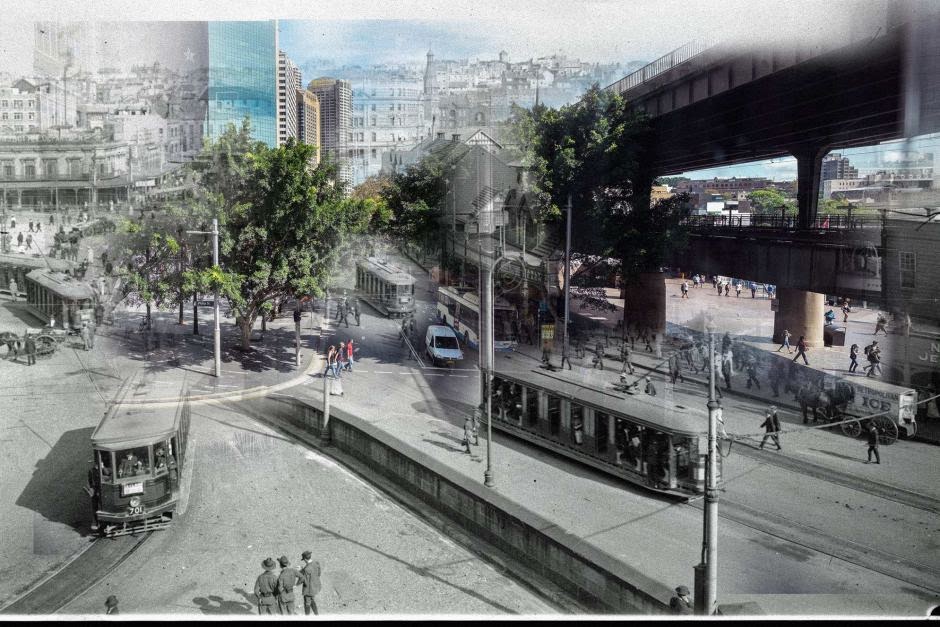 Alfred Street, Circular Quay, as seen from the First And Last Hotel, is barely recognisable from the treeless plain leading to the ferry terminals with clear views through to The Rocks of 1914, compared to the tree lined street hemmed by the Cahill Expressway of today. 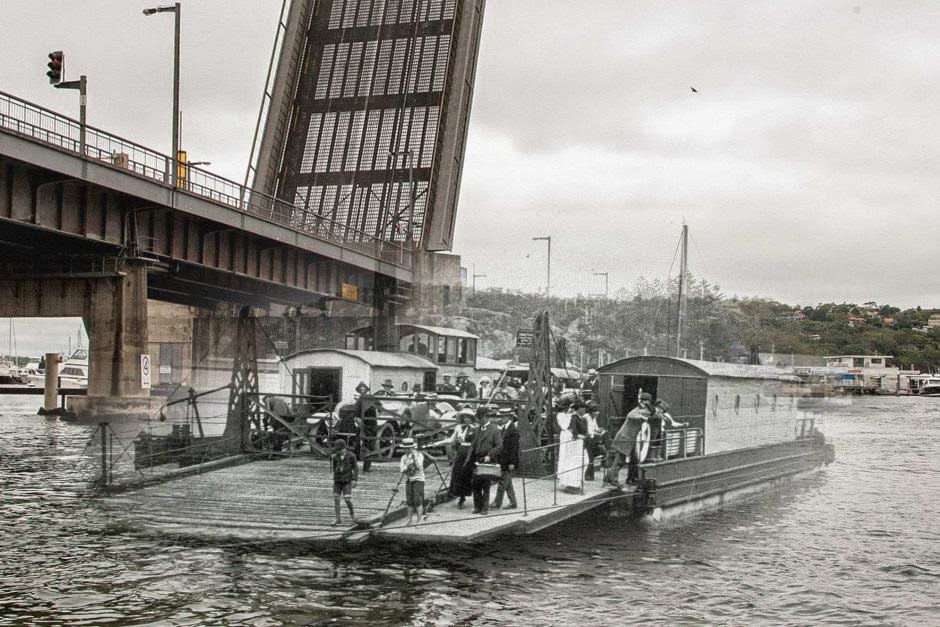 In 1914 the crowded Spit Punt was the only link from North Sydney to Manly. The hills of The Spit were undeveloped bush land, and a bridge to isolated Seaforth was unimaginable. 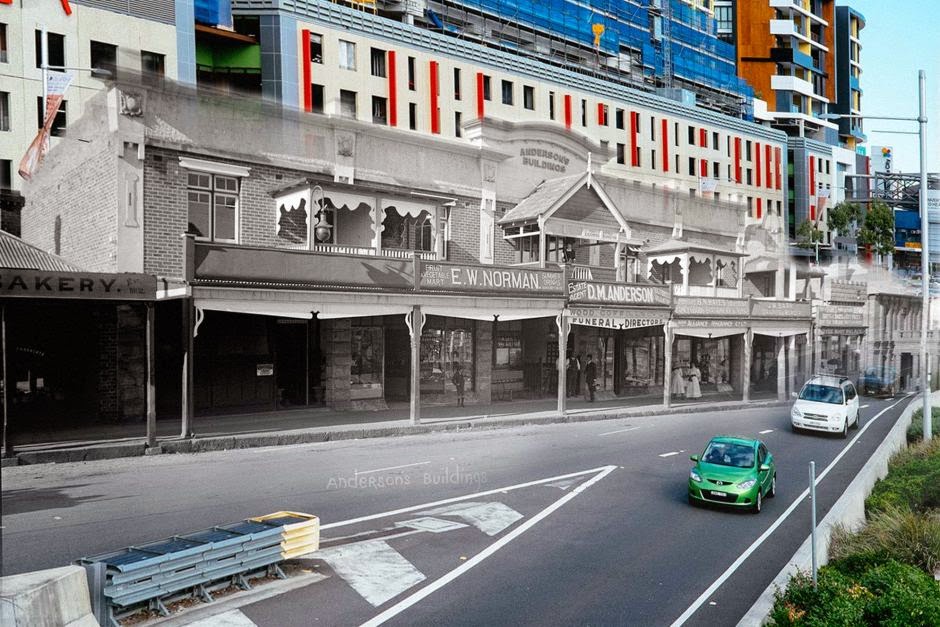 Nothing remains of the Anderson's Buildings in Top Ryde. D.M. Anderson was a local estate agent, councillor and Mayor of Ryde. Originally on Devlin Street, the shops have been replaced by the massive Top Ryde City Shopping Centre.