From the Vault - The Dead Jockey, The Blind Rower,

Writing a few days ago about the blind engineer who would go out in a row boat with his son to assist in designing and testing his invention of the pile screw, reminded me of a poem I had posted on Bytes some time ago.  I looked it up and found that although posted in 2010, I had reposted it in May 2018 in connection with another item.

By age 35, jockey Frank Hayes (1888-1923) had still never won a race. Truth be, he was a jockey second. a horse trainer and stableman first. In 1923 he agreed to ride a horse, Sweet Kiss, a 20 to 1 outsider, in a steeplechase at Belmont Park. Somewhere around the halfway mark, Hayes had a heart attack and died in the saddle. What is amazing, is that he didn’t fall off. Sweet Kiss kept running and Hayes kept riding, eventually crossing the finishing line and winning by a head. Hayes, still astride his mount, is the only jockey known to have won a race after death. It was only after the horse’s owners and race officials came up to Hayes, still sitting in the saddle, to congratulate him that they found out that he was dead. His first win and he didn’t know it. The horse never raced again and was nicknamed "Sweet Kiss of Death" for the rest of her life. 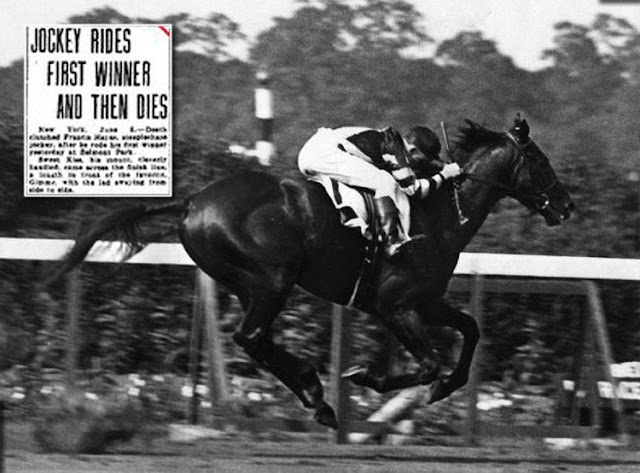 And since he rowed his father home,
His hand has never touched an oar.
All day he wanders on the shore,
And hearkens to the swishing foam.
Though blind from birth, he still could row
As well as any lad with sight;
And knew strange things that none may know
Save those who live without the light.

When they put out that Summer eve
To sink the lobster-pots at sea,
The sun was crimson in the sky;
And not a breath was in the sky;
The brooding, thunder-laden sky,
That, heavily and wearily,
Weighed down upon the waveless sea
That scarcely seamed to heave.

The pots were safely sunk; and then
The father gave the word for home:
He took the tiller in his hand,
And, in hi s heart already home,
He brought her nose round towards the land,
To steer her straight for home.

He never spoke,
Nor stirred again:
A sudden stroke,
And he lay dead,
With staring eyes, and lips of lead.

The son rowed on, and nothing feared:
And sometimes, merrily,
He lifted up his voice, and sang,
Both high and low,
And loud and sweet:
For he was ever gay at sea,
And ever glad to row,
And rowed as only blind men row:
And little did the blind lad know
That death was at his feet:
For still he thought his father steered;
Nor knew that he was all alone
With death upon the open sea.
So merrily, he rowed, and sang:
And, strangely on the silence rang
That lonely melody,
As, through the livid, brooding gloam,
By rock and reef, he rowed for home--
The blind man rowed the dead man home.

But, as they neared the shore,
He rested on his oar:
And, wondering that his father kept
So very quiet in the stern,
He laughed, and asked him if he slept;
And vowed he heard him snore just now.
Though, when his father spoke no word,
A sudden fear upon him came:
And, crying on his father's name,
With flinching heart, he heard
The water lapping on the shore;
And all his blood ran cold, to feel
The shingle grate beneath the keel:
And stretching over towards the stern,
His knuckle touched the dead man's brow.

But help was near at hand;
And safe he came to land:
Though none has ever known
How he rowed in, alone,
And never touched a reef.
Some say they saw the dead man steer--
The dead man steer the blind man home--
Though, when they found him dead,
His hand was cold as lead.

So, ever restless, to and fro,
In every sort of weather,
The blind lad wanders on the shore,
And hearkens to the foam.
His hand has never touched an oar,
Since they came home together--
The blind, who rowed his father home--
The dead who steered his blind son home.