Some years ago I posted a list and commentary of my Top Ten Plus Two, a list of my favourite films. I had to make the list + 2 in that I was unable to decide which two to drop to reduce the list to ten. My selection was not necessarily based on artistic merit, there are numerous films - 8½, Citizen Kane, Good Will Hunting – which are artistically acclaimed and yet don’t inspire me to watch them more than once, sometimes twice. There are others that I watch and rewatch every now and then and that is the basis of my selection. Feel free to disagree but my criterion for this list (and ones that will follow) is “films that I like, that I find entertaining and that I like to rewatch”. 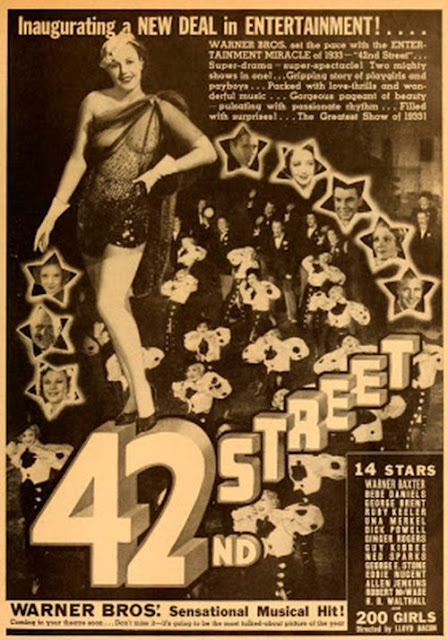 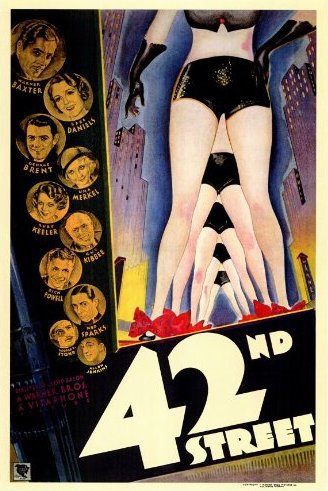 Yes, a 1933 film is in my list, maybe it should even have been in the Top 10 + 2 and I could have renamed it Top 10 + 3. A thoroughly entertaining film that features Ruby Keeler (once Mrs Al Jolson, as depicted in The Jolson Story) in her film debut, Warner Baxter, Dick Powell and Ginger Rogers, with memorable songs and Busby Berkeley’s amazing choreography. Today you wouldn’t expect to hear a song called “You’re Getting to be a Habit with Me” with love expressed in drug terms:

A great finale based on the song 42nd Street with a lot of dancing and singing that remains very watchable, even after 86 years! Keep an eye out for the sexual references (“She only said ‘No’ once, and THEN she didn't hear the question!”) and images, such as the camera angles in the choreography as indicated in the above posters. 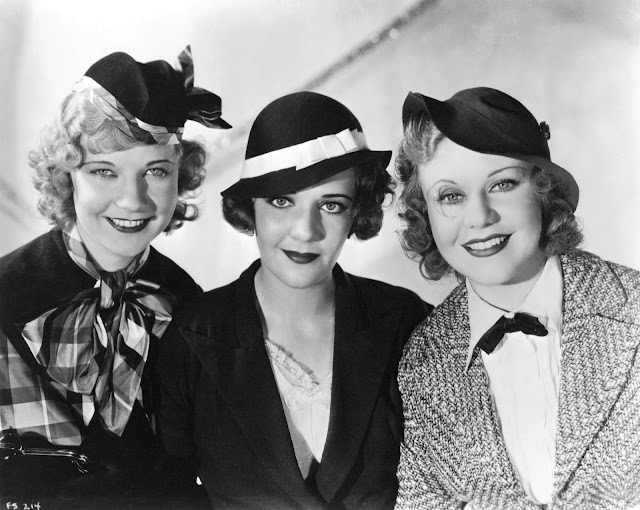 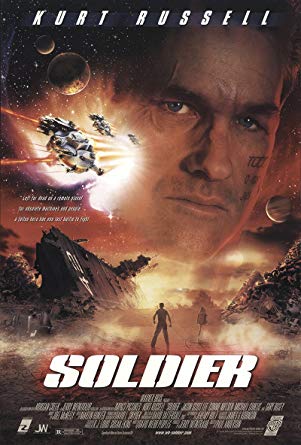 I like a good sci-fi and I like this film, even if it was a box office flop and received negative reviews on release. Okay, so Kurt Russell, playing the main character of this movie, Sgt Todd, is on-screen over 85 percent of the time, but only speaks a total of 104 words. How appropriate is that for Kurt? The film also raises some relevant issues of genetic selection and engineering, desensitisation of people (especially soldiers), and obsolescence, not that it needs relevance because it is a rollicking good action film in a sci fi context. David Webb Peoples, writer and editor, known for Unforgiven (1992), Blade Runner (1982) and Twelve Monkeys (1995), wrote Soldier and has described it as a “side-quel” to Blade Runner in that it takes place in the same universe as that film.  Having written this, I am inspired to watch it again tonight.

Note the references to such items as Cash Medal of Bravery, Plissken Patch, Shoulder of Orion battle, 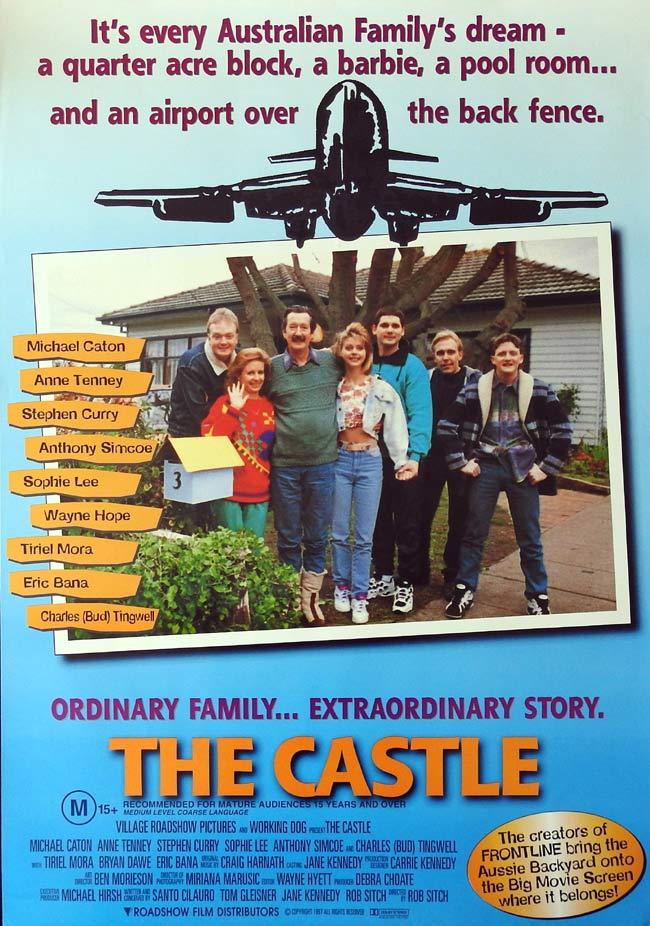 If you haven’t yet seen this 20 year old Oz flick, get hold of it somehow and watch it immediately. The film took five weeks to make from beginning to end – it was written in two weeks, shot in eleven days and taken to rough cut in two weeks. It was filmed on a budget of approximately A$750,000 and the shooting schedule was cut from 20 to 11 days, the number of days the filmmakers could afford to feed the cast and crew. That is not the reason for watching it. The film is an entertaining look at Australian suburbia and of an ordinary man standing up against corporate and government bullies, incorporating themes of law, courts, Mabo, the Constitution, family and justice. How can you not admire a film that has contributed such gems to the local idiom as:

· “If there's anything Dad loved more than serenity, it was a big two stroke engine on full throttle!”

· “This is going straight to the pool room.”

To save money, the family in the film was named Kerrigan so the filmmakers could borrow trucks from an actual tow-truck company, Kerrigan's Towing.
________________ 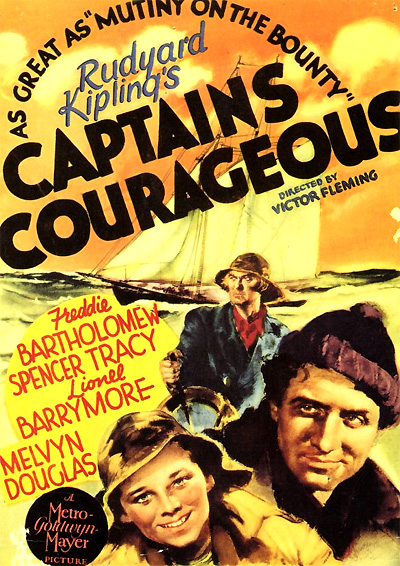 A film does not need to be modern, have lots of special effects and computer generated imagery and a mega-budget to be ranked as Top Ten, in my list at least. Here is another that is from way back, 82 years back, to be precise. Not only a great cast – Spencer Tracey, Freddie Bartholomew, Lionel Barrymore, Mickey Rooney – and a great story, it has superb photography of fishing off the Grand Banks and fishing schooners under full sail. From a story by Rudyard Kipling, it is one of the best coming of age films made, against an S background: sea, storm, ships, suspense and struggle. Superb. 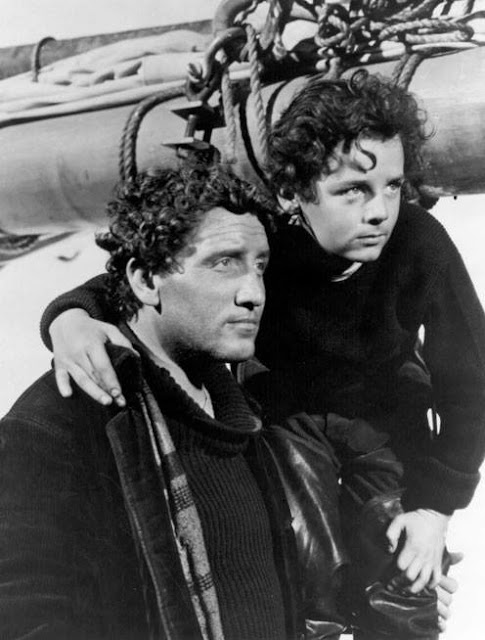 BTW:
Spencer Tracy initially turned down the role of Manuel because he thought it was too secondary to the boy. He did not attempt a Portuguese accent but instead based his accent for the film on a Yiddish voice he had used during an early theatre performance. He initially hated his performance in the movie until it won him good reviews and an Oscar nomination, picking up the Best Actor statue in 1938 for this role.
________________ 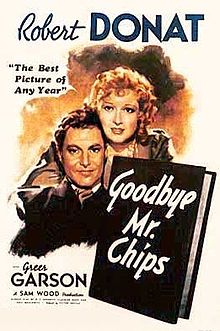 1939 was a bumper year for great films, so much so that the nominees for Best Pic that year were Dark Victory, Gone with the Wind, Goodbye, Mr. Chips, Love Affair. Mr. Smith Goes to Washington, Ninotchka, Of Mice and Men, Stagecoach, The Wizard of Oz and Wuthering Heights. The envelope please . . . and the best pic was GWTW, though Robert Donat got the gong for Best Actor. To paraphrase philosopher Mr John Denver, some years are diamond, some years are stone when it comes to Oscars.

It raises another interesting aspect about Hollywood and films: Why do remakes of classics and end up with a dog’s breakfast of a result? If it ain’t broke, don’t fix it. Cases in point: 12 Angry Men, Rollerball, Psycho, Pink Panther, Goodbye Mr Chips. . . Do NOT watch the 1969 Peter O’Toole version, it is terrible when compared to the original, even if the original is 80 years old. And they turned it into a musical! I haven’t seen the 2002 Marin Clunes (Doc Martin) version.

If you can get hold of a copy or check Netflix etc, you won’t be disappointed. 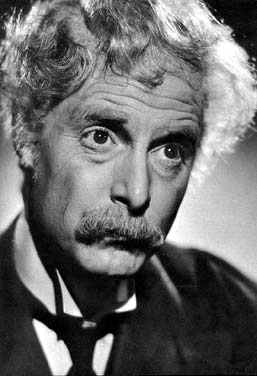 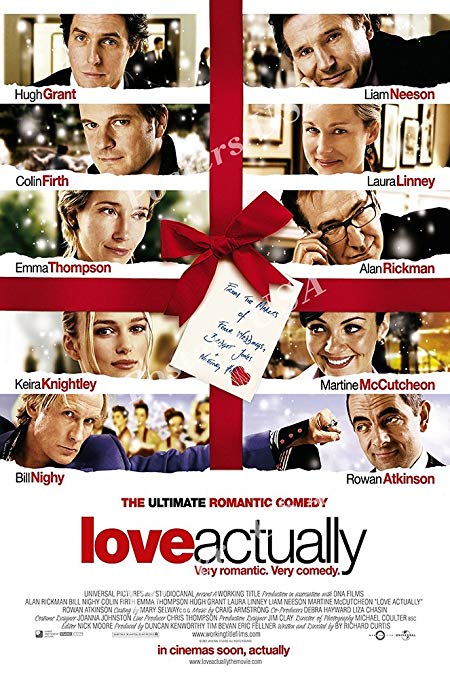 Ten stories about ten people, linked and intertwined, that make up a film that I never tire of watching at Christmas, along with Holiday Inn and White Christmas. Great cast, great stories . . . Billy Mack and Joe, Jamie and Aurelia, Daniel and Natalie . . . recalling those stories makes me want to dust it off and watch it again now instead of waiting for Christmas.

I will share a story with you. At Christmas we usually give a gift to family and friends of a bottle of wine and a DVD, the idea being that the recipients can relax over the holiday by watching the film and having a vino. I am conscious that the film might be watched as a family, with children, but for some reason when I gave Love Actually a few years ago I forgot all about the simulated sex scenes for John and Judy, the body doubles used for taking light meter readings etc on porn sets. John and Judy are perfectly comfortable being naked and simulating sex on-set but are shy and tentative off-set. These days I make sure that there are no inappropriate scenes in the gifted DVDs.

Buttered, syrupy corn or a study of people and situations with wider implications? Who cares, just watch it and enjoy it! 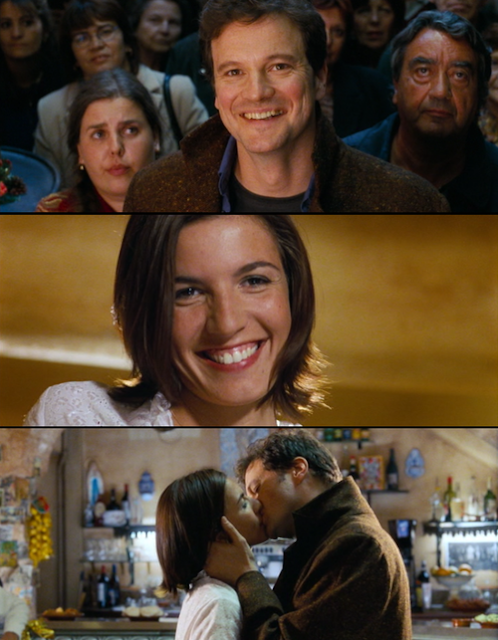 One of my favourite stories in Love Actually

“Whenever I get gloomy with the state of the world, I think about the arrivals gate at Heathrow Airport. General opinion's starting to make out that we live in a world of hatred and greed, but I don't see that. It seems to me that love is everywhere. Often, it's not particularly dignified or newsworthy, but it's always there - fathers and sons, mothers and daughters, husbands and wives, boyfriends, girlfriends, old friends. When the planes hit the Twin Towers, as far as I know, none of the phone calls from the people on board were messages of hate or revenge - they were all messages of love. If you look for it, I've got a sneaky feeling you'll find that love actually is all around.”