OPW continued: They Walk Among Us and They Breed

Today’s contribution is from Michael J, who sent links to the items below. Those items illustrate the truth of a statement attributed to Albert Einstein but unlikely to have been said by him: 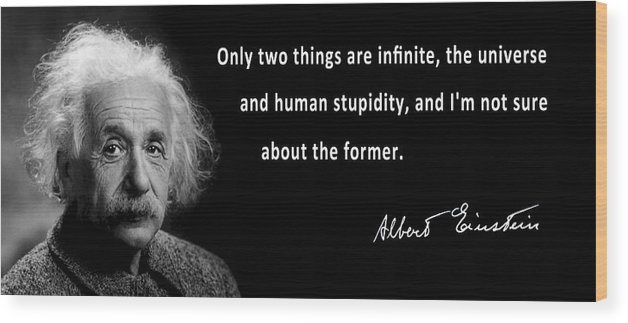 My daughter and I went through the McDonald's driveway window and I gave the cashier a $5 bill.
Our total was $4.25, so I also handed her 25c.
She said, 'you ...gave me too much money.'
I said, 'Yes I know, but this way you can just give me a dollar coin back.'
She sighed and went to get the manager who asked me to repeat my request.
I did so, and he handed me back the 25c, and said 'We're sorry but we don’t do that kind of thing.'
The cashier then proceeded to give me back 75 cents in change.
Do not confuse the people at MacD's.

We had to have the garage door repaired.
The repairman told us that one of our problems was that we did not have a 'large' enough motor on the opener.
I thought for a minute, and said that we had the largest one made at that time, a 1/2 horsepower.
He shook his head and said, 'You need a 1/4 horsepower.'
I responded that 1/2 was larger than 1/4 and he said, 'NOOO, it's not. Four is larger than two.'
We haven't used that repairman since...

I live in a semi rural area.
We recently had a new neighbor call the local city council office to request the removal of the DEAR CROSSING sign on our road.
The reason: 'Too many dears are being hit by cars out here! I don't think this is a good place for them to be crossing anymore.'

IDIOT SIGHTING IN FOOD SERVICE.
My daughter went to a Mexican fast food and ordered a taco.
She asked the person behind the counter for 'minimal lettuce.'
He said he was sorry, but they only had iceberg lettuce.

I was at the airport, checking in at the gate when an airport employee asked,
'Has anyone put anything in your baggage without your knowledge?'
To which I replied, 'If it was without my knowledge, how would I know?'
He smiled knowingly and nodded, 'That's why we ask.'

The pedestrian light on the corner beeps when it's safe to cross the street.
I was crossing with an 'intellectually challenged' co-worker of mine.
She asked if I knew what the beeper was for.
I explained that it signals blind people when the light is red.
Appalled, she responded, 'what on earth are blind people doing driving?!'
She is a government employee.....

When my husband and I arrived at a car dealership to pick up our car after a service, we were told the keys had been locked in it.
We went to the service department and found a mechanic working feverishly to unlock the driver’s side door.
As I watched from the passenger side, I instinctively tried the door handle and discovered that it was unlocked.
‘Hey,' I announced to the technician, 'its open!'
His reply, 'I know. I already did that side.
____________

Thomas Cook Holidays listing some of their UK genuine complaints.

"I think it should be explained in the brochure that the local store in Indian villages does not sell proper biscuits like custard creams or ginger nuts."

"It's lazy of the local shopkeepers to close in the afternoons. I often needed to buy things during 'siesta' time -- this should be banned."

"On my holiday to Goa in India , I was disgusted to find that almost every restaurant served curry. I don't like spicy food at all."

"We booked an excursion to a water park but no-one told us we had to bring our swimming costumes and towels."

"The beach was too sandy."

"We found the sand was not like the sand in the brochure. Your brochure shows the sand as yellow but it was white."

"Topless sunbathing on the beach should be banned. The holiday was ruined as my husband spent all day looking at other women."

"No-one told us there would be fish in the sea. The children were startled."

"There was no egg-slicer in the apartment."

"We went on holiday to Spain and had a problem with the taxi drivers as they were all Spanish."

"The roads were uneven.."

"It took us nine hours to fly home from Jamaica to England . It took the Americans only three hours to get home."

"The brochure stated: 'No hairdressers at the accommodation'. We're trainee hairdressers -- will we be OK staying there?"

"There are too many Spanish people. The receptionist speaks Spanish. The food is Spanish. Too many foreigners now live abroad."

"We had to queue outside with no air-conditioning."

"It is your duty as a tour operator to advise us of noisy or unruly guests before we travel."

"I was bitten by a mosquito. No-one said they could bite."

"My fiancé and I booked a twin-bedded room but we were placed in a double-bedded room. We now hold you responsible for the fact that I find myself pregnant. This would not have happened if you had put us in the room that we booked."