You're traveling through another dimension, a dimension not only of sight and sound but of mind. A journey into a wondrous land whose boundaries are that of imagination. That's the signpost up ahead - your next stop, the Twilight Zone!

Okay, you’re not in the Twilight Zone but you may feel that you are after you read the next few news items from the last few days.
____________

One Cilla Carden from Perth, Western Australia, was suck of her neighbour, Toan Vu and his wife and kids, barbequeing fish and meat in their backyard. She felt that the smell was intolerable and, prevented her having the use and enjoyment of her own backyard. She further felt that they did it deliberately to annoy her.

“They’ve put it there so I smell fish, all I can smell is fish … I can’t go out there.”

She did what any self respecting anti-fish sniffer would have done, ashe sought orders against her neighbours in a tribunal, but the case was tossed out for lack of evidence. She was also turned down by the Western Australian Supreme Court when she appealed.

Despite the fact that Mr Vu moved the barbeque and stopped his children playing basketball when she also complained about that noise, Ms Carden has vowed to continue the fight through the courts.

In response, a Facebook event has been created called “Community BBQ for Cilla Carden”, on which more than 2000 people have clicked attending and 6000 have indicated they are interested.

“Cilla Carden has a problem with her neighbours cooking meat on their BBQ, because she’s a vegan. Recently taking them to the Supreme Court. Don’t let Cilla destroy a good old Aussie tradition, join us for a community BBQ, and help Cilla Carden GET SOME PORK ON HER FORK. BYO hotdog buns,
p.s. NO VEGANS.”

- Bailey Mason, creator of the event

“Any person who seeks to attend Ms Carden’s property on Saturday October 19, 2019 or at any other time in relation to this event or matter will be referred to the WA police on the ground of trespass. Security cameras will be installed to obtain vision of any person attending the property and the vision will be provided to the police.” 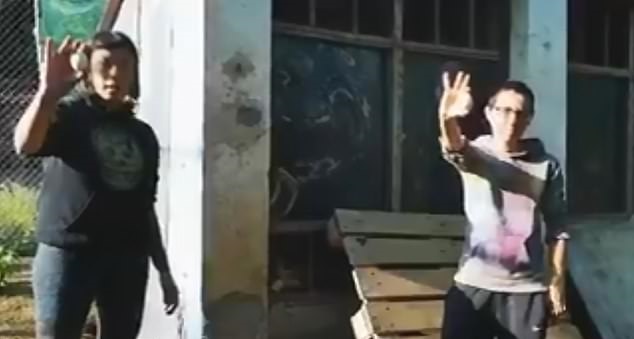 Two vegan activists in Spain have separated chickens from roosters because they 'don't want the hens to be raped'. The activists are from a Spanish vegan group Almas Veganas (Vegan Souls), based in Girona in the north-eastern Spanish region of Catalonia. They published a video on Twitter where it has been viewed 570,000 times. On their Twitter page, the activists describe themselves as 'anti-speciesist' and 'transfeminist.' They also smashed eggs on the ground because 'they belong to the hens.'

Henceforth the roosters will need to respect the issue of consent and think about a dinner and flowers first.

Nashville-area Catholic school banned the Harry Potter books for their depiction of “actual curses and spells”,

Reverend Dan Reehil, a pastor at St. Edward Catholic School, decided to ban the Harry Potter series from the school library, without input from teachers, school administrators, or parents.

In an email to faculty, Reehil wrote, “The curses and spells used in the books are actual curses and spells; which when read by a human being risk conjuring evil spirits into the presence of the person reading the text,” after conferring with exorcism experts on the matter.

Parents of St. Edward’s students submitted a letter objecting to the library’s removal of Harry Potter, but there is little legal ground for them to have the series reinstated because it is a private school, according to Deborah Caldwell-Stone, interim director of the American Library Association (ALA) office for intellectual freedom.

“Each pastor has canonical authority to make such decisions for his parish school. He’s well within his authority to act in that manner,” said Rebecca Hammel, school superintendent for Nashville’s Catholic diocese.

Deanna Adams, 40, of Nebraska, decided to give her bridal party free rein over their choice of outfit.

Luckily, Ms Adams has a sense of humour when her sister and maid of honour Christina Meador decided to turn up to the ceremony in an enormous, inflatable Tyrannosaurus rex costume. 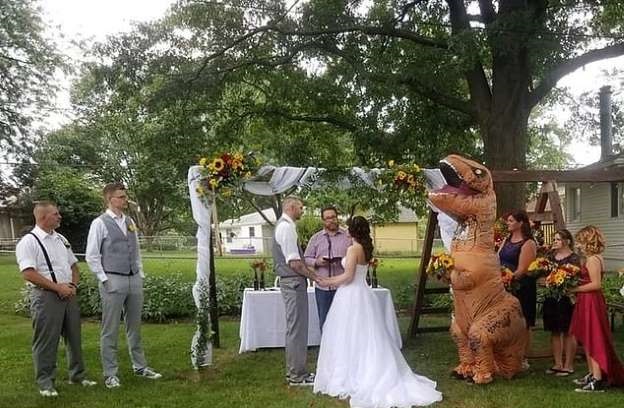 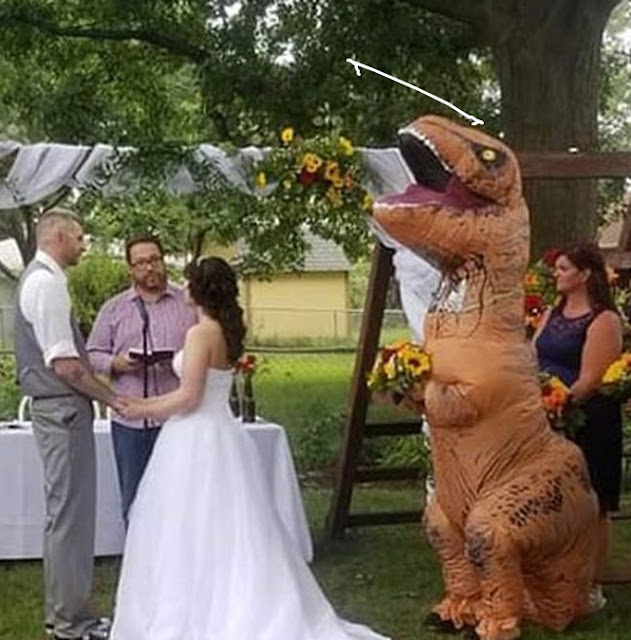