A woman at a truck stop at Gross Tete, about 20 minutes outside Baton Rouge in Louisiana, ended up in a barney with a camel named Caspar. The woman entered Caspar’s enclosure to retrieve her dog when Caspar sat down on her. She says that she did the only thing possible - in self defence she bit Caspar’s testicles.

Not so, said Deputy Sheriff Hamilton, the unidentified woman and her husband had provoked the camel before he sat on the woman. Furthermore:

- There were signs every3 metres warning people not to enter the enclosure, plus there was a barbed wire fence that the couple had to crawl under to gain entry.

- The couple admitted having been there before.

- Their dog had entered the camel’s enclosure because the husband had been throwing doggie treats under the fence into the enclosure.

- There had been no problems with Caspar before.

- The man shoved the camel in the enclosure and swatted it with his hat.

The couple was cited with a leash law violation for letting the dog run free on the private property, as well as criminal trespassing.

It reminds me of the following joke:

A Russian and an Irish wrestler were set to square off for the Olympic gold medal. Before the final match, the Irish wrestler's trainer came to him and said, "Now, don't forget all the research we've done on this Russian. He's never lost a match because of this 'pretzel' hold he has. It ties you up in knots. Whatever you do, do not let him get you in that hold! If he does, you're finished."

The Irishman nodded in acknowledgment. As the match started, the Irishman and the Russian circled each other several times, looking for an opening. All of a sudden, the Russian lunged forward, grabbing the Irishman and wrapping him up in the dreaded pretzel hold. A sigh of disappointment arose from the crowd and the trainer buried his face in his hands, for he knew all was lost. He couldn't watch the inevitable happen.

Suddenly, there was a Long, High Pitched Scream, then a cheer from the crowd and the trainer raised his eyes just in time to watch the Russian go flying up in the air. His back hit the mat with a thud and the Irishman collapsed on top of him, making the pin and winning the match.

The trainer was astounded. When he finally got his wrestler alone, he asked, "How did you ever get out of that hold? No one has ever done it before!"

The wrestler answered, "Well, I was ready to give up when he got me in that hold but at the last moment, I opened my eyes and saw this pair of testicles right in front of my face. I had nothing to lose so with my last ounce of strength, I stretched out my neck and bit those babies just as hard as I could."

The trainer exclaimed, "Oh, so that's what finished him off?!!"

"Not really. You'd be amazed how strong you get when you bite your own balls."

Overseas readers may have heard it said that everything is bigger in Oz, as well as more deadly. Here is an example . . .

Snake catchers have caught a FBS (big snake) in Brisbane in Queensland. The snake, a 1.8m member of the imaginatively named red-bellied black snake, was described as “abnormally large”. 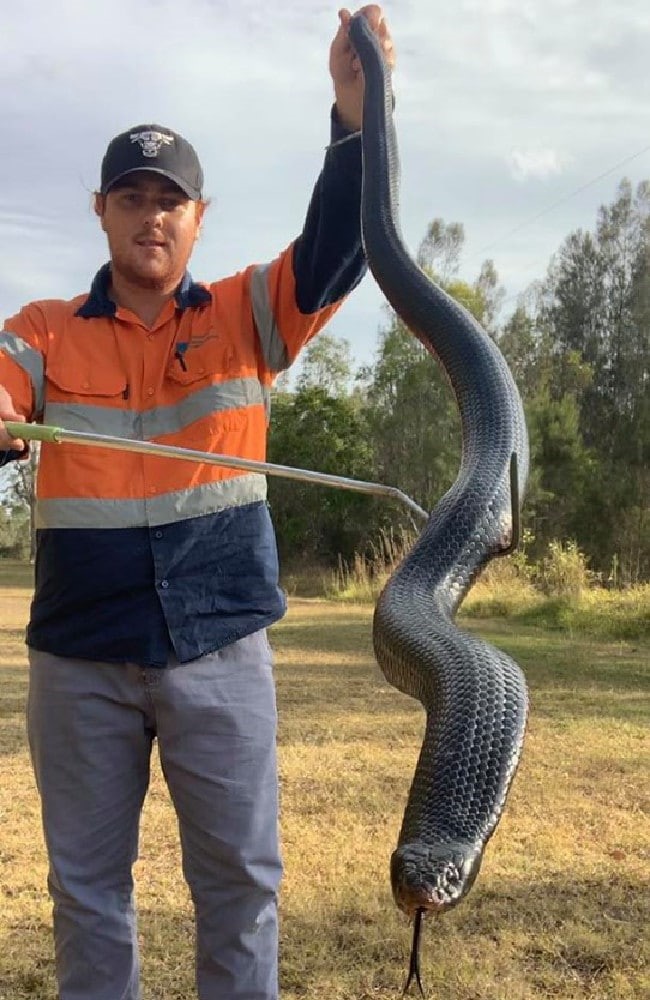 If that doesn’t freak you out, the following might . . .

New South Wales has been in a major drought since mid 2017. Nowhere is the FBD (big drought) more keenly felt than in the regional areas, a prime example being Dubbo, located 303km (188 miles) northwest of Sydney.

The situation is so dire in Dubbo that restrictions are being introduced to limit showers to 5 minutes and fines for wshing cars or watering gardens after midday. 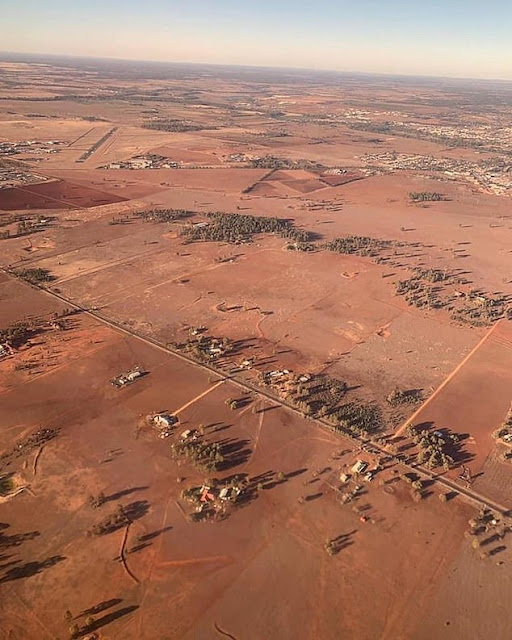 Dubbo from the air 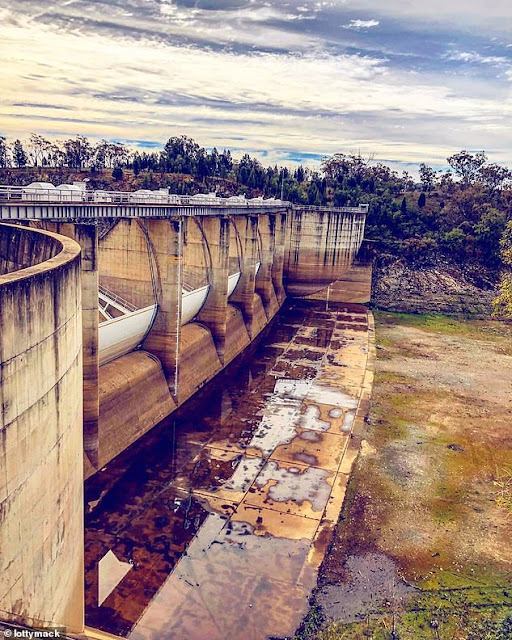 The Burrendong dam in the state's central west is at just 4.4 per cent capacity as 99 per cent of New South Wales suffers from one of the worst droughts in living memory. 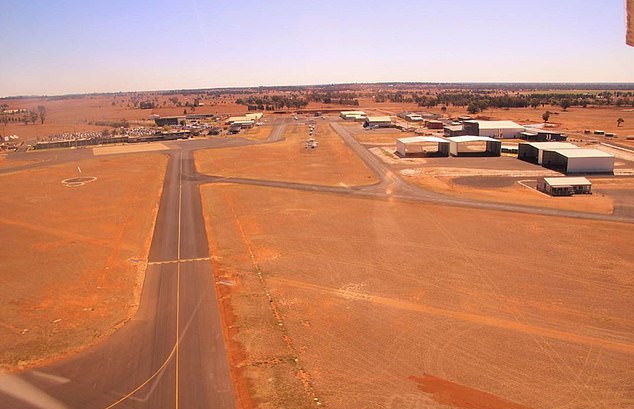 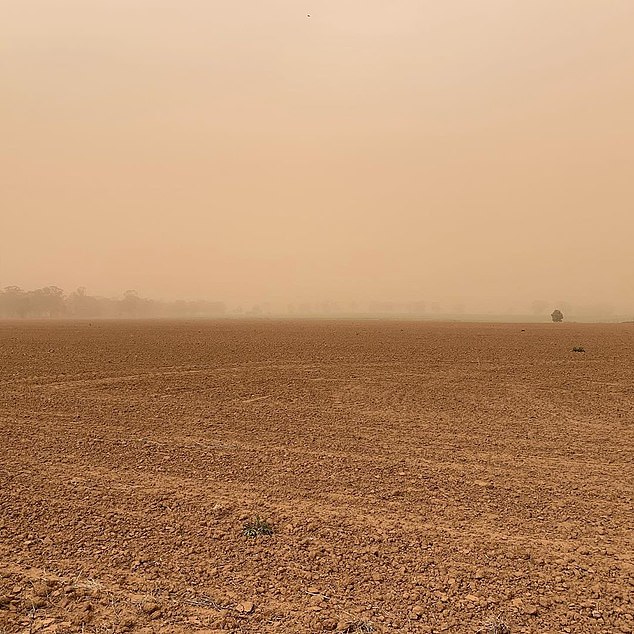 Dubbo (looks like the pics sent back by Mars Rover)

In what must be considered a FGI (great idea), Colorado police say a driver tried to replace a broken tail light with a red sports drink. Denver news station KMGH-TV reported that Longmont police stopped a driver who placed a red-colored bottled drink where his car's rear light should have been. Authorities say the driver was on his way to get the tail light fixed when officers stopped him in Longmont, 38 miles north of Denver. Officials say officers didn't ticket the driver, who was seen repairing his car later that day. Police say tail lights prevent crashes and "while we appreciate the ingenuity of this taillight, this is not a permanent solution." 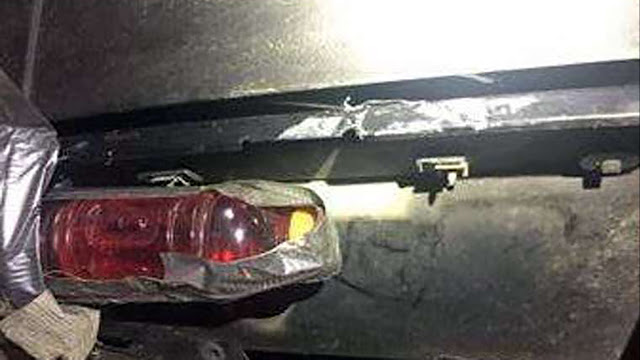 A driver came back to his car in Adelaide to find the rear covered by thousands of bees: 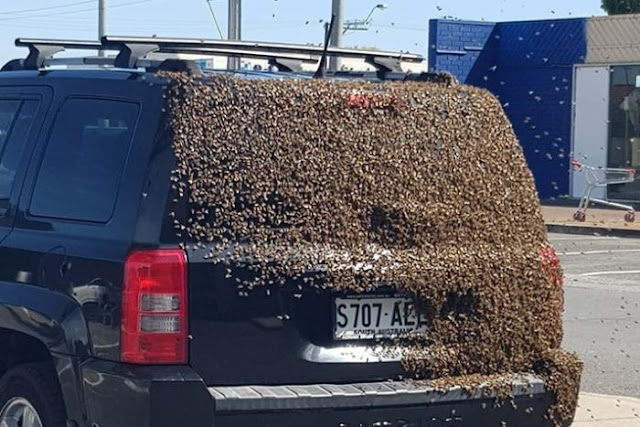 An apiarist commented that swarms of bees landing on cars in Adelaide were simply resting after gorging themselves on nectar before taking flight to create a new hive. Bee swarms will travel once their hive is overcrowded and travel 200–300 metres before resting. Spring is the time of year that bees are more active

South Australian Apiarists Association president Josh Kennett said "If you're in a bit of a hurry — if you're game enough, sweep them off into the gutter and then drive off.”