Byter Graham E sent me a lengthy commentary on “farting”: in popular culture, history, literature and more, in response to my post yesterday about some aspects of that topic.  Thanks Graham, you are certainly Master of the Fart.  However, to give readers a break from flatulence, I will post that next week.

My post on the study done of farting and the formula developed by the experts as to how to assess the funniest of the farts reminded me that it was time to have a look at this year’s Ig Nobel Prizes.  That post appears below. 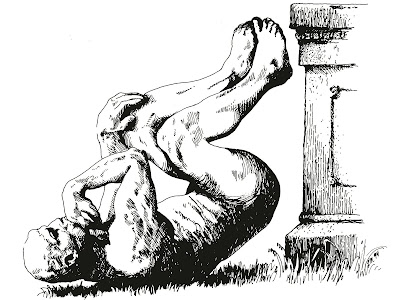 The Ig Nobel Prizes are satiric prizes awarded annually since 1991 to celebrate ten unusual or trivial achievements in scientific research, its stated aim being to "honour achievements that first make people laugh, and then make them think." The name of the award is a pun on the Nobel Prize, which it parodies, and the word ignoble. Organised by the scientific humour magazine Annals of Improbable Research (AIR), the Ig Nobel Prizes are presented by Nobel laureates in a ceremony at the Sanders Theatre,  Harvard University. 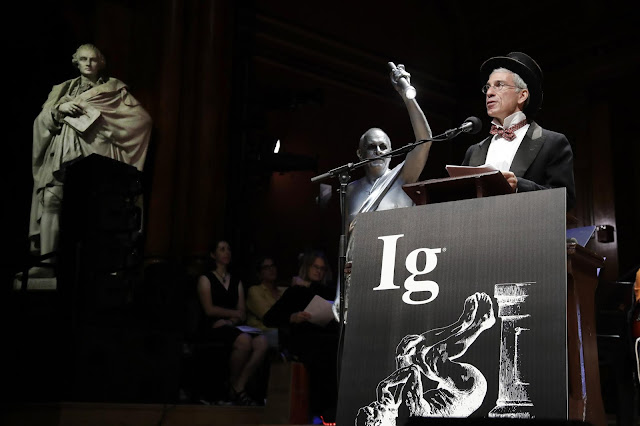 Following is a summary of the winners and winning studies.  Access the official site for links to the research:
https://www.improbable.com/ig-about/winners/#ig2019 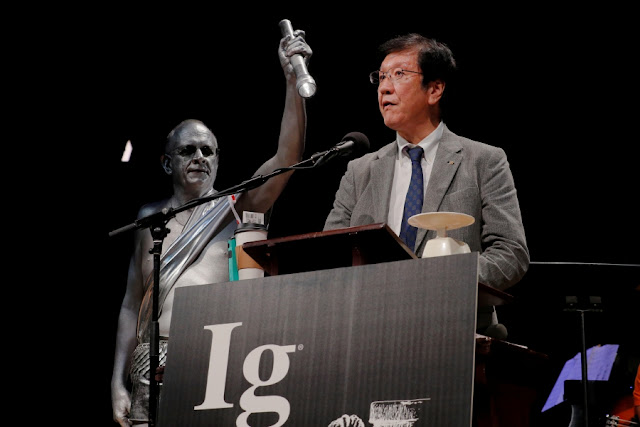 This year’s Chemistry Prize went to a team of pediatric dentists at Hokkaido University for determining how much saliva a 5-year-old produces. The study of 30 kindergartners showed that each generates about 500 mL of spit each day.

Engineering:
Iman Farahbakhsh, a mechanical engineering professor at Islamic Azad University, won the Engineering Prize for inventing a machine that changes babies’ diapers. The combination washer and diaper-changing apparatus “includes a main chamber, a glass window, a seat, a leg holder, a safety belt, a diaper removing arm, a sprinkler, and a dryer,” according to the 2018 patent. 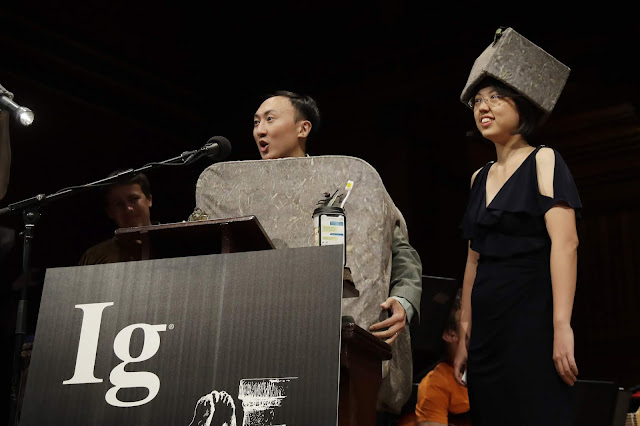 David Hu speaks as Patricia Yang, right, listens as they receive the Ig Nobel award in physics for studying how and why wombats make cubed poo.

The Physics Prize was awarded to a team that studied how and why wombats make cubed poo. The group reported its findings—that the irregular elasticity of wombats’ intestines leads to compact, cubed feces—at a meeting of the American Physical Society’s Division of Fluid Dynamics in 2018. It is the second Physics Ig Nobel for two members of the team, Patricia Yang and David Hu of the Georgia Institute of Technology, who shared the 2015 prize for determining it takes most mammals 21 s (plus or minus 13 s) to empty their bladders. 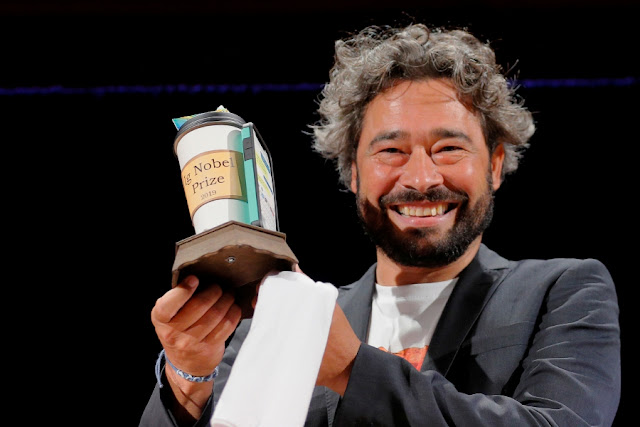 Silvano Gallus of Italy accepts the Ig Nobel Prize in Medicine for the study "Does Pizza Protect Against Cancer?"

Silvano Gallus, head of the Laboratory of Lifestyle Epidemiology at the Mario Negri Institute for Pharmacological Research, garnered the Medicine Prize “for collecting evidence that pizza might protect against illness and death, if the pizza is made and eaten in Italy”

Biology:
An international team claimed the Biology Prize for a study that determined there is a distinct difference in the magnetic properties of live and dead cockroaches

Anatomy:
Two human fertility researchers at the University of Toulouse earned the Anatomy Prize for “Thermal Asymmetry of the Human Scrotum,” their study of postal workers and bus drivers. One of the winners, Roger Mieusset, also invented heated underwear for men, purportedly for contraception. 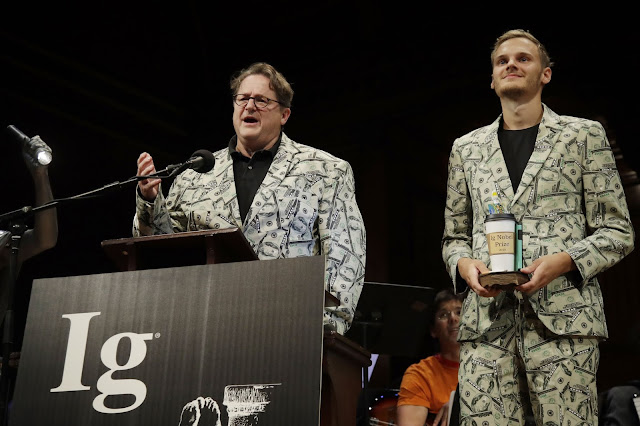 Andreas Voss, left, and his son Timothy Voss, of The Netherlands, receive the Ig Nobel award in economics for testing which country's paper money is best at transmitting dangerous bacteria.

Peace:
For their study “The Pleasurability of Scratching an Itch: A Psychophysical and Topographical Assessment,” five dermatologists, a psychologist, and a biostatistician won the Peace Prize

The following article is from the website Metal Floss at:
http://mentalfloss.com/article/600249/2019-ig-nobel-prize-winners

Each September, the Ig Nobel Prizes (a play on the word ignoble) are given out to scientists who have wowed the world with their eccentric, imaginative achievements. Though the experiments are usually scientifically sound and the results are sometimes truly illuminating, that doesn’t make them any less hilarious. From postal workers’ scrotal temperatures to cube-shaped poop, here are our top five takeaways from this year’s award-winning studies.

1. LEFT AND RIGHT SCROTA OFTEN DIFFER IN TEMPERATURE, WHETHER YOU’RE NAKED OR NOT.
Roger Mieusset and Bourras Bengoudifa were awarded the anatomy prize for testing the scrotum temperatures in clothed and naked men in various positions. They found that in some postal workers, bus drivers, and other clothed civilians, the left scrotum is warmer than the right, while in some naked civilians, the opposite is true. They suggest that this discrepancy may contribute to asymmetry in the shape and size of male external genitalia.

2. 5-YEAR-OLD CHILDREN PRODUCE ABOUT HALF A LITER OF SALIVA PER DAY.
Shigeru Watanabe and his team nabbed the chemistry prize for tracking the eating and sleeping habits of 15 boys and 15 girls to discover that, regardless of gender, they each produce about 500 milliliters of spit per day. Children have lower salivary flow rates than adults, and they also sleep longer (we produce virtually no saliva when we sleep), so it seems like they may generate much less saliva than adults. However, since children also spend more time eating than adults (when the most saliva is produced), the average daily levels are about even—at least, according to one of Watanabe’s previous studies on adult saliva.

3. SCRATCHING AN ANKLE ITCH FEELS EVEN BETTER THAN SCRATCHING OTHER ITCHES.
Ghada A. bin Saif, A.D.P. Papoiu, and their colleagues used cowhage (a plant known to make people itchy) to induce itches on the forearms, ankles, and backs of 18 participants, whom they then asked to rate both the intensity of the itch and the pleasure derived from scratching it. Subjects felt ankle and back itches more intensely than those on their forearms, and they also rated ankle and back scratches higher on the pleasure scale. While pleasure levels dropped off for back and forearm itches as they were scratched, the same wasn’t true for ankle itches—participants still rated pleasurability higher even while the itchy feeling subsided. Perhaps because there’s no peace quite like that of scratching a good itch, the scientists won the Ig Nobel peace prize for their work.

4. ELASTIC INTESTINES HELP WOMBATS CREATE THEIR FAMOUS CUBED POOP.
In the final 8 percent of a wombat’s intestine, feces transform from a liquid-like state into a series of small, solid cubes. Patricia Yang, David Hu, and their team inflated the intestines of two dead wombats with long balloons to discover that this formation is caused by the elastic quality of the intestinal wall, which stretches at certain angles to form cubes. For solving the mystery, Yang and Hu took home the physics award for the second time—they also won in 2015 for testing the theory that all mammals can empty their bladders in about 21 seconds.

5. ROMANIAN MONEY GROWS BACTERIA BETTER THAN OTHER MONEY.
Habip Gedik and father-and-son pair Timothy and Andreas Voss earned the economics prize by growing drug-resistant bacteria on the euro, U.S. dollar, Canadian dollar, Croatian luna, Romanian leu, Moroccan dirham, and Indian rupee. The Romanian leu was the only one to yield all three types of bacteria tested—Staphylococcus aureus, Escherichia coli, and Vancomycin-resistant Enterococci. The Croatian luna produced none, and the other banknotes each produced one. The results suggest that the Romanian leu was most susceptible to bacteria growth because it was the only banknote in the experiment made from polymers rather than textile-based fibers.

Winners received $10 trillion Zimbabwean dollars, which is virtually worthless, and each was given one minute to deliver an acceptance speech enforced by an 8-year-old girl whining "Please stop. I'm bored." 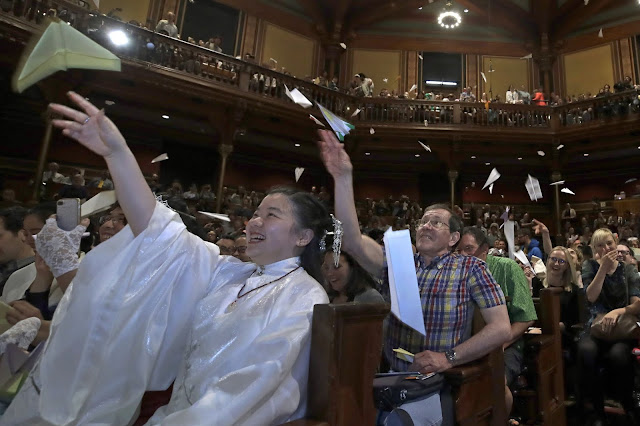 Final thought:
Perhaps the farting study may be part of the 2020 awards.

Posted by BytesMaster at 3:02 AM