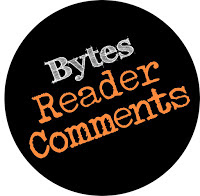 Email from David C B of Derbyshire, England in response to yesterday’s Bytes and Pieces:

The blind engineer Alexander Mitchell reminds me of another blind engineer. John Metcalfe known as "Blind jack of Knaresborough", Knarseborough being a town in Yorkshire.
Despite being blind from the age of six Jack became the first professional road builder to emerge during the Industrial Revolution, building almost 300km of roads.

And "The Women who Found Herself" puts me in mind of another story taught as an object lesson in mountain rescue. A certain gentleman, let us call him Sir John, went from London for a few days walking on the Yorkshire fells. He was called away on urgent business to Scotland for several days and when he failed to return to London his housekeeper contacted the police. This led to a large search party in Yorkshire. Returning south Sir John joined the search party. It is said that on the top of the highest fell Sir John enquired of his nearest searcher "Just who are we looking for?" 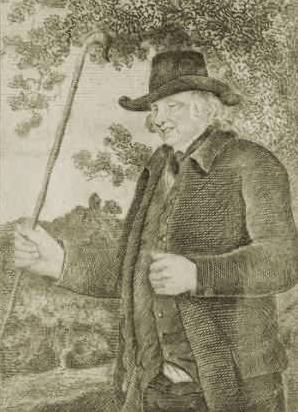 An email from Steve M taking me to task for my list of my Second Top 10 + 2 films:

Friend, mentor, lawyer, and the man I wish I could be... are you deliberately provoking me with that crap list of films of yours? You are in dire need of an education as far as the silver screen is concerned. Check these out matey!

What about: Midnight Cowboy, Green Book, Bohemian Rhapsody, Secrets and Lies, The Station Agent, The Well Diggers Daughter, Blue Jasmine, The Butler, Twelve Year a Slave, Meet (Joe Black for entertainment value only) The Social Network, Secretary, To Kill A Mockingbird, I Tonia, An Education, Gods and Monsters, The Elephant Man, City of Gold, Veronica Guren, Django Unchained, Inglorious Bastards, Lobster, Get the Gringo, The Graduate, ONR Hour PHOTO, The Wife, The Cook, The Thief and the Lover, Misery, The Birds, No Country For Old Men, Once Were Warriors, Once Upon A Time In Hollywood, Gallipoli, My Left Foot, Babel, The Counterfeiters, Mississippi Burning, Dead Man Walking, The Boy in Striped Pyjamas, Monsieur Ibrahim, Milk, Life is Beautiful, 1915, The Judge, Ten Canoes, Noise, Tom White, Jindabyne, The Gathering Storm, The Great Escape, The Help, Green Mile, Guess Who’s Coming to Dinner.

Humour: Any of the Austin Powers films, Cone Heads, Any Monty Python film, of course! any Borat film, Never Again, Blazing Saddles, The Plank, The Man With Two Brains, A Million Ways to Die in the West. I am only just beginning!

The above have it all; Academy Award Winners, Bafta’s, some of the best writing you will ever see and some pretty hefty acting too. Not to mention the sets, lighting, costumes and so on. Culture? My list has culture up to your fucking arsehole mate, so cop that! Bet you haven’t heard of half of them – we should have a 3 day weekend and watch them all, because you need an education, my dear friend!

Thanks, Steve (I think).

My choices were based on what I call watchability, the entertainment value that makes you want to watch a film again and again. Citizen Kane may be a great film but I have never felt tempted to watch it more than once. On the other hand, Blues Brothers, Love Actually . . .

Some of yours qualify on the watchability scale, Steve.  Monty Python will be on the next list, as maybe will The Great Escape and Blazing Saddles.   Bohemian Rhapsody was overrated, The Birds is basically a watch once, as is Misery . . . I could go on but your list is an Okay Ten + A Lot More.

We shall continue the debate in person over a glass of red.

In response to the A P Herbert transcript of Sir Ethelred Rutt’s address to the jury:

That transcript is one of the funniest things I have read in a long time.

If I end up in court with a jury I want Sir Ethelred Rutt please.

And another from Steve M in relation to my post about theculinary delight of a slice of bread folded diagonally over a barbecued sausage with tomato sauce and fried onions, ie a sausage sandwich:

Your sausage Bytes reminded me of a constant issue in my life – sarnies, or as posh people like what you are would say – sandwiches.

But: if you cut the sandwich in half (for heathen readers, only cut diagonally please!)you have two sandwiches, or if you are really posh you can cut your original sandwich into four pieces and get four sandwiches (or do you still have one sandwich, cut in half or cut in four? So you offer the plate of sandwiches to someone and say “Would you like a sandwich?” what do they take, all the pieces or one?

This is a major dilemma, an issue of national importance, and one which might well involve HRH herself! If Lord of the Bytes can’t solve it, I may well have to speak to the Palace myself.

Thanks, Steve, it is interesting to note how sedat,e things must be in Chez M  when these are the issues that keep you awake at night!

A sandwich is a food typically consisting of vegetables, sliced cheese or meat, placed on or between slices of bread, or more generally any dish wherein two or more pieces of bread serve as a container or wrapper for another food type.

In the United States, a court in Boston, Massachusetts, ruled in 2006 that a sandwich includes at least two slices of bread and "under this definition, this court finds that the term 'sandwich' is not commonly understood to include burritos, tacos, and quesadillas, which are typically made with a single tortilla and stuffed with a choice filling of meat, rice, and beans." The issue stemmed from the question of whether a restaurant that sold burritos could move into a shopping centre where another restaurant had a no-compete clause in its lease prohibiting other "sandwich" shops. (White City Shopping Ctr., LP v. PR Rests., LLC, 21 Mass. L. Rep. 565 (Mass. Super. Ct. 2006)

In the United Kingdom and Australia, the term sandwich is more narrowly defined than in the United States: it refers only to an item which uses sliced bread from a loaf.[citation needed] An item with similar fillings, but using an entire bread roll cut horizontally in half, is always referred to as a roll.

However, by folding the bread over the sausage, am I then not creating the equivalent of a slice of bread above and below the sausage? 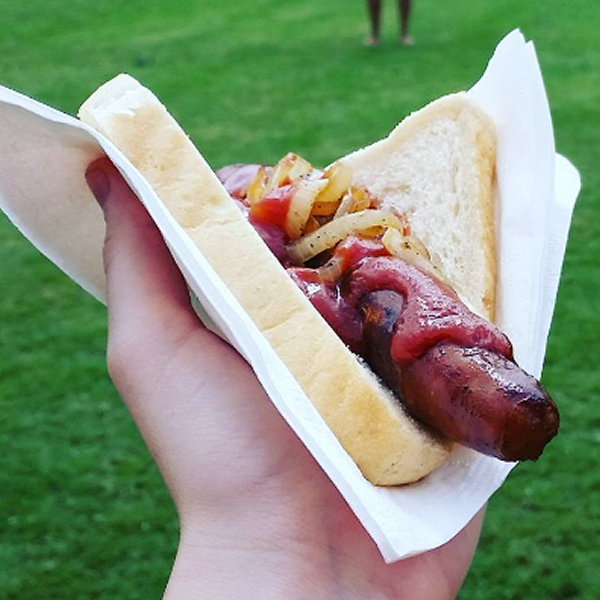 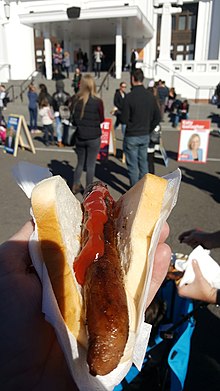 Election booths in Australia are usually in schools, town halls, community halls etc, which gives schools and organisations the oppportunity to have fund raising sausage sizzles.  These election sausage sandwiches are known as "democracy sausages" . . . 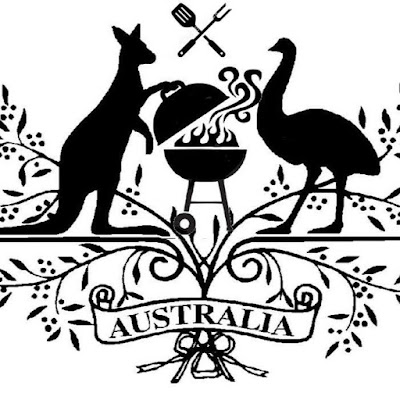 Steve, if you don't call a slice of bread folded over a sausage a "sausage sandwich", what do you refer to it as?

Posted by BytesMaster at 3:16 AM