Today marks the beginning of OPW: Other Peoples’ Week. Readers have sent me emails and links of interest so I will post one each day.

The first batter up is Graham E who sent me an email with pics and a message: “Hi Mr O, Here are some picks that prove China is in a world of its own making!” Thanks, Graham. I had to look into it to satisfy myself that it was true.

Rather than use Graham’s pics, which did not have a commentary, I have reposted photographs and text from Business Insider at:

China has built replica versions of these 17 landmarks 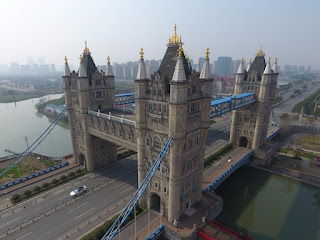 The Chinese Tower Bridge is double the size of the original.

Tower Bridge is arguably one of the capital's most impressive and well-known landmarks.

However, a replica of the bridge exists in China — and it's twice the size.

The structure, which spans a river in the city of Suzhou, is 131 feet tall, and has four turrets instead of two, cost the country more than $11 million to build, according to The Sun.

This isn't the only iconic structure the country has copied.

China is also home to fake versions of the Eiffel Tower, the Sydney Opera House, and the White House. A $194 million life-sized copy of the Titanic is also reported to be in the works.

So how do these knock-offs measure up?

Scroll down to see 17 versions of iconic landmarks from around the world that you can visit in China.
____________

A double-sized replica of London's Tower Bridge exists over Yuanhe Pond in Suzhou, Jiangsu Province. It was built in 2012, but only attracted global attention when new photos were released last month. 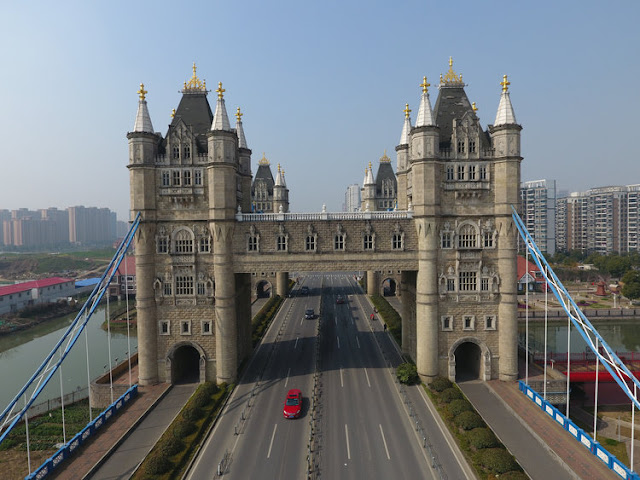 While it does not have a rising bridge, it has a dual carriageway, allowing for more cars in the heavily populated country. 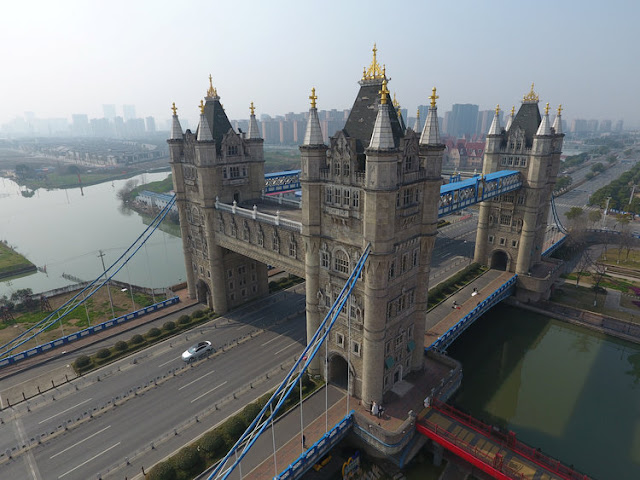 A model of Athens' Parthenon has also been built at a theme park in Lanzhou, Gansu Province. 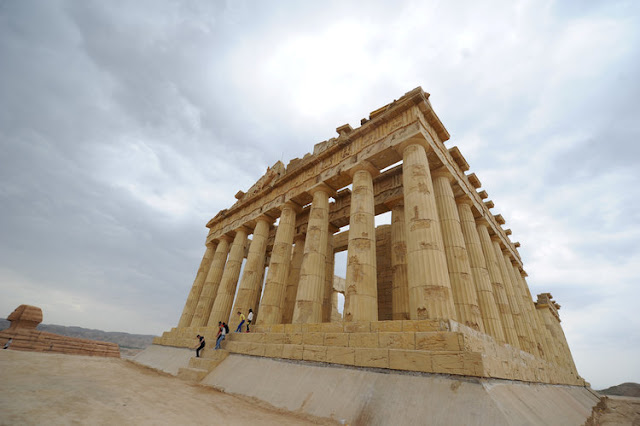 A 354-foot Eiffel Tower rip-off looms over a gated community in Tianducheng, China. 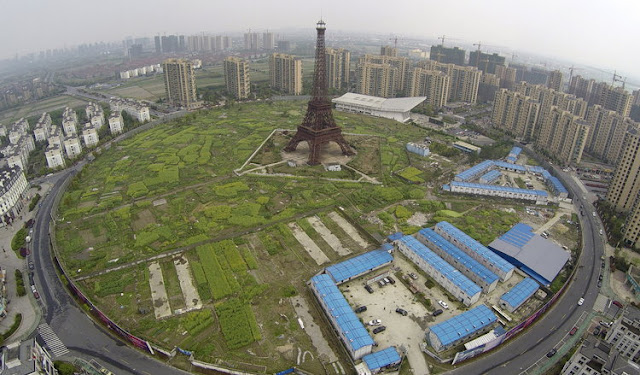 The architecture and landscaping of the area mimics Parisian style. 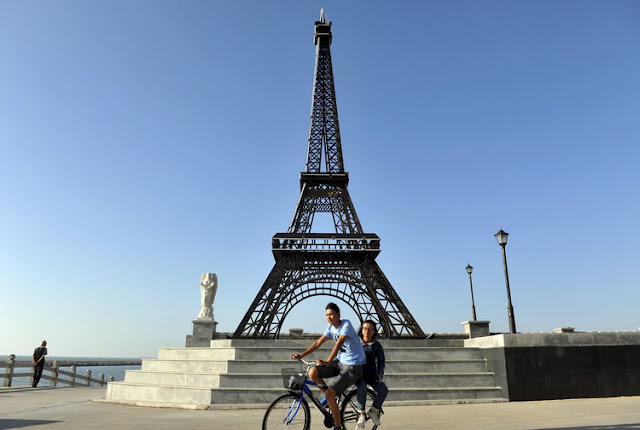 A replica of the Sydney Harbour Bridge in Beijing, China, leads to a fake Sydney Opera House, one of Australia's most beloved pieces of architecture. 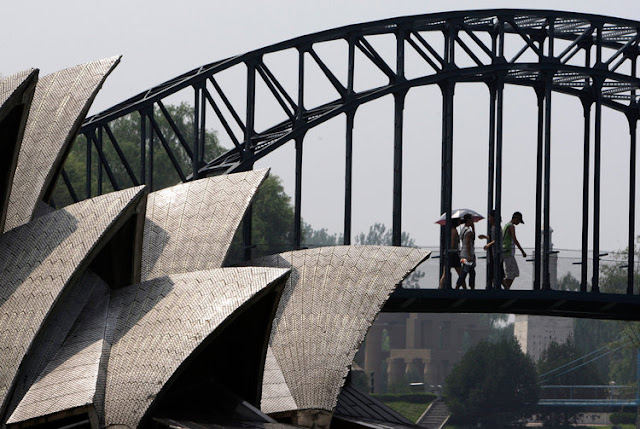 The Roman Colosseum in Macau, China, seats 2,000 people and serves as an outdoor concert venue. 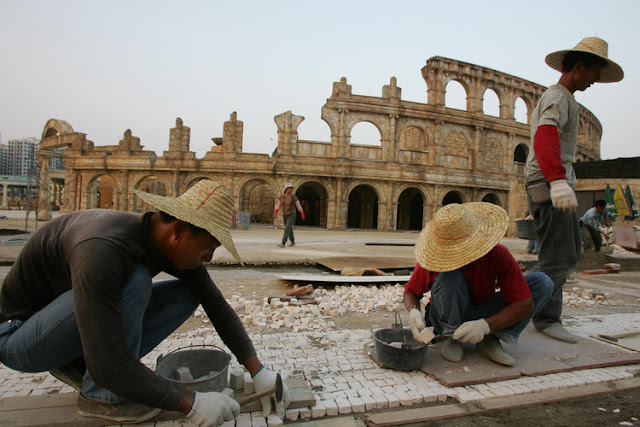 An Arc de Triomphe sits at over 10 meters in height in Jiangyan, China. 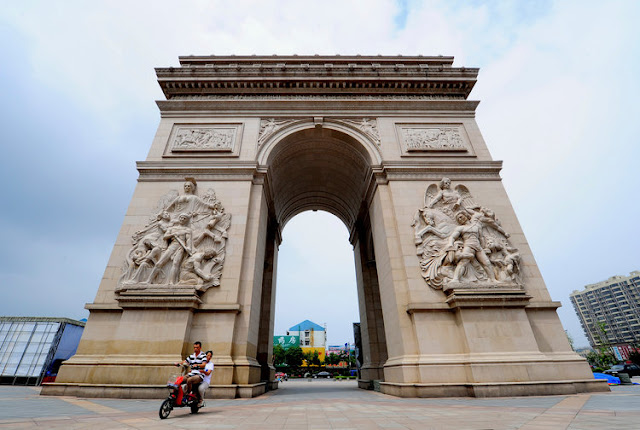 A concrete-poured Great Sphinx of Giza towers over an unfinished theme park in Chuzhou, China. 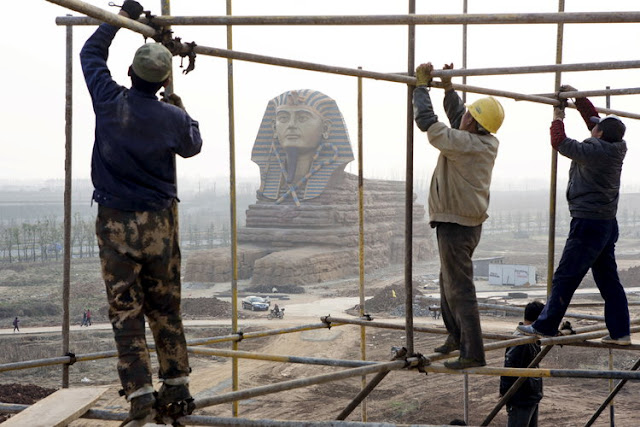 Inspired by Moscow's Kremlin, this white-walled, gold-domed complex in Beijing’s Mentougou district houses several government bureaus and cost up to $3.5 million to build. 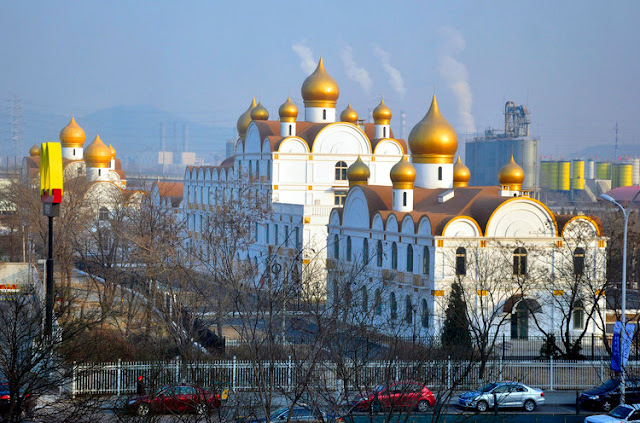 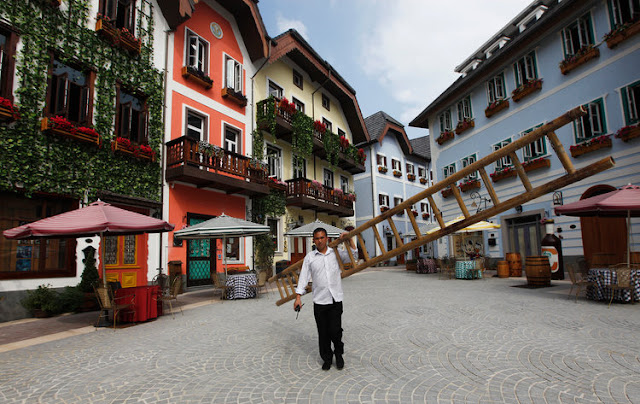 A grand canal even runs through the Florence-inspired village. 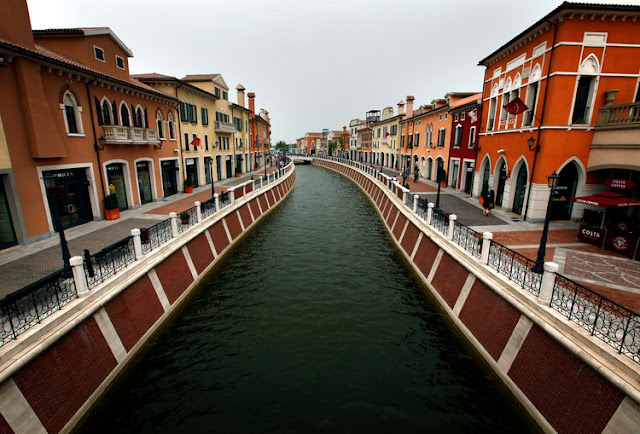 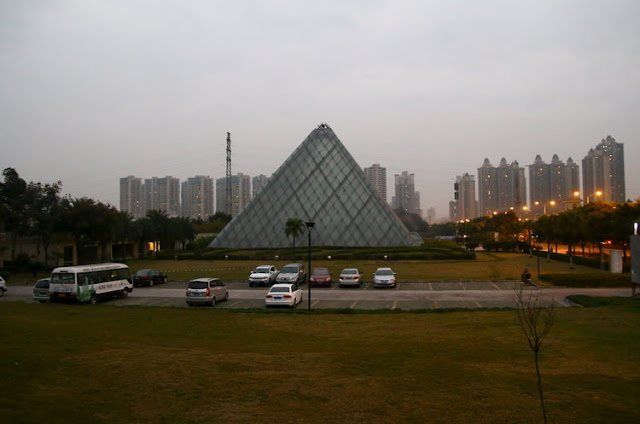 Beijing has its very own White House, sandwiched in a theme park alongside replicas of the Lincoln Memorial, the Washington Monument, and the US Capitol. 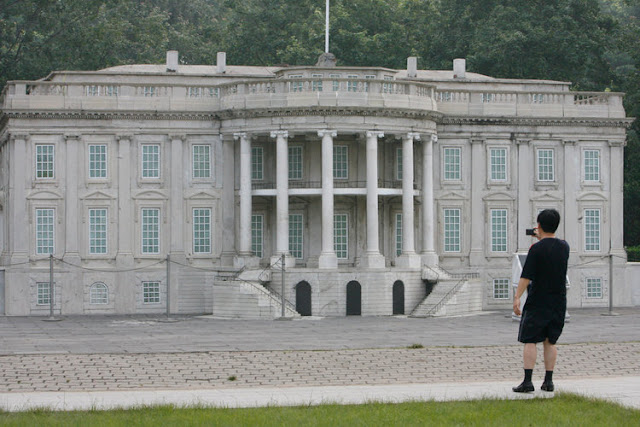 A copy of Egypt's Karnak Temple, located at the abandoned Wanguo Park in Wuhan, China, captures its size and level of detail. 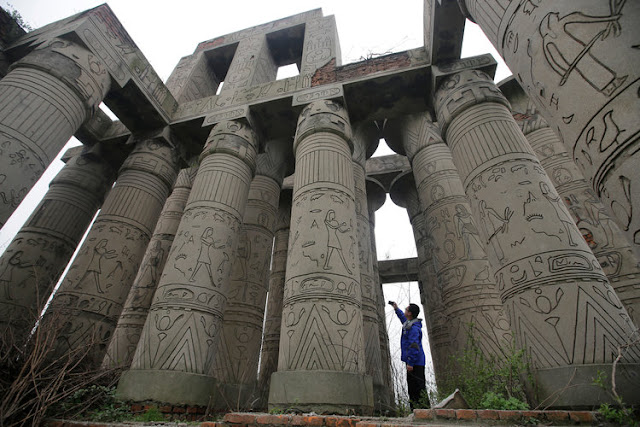 Imitations of the Moai statues on Easter Island line a pedestrian walkway in Beijing's business district. 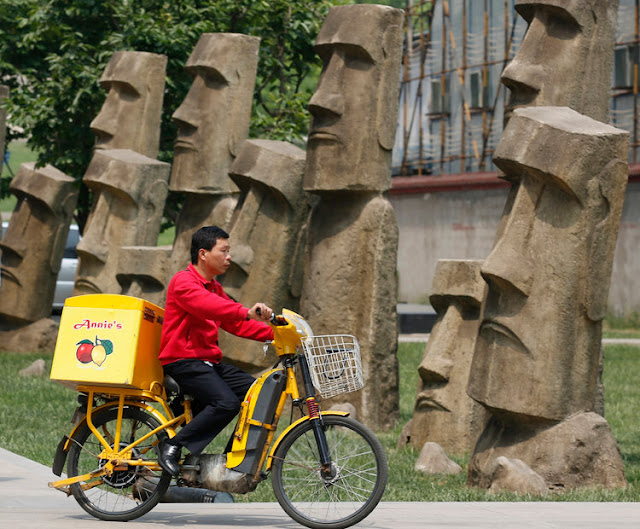 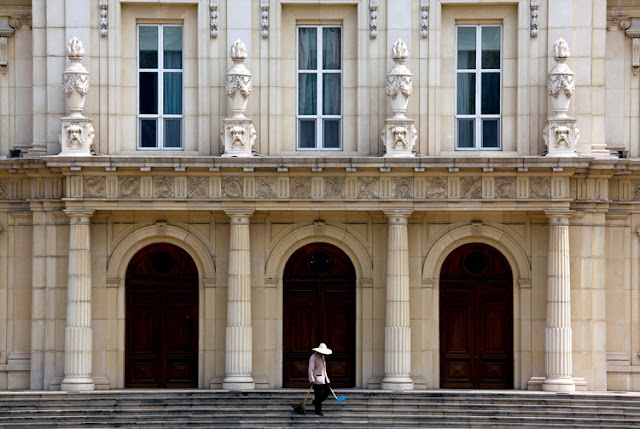 The $940 million Hallstatt community in Huizhou, China, rips off the culture and design of a centuries-old village in Austria. 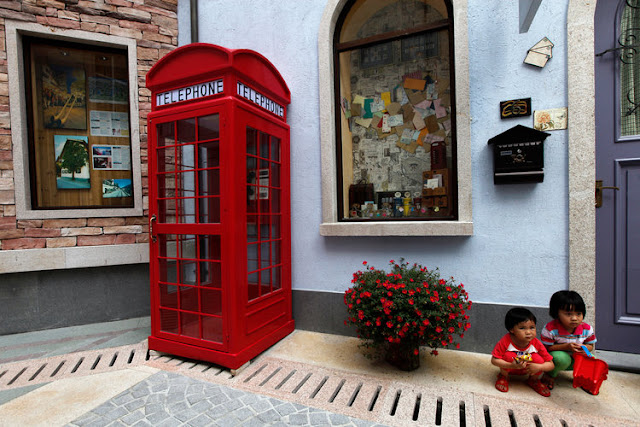 Shanghai's leaning Tower of Pisa is located over 5,000 miles away from the real deal, and yet, tourists take the same types of cheesy photos with it. It's a small world. 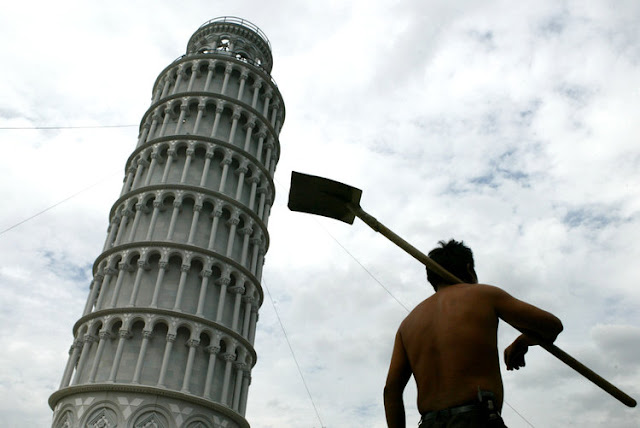 Posted by BytesMaster at 2:46 AM