Today be International Talk Like a Pirate Day, me hearties, so its time to parley, which be noted is a guideline, not a rule. 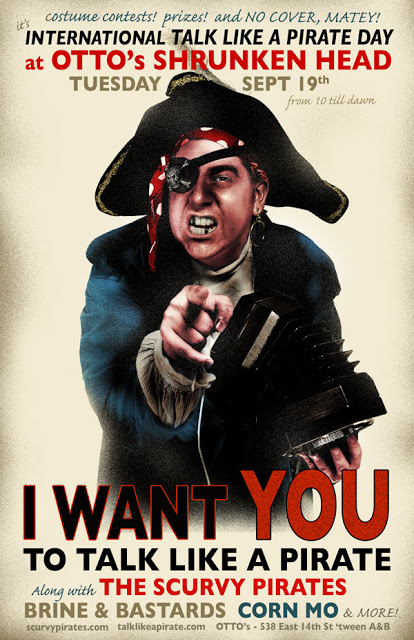 Here be some facts about pirates . . .

Blackbeard was the most feared pirate of all.

Blackbeard (AKA Edward Teach) was known as the most terrifying pirate in the world. Before capturing a ship he would weave hemp into his beard and light it on fire—an intimidation tactic that made him look demonic. 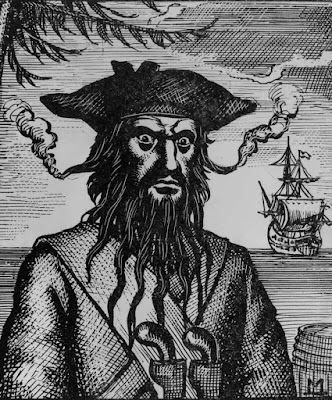 Not every pirate ship used a Jolly Roger flag. 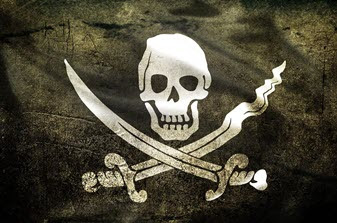 Pirates had their flags specially made by a sail-maker’s widow who took payment in brandy.

Blackbeard/Teach was known to use black flags with death heads and "bloody flags" which were meant to intimidate one's enemies. 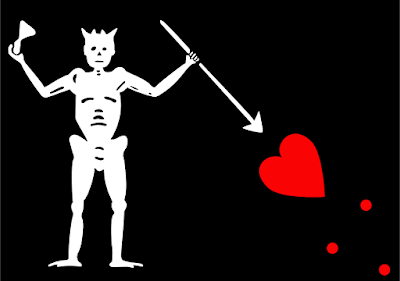 Nevertheless, the flag which is commonly attributed to Blackbeard (pictured above) depicting a skeleton spearing a heart, while toasting the devil,[ was probably never actually used by him.

There were women pirates, too.

Being a pirate wasn’t just for men. Here are the Top 10 Women Pirates:

Sadie the Goat –
Operating in America during the 19th Century, Sadie Farrell, known as Sadie the Goat, was a New York gang leader and river pirate. She left her home town of Manhattan following a brawl which resulted in her ear being bitten off. From them on Sadie wore the ear around her neck in a locket, and worked as a pirate on the Hudson and Harlem Rivers, earning the name ‘Queen of the Waterfront’.

Teuta of Illyria –
One of the earliest known female pirates was Teuta of Illyria. Not only was this powerhouse of a woman a pirate, but she was also a queen! After her husband’s death in 231BC, Teuta became queen regent. She encouraged piracy as a way of fighting back against the surrounding, more powerful, countries.

Maria Lindsey –
Maria Lindsey met notorious pirate captain, Eric Cobham, and it was love at first sight. Cobham revealed his profession to Maria, but she was not put off – in fact they were married the next day! The two left Maria’s hometown of Plymouth and spent around 20 years sailing the seven seas as swashbucklers.

Grace O’Malley –
Grace O’Malley was a fiery red head, born in Ireland in 1530. She was known as a pirate and a trader… she even got to meet Queen Elizabeth I! Unlike most pirates she lived a long life, sailing the sea for most of it. She eventually died around the age of 70 – an impressive age for any buccaneer!

Charlotte de Berry –
Charlotte de Berry was supposedly born in 1636, although there were no known records of her until exactly one hundred years later, leading to many believing that she never existed and is purely fictional. Tales tell how she stowed away on a ship disguised as man, and eventually climbed the ranks to become a captain.

Lady Mary Killigrew – A few generations before Elizabeth Killigrew, came Lady Mary Killigrew. Mary husband, Sir Henry, a retired pirate, was tasked by the queen to suppress piracy in the waters. While her husband was away, Mary would indulge in piracy herself, using the staff of her castle to crew her ship.

Mary Read –
Mary Read, sometimes operating under the alias of Mark Read, was one of the famous female crewmates of Calico Jack. Dressed as a boy, Mary joined the Army before sailing to the Caribbean and becoming a buccaneer. When captured by a pirate hunter in 1720 she avoided hanging by pleading pregnancy, however she died in prison shortly after from fever.

Madame Cheng –
One of the most successful pirates of the 19th Century, Madame Cheng (Ching Shih) commanded well over 300 ships, with approximately 3500 pirate followers – these included men, women, and even children, the largest army of any pirate… ever! Like Grace O’Malley, Cheng also lived to an impressive age – she reired from piracy and eventually died in 1844 at the age of 69.

Anne Bonny –
At the top of the list is Anne Bonny, probably the most famous female pirate to sail during the Golden Age. She was a member of Calico Jack’s crew, along with Mary Read, but it is said that the two women fought with more skill than any man on board the ship. It was even left to Anne and Mary to defend the drunken male crew when their ship was boarded by pirate hunters. It is said that Anne’s final words to her captain and lover, Calico Jack, were ‘If you had fought like a man, you would not be hanged like a dog!’

Grog was the pirate’s drink. 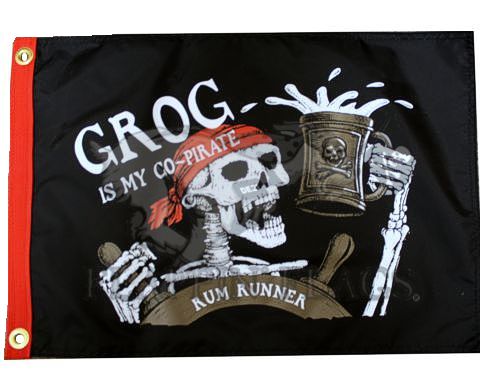 Grog—a mixture of rum, water, lemon juice, and sugar—was the drink of choice for pirates. 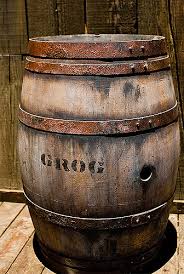 The word originally referred to a drink made with water and rum, which British Vice admiral Edward Vernon introduced into the naval squadron he commanded in the West Indies on 21 August 1740. Vernon wore a coat of grogram cloth and was nicknamed Old Grogram or Old Grog.

Pirates did have eye patches. It’s been said that pirates wore eye patches to help keep one eye adjusted to night vision for seeing below deck.

A pirate strolls into his favorite bar and the bartender says, "Whoa, dude, what happened to you?"
The pirate says, "What do you mean?"
The bartender says, "Well, for starters, you never used to have a peg leg."
"Oh, that," replies the pirate. "Well, you see, we had a sea battle and a cannon ball blew off my leg. But the ship's surgeon fixed me up with this peg leg and I'm as good as new."
"Well, what about the hook?" asks the barkeep.
"We had another sea battle and some guy lopped off my hand," the pirate explains, "but the ship's surgeon fixed me up with this hook and now I'm as good as new!"
"What about the eye patch?" asks the bartender.
"One day I was on the top mast keeping watch," says the pirate, "when an albatross flew over and pooped in my eye."
The bartender is incredulous. "You mean to tell me that bird poop will put out your eye?"
"Well," the pirate explained, "this happened shortly after I got the hook."

Although walking the plank is common in contemporary pirate lore, most pirates just killed people straightaway. When they did torture their prisoners, it was usually through keelhauling (dragging a tied sailor in the water from the back of the ship), marooning a person on a deserted island or remote sandbar, or lashings with a leather whip.

Each pirate ship had its own set of rules and code. 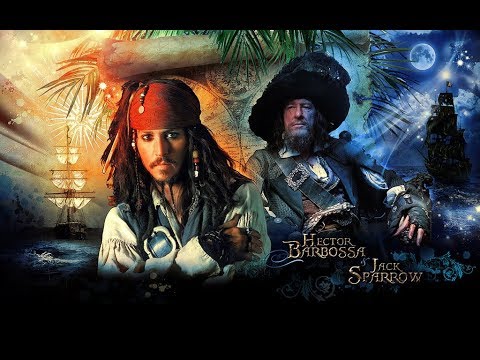 Almost every pirate ship had their own set of guidelines that all pirates had to agree to. This included how the loot would be divided, who had what chores, and what was expected of everyone. The most common rules was no fighting on-board!