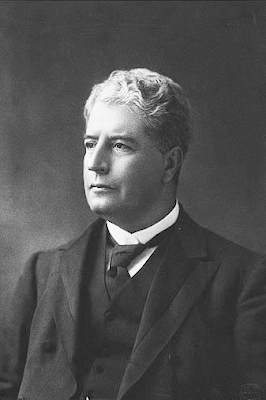 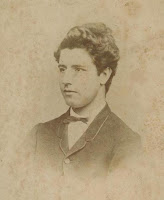 Edmund Barton at age 17
(Click on photos to enlarge).
Sir Edmund Barton, the first Prime Minister of Australia, was born in Glebe, the son of a stockbroker. Educated at Fort Street High School and Sydney Grammar School, he subsequently graduated from the University of Sydney and became a barrister. In 1879 Barton was elected to the NSW State Parliament, becoming Speaker in 1882. In 1889 he became Attorney General.
An early supporter of federation, he was a delegate to the 1891 National Australasian Convention where he declared his support for the principle that “trade and intercourse…shall be absolutely free” in a federal Australia. He also advocated that both the upper and lower house of a federal parliament should be representative and that appeals to the Privy Council should be abolished. Barton took part in drafting a constitution which ended up being substantially similar to that adopted in 1900.
Barton lost his seat in 1894 and did not stand for re-election in 1895 because of the need to provide for his large family, parliamentarians then not being paid. Nonetheless he continued to advocate federation and between 1893 and 1897 spoke at over 300 meetings. At one meeting, in Ashfield, he made a statement widely quoted: "For the first time in history, we have a nation for a continent and a continent for a nation". By 1897 he was the acknowledged to be the leader of the federal movement in Australia.
A referendum to adopt the federal constitution passed in 1899, with federation scheduled to take place on 1 January 1901. However, elections were not to be held until March 1901. Instead of appointing the leader of the majority party in the House of Representatives to be Prime Minister, the newly appointed Governor General John Hope, 1st Earl of Hopetoun, appointed the Premier of the most populous state, New South Wales, to form an interim government. In what has become known as Hopetown’s Blunder, he bypassed Edmund Barton and appointed Sir William Lyne, a staunch opponent of federation. The Bulletin editorialised: "Among the men who can claim by merit or accident, to be front-rank politicians of Australia, Lyne stands out conspicuously as almost the dullest and most ordinary.” Lyne was unable to obtain the support of the leaders of the other states and was obliged to return his commission to Hopetoun, who then appointed Barton as Prime Minister. Barton was successful in forming a government and he and his ministry were sworn in on 1 January 1901 by Lord Hopetoun in Sydney’s Centennial Park. This was the moment that the Commonwealth of Australia came into being.

Sydney's Centennial Park at the inauguration of the Commonwealth of Australia. 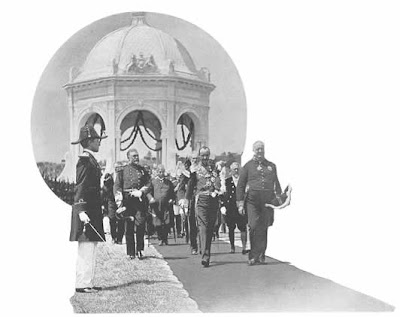 The new Prime Minister Edmund Barton (third from left) and Governor-General Lord Hopetoun (third from right) leave the rotunda in Centennial Park
The Federal Pavilion in which the swearing in and inauguration took place was purchased by Concord Council in 1903 and relocated to Cabarita Park, where it remains to the present day. 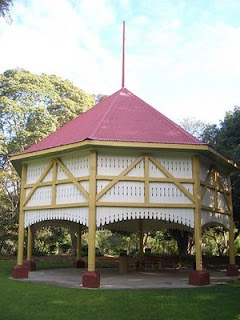 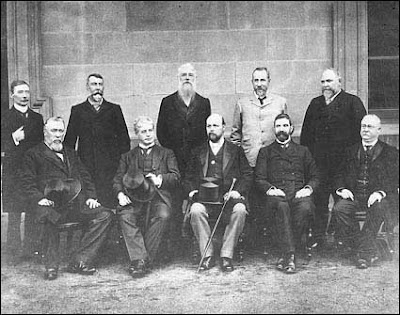 The first and second Prime Ministers of Australia, Edmund Barton and Alfred Deakin, amongst the 1901 cabinet
Barton was elected to the seat of Hunter in the March 1901 elections. His Protectionist Party was able to form a government with the support of the Labor Party.
One of the first pieces of legislation passed by the Barton government was the Immigration Restriction Act, putting into law the White Australia Policy. Although part of the deal for the Labor Party’s support for the Protectionist Party was the restriction of immigration from Asia, that policy was also part of Barton’s own political platform. In his election campaign he had declared “The doctrine of the equality of man was never intended to apply to the equality of the Englishman and the Chinaman". On the plus side, women were allowed to vote in the 1902 elections.
In government Barton was a moderate conservative. In his personal life he was jovial and fond of long dinners and good wines, being nicknamed "Toby Tosspot" by the Bulletin.
For much of 1902 he was in England for the coronation of King Edward VII.
In 1903 he left Parliament to become one of the founding justices of the High Court of Australia, where was also a moderate conservative. Respected as a good and impartial judge, he sought to preserve the autonomy of the States. 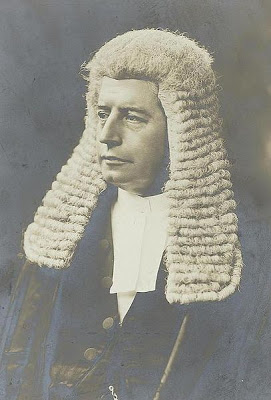 Barton died of heart failure in 1920 at the Hydro Majestic Hotel in Medlow Bath and is buried in Waverley Cemetery. 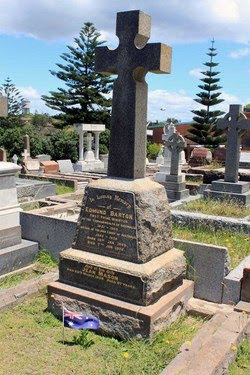 Posted by BytesMaster at 9:09 PM