In case you missed it: Mohamed Fayed and memorials, SMH 23 August 2010 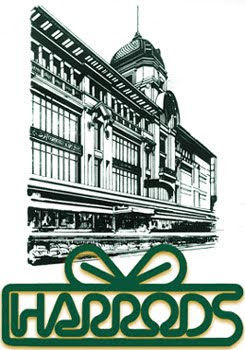 A story in the Sydney Morning Herald reports that Mohamd Fayed, the former owner of Harrods. the exclusive department store in Knightsbridge, London, is of the opinion that royal warrants were a curse on the store.  A royal warrant is the right to advertise that the holder provides to the Royal family.
Mr Fayed, the father of Dodi Fayed,  steps down as the honorary chairman of Harrods in November after selling the company to the Qatari royal family for £1.5 billion ($2.6 billion).

In a letter to the Sunday Telegraph in London he also raised the issue of the memorial in Harrods to Dodi Fayed and Lady Diana, Princess of Wales*.  The newspaper reports:

...Mr Fayed, 77, calls for the store's owners, who enjoy close links to the royal family, to retain the two memorials he erected in the store to his son and the late princess. It had been reported that the Qataris were considering their removal.
''Unless and until this country gives the Princess the thanks and devotion she deserves in the form of a fitting public memorial, this statue, Innocent Victims, should remain to remind the world of what was lost when two young people, on the brink of happiness together, were killed,'' he wrote.
He did not say whether he had been given any assurances by the Qataris about the future of the bronze statue, which was erected in 2005, and another pyramid-shaped display.
He said: ''It is the only memorial to the Princess in the country, if one discounts the misconceived municipal water works in Hyde Park that every year causes casualties among the children who slip over when paddling in it.''
A spokesman for Harrods said no decision had been made about the memorials.
http://www.smh.com.au/world/fayed-says-royal-warrants-were-a-curse-on-his-department-store-20100822-13atm.html

Following are some photos of the statue Innocent Victims (click on the pics to enlarge): 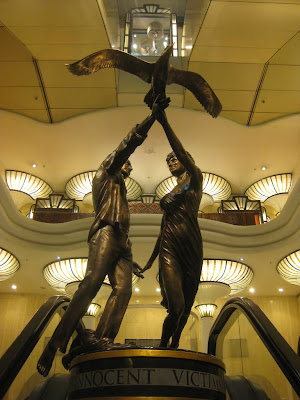 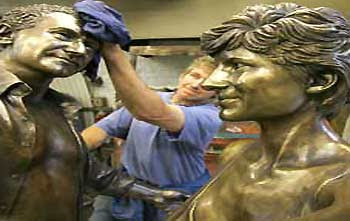 The bronze statue shows Dodi and Diana dancing on a beach beneath the wings of an albatross. The albatross is a bird that is said to symbolise the "Holy Spirit". According to M ohamed Fayed, he wanted to keep the "pair's spirit" alive through the statue.  It was unveiled in 2005. The sculpture was created by 80 year old Bill Mitchell who is a close friend of Fayed and who has been the artistic design advisor to Harrods for 40 years.
The other memorial in the store is from 1998.  It features photographs of the two behind a pyramid-shaped display which holds a wine glass smudged with lipstick from Diana's last dinner  and what is described as an engagement ring Dodi purchased the day before they died. 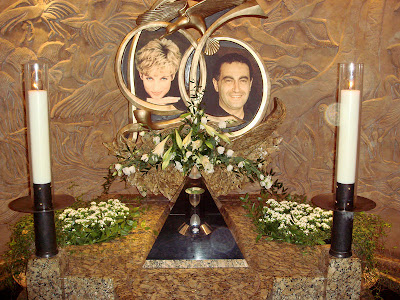 *Because Lady Diana was not of royal blood, she could not be called Princess Diana.  Her correct title was Lady Diana, Princess of Wales.
Posted by BytesMaster at 9:45 AM