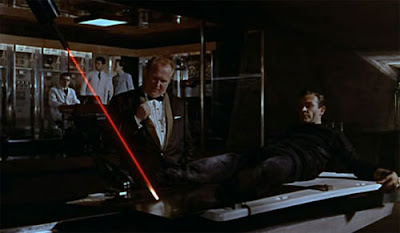 James Bond to Auric Goldfinger, as he is about to be cut in half by a laser:
“Do you expect me to talk?”
Goldfinger:
“No, Mr Bond, I expect you to die.”
One of the greatest quotes from Bond movies. See it at:
http://www.youtube.com/watch?v=U1TmeBd9338&feature=related
But did you know there really was a Goldfinger?
Ian Fleming, the author of the James Bond novels, lived next door in Hampstead to an architect, Erno Goldfinger. Erno had built his home next to Flemings and, in so doing, had destroyed Victorian terraces. In addition, Fleming disliked the modernist architectural style, as well as the man personally. Erno was a bully, an eccentric and pro-Communist. An advocate of concrete tower blocks, he was also responsible for designing some of the most reviled buildings in London.
When, in 1959, Fleming needed a new villain, he named him Auric Goldfinger. “Auric” is a genuine word meaning pertaining to gold. James Bond fans know that the fictional Goldfinger is a megalomaniac who tries to steal the gold in Fort Knox for the Soviet Union. He is the richest man in England, the treasurer of Smersh and he cheats at golf.

Erno’s business partner, Jacob Blacker, read a proof copy and told Erno that he could find only one noticeable difference: "You're called Erno and he's called Auric."
Erno was not a happy chap. He saw his solicitors who in turn contacted the publisher, Jonathon Cape. A settlement was finally agreed upon: Cape would pay Erno Goldfinger’s costs and it would be made clear in advertising and future editions that all characters were fictitious. When used in the book, the name Goldfinger would be preceded by the name Auric.
Fleming was hostile to the settlement. He wanted an erratum slip placed in all current editions correcting the name “Goldfinger” to “Goldprick” and for the name to be changed in future editions. Jonathon Cape would not agree and the name remained at Goldfinger. In 2002 the Austin Powers movie took up the concept with a character “Goldmember”, who lost his genitals in a smelting accident and had them replace with a gold key.
And what of Erno? Erno, who died in 1987, and his family were listed in the phone book and remain so to this day. They are regularly telephoned by callers in the middle of the night who say in bad Sean Connery accents, "Goldfinger? This is agent 007," or sing the film's theme tune. 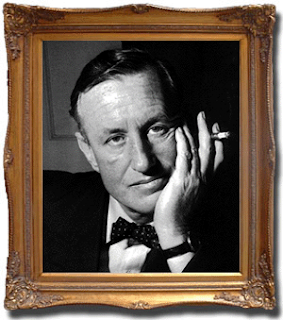 Email ThisBlogThis!Share to TwitterShare to FacebookShare to Pinterest
Labels: Goldfinger