In case you missed it, the following is an article that appeared in the online Sydney Morning Herald on Wednesday, reprinted from the Telegraph, London...
King's 12th wife caught cheating on him
August 4, 2010
Johannesburg 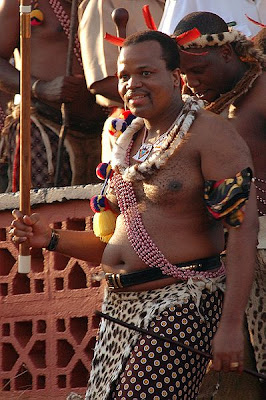 The 12th wife of the King of Swaziland, a former Miss Teen beauty contestant, has been placed under house arrest after she was allegedly caught with her lover, the Justice Minister.
Mswati Nothando Dube, 22, and the married minister, Ndumiso Mamba, were reportedly discovered by police in what is thought to have been a ''sting'' operation at the Royal Villas hotel in a town near Mbabane, the kingdom's capital.
With King Mswati III, 42, away on a state visit to Taiwan, she has reportedly been placed under surveillance at her mother-in-law's home and Mr Mamba is in jail on the king's orders.
Political commentators said the alleged affair was ''common knowledge''. Royal sources have said the king's mother - who shares power with her son and is known as the Indlovukazi or Great She-Elephant - had sent a delegation to Mr Mamba's village to lay charges of ''trespassing into another man's home''. He is known to have been a close friend of the king as well as his Minister for Justice and Constitutional Affairs.
Miss Dube first caught the king's eye when she was 16 at the annual Reed Dance, when tens of thousands of topless Swazi virgins pay homage to the monarch. Inkhosikati LaDube, as she became known, bore him a daughter within a year and a son soon afterwards.
Lucky Lukhele, of the pressure group Swaziland Solidarity Network, predicted that, if the charges were proved, Mr Mamba would get the death sentence and Miss Dube would be banished.
Telegraph, London
__________________

In Swaziland no king can appoint his successor. Only an independent special traditional Council called the Liqoqo decides which of the wives shall be "Great Wife" and "Indlovukazi" (She-Elephant / Queen Mother). The son of this "Great Wife" will automatically become the next king.

The "Great Wife" must only have one child who is a boy (A king cannot have a sister or a brother) and be of good character. Her character affects her child's chances of ascending to the status of king. According to Swazi culture, a son cannot be the heir if his mother is not of good standing. She must not bear the maiden name of Nkhosi-Dlamini and she must not be a ritual wife (i.e. the eldest son is never the heir).

Email ThisBlogThis!Share to TwitterShare to FacebookShare to Pinterest
Labels: Swaziland