Sherlock Holmes took his bottle from the corner of the mantel-piece and his hypodermic syringe from its neat morocco case. With his long, white, nervous fingers he adjusted the delicate needle, and rolled back his left shirt-cuff. For some little time his eyes rested thoughtfully upon the sinewy forearm and wrist all dotted and scarred with innumerable puncture-marks. Finally he thrust the sharp point home, pressed down the tiny piston, and sank back into the velvet-lined arm-chair with a long sigh of satisfaction.

"It is cocaine," he said, "a seven-per-cent solution. Would you care to try it?"


-  Arthur Conan Doyle, The Sign of Four (1890)
Yesterday I posted an advertisement for Cocaine Toothache Drops and mentioned that some weird and not so wonderful items were included in pharmaceuticals around the turn of the century.
Over the next few days I will present some more in that vein (ha ha).
Today, more about the use of cocaine in medicines, pharmaceuticals and drinks.
From the days of the Incas, coca leaves had been used as a medicine and anaesthetic. In addition, coca leaves, which contain cocaine, acted as a stimulant and as an appetite suppressor. It also produced euphoria and gave strength and energy to workers engaged in physical labour. In 1609, Padre Blas Valera wrote:

“Coca protects the body from many ailments, and our doctors use it in powdered form to reduce the swelling of wounds, to strengthen broken bones, to expel cold from the body or prevent it from entering, and to cure rotten wounds or sores that are full of maggots. And if it does so much for outward ailments, will not its singular virtue have even greater effect in the entrails of those who eat it?”

In 1855 scientists first isolated the cocaine alkaloid, the name "cocaine" being coined by Albert Niemann, who developed a more advanced purification process in 1860.
The use of cocaine escalated as people became aware of its properties, the cocaine being used both in its isolated form and in processes using the coca leaf.
A French chemist, Angelo Mariani, was the first to bring the coca leaf to the general public. He marketed a wine called Vin Mariani, which been treated with coca leaves, to become cocawine. The ethanol in the wine acted as a solvent and extracted the cocaine from the coca leaves, altering the drink’s effect. The wine contained heavy quantities of cocaine as a result. Although Mariani began exporting to the US in 1891, similar drinks were already being locally produced and sold. To compete with them Mariani had to boost the cocaine content from 6 mgs to 7.2mgs per fluid ounce. It is also notable for being the ancestor of Coca Cola. Vin Mariani was extremely popular and was used by such notables as as Queen Victoria, Pope Leo X111, Pope Pius X and Thomas Edison, who claimed it helped him stay awake for hours. Leo Tolstoy called it “the Elixir of Life, which combats human debility, the real cause of every ill—a veritable scientific fountain of youth, which in giving vigor, health and energy would create an entirely new and superior race.” Pope Leo awarded a Vatican gold medal to the wine, and also appeared on a poster endorsing it: 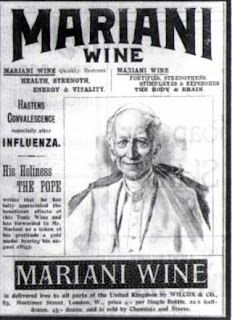 (Click on images to enlarge).
Compare it with another early Vin Mariani advertisement: 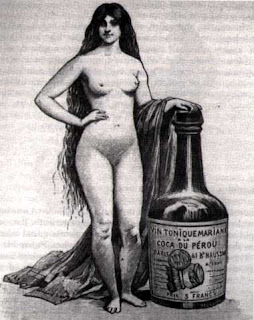 With no laws to restrict the consumption or sale of cocaine, its use in the late 19th century flourished.
Cocaine was freely available in drug stores, saloons, from mail-order vendors, and even in grocery stores. One drug manufacturer, in 1885, was selling cocaine in 15 different forms, including cigarettes, cheroots, inhalants, cordials, crystals, and solutions.
It was used as an ingredient in soft drinks… 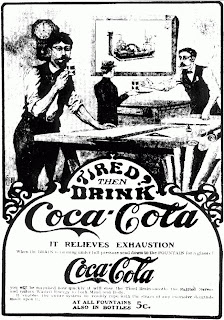 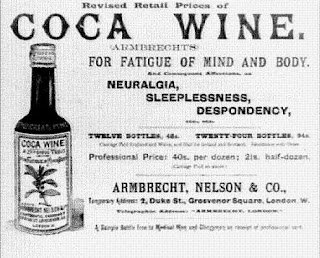 The above coca wine, Maltine, was made by the Maltine Manufacturing Company (New York). The dosage indicated on the back of the bottle reads: "A wine glass full with, or immediately after, meals. Children in proportion." Malt extract was taken for its health-promoting effects and alcohol was considered by many to have medicinal effects. It was therefore not surprising that these three "medicines" were combined into a single product.
Throat lozenges… 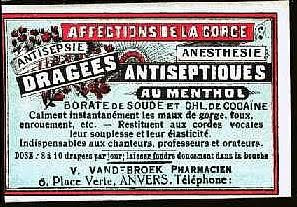 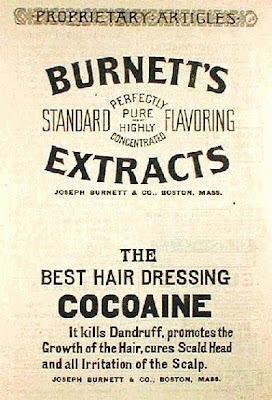 Actually, that’s not true. Cocaine was so popular that some products were poromoted as containing it, even when there was no cocaine in it.  Burnett's Cocoaine above (c. 1880) contained coconut oil, not cocaine, as its primary ingredient. Either deliberately or unintentionally, spellings were made to look like cocaine, even coconut came to be spelt as cocoanut for some products.
In 1885 the U.S. manufacturer Parke-Davis sold cocaine in various forms, including cigarettes and powder. It also sold a cocaine mixture that could be injected directly into the user’s veins with a needle.  The needle came with the mixture. The company promised that its cocaine products would “supply the place of food, make the coward brave, the silent eloquent and ... render the sufferer insensitive to pain.” 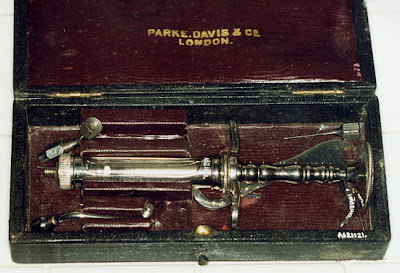 Parke-Davis cocaine injection kit
White employers encouraged use of cocaine by their black labourers.
By the turn of the century, cocaine was coming to be seen as an addictive substance that had its own risks and dangers. In 1903, the American Journal of Pharmacy wrote that that most cocaine abusers were “bohemians, gamblers, high- and low-class prostitutes, night porters, bell boys, burglars, racketeers, pimps, and casual laborers.” Without actually saying so, the implication was that the abusers were mostly black.
In 1914, Dr. Christopher Koch of the Pennsylvania’s State Pharmacy Board made the racial innuendo explicit, testifying that, “Most of the attacks upon the white women of the South are the direct result of a cocaine-crazed Negro brain.”
In the same year, 1914, the Harrison Narcotics Tax Act outlawed the sale and distribution of cocaine in the United States. This law incorrectly referred to cocaine as a narcotic instead of as a stimulant, and the misclassification passed into popular culture.
Posted by BytesMaster at 10:58 PM

Email ThisBlogThis!Share to TwitterShare to FacebookShare to Pinterest
Labels: Cocaine #2